GroundUp: Mkhwebane’s report on Prasa fails to leave the station 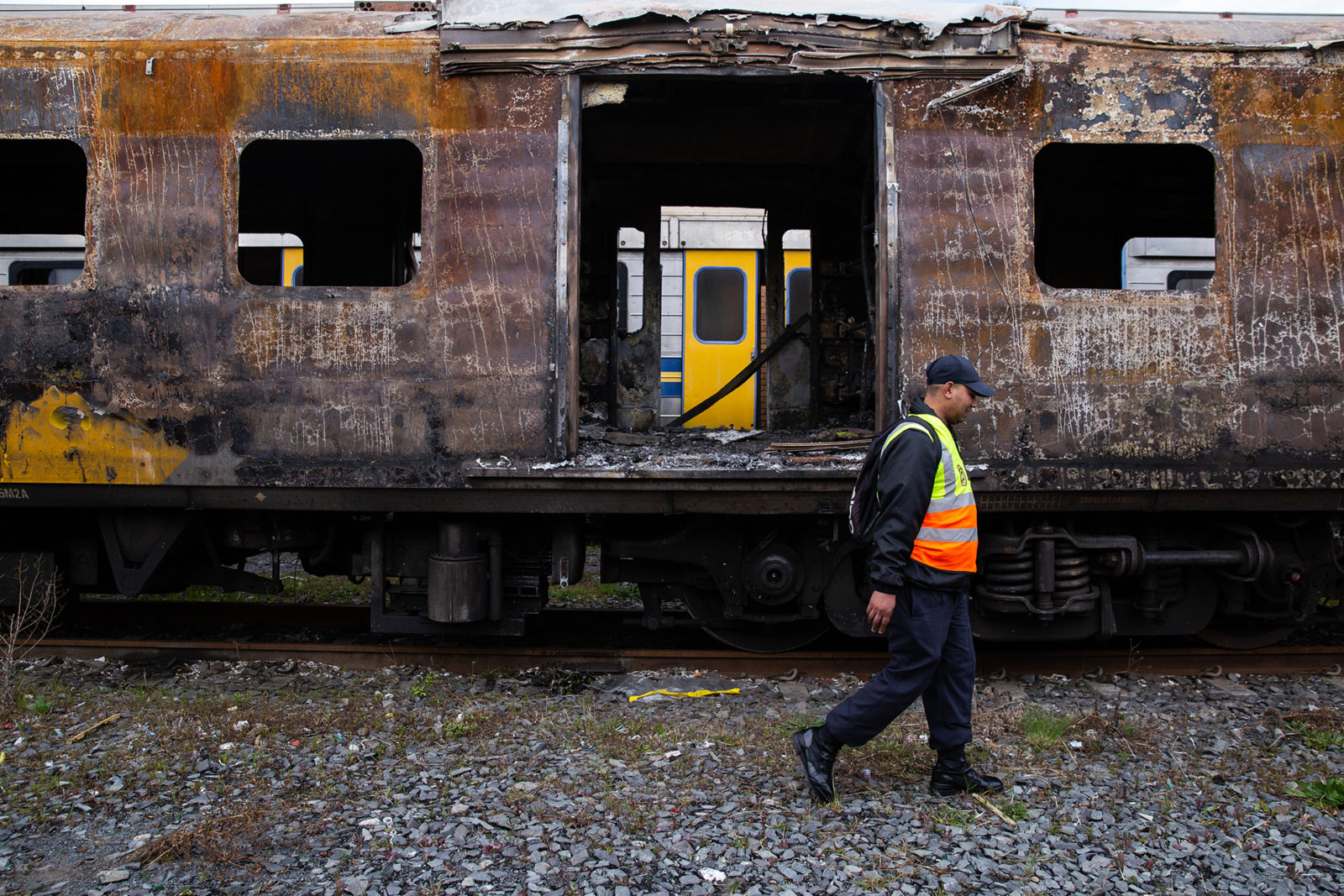 The author takes issue with a recent report by the Public Protector that has let those who looted Prasa off the hook. Archive photo: Ashraf Hendricks Eiland Deport in Cape Town to view damages to the PRASA infrastructure sustained during various arson attacks on Metrorail trains in Cape Town.

Public Protector Busisiwe Mkhwebane’s report on Prasa is fundamentally flawed. It raises the question: Is she incompetent or intentionally failing to take action against corruption?

In April 2019, the public protector, Busisiwe Mkhwebane, released her report on the Passenger Rail Authority of South Africa (Prasa) (the Volume 2 Report). This is the follow-up report to Derailed, her predecessor Thuli Madonsela’s 2015 report on corruption at Prasa.

Volume 2, which was released much more quietly than Derailed, examines eight questions that Madonsela deferred from her 2015 report. The findings, released as part of a batch of 11 reports, were not considered newsworthy, presumably because most of the issues under investigation were more than four years old, and the report itself plumbed no new depths on the grand corruption that has ruined Prasa.

It is #UniteBehind’s view that this report, like many of this public protector’s releases, may be open to legal challenge.

The critique of Volume 2 could extend to hundreds of pages. Here are just some of the anomalies.

Did Prasa improperly make an advance payment to a developer of the City Mall for the construction of an underground train station on the Bridge City Project in KwaZulu-Natal without proper authorisation during the period 2008 to 2010?

Crowie Projects was paid more than R900-million by Prasa in relation to this deal. Mkhwebane finds that this allegation was not substantiated.

But as journalist Steve Kretzmann revealed in June this year, the evidence in the reports commissioned by Treasury and Prasa as part of Madonsela’s remedial action run contrary to this finding. It does not seem as if Mkhwebane is aware of this evidence.

Further, Crowie is involved in a large number of irregular tenders at Prasa through its subsidiary, ENZA Construction. Rowan Crowie is the sole director of ENZA, and director of a number of companies related to the development of Bridge City. These facts are available in the remedial investigations, and should have been considered by Mkhwebane.

She finds that Twala had an interest in a CCTV company but made a disclosure in regard to the CCTV tender. Curiously, she does not name the company in which this interest is held. The major tender involving CCTV cameras from the period is the Siyangena tender, but it is not clear whether Twala has an interest in Siyangena, or in the German CCTV subcontractor Dallmeier, or if this relates to some other company.

We also find a situation in which the public protector neglects the investigations that her office ordered. According to a Werksmans report, Twala’s Tunnel Engineering won business from Prasa under suspicious circumstances. Mkhwebane does not investigate this.

In this case, the public protector decided that because no specific company is involved, this allegation does not warrant further attention. This is in spite of the fact that we know of astonishingly corrupt tenders from that period, like Siyangena.

Mkhwebane finds that this allegation was substantiated.

Something sticks! Mkhwebane finds that due process was not followed and the “procurement was not done in accordance with a system which was fair, equitable, transparent, competitive and cost-effective”.

But, she finds that the mismanagement by the accounting authority Lucky Montana (Prasa head at the time) does not warrant investigation by the police.

Did Prasa improperly appoint Shiela Boshielo, the wife of Bushy Boshielo, the former member of the Prasa Board, as General Manager of Autopax, a Prasa company?

Shiela Boshielo was in fact appointed as general manager of business development at Autopax, a Prasa subsidiary. Her husband was a board member when she was appointed. To this public protector, this does not amount to impropriety. Initially, Montana said that Boshielo had been head-hunted. Later, it was affirmed that she had been appointed through recruitment. But no documents related to other candidates exist.

Did then CEO Lucky Montana improperly take a Blue Train trip to Cape Town with 10 female companions between 24 and 27 September 2009 and return on an SAA flight, at an estimated cost of R170,000 which resulted in fruitless and wasteful expenditure?

Despite finding that Montana lied about the trip in question (specifically the date), Mkhwebane decided that she does not need to interview anyone on the trip to discover what actually happened.

Did Prasa improperly pay salaries to Pule Mabe, its former executive corporate affairs manager during 2008/2009, after his resignation from Prasa, which resulted in fruitless and wasteful expenditure and did Montana mislead the executive committee in that regard?

Apparently, Prasa’s records could not be found in relation to payments to Mabe. Astonishingly, Mkhwebane did not see fit to look at Mabe’s bank records.

Did Prasa board chairperson Sfiso Buthelezi improperly fail to disclose and manage a conflict of interest arising from his interest in Makana, a subsidiary of Cadiz, a company allegedly providing advisory services to Prasa on the Rolling Stock Recapitalisation Project?

A subsequent article will delve into Buthelezi’s business with Prasa while he was chair of the board. For now, we can say that, as in the case of Crowie, Mkhwebane did not examine the evidence of the Treasury or Werksmans reports. She accepts an undated Declaration of Interest form from Buthelezi, when even a cursory director’s search of company records would reveal that this form does not come close to listing all Buthelezi’s business interests. Buthelezi’s companies have ties to Swifambo. None of this apparently matters to the public protector.

In general, the public protector seems to be ignorant of the Werksmans and Treasury reports. She most often relies on the evidence accrued during her predecessor’s investigation and in some cases examines less evidence than Madonsela did. She seems to be ignorant of the data recovery efforts of Werksmans forensic teams (more than a billion digital records were recovered).

But this is not all. Not only has this public protector failed to investigate claims fully; she has also not investigated every claim.

On page 21 of Derailed, Madonsela explains that she had to defer certain findings for a second volume. She lists seven issues, which correspond to the first seven issues listed above. (Buthelezi’s matter is not in this list, but is named as a deferred matter later in the report.)

But there are two other issues that Mkhwebane neglected to address in Volume 2.

On page 5 of Derailed, Madonsela wrote: “During the course of the investigations various allegations regarding victimisation of current and former employees of Prasa were raised by the Complainant and some Executives. I have however decided to defer this issue to be adjudicated upon in volume 2 of this report.”

Volume 2 does not address this at all. The allegations relate to the mistreatment of whistle-blowers at Prasa.

On page 32 of Derailed, Madonsela defers findings about Prasa’s alleged improper award of a tender to Umjanji Consortium, for the Media, Advertising and Broadcasting Concession Agreement. Volume 2 does not address this at all.

Volume 2 is not just a deficient document, it is not even a completed document.

This public protector is submitting unfinished homework. The consequence of this laziness is that the public Mkhwebane is sworn to protect has suffered a further defeat at her hands. DM

Stent is a member of commuter activist group #UniteBehind.