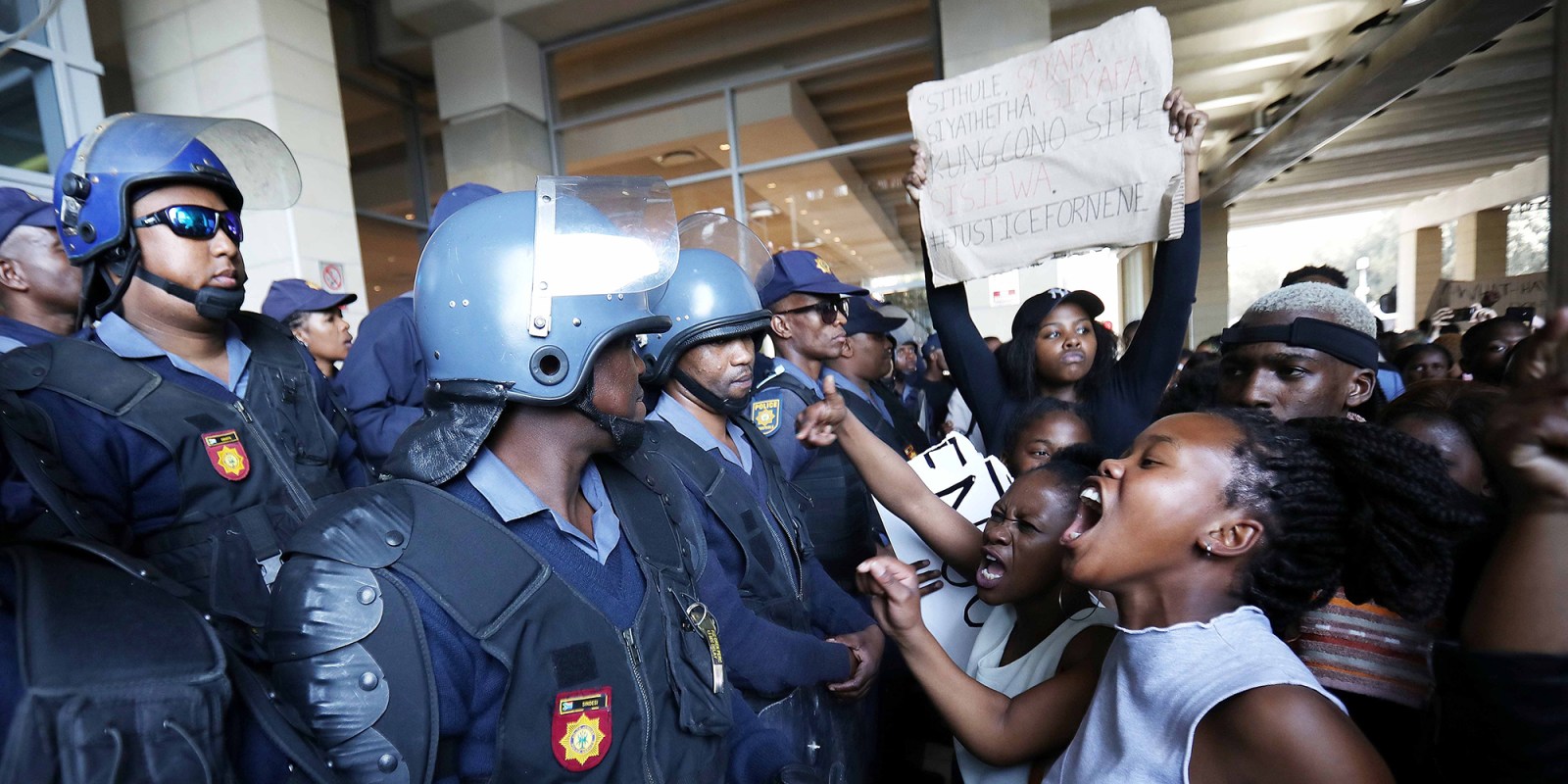 The state has decided not to pursue legal action against any of the 23 protestors arrested during demonstrations last week in Cape Town against gender-based violence.

A total of 23 protesters were arrested in Cape Town between 4 and 6 September during mass protests against gender-based violence. Eleven were arrested on 4 September for contravening the Regulation of Gatherings Act (RGA), 10 were arrested in the following two days for public violence, and another two arrested for assault of a police officer on 5 September.

But on Tuesday the State indicated it would decline to prosecute any of them.

They were due to appear in court on Monday 9 September, but instead were met with the news that they were not being prosecuted and would not have criminal records.

Eric Ntabazalila, regional communications manager for the National Prosecuting Authority, responded to Daily Maverick’s request for information on why the charges were not pursued with the following statement:

“After careful analysis of the evidence and factors of the cases, the State declined to prosecute as there were no prospects of successful prosecution.”

The remaining 12 cases, which were set to be heard on 11 September, were also declared nolle prosequi by Jacobs on 10 September, a day before they were set to go to trial, according to Samaai.

She said, “The prosecutor hands down a nolle [prosequi] and we say thank you very much and move on. Just like that.”

On Wednesday 11 September, the 12 arrested protesters will arrive at court where their legal representation will hand them a symbolic photocopy of their charge sheet with the words nolle prosequi scribbled over the charges. The same happened on 9 September. None of the arrested protesters will appear in court and there will be no formal criminal proceedings against them, Samaai told Daily Maverick.

Samaai, an attorney who has worked with protesters arrested during marches like the #FeesMustFall protests, said about the recent protests and arrests:

“SAPS and the state are not changing in terms of their modus operandi. This was a GBV protest, and the response was disproportionate. They need to fundamentally look at the Gatherings Act and how it is implemented.”

Despite the protesters all gathering to protest the same cause on different days, they were charged with different criminal acts. The first group was charged under section 12(1)(G)(J) of the Regulation of Gatherings Act, while the rest were charged with behaving violently, either in public or towards a police official.

Samaai said the RGA is an incredibly broad act often used as a reason to arrest protesters. She told Daily Maverick she has had many clients charged with contravening the act, and more often than not the prosecutor hands down a nolle prosequi ruling.

The right to protest is enshrined in section 17 of the Constitution. According to Stanley Malematja, attorney for the Right to Protest Project with the Right2Know Campaign, “A constitutional protester is peaceful and unarmed. That’s all.”

In a landmark 2018 judgment, the Constitutional Court ruled that section 12(1)(A) of the RGA was unconstitutional, and as a result groups of more than 15 people do not have to give prior notice if they intend protesting.

Now human rights organisations such as the Right2Know Campaign are working towards having the entire act declared unconstitutional.

“It’s old and it should be over,” said Thami Nkosi, protest and surveillance officer for the Right2Know Campaign. In correspondence with Daily Maverick, Nkosi said, “The jury is still out on the other subsections of the RGA as to how constitutional they are until challenged in a court of law. The assumption that these remain constitutional by virtue of them not having been challenged yet would be disingenuous.”

In response to the two subsections of the RGA, namely section 12(1)(G) and 12(1)(J), Malematja explained that while worded slightly differently, they have a similar outcome:

“Basically, what the two sub-sections are doing is they are suppressing the constitutional right to protest by allowing the police to, at any time, stop a protest whether the protesters are peaceful and unarmed or not.”

Despite a “disproportionate” response from the police, the reaction from civil society in response to the arrests last week was quick and effective, according to Samaai. A call went out on social media, and legal representatives such as Samaai arrived at the Cape Town police station to offer assistance.

“The HRC officials had access to the cells, to make sure that they were being treated humanely. They had access that we as lawyers would never have, and that helped so much,” Samaai told Daily Maverick.

Daily Maverick attempted to contact SAPS for comment on the State opting to nullify the cases, but at the time of publishing had not yet received a response. DM