IN A GALAXY FAR, FAR AWAY 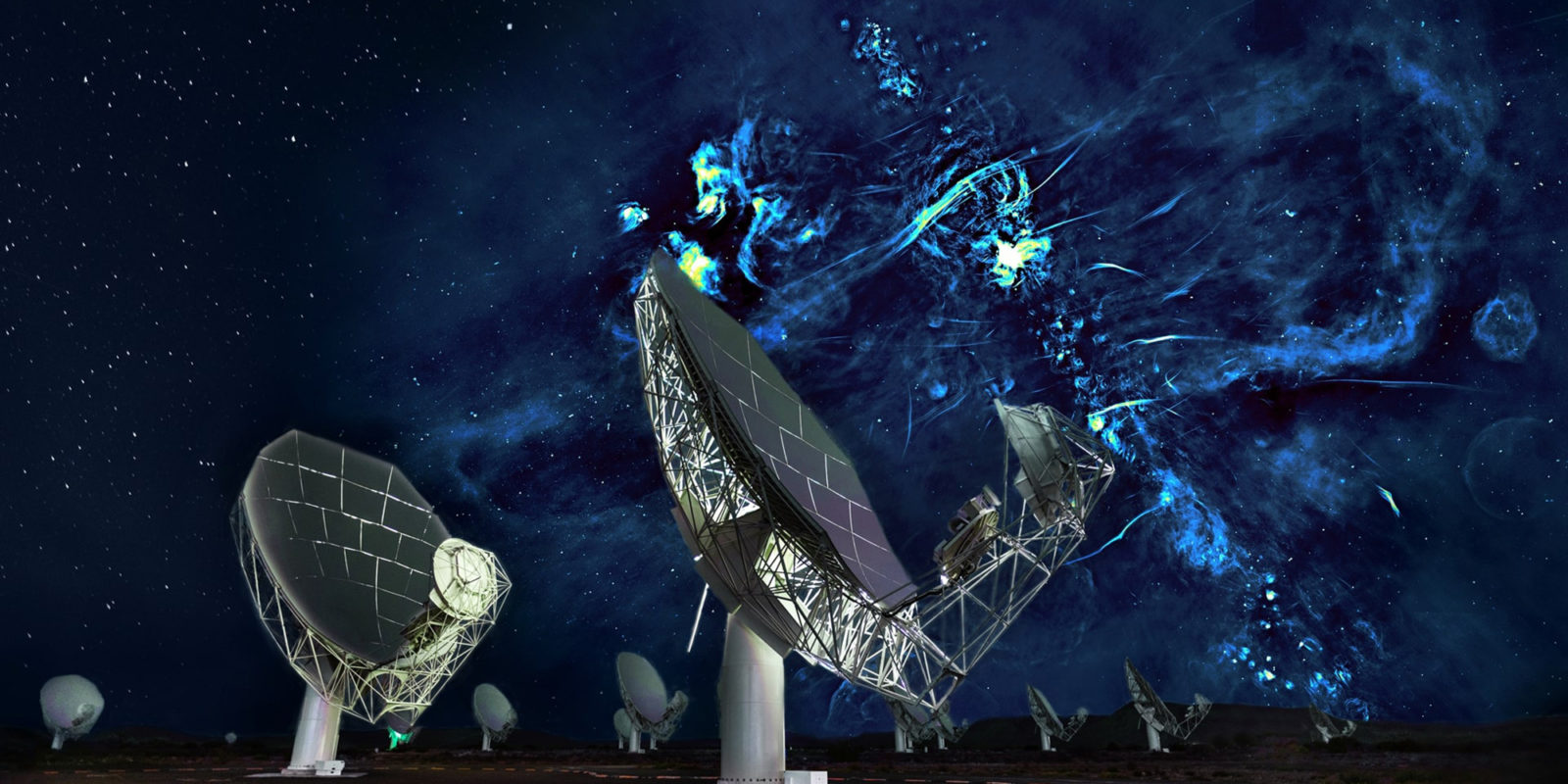 A radio image of the centre of the Milky Way with a portion of the MeerKAT telescope array in the foreground. The plane of the galaxy is marked by a series of bright features, exploded stars and regions where new stars are being born and runs diagonally across the image from lower right to top centre. The newly discovered radio bubbles extend from between the two nearest antennas to the upper right corner. Many magnetised filaments can be seen running parallel to the bubbles. In this composite view, the sky to the left of the second nearest antenna is the night sky visible to the unaided eye, and the radio image to the right has been enlarged to highlight its fine features. Image: SARAO

South Africa’s MeerKAT telescope has discovered enormous “bubbles” towering hundreds of light-years above and below the centre of the Milky Way.

It is MeerKAT’s first discovery and the first scientific result from using all of the radio telescope’s antennas since its inauguration in 2018.

MeerKAT has 64 radio antennas spread over eight square kilometres in the Northern Cape. It is the most sensitive telescope of its kind in the world and is a precursor to the Square Kilometre Array (SKA) radio telescope.

The giant radio bubbles, emitting energy, were caused by a phenomenally energetic burst that erupted near the Milky Way’s supermassive black hole a few million years ago. The results were published this week in the peer review journal Nature.

Dr Fernando Camilo, chief scientist of the South African Radio Astronomy Observatory (SARAO), explained to Daily Maverick that the discovery was a technical tour de force. The radio source Sagittarius A* posed a huge problem for astronomers, because it was so bright.

The bubbles were hiding in the glare of this extremely bright radio emission, which is not visible in optical light. So, the astronomers pointed MeerKAT off the source and were able to detect the bubbles because the telescope is “very sensitive and our systems are so well designed”.

“It worked. It was like finding a tiny firefly in the presence of a bright torch,” Camilo said.

The observations took two months and the data analysis a further year.

“The bubbles are actually one big bubble structure stretched out, with two lobes at the polar ends. They were created during the same event. From top to bottom the structure is 1,400 light-years (meaning to travel from one extreme to the other takes 1,400 years at the speed of light, which is about 300,000km/s). The bubbles are 25,000 light years away from the Earth.”

In terms of our galaxy the bubbles are large, but not in the context of the universe, Camilo said. The bubbles are remnants of an event that happened near the black hole, energising the galactic centre and generating radio waves that we detect today on Earth.

This was not the only discovery.

The environment surrounding the black hole is vastly different from elsewhere in the Milky Way and the team observed mysterious magnetised filaments there. These thread-like structures – tens of light-years long – have been seen nowhere but in the galactic centre. Their origin has remained an unsolved puzzle since the first ones were spotted 35 years ago.

“The radio bubbles discovered by MeerKAT shed light on the origin of the filaments. Almost all of the more than 100 filaments are confined by the radio bubbles,” said the report’s co-author Professor Farhad Yusef-Zadeh of Northwestern University in the US.

Our black hole is calm, compared to those in other galaxies, but it can flare up for short periods from time to time to consume dust and gas. It is possible that one such feeding frenzy triggered powerful outbursts that caused the newly discovered phenomena.

The authors say the close association of filaments and bubbles implies that the energetic event that created the radio bubbles is also responsible for accelerating the electrons required to produce radio emission from the magnetised filaments. Radio emission of this kind is generated in a process known as synchrotron radiation, in which electrons moving at close to the speed of light interact with powerful magnetic fields, the team said in a press release.

Both the bubbles and filaments must have formed during a violent eruption and Camilo said it all has to be connected to the black hole in the centre of our galaxy.

“Black holes are very important in the regulation of star formation in other galaxies. They are like the engines dispersing matter and energy. Frequently, there are massive stars forming around a black hole or there are super novae (exploding stars).”

The radio bubbles, whatever they are, have to be connected to “a starburst period or something happening with the black hole”. It would, however, be hard to find these bubbles in other galaxies as they are very faint and too far away.

Last year, when an image of the centre of the Milky Way was released by the MeerKAT team “we said, but hang on, there is something hiding in the image”. They investigated further and unearthed the brand-new feature in our own backyard – an area that had been observed countless times.

“MeerKAT was not even built to study our galaxy, it was built to look at objects much further away in the universe. But now we have an example of something new happing in our galaxy . . . MeerKAT has been a long journey of 15 years in the making and, as we start, there is much more to come,” Camilo said.  DM