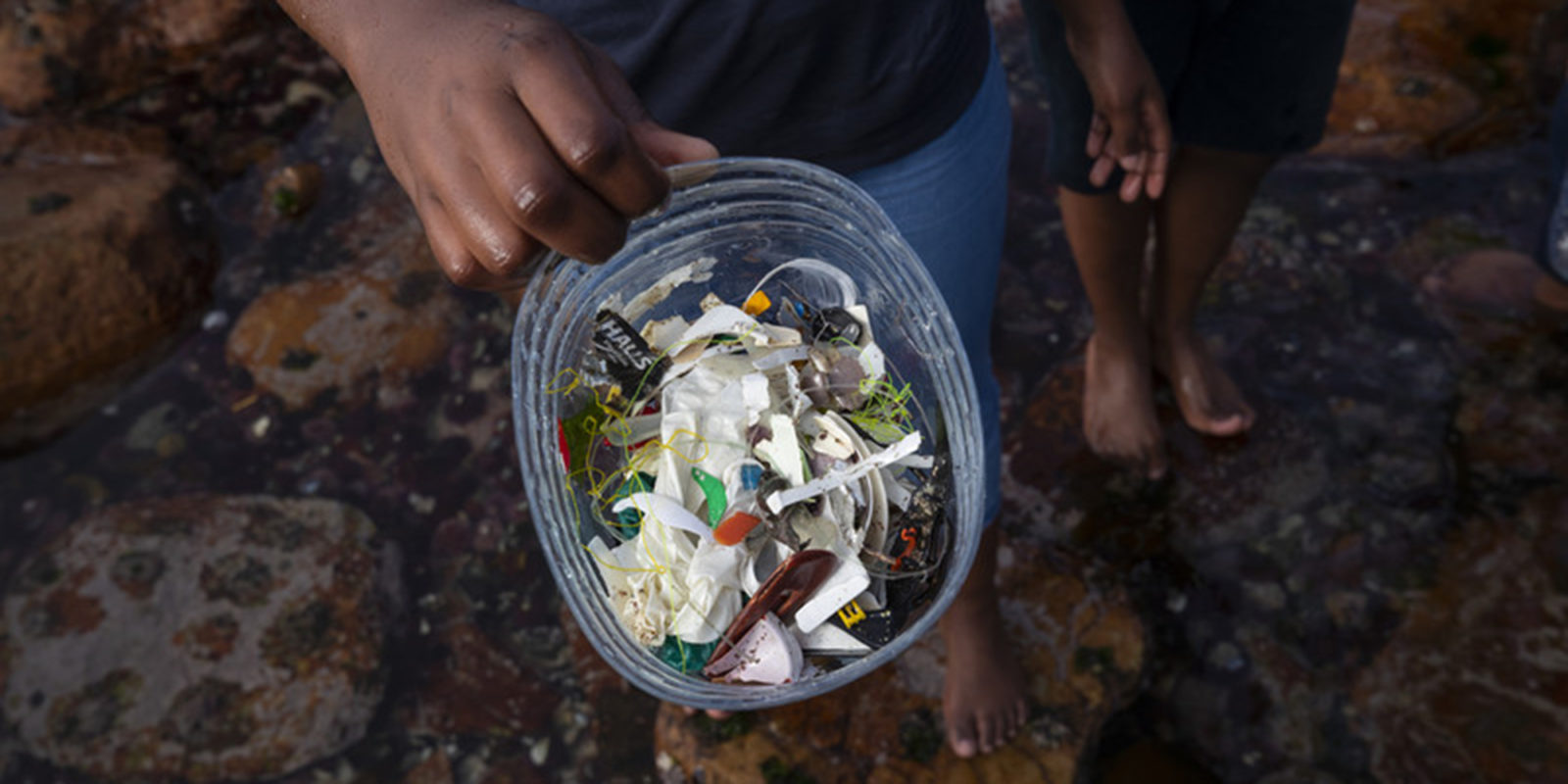 A South African student holds a container of small plastic items picked out of Decorator Sea Urchins during a beach cleanup of the inter-tidal zone of Dalebrook tidal pool in Kalk Bay, Cape Town, South Africa, 04 May 2019. The cleanup was organised by Oceano Reddentes, a South African Non-Profit Organisation teaching ocean users to collect plastic to make Ecobricks which are then used to build homes for the homeless. EPA-EFE/NIC BOTHMA

Plastics are part of our everyday lifestyles, and their release into the environment is yet another serious global environmental crisis impacting the ecosystem and related services. While the proposed circular economy policy solutions and business models have the potential to reduce the magnitude of the problem, single-handedly, they will not give the much-desired result of healthy oceans.

Recycling initiatives are low hanging fruit and without a doubt reduce the leakage of most packaging plastic products, such as carrier bags, and other recyclable mega and macro plastic products into the environment. However, addressing the plastic pollution crisis in its entirety must go beyond the ‘carrier bag’ narrative. A deliberate effort should be made towards outlawing the import, manufacture and use of all forms of problematic plastics such as single-use (non-recyclable) plastics and deliberately manufactured tiny plastic products (microplastics).

South Africa is actively involved in the global fight against environmental pollution and has not been shy to ratify several global initiatives supporting environmental sustainability, including those specifically addressing plastic pollution. Commitment to the UN Environment’s Clean Seas Campaign and Assembly, are some of the most recent and notable examples. Over and above our own National Development Plan, SA has also committed to the UN’s Sustainable Development Goals (SDGs), with SDG 14 aimed at addressing marine pollution of all kinds.

Ostensibly, this is a very good thing, because all these commitments supposedly complement, build on and/or echo the calls for urgent action on environmental pollution. Examples of earlier initiatives for reducing plastic bag consumption in SA include recycling and introduction of the plastic bag levy. While similar initiatives have worked elsewhere, the results have been slightly underwhelming in South Africa. A review done seven years after the plastic bag levy, found plastic bag consumption at about 8-billion per year, of which 96% went to landfills after use. This problem is not unique to South Africa, ocean plastic pollution is a global crisis. Tackling it requires a global solution almost on par with the Stockholm convention or the Paris accord.

Nonetheless, other governments have pressed on with plans to completely ban other forms of problematic plastics, ie single-use plastics products (such as plastic cotton buds, cutlery, plates, straws, drink stirrers, glitter and sticks for balloons) and the use of microplastics in certain consumer products.

A recently completed Water Research Commission has demonstrated the presence of substantial amounts of micro to nano-sized plastic particles in a selected surface, tap, and groundwater sources in South Africa. Microplastics in water sources could originate from industrial pellets, microbeads used in personal care products, micro/nanofibres used in clothing items, as well as abrasives from synthetic sandblasting. These minute plastic particles end up in our rivers because wastewater treatment plants are not designed to remove such small particles.

Curbing pollution related to these types of plastics demands immediate and aggressive action. This kind of action is provisioned for under Principle 15 of the Rio Declaration on Environment and Development 1992. This section states that, “In order to protect the environment, the precautionary approach shall be widely applied by States according to their capabilities. Where there are threats of serious or irreversible damage, lack of full scientific certainty shall not be used as a reason for postponing cost-effective measures to prevent environmental degradation”. To date, only a handful of countries have invoked this principle and announced calls to ban single-use plastics and/or microplastics. Among these are the US, UK, Sweden, Finland, France, Iceland, Ireland, Luxemburg and Norway. A European Union-wide call for the ban of single-use plastics is also underway.

In the recent Budget Policy statement, the Department of Environmental Affairs announced their ambitious plans for curbing plastic pollution. However, much of the stimulus behind these plans rests on the assumption that economic growth can be decoupled from environmental degradation, and that poverty eradication and environmental sustainability can be simultaneously achieved.

Plastic recycling in South Africa has been ongoing for over a while now, with the rate of recycling currently estimated to be about 41.8%. However, the rising plastic pollution problem is a clear symptom that as a country we have neither achieved the necessary balance for sustainability, nor been able to maintain the momentum from earlier efforts against plastic pollution. Visible plastic pollution is easily tackled through consumer education and awareness.

However, microplastics require a differentiated approach. Accurate product labelling will be vital, as it will provide enough information for the consumer to make choices on the product. As it is, it may be hard for the consumer to even know that the product contains microplastics; nanofibre containing clothing items are good examples. SA’s efforts to implement commitments to global initiatives against environmental degradation are an important first step but enabling effective responses in marine water quality management can contribute to unlocking the economic potential of South Africa’s resources, growing our GDP and creating more sustainable jobs, while at the same time ensuring that our environment is free from litter. DM