Rape & Femicide Crisis, RSA: Keep up the pressure, urge activists – we all have a role to play 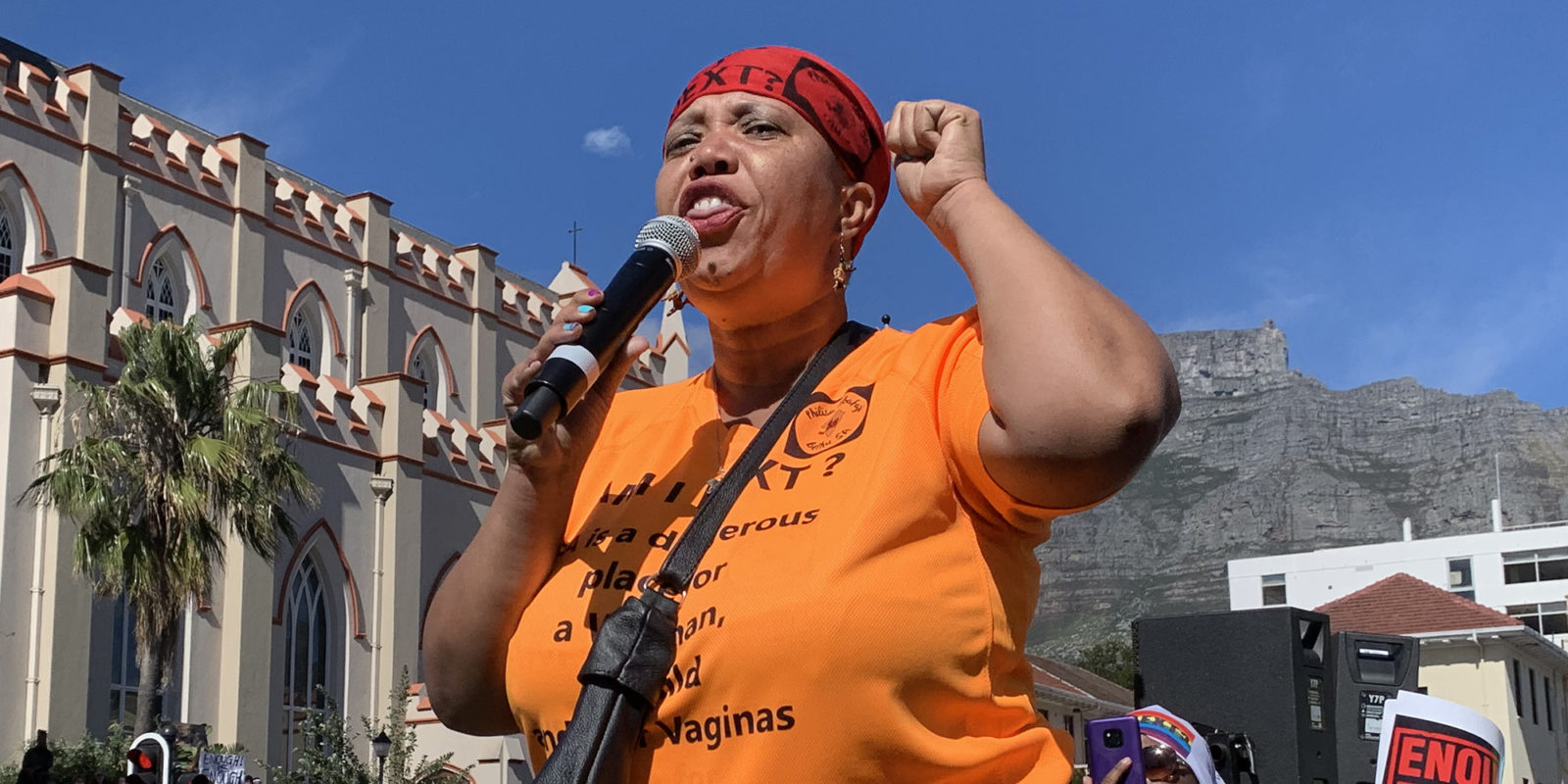 Lucinda Evans, Executive Director of Philisa Abafazi Bethu Women and Children's Program in Lavender Hill on the Cape Flats addresses the protest march against femicide and Gender Based Violence on 5 September 2019 outside Parliament in Cape Town. Photo: Anso Thom

Several women, including long-time community activists, took centre stage nationally this past week during the massive marches in Cape Town against endemic rape, murder and abuse of South African women. If we are to keep up the pressure and momentum we need to take our cue from these leaders.

While several women have emerged as the driving energy behind mobilising and containing the rage of women in the wake of several successive brutal rapes and murders across the country, it was the voice of Lucinda Evans that rose above the crowds.

A day after police had fired stun grenades and used a water cannon on protesters before arresting 11, Evans took the megaphone outside Parliament on Thursday, 5 September, to address the even larger crowd, all dressed in black, who had gathered.

Evans told the crowd “today is the beginning of 365 days for women” and not just 30 days or a Women’s Month.

It was Evans who, in no uncertain terms, reminded SAPS members, who had stood in a grim line the day before protecting the closed gates of Parliament and the elected officials behind them, that they, in fact, serve the citizens of South Africa.

“I want to start off by asking General Mfazi [Lieutenant General Sindile Mfazi], acting WC Police Commissioner and General Manci [Major General Mpumelelo Manci]. We will not be moered today by the police. Can I get the protection from the generals in the PC’s office?”

Then Evans urged the cops in Afrikaans to “keep calm, you are just going to stand there, today you will not hit us”.

“We were moered yesterday because we raised our voices…. you are fathers of daughters and you work under instruction. And the women here today, I take the mandate from the masses. You will stand down and you will not moer us today.”

It was a simple but hugely effective taking of command of the moment. Evans, a seasoned activist and founder of Philisa Abafazi Bethu, understood that in that instant SAPS members needed to be allies, and not alienated.

“I respect the protecters. I respect and value you,” she said, “but I want to say to the protectors here behind us and around us, they are here to protect us. They are not going to moer us.”

In the aftermath of the marches, many who had not heard of Evans began asking who she was. Of course, she is well known away from the national spotlight as a tireless activist, community worker and head of the local Community Policing Forum in the gang and violence-ridden Lavender Hill.

The Philisa Abafazi Bethu website describes how Evans’ dream of “protecting and empowering abused women and children” came about when she witnessed a crowd who had gathered around a man who was beating his wife in the streets of Lavender Hill in 2008.

“People were watching, yet no one was doing anything to stop the violence. Lucinda aims to be the person that others can rely on for protection and reassurance in the community of Lavender Hill,” reads the introduction.

Since its establishment, Philisa Abafazi Bethu has grown to include an after-school programme for boys and girls who are at risk, a youth programme, a surfing group, training for the empowerment of women, a court support group, and a baby saver, installed at 69 Hillview Avenue in 2018 after a desperate mother left a baby on the stoep of Evans’ home.

In the aftermath of the marches and the continued violent attacks on women in Cape Town and across the country, many women and their allies are asking, what now?

Evans posted this reply to the question on her Facebook page:

“For me what’s next is not waiting to be invited to the next meeting or the next feedback meeting. We trust that the President’s priority teams and the Premier of the Western Cape priority protection teams have met and have not forgotten to invite us to those feedback meetings.”

She said she trusted that the universities’ priority safety committees had met and were drawing up safety plans “because the students have spoken about what they have endured and still are”.

“The next step, or what the next step for me is, has begun. And it is doing what I’ve always been doing. Community work including tracking areas that do not have adequate lighting, or where overgrown bush or unkempt grounds create dangers for women pedestrians.”

Evans added that this involved keeping track of problem, vandalised and unfinished buildings and how these impacted on women’s safety. It meant making public transport safe for women, ensuring that street lights worked and holding those responsible for their upkeep accountable. It meant ensuring that spotlights in informal settlements worked and that there are enough CCTV cameras in townships.

“How many women have to leave townships at 4am in the morning to bus stops and taxi ranks or on the road to wait for transport. And then return 22h00 or 00h00 from work?” wrote Evans.

It meant co-ordinating Neighbourhood Watch groups, street committees and block and flats watches to draw on for help with protection services.

“Can Community Police Forums take on a protection campaign and partner with stakeholders who are working in the field of GBV and do joint activities, can CPF be part of or drive community safety and protections campaigns aimed at protection of vulnerable groups?”

This is the work that needed to be done.

Women and men should engage with local police stations to determine whether a community safety plan existed and whether there were provisions for the safety of women and children.

These were matters that could not be left up to the authorities, said Evans.

“For me it’s still 365 Days. The women’s body counter is still counting. We have a mandate. There are many campaigns and many groups, join them if their mandate speaks to your heart and activism, then add your time and voice,” urged Evans.

There was much to be done, she added, from following court cases, gathering statistics, advocating policy and legislation to constitutional changes, and taking on the criminal justice system.

For Evans, however, it was still “bread and butter” issues which pumped her adrenaline.

This was where she wished to add her voice.

“If you wish to join me, support me, and fund the initiative. Because we need as many volunteers and support, admin, driving, hosting meetings, visiting and engaging with protection agencies etc to ensure that where we live and where we walk and where we work and where we have our downtime will be safe.”

“I am adding my voice to frontline response and services for GBV and child protection, and am going to rally around support for this and advocate for strengthening these fundamental services. This is my ‘what next’ for the next 365 Days,” wrote Evans.

She added she was open to collaborating with anyone.

“We all have our set of values and set agenda outcomes. I am ready to come and support even if support means mobilise.”

At the march on Parliament Evans called for the voices of women of South Africa to unite.