It wasn’t me, says Malema… it was my brothers 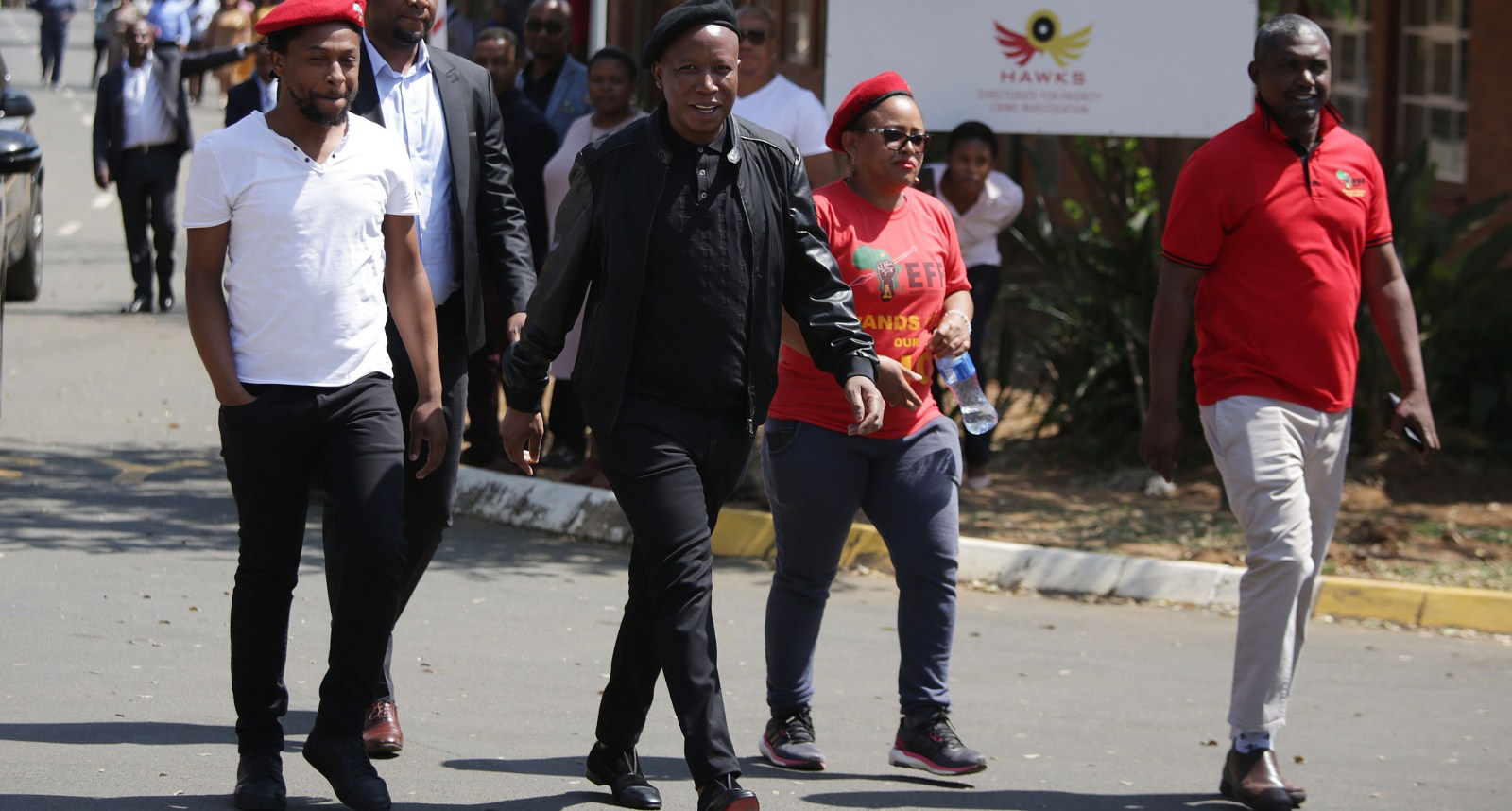 PRETORIA, SOUTH AFRICA - SEPTEMBER 10: EFF leader Julius Malema (2nd L) is accompanied some members of his party as he leaves Hawks offices in Silverton on Tuesday, 10 September 2019. Malema met with investigators over a case in which he allegedly unlawfully discharged a firearm during a political rally in the Eastern Cape last year. (Photo by Gallo Images / Phill Magakoe)

After an extended meeting with Hawks officials in Pretoria in connection with an unrelated matter, EFF leader Julius Malema on Tuesday 10 September denied any wrongdoing when it came to funds looted from the VBS Mutual Bank.

It was, he said, in fact his brothers who used the Mahuna Investments account, as they followed him around South Africa on his political roadshows.

Malema also refused to give a statement to the Hawks regarding allegations he fired an automatic rifle during the EFF’s 5th birthday celebration in August 2018.

The EFF leader says he refused because he had been advised that anything he said might be used against him in a court of law.

He said he “does not have anything to answer” and the Hawks are being “mischievous” and “dramatic”.

Malema said on previous occasions the Hawks had met him at the EFF’s headquarters or his lawyers’ offices, so he does not understand the change this time around.

Still, Malema says he will “subject himself to the rule of law”. When asked about the nature of the conversation he had with the Hawks behind closed doors, Malema said he was not willing to divulge the content of their talks.

When asked if he sticks to the statement made by EFF spokesperson Mbuyiseni Ndlozi that the gun that was fired was a toy gun, Malema said he would not comment on that.

Malema denied allegations in Daily Maverick that he was directly linked to the alleged fraud, theft and money laundering of a portion of the R5.3-million in VBS funds that was siphoned off to Mahuna Investments and that the bank card linked to this account followed him around South Africa, maintaining his personal lifestyle.

He called the allegations a “fabrication and unfounded” and dismissed claims that he used VBS funds to purchase a house in Sandown, Johannesburg. According to Malema, “Mahuna Investments never received money from VBS” to fund the house. He said the money came from Sgameka Projects.

Malema claimed the Mahuna Investments accounts always seemed to show up wherever he was because his brothers run a business in Johannesburg and have been supportive of his political career. As such, they travel with him whenever he goes to rallies and meetings.

Regarding his expenses at the annual Durban July horse race, Malema said his brothers run a marquee there where they sell tickets and food. He said they also hire a DJ and incur other expenses.

He said the R500,000 from Mahuna Investments was a business investment that profited his brothers:

“They put money in the business and received a return.”

He claimed the money alleged to have been spent for his children’s school fees was to help a friend who had put up Malema’s children’s names for reference, but the money was used to help someone in need.

He said he used to wear Gucci and Louis Vuitton clothing but he has since stopped doing so.

“I have worn it before, I don’t wear it now,” said Malema. “I make no apology for this”.

Regarding the funeral of the late Zimbabwean former president, Robert Mugabe, Malema said the EFF had written to the Zimbabwean embassy and Zanu-PF asking to attend the funeral.

“We are going to bury president Mugabe. We always honour those white monopoly capital wants us to hate.” DM