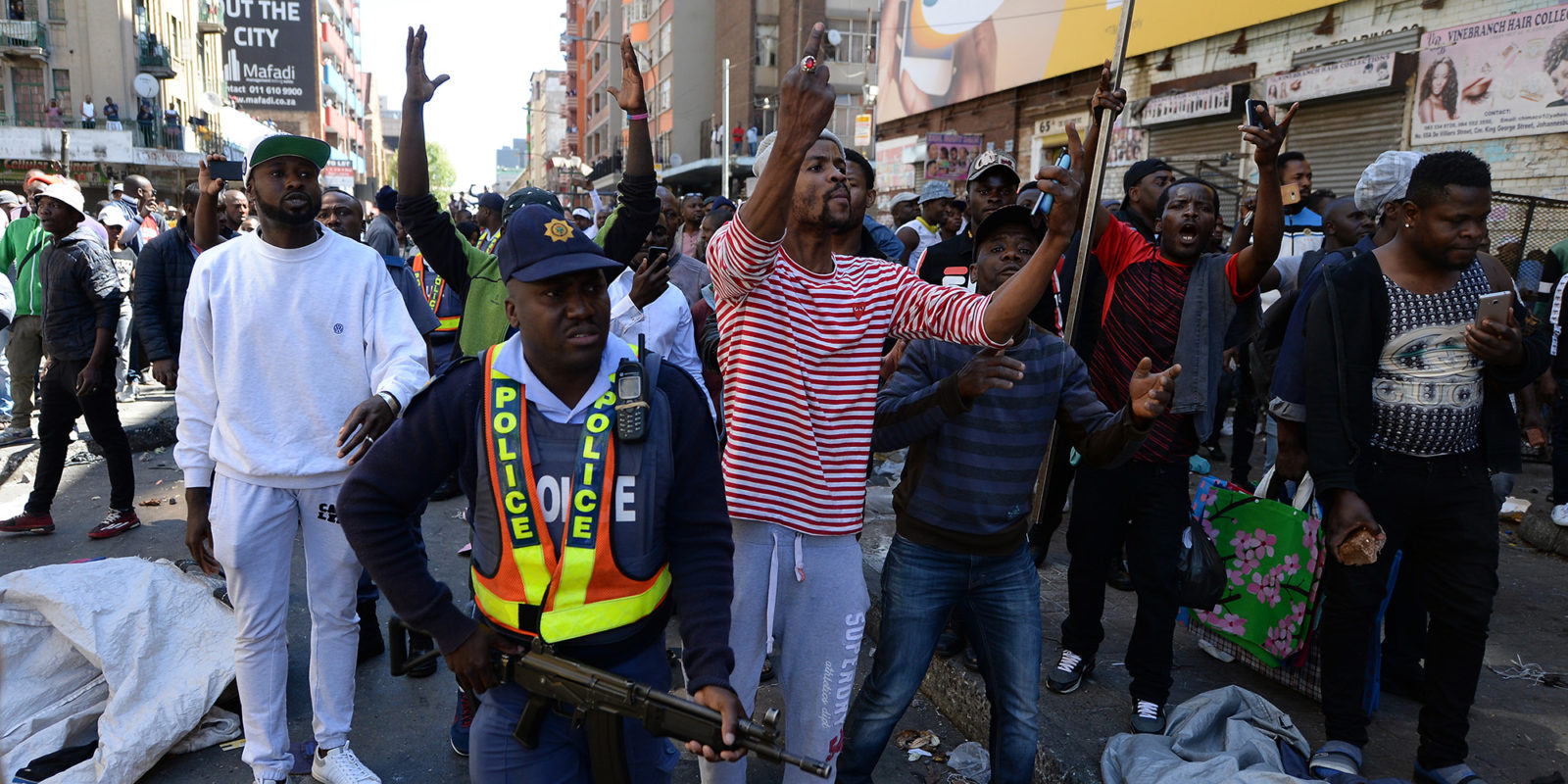 Looting of foreign-owned shops took place in Malvern, Turfottein and johannesburg CBD, the situation in most areas remained tense with most shops being vandalised foto Felix Dlangamandla/Netwerk24

While the World Economic Forum discussed the African Free Trade Agreement in its little bubble, the anger among Africans about South Africa’s xenophobia and the government’s refusal to address it is palpable. It has the potential to derail the only bright spot on our economic horizon.

The ratification of the African Continental Free Trade agreement in May is the biggest thing to happen in Africa post colonialism, says Finance Minister Tito Mboweni.

Mboweni was addressing delegates at the World Economic Forum for Africa in Cape Town, standing in for President Cyril Ramaphosa who was accepting a memorandum from women protesting against extreme levels of gender-based violence in South Africa.

“I hope our leadership lead in popularising this agreement in the different countries so it’s understood by every border post official, manufacturer, truck driver and editor so we can get the message across. It’s a huge development in Africa,” Mboweni told delegates.

However, Nigerian Obiageli Ezekwesili, a senior economic adviser at the Africa Economic Development Policy Initiative, and co-founder of the #BringBackOurGirls Movement, cut directly to the chase. This was after three days of delegates avoiding the elephant in the room: xenophobia in South Africa.

“The South African government owes the Nigerian people an apology,” Ezekwesili told media on the fringes of the WEF.

“The South African government looked away while our citizens were maimed, attacked and killed. They refuse to address the problem of xenophobia and allow the myth to continue that migrants are the cause of economic problems in the country. Yet it is a well-documented fact that migration can enhance economic growth in a country – do they know how many ‘illegal immigrants’ in South Africa are teachers?

“The mood towards migrants in South Africa threatens the entire free trade agreement; you cannot build a free trade area under those conditions,” she said.

The African Continental Free Trade Agreement has been signed by 54 of Africa’s 55 countries and ratified by 27, making it the largest trade group in the world since the formation of the World Trade Organisation.

Now in its operational phase, the agreement requires members to remove tariffs from 90% of goods, allowing free access to commodities, goods, and services across the continent.

The UN Economic Commission for Africa estimates that the agreement will boost intra-African trade by 52% by 2022.

Signing an agreement and implementing the agreement are two different things, however, and navigating a route through the complexities created by trade nationalism and protectionism will not be easy, as SA’s experience with xenophobic violence clearly documents.

It is also vital that the agreement does not enable the economically stronger at the expense of the vulnerable.

There are challenges, but the opportunity is greater, says Bola Adesola, senior vice-chairman Africa at Standard Chartered bank.

“Producers, big and small, will find their access to markets will improve; it will enhance prosperity and inclusiveness. Banks can play an important role in providing the finance necessary for the growth of cross-border trade.”

Standard Chartered bank, she notes, operates in 16 countries across Africa, and has done so in some cases for close to a century. She travels between these markets on a monthly basis, but still requires a visa for most countries.

It is a given that trade liberalisation requires free movement of people if it is to be effective, and SA delegates must have been cringing during these discussions at the WEF. Yet, the president’s comments skirted the issue.

At a breakfast ahead of the forum last week, President Cyril Ramaphosa touched on this point, noting that “goods do not move on their own.” The free movement of people must be the logical conclusion, whether via an African Union passport or something else. We cannot allow one without the other – we need to inculcate that mentality, he said.

Mboweni got a little closer to the subject:

“As an African I should be allowed to settle wherever I want to settle. African solidarity is key; living together as Africans is key. If a Nigerian wants to live in Johannesburg, he or she should be free to do so. These are artificial barriers that we have created, and this hatred must be a thing of the past.”

To understand the opportunity this presents for African economies, Arancha Gonzalez Laya, executive director of the International Trade Centre, says that about 50% of US trade is with itself. In Asia the internal trade figure is 60% and in Europe it’s closer to 70%. In Africa the figure is 15%.

“It is easier for African countries to trade with other markets than internally. Africa has been going against the trend of integrating their markets. This integration is part of the structural transformation of economies on the continent, many of which are just too small and are not delivering for their people.”

The challenges are numerous.

“Our infrastructure does not allow for the easy movement of goods or people; we have lots of regulation, economies are at different levels including 33 LDCs (least developed countries), which makes them vulnerable,” says Patrick Dlamini, CEO of the Development Bank of Southern Africa (DBSA).

The red tape alone is enough to stifle any thought of trade. To move one crate of goods from Rwanda to Cape Town requires 56 customs certificates, 84 stamps, 28 SADC certificates…and the list goes on.

“You cannot build a trade system like this,” says Ngaire Woods from Oxford University. “I’m not advocating throwing down the barriers, because liberalisation can hurt, but that does not mean we should stop.”

Trade liberalisation is coming to Africa at the same time as individual economies are trying to industrialise, which has the potential to make governments more protective. But there is no time to waste. Two of the world’s largest economies – the US and UK – are becoming increasingly inward-focused as they withdraw from multilateral trade agreements.

And the trade war between the US and China is unlikely to soon die down completely.

“These events are creating headwinds that have the potential to bring harm to African economies,” says the African Union’s commissioner for trade and industry, Albert Mudenda Muchanga.

“If we do not create a large African market space, the problems that are emerging around the world will be able to hit Africa much worse, but if we are able to increase trade amongst ourselves, I think that will act as a buffer.” BM

Davos by the Numbers: From Climate Change to Billionaires