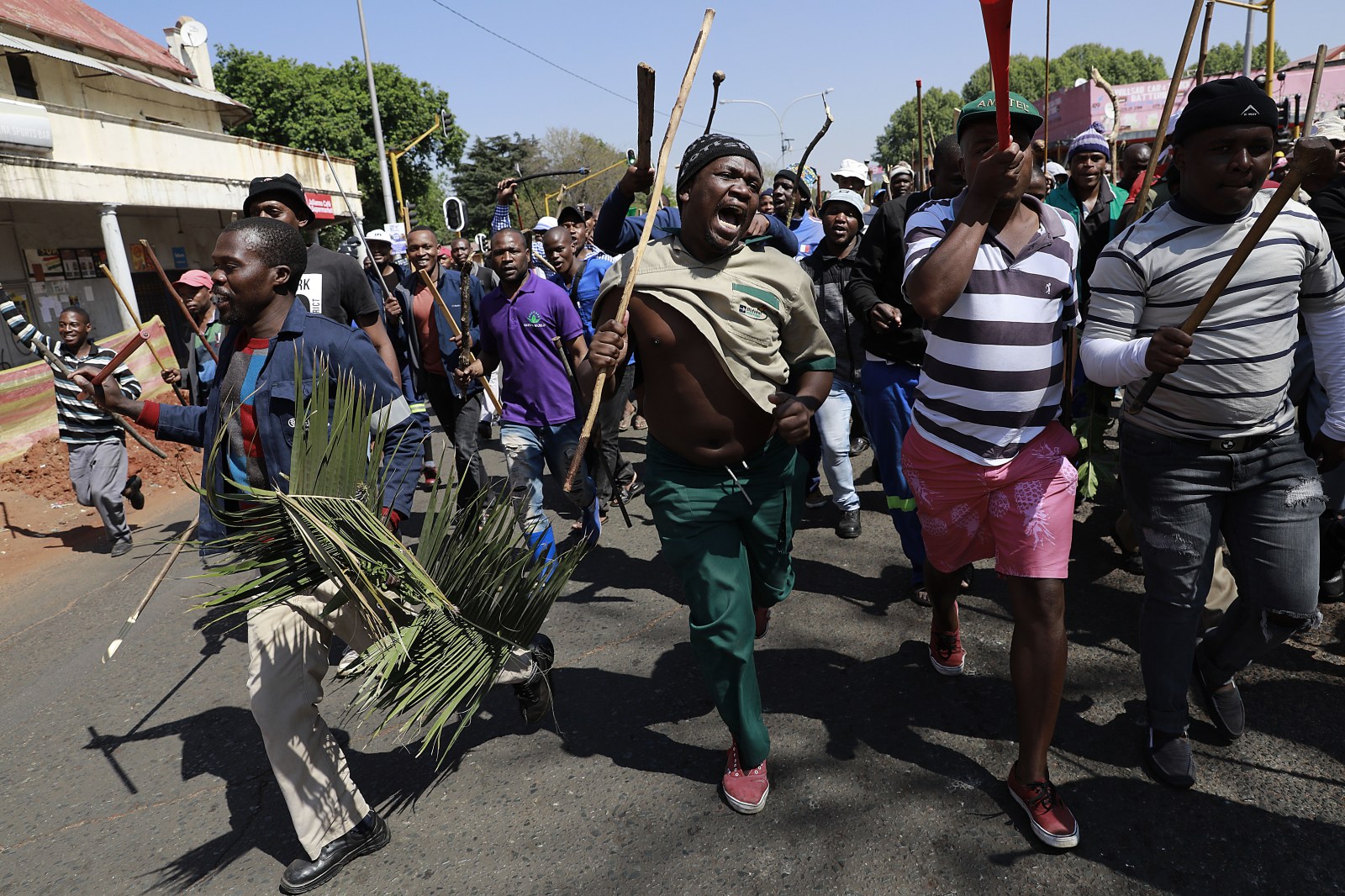 Protesters from various hostels in eastern Johannesburg march along Jules Street, chanting 'foreigners must go back to where they came from' on 8 September 2019. (Photo: Alon Skuy © Sunday Times)

Two people are dead and around 20 arrested after mob attacks and xenophobic violence erupted in Johannesburg again on Sunday. The police said the situation was under control on Monday, but residents were cautious there might be more violence come nightfall.

“It might seem quieter now but wait until it gets dark, that is when the violence escalates,” said Jeppestown resident Mandla Mkhwanazi, 33, on Monday.

Violence erupted again in Jeppestown and spilled over into the Johannesburg CBD and Malvern on Sunday, a week after mobs began looting stores, attacking residents and setting properties and vehicles alight, purportedly in the name of xenophobia.

SAPS said two people were killed in the violence on Sunday, one in Jeppestown and one in Hillbrow, and around 20 people had been arrested. Almost 500 people were arrested last week as the violence spread throughout Johannesburg, Ekurhuleni and Tshwane. Eleven deaths are so far believed to be related to the violence.

SAPS fired stun grenades and rubber bullets on Sunday as a group, believed to be from the Jeppe men’s hostel, marched through town towards the CBD, MTN taxi rank and Hillbrow. The situation appeared calm on Monday with many stores in the affected areas closed and a high police presence on the streets.

Dumusile Dube, 21, who has been living in Malvern for a few years, said she was terrified after she was hit by a rock on the head on Sunday.

“It’s not safe outside the house but it’s also not safe inside. I might be forced to consider leaving the area if the violence continues because I really fear for my life,” said Dube.

Jeppestown resident Mkhwanazi said that while things seemed calm during the day, violence escalated under the cover of darkness when shops are burned down, looted and people beaten up.

The attacks continued in Johannesburg on Sunday after Inkatha Freedom Party (IFP) President Emeritus Prince Mangosuthu Buthelezi attempted to address residents of the Jeppe men’s hostel who have been blamed for fuelling the violence.

“What we have seen in the past few days is unacceptable. The attacks on foreign nationals and their businesses are purely xenophobic,” said Buthelezi.

“We need to stop this thing in its tracks before serious action is taken against us. Do we really want to escalate into international conflict? I feel ashamed. As Africans we are making ourselves a laughing stock in the rest of the world,” he continued.

As a member of the Zulu royal family and long-time leader of the IFP, Buthelezi’s address was expected to calm the violence, but a group from the hostel, which is dominated by isiZulu speakers, left during his speech.

Police Minister Bheki Cele had planned to hold a community meeting at the hostel on Sunday but it was postponed as some local leaders had to attend the annual reed dance in KwaZulu-Natal.

City Press has reported that the police’s crime intelligence unit has failed to provide information that could have predicted or prevented the attacks and SAPS leadership had struggled to formulate a clear plan to end the violence.

The City of Ekurhuleni said on Sunday that it is providing temporary shelter to around 800 foreigners in Katlehong after the Nhlapo and Mandela informal settlement sections of the township were attacked last week.

Other areas in Johannesburg, especially in previously volatile areas like Soweto and Ekurhuleni, remained calm on Monday. Many business owners of Pakistani, Somali and Bangladesh descendants have not re-opened their shops since they closed down as a result of the violent attacks.

Other African nations and international institutions have condemned the attacks in South Africa and this weekend led to not one, but two international friendlies that were scheduled to be played by Bafana Bafana being cancelled.

At a press conference on Friday PSL coaches said that they work with players from different countries and they need to take a stand and voice their concern about the situation.

“You have sent out letters to the overseas-based players to come down here to play a friendly, and they have to go back and tell their coaches, their team mates that ‘we Africans we don’t love each other, we are fighting each other, that is why we could not play a match’” said Bafana Bafana coach Mluleki Ntseki on the embarrassment of the cancelled matches. DM