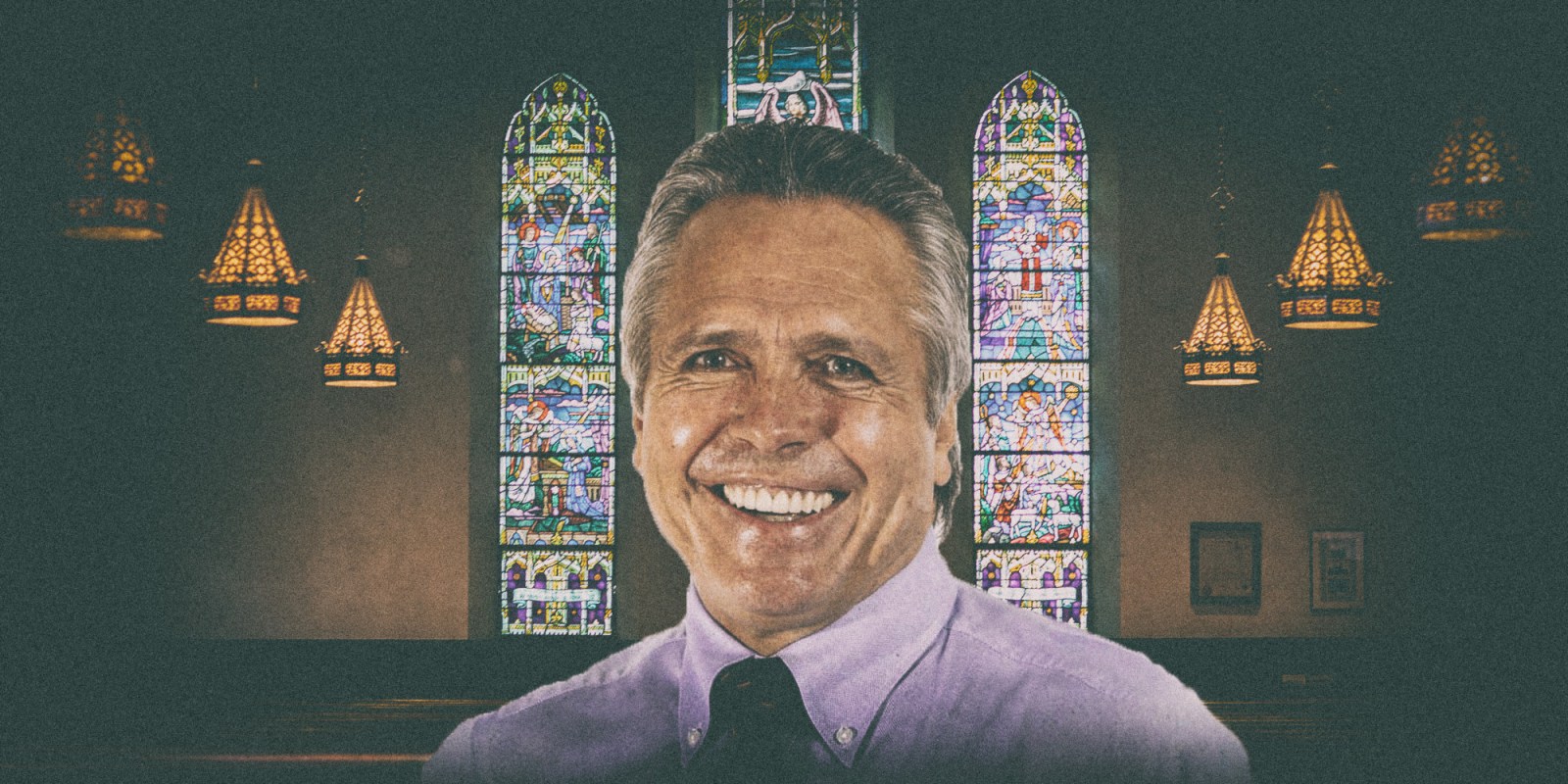 Bosasa executive and corruption mastermind Gavin Watson was a religious zealot who dished out millions of rand in cash to pastors who bestowed spiritual powers on him, and proclaimed that he had been called to guide and advise the president of the country.

This article has been edited post-publication to include a right of reply from Dr Rodney Howard-Browne which was erroneously left out when the article was first published.

Bosasa managers were perplexed when at times the pastors broke down at prayer meetings in the company’s boardroom and rambled in strange tongues before blessing company CEO Gavin Watson.

“I am the church and you must listen to me because God has sent me to counsel and guide you,” Watson told his flock at the daily prayer meetings at Bosasa. Once a week, he handed out the wafers at holy communion.

Watson’s religious pranks came to the fore this week, two weeks after he drove a Toyota Corolla into a concrete pillar at Johannesburg’s OR Tambo airport. He died instantly.

Over the past 20 years, Bosasa has done business with government to the tune of R12-billion. The company’s former COO, Angelo Agrizzi, has implicated Watson at the State Capture Commission in money laundering, tender fraud, corruption, bribery and tax evasion worth billions of rand.

Watson believed it was more efficient to lease the souls he corrupted on a monthly instalment rather than paying them lump sums.

Since his death, theories and conspiracies have abounded that the 71-year-old Bosasa chief executive either committed suicide or was “taken out” in an elaborate murder conspiracy.

If former president Jacob Zuma – a self-professed intelligence guru – is to be believed, the corruption-embroiled Watson may have been murdered in a geopolitical assassination plot aimed at taking control of the country.

In eulogies and exaltations at a memorial service in Johannesburg and his funeral in Port Elizabeth earlier this week, Watson was compared to Jesus Christ.

One of the people who Watson showered with gifts and alleged bribes was former Cabinet minister Nomvula Mokonyane, who described her benefactor at the memorial service as a struggle hero and philanthropist and compared him to Jesus Christ.

Two Bosasa insiders came forward last week with testimony of Watson’s spiritual pranks at Bosasa. They don’t want their names to be mentioned but were both at the heart of the religious and other events at the company.

Some of their evidence has already been confirmed by Agrizzi and other managers who testified before Justice Raymond Zondo. Agrizzi wouldn’t comment on the religious activities of Watson this week.

One of the pastors on Watson’s payroll was Malawian evangelist-turned-politician Chris Daza, a former Cabinet minister and presidential candidate. He is currently a special adviser to Malawian President Peter Mutharika.

The Malawian media has in turn linked Daza to controversial Malawian pastor Shepherd Bushiri. He and his wife are currently standing trial in the Pretoria Commercial Crimes Court on charges of fraud, money laundering and the contravention of the Prevention of Organised Crime Act (Poca).

According to Daily Maverick’s sources, Daza received R40,000 a month while Watson also financially contributed to his Al Dabar school of prophets. The money was never declared in the Bosasa books and was probably the proceeds of crime.

Congolese pastor Francis Kahozi Nyembo, who led the sermon at Watson’s funeral, was also richly rewarded. Our sources claim that Nyembo, who is also a director of mineral companies in the Congo, also received around R40,000 every month. Watson allegedly used his contacts at the Department of Home Affairs to assist Nyembo in getting permanent residence.

The cash for the pastors came from the same safe in Watson’s office where he kept money to bribe officials and politicians.

Daza and Nyembo did not respond to requests for comment. Daily Maverick’s sources said: “Watson had a Messiah complex, saying that ‘I am the Church’ when his religious denomination was queried. This was supported by generous holy communions during which he handed out the holy wafers at the prayer meetings.”

A central figure in Watson’s religious world was former Bosasa employee Lindie Gouws. She has been identified in the media as Watson’s “long-time girlfriend” and was fingered at the State Capture Commission as one of his financial benefactors.

Venter complained to Watson that it was wrong and morally unjustified. Watson threatened to fire him. After her resignation at Bosasa, she remained on the payroll of African Global Operations (Bosasa’s new name).

One of Watson’s prophets allegedly prayed over Gouws and prophesied that she would eventually marry a man that was decades older than her and who owned a powerful company.

Watson reported to his inner circle that Daza had apparently professed that Gouws was the “true anointed” one. She was known as “Mother Mary” at Bosasa.

“He believed every word so these prophets were frequent visitors to Bosasa and were always received with pomp and ceremony by Gavin. His gullibility knew no boundaries. This included several reports from Gouws that she had died, flatlined and was raised from the dead. Gavin would relate the apocryphal stories with wide-eyed wonder.”

After Gouws left Bosasa, she found My World Multimedia Ministry, My World Magazine and Come In! women’s ministry. Much of this was funded by Watson and Bosasa.

He sent Gouws with a private plane and a million rand to evangelist and potato farmer Angus Buchan. Watson also sent her to America to hand over a multimillion-rand contribution to preacher Rodney Howard Brown. He was born in South Africa and heads Revival Ministries International.

These costs were written off against Watson’s Consilium Business Consultants in an attempt to hide these astronomical costs from his management.

Gouws also led pilgrimages to Israel in order to bring “comfort and blessing” to the people of that country. Watson allegedly used his Home Affairs contacts to ensure that Gouws and her guests were treated as diplomats at the airport and could swiftly clear customs.

Said our sources: “Watson believed everything his mistress fed him about getting regular visitations from God at two o’clock at night. He was a gullible sucker for any foreign pastor who claimed to be a prophet. These prophets from Nigeria and other places would arrive or organise a meeting and win him over without too much effort. Premises, facilities, cash injections were common as long as they prophesied.”

They claim that Watson was not the angel that his staff made him out to be.

“He was without the refinement of tact and staff avoided him despite all the adulation. He, in front of others, would freely humiliate staff. ‘Look at you. Look at your body. You are fat. Why don’t you do something about it.’”

Gouws said in her comment that she had known Watson since 1996 and had never concealed her professional relationship and/or long-standing association and friendship with him.

She said: “My association does not require any justification, neither do I have to explain either my work, my contribution as an employee/consultant to various other entities, or my faith.”

About the allegations that she improperly benefited from her relationship with Watson, Gouws said that there had been “selective and manipulated evidence given at the State Capture Commission”.

Gouws admitted that she had met Daza and knew the Al Dabar ministry but said it was not true that he prophesied that she will marry an older man with a powerful company.

About being “raised from the dead”, Gouws said it was a “perversion of the truth” by Daily Maverick’s sources “as I was indeed hospitalised, whilst on a trip to Israel, attending several meetings.”

She said the innuendo “raised from the dead” is an attempt to sensationalise the matter and is “completely misconstrued to suit a specific narrative”.

She said that all men and women who believe in Christ are defined as the “Brides of Christ”.

She admitted handing a “contribution” to Buchan and that she went to Rodney Howard Brown’s lectures in the United States but denied handing him a cheque for “several million rand”.

Mental health practitioner Dr Denise Bjorkman ran an external counselling service for employees at Bosasa. She said to the SABC that Watson was a “larger-than-life” personality.

She said there was a couple of cultish elements within the company but that it was not a cult as such.

She said there were certain rituals that took place such as offering holy communion and holding prayer meetings on a regular basis. The staff were free to believe the way they wanted to – provided that Christianity was at the centre of everything. She last saw Watson two years ago, she said. DM