The ‘weed’ growing on roadsides that’s coming into its own 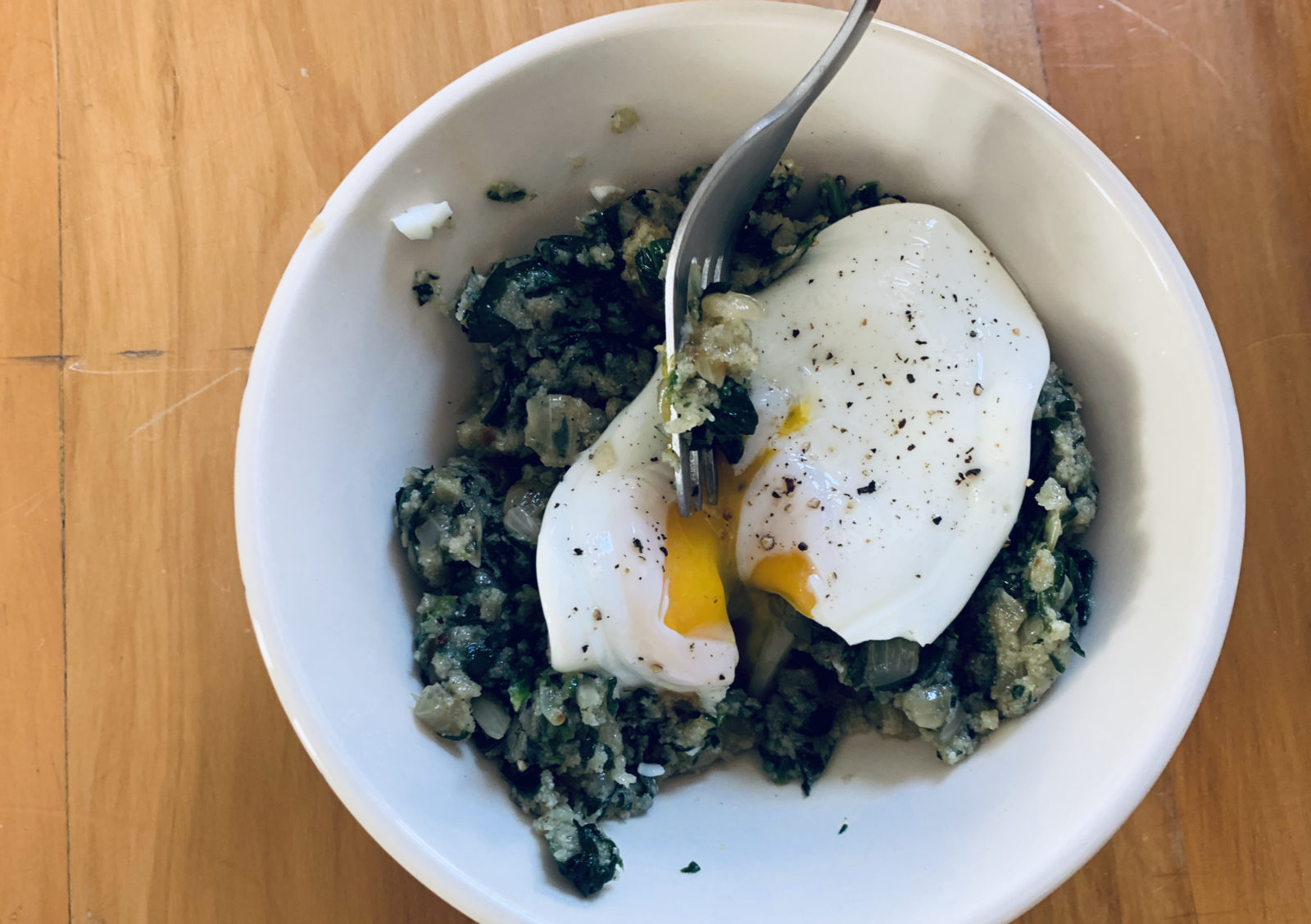 8. If serving your morogo with a fried egg, be sure to keep it sunny side up so the yolk can be runny. Photo: Louzel Lombard

Morogo is sometimes regarded as a weed by gardeners who are unaware of its delicious and healthy qualities. Following a study on the various edible ‘weeds’, including stinging nettle, our horizons are broadening. South Africans are way ahead of the food curve here.

“Necessity is the mother of invention,” they say. Or, in plainer terms, “Boer maak ’n plan”. If South Africans ever needed a slogan of some sort, this should be it.

Even in our food culture; the most-valued dishes originate out of necessity – even poverty – rather than excess. It’s not something we should be ashamed of; on the contrary. Authentic South African recipes are never complicated or expensive, rather a celebration of what is available and how to glorify that.

Think of pap – maize meal, water and salt – that can be cooked together in a myriad ways. Or milk. We’ve learnt to use every phase and stage of this natural ingredient in the most delicious ways (butter, amasi, milk tart, buttermilk…. the list goes on).

Morogo, a collective Sesotho and Tswana word referring to “leafy green vegetables”, is another perfect example. Plus, you don’t even have to own a cow to have access to this local staple. In fact, it costs nothing. It’s free. Mahala. If you know where to look, you can literally pick this nutritious African staple from the side of the road.

It is seasonal and sensitive to frost, so finding it in winter is a challenge. It grows in the rainy season or just after good rains and is present all over the country, but abounds in the plainlands next to the road or on the banks of crop fields.

In Venda, morogo is known as murugo, while some Xhosa-speaking South Africans, including celebrity chef Siba Mtongana, also refer to morogo as “imfino”. Farmers refer to the plant as “hanekam” and in some parts of the Eastern Cape, it’s also known as “tyut”.

Whatever you choose to call it, the plant and dish (of the same name) always invoke a flood of nostalgic food memories for South Africans.

Like for Gomotsegang “G” Modiselle, co-founder of The Hot Skillet in Bree Street, Cape Town. He remembers his mother’s version made with BBQ spice and tomatoes.

“We lived in Pretoria, so it was harder to come by. But my aunt used to bring it for my mom from Phokwane in Limpopo. My mom would treat it like it was gold.

“It’s got a very earthy taste… and if you don’t clean it properly, that’s exactly what you will be eating…… a mouthful of earth! Cooked the traditional way it brings a different flavour profile to the plate and palate,” he says.

The plant can often be mistaken for a weed. Which also makes it easy to mistake actual weeds for the real thing. As kids, growing up on the farm, we learnt that the hard way… We used to play “poppe huisie” (a farm version of house-house, I guess, but very, very elementary. We’d lay out old bricks on the ground like a blueprint, and divided up different “rooms” by drawing lines in the sand with sticks).

Anyway, in this “poppe huisie” kitchen, we’d make a real fire and cook real meals in a real black pot. Half-size, mind. Some of the favourites included Imana mince (stolen from our parents’ pantries) and cabbage. Freshly caught pigeon. And our favourite, self-harvested morogo or “tyut”, as it’s known in our region.

Our parents always politely declined a helping of our “morogo”, probably because we were actually cooking plain old common weeds… they just didn’t have the hearts to tell us. We couldn’t be deterred by the bitter taste of our homemade thistle stew, however.

In defence of our childlike optimism, morogo is sometimes regarded as a weed by gardeners who are unaware of its delicious and healthy qualities. Nowadays, following a study on the various edible “weeds”, including stinging nettle, our horizons are broadening. As always, South Africans are way ahead of the food curve here.

A weed known as pigweed or lambs quarters (which we most probably mistook for tyut as kids) has also been used for eating by Xhosa cooks for many years.

According to Fundiswa Matoto, a Xhosa cuisine expert from the Fish River Valley in the Eastern Cape, pigweed is referred to as “imbikicane” and used alongside spinach or tyut in a dish similar to morogo.

In fact, the term Morogo is used colloquially to refer to a group of at least 14 different dark green leafy vegetables of similar taste found throughout Southern Africa. It’s also known as wild or African spinach.

“Spinach is tasteless,” she says. “When you cook it with other ingredients, it loses all flavour. Tyut is not like this at all. It has a bitter undertone, which adds dimension and depth to the whole dish, especially when cooked with onions.”

Traditionally, before the convention of sunflower oil, rendered goat or sheep or beef fat was used in the cooking process to fry the onions, and to add an umami flavour. Nowadays, some cooks still add store-bought Holsum cooking fat or butter for flavour.

Fundiswa’s recipe for success uses sunflower oil, but starts with the same warning as that of G’s mom.

“You must wash it very well, to remove all the dirt and grit,” she says. “Otherwise you will taste it.”

The trick to identifying the right morogo, she says, comes with experience.

“Once you know what real tyut looks, you’ll know it when you see it. It looks a lot like a potato plant’s leaves. But you must only pick and use the leaves for eating, the stems are tough.

“And then you cook it in a pot with a little water. Don’t cover the leaves in water, as this will cause them to lose their green colour.

“When you add the maize meal, you have to cook a thick and sticky pap so that you can easily pinch and eat it with your fingers,” Fundiswa says.

This, for me, was always the best part; sitting down in the sun with the ladies for lunch and eating with our fingers from a communal bowl of morogo.

Chef Siba once referred to this eating ritual in her BBC food series, Siba’s Table, while making a modern version of the dish – Mfino Fritters.

“I grew up eating Mfino as a child, especially in summer,” she remembered. “My mother used to make it as a midday snack for us to have on our way back from school. It’s typically eaten by women rather than men.”

She tells of how her mom made her mfino – a taste of her childhood – to strengthen and comfort her when she had her first-born child, Lonwabo.

Coming off a Women’s Month week of hell in South Africa, I wish I could make a bowl of morogo large enough to comfort and strengthen every South African woman in this country.

4 cups freshly picked Morogo aka Imfino aka Tyut, washed very thoroughly (can be substituted with spinach)

First, fry the onions in the 3 tablespoons oil and remove from the pot. Keep both the onions and frying oil. Add the washed tyut and water and cook, with the lid on, for about 5 minutes. Season well with salt and pepper. Add the fried onions plus the cooking oil.

Add the dry maize meal bit by bit. Stir well until it binds or your desired consistency is reached. Stir well to make sure there are no lumps and the maize does not burn (it’s okay if it sticks to the bottom a bit, this makes for a good flavour). The water in the pot should be enough to create the right consistency for the pap. If needed, add more water to create a sticky, thick pap. Lastly, add the last 3 tablespoons of oil and mix through.

Season with your spice of choice and serve warm. DM