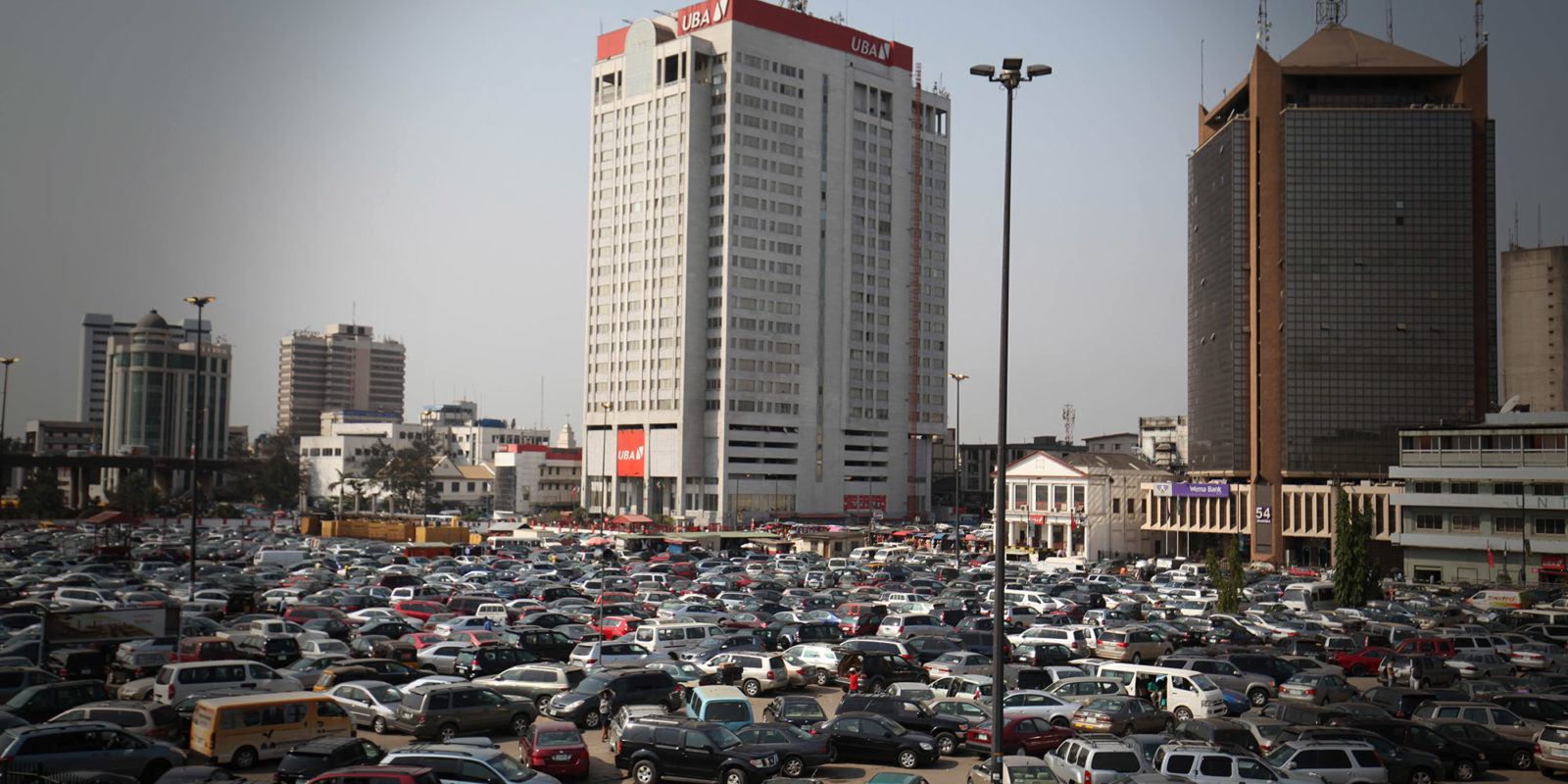 A sea of vehicles at a parking lot in downtown Lagos, Nigeria, 10 February 2015. EPA/AHMED JALLANZO

Nigeria’s largest city, Lagos, is buzzing with economic activity and its GDP will soon overtake that of Johannesburg. But it has to do something dramatic to sort out its clogged roads if it is to move forward.

Nigeria’s Murtala Mohammed International Airport is typical of Lagos. It’s noisy and crowded, but also functional. Besides the jarring sound from what seems to be a broken speaker system, Lagos welcomes you with a buzz that is hard to ignore. People navigate its hallways with determination and occasionally bump into each other with an absent-minded “sorry.”

You know from the start that you did not come to sleep; there are things to be done. The business of the Lagos airport is not without reason. The airport sees on average six million passengers a year. In 2016, about two million tourists brought in receipts of more than $1-billion. Although people complain about the challenges the city poses, Lagos is still the place to be.

For visitors, Lagos offers many rich cultural experiences and its nightlife is like no other. For entrepreneurs and businesses, its 21 million inhabitants are a sought-after market. With an estimated GDP of $90-billion (2014), Lagos was Africa’s seventh-largest economy, ahead of Kenya and Cote D’Ivoire. By 2035, it is projected to overtake Johannesburg to become Africa’s second-largest city, after Cairo, by GDP.

Over the past 25 years, Lagos has doubled in population to more than 21 million. By 2100, Lagos is also projected to become the world’s largest city with an estimated population of 80-100 million people. Its huge population offers it scale and the potential to become an economic powerhouse, not just for Nigeria, but for the continent as a whole.

Yet, time and time again, Lagos seems to fall short. For the outsider looking in, transportation offers a lens into Lagos’s woes.

The city needs a more supportive environment that creates the conditions for policymakers to see projects through and innovators to easily access finance to scale up their ideas. A recent paper by the Brenthurst Foundation highlights the chequered division of responsibility between the three tiers of government as the main reason for Lagos’s poor road infrastructure. The federal government has jurisdiction over 5%, the local government authorities 36%, and the national state 59%. As a result, depending on who did what, your journey could be smooth – or very far from it. Transportation in the city is not just a standalone issue but part of a larger developmental problem – a city with insufficient coordination in its software and hardware components.

Lagos’s software – intangible infrastructure – appears to be a double-edged sword. For the select few for whom it works, it’s great; for everyone else, it can be stifling. The city’s challenges range from a lack of government integration across different levels of governance, deeply-rooted corruption, excessive red tape, and a general lack of responsiveness. With its hardware – tangible infrastructure – Lagosians battle with inefficient road networks, insufficient housing (Lagos has a massive housing deficit of between two and five million units), poor electricity access (despite its status as Africa’s largest oil producer), and deplorable waste management (up to 1.2 million Lagosians do not have access to a waste collection service). About 8.5% of the population live in poverty, and two-thirds of Lagosians are urban poor who live in slum conditions.

Road infrastructure shortcomings have gained Lagos a global reputation. On a daily basis, up to two million vehicles share the 7,598km of state road with motorbikes, freight vehicles, hawkers and pedestrians. Additionally, the number and depth of potholes on Lagos’s main road is a huge inhibitor to movement. Its headache-forming traffic congestion and unrepaired potholes not only waste your time, but also reduce efficiencies along the value and supply chains of every business.

With the majority of people moving across the centre of commerce, Victoria Island, on one end of the city to the mainland where most people live and the city administration is housed, rush hour is nothing short of chaotic on the three bridges that connect the two. The bikes and cars that transport the city’s ogas (bosses), masters, madams and “hey, come heres” are subject to a mix of bumpy and organ-shifting potholes that slow traffic to a snail’s pace, if at all. Lagosians spend three billion hours in traffic yearly with the average person spending four hours a day in traffic.

It is no surprise that the 2018 World Economic Forum Global Competitiveness report ranks the quality of roads in Nigeria at 132/140. For Africa, where population numbers will increase twofold to two billion by 2040 and where 800 million people are expected to pour into cities in the same period, a coordinated effort is needed across cities to plan and deal with the challenges of urbanisation.

A chat with Lucky, a kind driver, highlighted the stark reality of getting around Lagos. According to him, transportation is one area where Lagos is failing. In his previous life as a bank officer, to get to work for 8:15am (at which point you are late, by the way), he had to leave home by 5:30am at the latest. In order to get home without the insanity of Lagos traffic on the mainland bridge, he had to leave before 3pm or wait till 9pm. As a result of this, he adopted a lifestyle of staying on the mainland during the week for most weeks to avoid the waste of time, insults, sweat, and frustration of traffic congestions. While beneficial, this can pose strains on family life – if you are unLucky.

However, companies like Max.ng are championing faster movement with a claim to “Reduce your daily commute time by 70% on a safe and affordable Okada [motorcycle].” Their uniquely painted motorcycles dot the streets of Lagos and their planned investments in electric motorcycles indicate their forward-thinking nature.

While great, road travel can evidently no longer support the expanding population – not in its current state. The increase in its urban population – as with other African cities – has placed great pressure on existing infrastructure, a presumed higher burden on the city’s limited resources, and faster dilapidation through overuse of roads. Capitalising on Lagos’s abundant waterways could be an option. As one transportation expert said, “only about 10% of Lagos’s population use the waterways and given that Lagos is surrounded by water, a huge opportunity exists that is not being exploited.”

Lagos is surrounded by large water bodies (25% of Lagos is water), so waterways present a huge opportunity to manage traffic movement. In fact, the use of water transportation is not new to Lagos. During its heyday as the federal capital of Nigeria, ferries plied the routes from Lagos to places like Apapa and Ebute-Ero. Even now, 12 routes run across Lagos’s waterways, but many of them are underutilised and lack the updated technology and support services to be of benefit to its population.

That is not to say nothing is being done: local government is not oblivious to the city’s woes and has made strides to capitalise on this. Initiatives like the Built, Operate and Transfer (BOT) and others of its kind seek to encourage public/private partnerships to invest in this space. But too little is being done. Excellence – which Lagos claims to be the centre of – presumes distinction, quality, making things happen, drive and persistence to achieve. As it stands, Lagos has miles to go in demonstrating excellence in building an integrated transport system – especially maximising its waterways.

Ironically, and precisely because of a lack of urgency, private operators are making moves to operationalise and scale-up water transportation. Companies like Gokada, which recently premiered a boat service called G-Boat, highlight Lagosians coming up with creative solutions to tackle the bottleneck issue in the city. Over the years, motorboat operators have shown up to ferry people across Lagos, but like the danfo minibuses on the roads, safety and security is a big issue. Lagosians need to be convinced of the safety and efficiency of this mode of transport for it to flourish. High maintenance fees, cursory regulation around boat safety, and careless operators are but a few of the issues that need to be overcome.

Perhaps the recent report that Uber, the global transportation company, is in discussions with government and regulatory authorities to commence UberBoat services on Lagos’s waterways, will change the game. Clearly the solutions are neither hidden nor hard to decipher. Obviously, the point is not that waterways will be the silver bullet to Lagos issues, but rather that they are a part of the solution. Much of the problem lies in the absence of actual execution and a coordinated and dedicated leadership plan committed to making the changes Lagos needs.

What Lagos needs to do must involve a clear and targeted policy around waterway use and management that can withstand all the political shocks that come with new leadership at the state and local government level.

This is where Lagos can learn from the experiences of places like Rabat, Morocco where, within a 20-year span, huge infrastructural developments have surfaced through a combination of strong leadership, consistent urban policy, and delivery. Previously characterised by high unemployment and extensive slums, Rabat now shows evidence of strong economic and social progress achieved through consistent policy and fixed objectives.

The pivotal embrace of more decentralised governance structures and well-thought-out strategy on public/private investments helped reshape the city, and concurrently carries about 110,000 passengers per day and more than 32 million passengers each year.

Not that Morocco did not or does not have issues – it did, and it does. The point is that “that’s Lagos traffic for you!” does not have to be the status quo. Given the impending population boom, Lagos has to start fixing up if it is to become a globally productive centre of economic activity.

In a recent letter by former President Olusegun Obasanjo to current President Muhammadu Buhari, Obasanjo highlighted the urgency around Nigeria’s security issues and the need for “cohesion and concentration of effort and maximum force”. This sentiment is one that should carry across all governance issues because, as Rabat has shown, while history may be important in defining a city’s development, it is not deterministic.

It is, beyond doubt, possible to turn a city around – even Lagos. DM

Marie-Noelle Nwokolo is the current Machel-Mandela Fellow at The Brenthurst Foundation. She has just returned from travels in Lagos, Nigeria, where the foundation is completing a documentary on the Future of African Cities. This piece is based on two longer discussion papers on Lagos and Rabat, Morocco – all available here.