Horror fatigue or not, none of us women can afford to look away 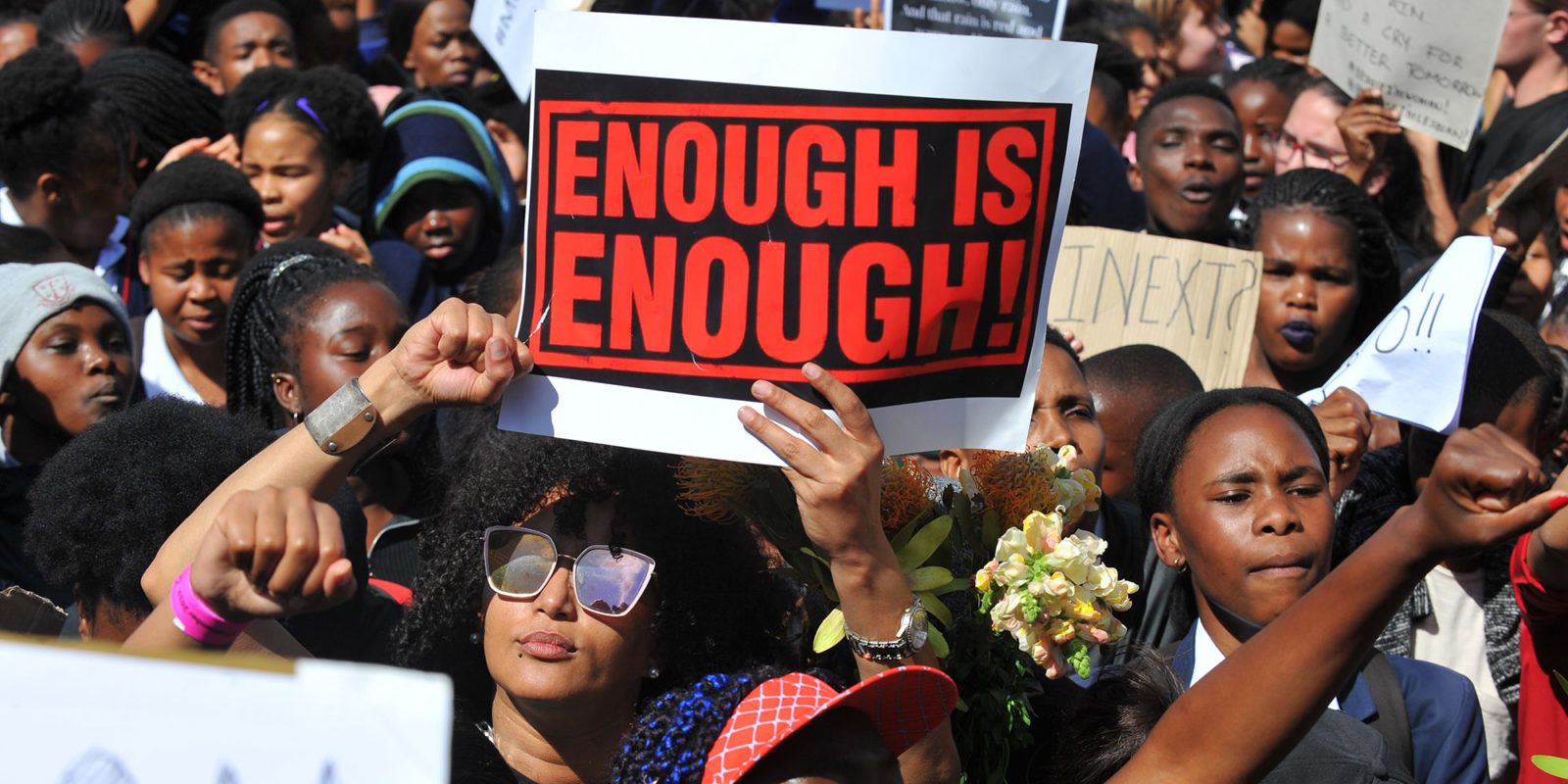 Protesters gather to hand-over a memorandum of grievances during gender-based violence demonstration outside Parliament, following the rape and murder of UCT student Uyinene Mrwetyana on September 05, 2019 in Cape Town, South Africa. While accepting a memorandum of demands from the protesters, Ramaphosa admitted that he will be addressing the issue of violence against women and children and that a state of emergency should be declared. (Photo by Gallo Images/Ziyaad Douglas)

When fatigue sets in from being forced to witness the horror we South Africans are confronted with on what seems to be a daily basis, rest, regroup, recover, but come back to fight another day.

My friend Tarisai Mchuchu answers an email I sent her: “I am well but yesterday I became overwhelmed with a lot of emotions with these women murders and rape; it can get a bit much.”

I didn’t respond to her mail, because I too am struggling with heavy emotions, the kind that render even answering an email too much to bear. I feel sad, so infinitely sad as if someone close to me has died.

Someone Tarisai and I know has died; my email had been an offer to draw up a short article for the website of Mosaic, an organisation committed to fighting gender-based violence, of which I am a board member and Tarisai the executive director. On Saturday evening after attending a Women’s Day function, I checked my emails and saw that Majid Hargey, another of the Mosaic board members had passed away the previous day and had been buried the same day in terms of his religion.

Our small board is made up of diverse people. Sometimes I think the only thing we have in common is our commitment to empowering survivors of abuse and domestic violence. Majid showed up at every meeting as a voice for fairness, advocating for justice and dignity for the people we serve, including our staff. A businessman, Majid stressed the importance of the bottom line with ways to ensure the sustainability of a 25-year-old non-profit operating in the current funding environment.

I sometimes wondered about Majid’s interest in the organisation and its work, but never thought to ask. He was not the only male on the board.

I’ve been thinking a lot of the role of men in our society in the past few days. Perhaps this is because the murder of Uyinene Mrwetyana feels very close to home. My uncle is a postman, based at the Clareinch Post Office. According to him, no one who knows this colleague of his, the man who’s confessed to raping and killing Uyinene, can believe that he’s capable of such horror. But of course, this is a story we’ve all heard before.

The man who on 15 August 2019 finally admitted to stabbing my mother multiple times was another such man. In his failed bail hearing, Tyrone Prinsloo’s twin sister spoke about how everyone back home “thought it was a joke” when they first heard about the crimes he had been accused of, accused being the crucial word, because he was incapable of such actions, she believed.

How I’d wished that it had indeed been a joke or some weird dream when I watched the doctors in the emergency room battle to save my mother’s life. I had neither the luxury of mirth or make-believe then.

So, as much as I’ve been thinking about men as the perpetrators of violence against women, for the past year, I’ve also been thinking of the women who stand with them, support them or in the instance of Prinsloo’s wife, withdraw charges against them, leaving them to offend again.

I wish I had answers. I wish I had a safe remove from violence and fear, but what South African woman does? I could never imagine that my mother would become a victim of gender-based violence when I first joined the board of Mosaic, but thanks to them, I was supported – by Tarisai, who is an advocate and came to court to support me and my family when she was able to, and the court support workers who joined us in protesting against the granting of bail to Prinsloo – a fight we won.

On 15 August, Prinsloo pleaded guilty and accepted a plea deal of 15 years of which three years will be suspended, but I can’t say whether anyone won. While my family got closure and were spared a longer trial, perhaps he’d have been given a longer sentence were the case to have gone to trial.

Maybe. Or so I thought until I saw the 10-year sentence handed down to Reghard Groenewald for the murder of Hilary van Rooyen, his friend’s mother, in her own home. I’ve learnt a lot during the months it took to bring my mother’s attacker to justice: the importance of protest, the use of media both traditional and social and how crucial it is for the voices of victims and survivors to be heard in the court.

My family was lucky to have access to people like Tarisai and others working as prosecutors and defenders. My mother is a children’s book writer and so there was some media interest in her case because of this. Crime against women is so endemic in South Africa that so few stories make their way to the general public without an angle.

There are enough stories of horror that do make the newspapers. In the past few days, in addition to Uyinene, I’ve read about Jesse Hess, Lynette Volschenk and Janika Mallo – all women or girls murdered in Cape Town, the city where I live and that’s not counting the women whose stories never made the newspapers I read, or those in the rest of the Western Cape, the rest of South Africa.

None of us women can afford to look away. We no longer have the luxury of disbelief – not him, not true. Not my partner, not my brother, not my nephew, not my uncle.

Think about the men you know and hold them to account. Examine your own complicity.

Men too, have a part to play. You don’t need to join a board to support women and their right to peace and safety. A good place to start is to reject the normalisation and acceptance of abuse against women and children each time you witness it.

And when fatigue sets in from being forced to witness the horror we South Africans are confronted with on what seems to be a daily basis, rest, regroup, recover, but come back to fight another day. Our country is at war. We can either be fighters or fodder. DM

Maxine Case is an author. Her first novel, All We Have Left Unsaid, was awarded the 2007 Commonwealth Writers’ Prize for Best First Book (Africa) and was the joint winner of the Herman Charles Bosman Prize. She is currently a mentor on the University of Iowa’s Women’s Creative Mentorship Project and recently completed her first screenplay.