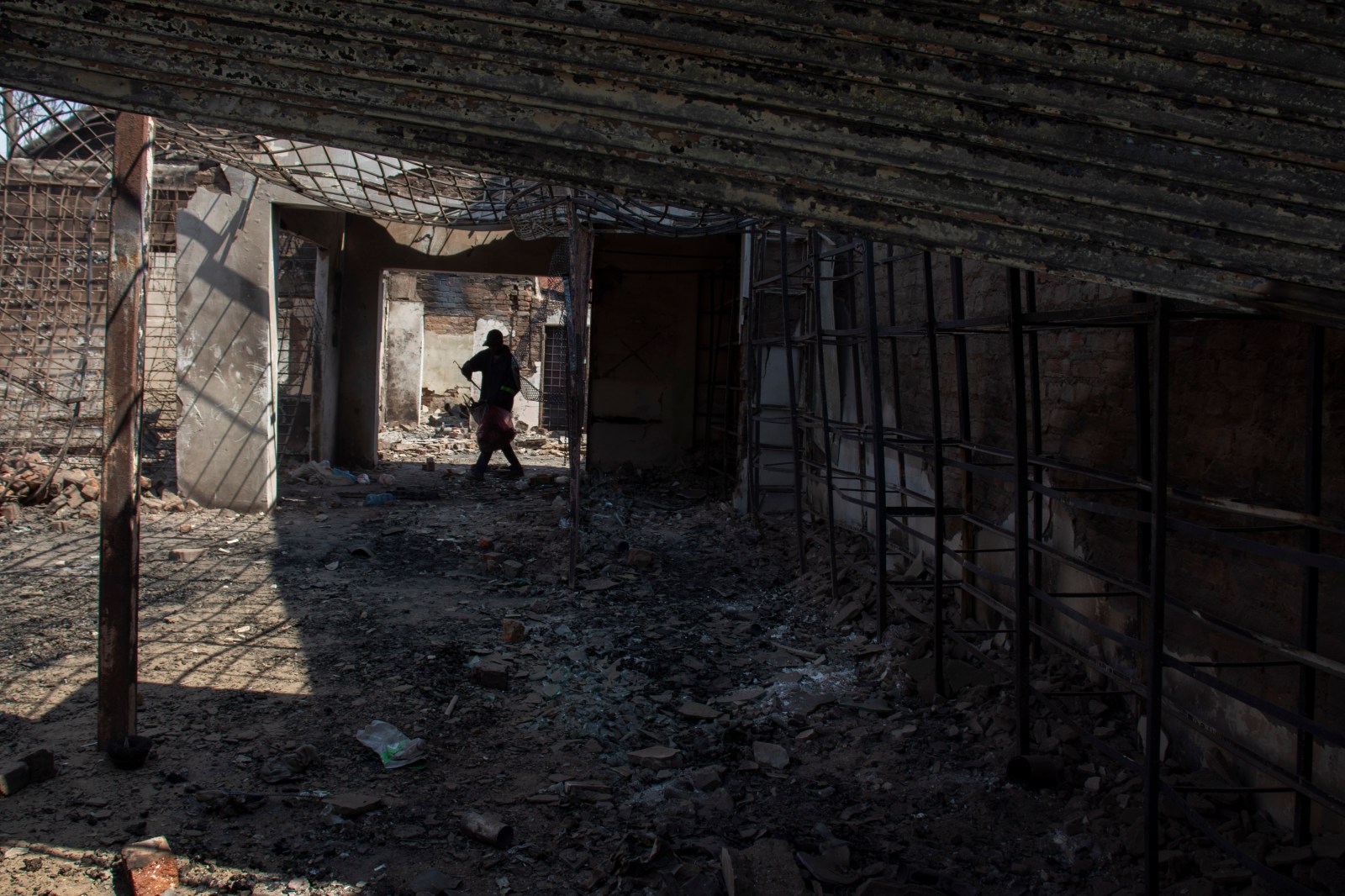 The shops at the Pan Africa shopping centre in Alexandra, Johannesburg were looted on 3 September 2019 and subsequently set alight. Some residents walk through the burnt remains of these stores looking for scraps of metal. Photo: Aisha Abdool Karim

Mob violence, looting and xenophobic attacks in Gauteng had calmed by Friday but had left 497 people arrested since Sunday and seven deaths. With such outbreaks occurring almost cyclically, authorities have been urged to finally make a plan.

A property owner stood outside what used to be a supermarket on 1st Ave, Alexandra, before it was looted this week. It was one of the only stores on the strip that hadn’t been burnt down.

“We have been here in the 1976 riots. The 1986 riots, we were around here, and this is by far the worst,” he said on Thursday while defending his property from the scrap metal collectors dismantling what was left of the neighbouring razed buildings. He did not want to be named.

Police say the mob violence, looting and xenophobic attacks that started in Jeppestown on Sunday and spread to areas such as Malvern, Thokoza, Tembisa, Germiston, Alexandra, Tshwane and Katlehong had calmed by Friday, with 497 people arrested throughout the week.

SAPS said 11 people were killed during the violence and seven of those fatalities had been directly linked to the attacks.

On Thursday, two bodies were said to still be smouldering under rubble in another burnt store on Alexandra’s 1st Ave as scrap metal collectors nearby pilfered what they could. Police reportedly could not remove the bodies while they were still burning.

Further up the road, the South African property owner said he was risking his life while standing on guard. He claimed police did not respond to calls to protect the stores and it took hours for looters to first break the steel barriers before they spent another few hours looting over Monday evening and Tuesday morning.

“Seeing that the authorities are not doing anything, what guarantee is there that they won’t do it again three months down the line?” he asked, suggesting owners on the strip may decide not to return.

In a statement on Friday, SAPS thanked various government and community groups for helping stem the violence and said police officers would be deployed to the hotspots as long as it would be necessary to prevent the violence.

“It is important for all to note that had the public chosen to ignore the calls for restraint, things could have turned out worse than they are right now,” said Gauteng Provincial SAPS Commissioner Elias Mawela.

Mail & Gaurdian on Friday reported the violence was allegedly orchestrated by the All Truck Drivers Forum (ATDF). The newspaper said ATDF had met with various communities across Gauteng to discuss attacks on foreigners.

The ATDF has called for citizens to replace foreign truck drivers. There have been widespread attacks on foreign drivers this year, particularly across KwaZulu-Natal and Mpumalanga. The ATDF has denied it was responsible for either the recent outbreak of violence or the attacks on trucks and drivers.

The report also said intelligence agencies informed government’s Justice, Crime Prevention and Security Cluster of the planned violence this week, but it failed to act and prevent the attacks. Police Minister Bheki Cele’s spokesperson Lirandza Themba said Cabinet had discussed the information and violence and was meeting frequently to arrest the violence.

“The criminal justice system is ready to deal with perpetrators of violence, looting and lawlessness.”

Whether purely criminal, xenophobic, or a combination of both and other factors, the motivation for the attacks continues to be debated, but both South Africans and foreigners have been killed and properties have been attacked at random.

In Alexandra on Thursday, community members claimed a group from the local Madala Men’s Hostel were behind the attacks while others joined in. Community members made similar claims about the Wolhuter Hostel in Jeppestown.

“We did it because we saw an opportunity to put food on the table. We did not break or burn any store. We simply took the chance to provide food for our families,” a man involved in the looting, who preferred to be known as Sonnyboy, told Daily Maverick in Alexandra.

He claimed the hostel group was motivated by xenophobia while unemployed residents like him saw the chance to loot.

Alexandra resident Benjamin Ndlovu condemned the attacks but said crime was rife in the area and many residents were unemployed.

“The community was encouraged when they saw the looting and their actions were buoyed by the skimpy police presence,” Ndlovu said.

Attacks targeting foreigners have been a common occurrence in South Africa, the most well known being the 2008 xenophobic violence that left over 60 people dead. But they have a long history; “Operation Buyelekhaya”, aimed at driving away foreigners, began in Alexandra and lasted between December 1994 and January 1995.

“South African authorities must stop fueling xenophobia in their desperate attempt to win political support. Rather, they must build a country that is rooted in respect for human rights and the rule of law that protects everyone,” said Amnesty International South Africa executive director Shenilla Mohamed.

“South African authorities must come up with a security plan to ensure the safety of all refugees and migrants and seek to end these attacks once and for all. That begins with holding suspected perpetrators of past xenophobic crimes to account and breaking this cycle of impunity,” she continued.

Cele is due to meet community leaders at the Jeppestown hostel on Sunday. DM