By Kimberly Mutandiro for GroundUp• 5 September 2019 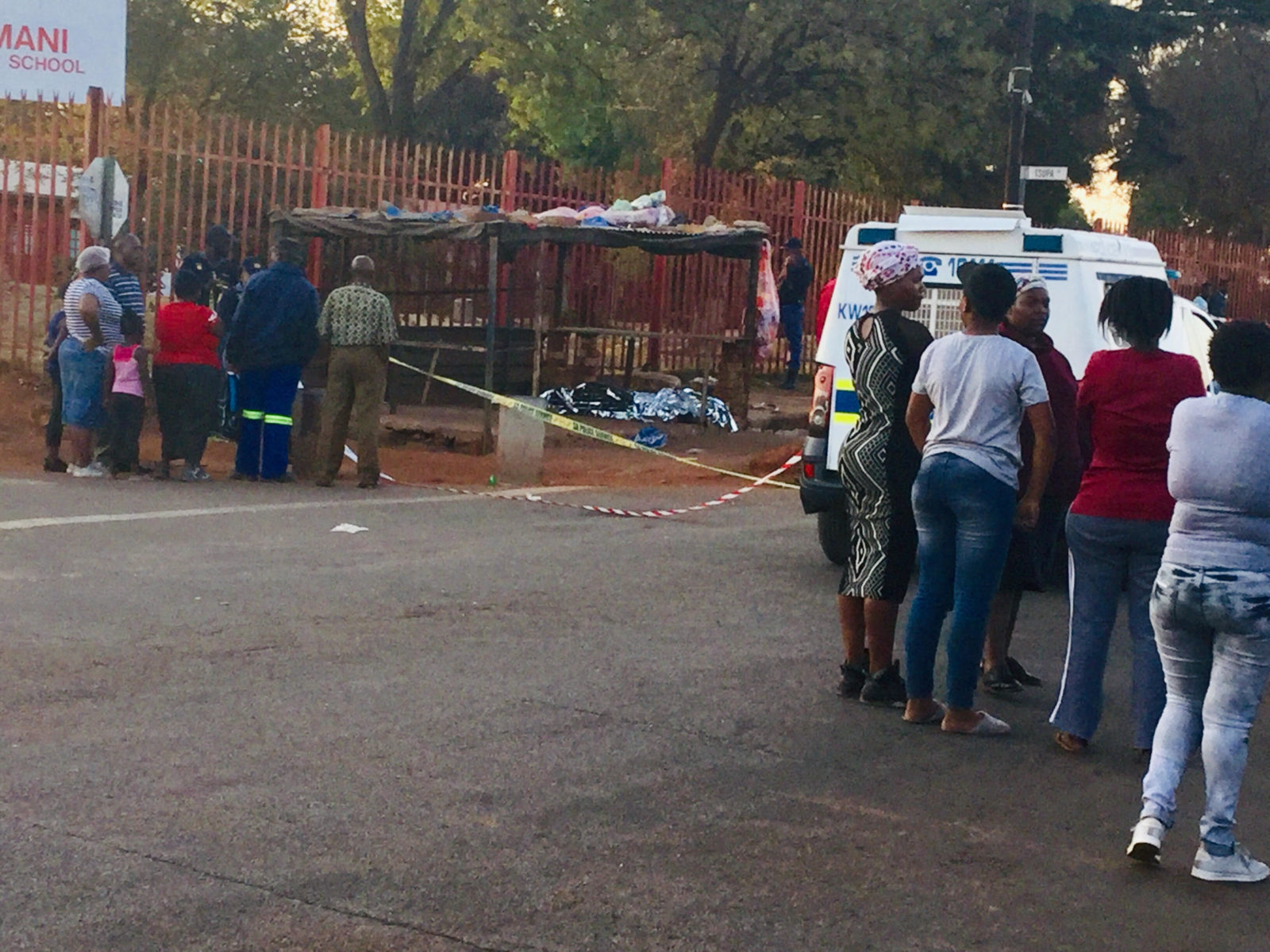 The man who allegedly shot him was trying to defend his tenant, a foreign shop owner, by shooting randomly. By Kimberly Mutandiro for GROUNDUP

A man lay dead, covered by a silver wrapper, while his relatives wept in the White City section of Kwathema township in Springs on Wednesday. Police and residents gathered around the marked area.

Witnesses say the shooting happened at about 3pm when a landlord tried to protect his tenant, a foreign shop owner. The victim lived about 3km away and was apparently coming from a shop when he was shot. Kwathema police later said that he was 24 years old.

A 45-year-old woman was shot during the same incident and taken to hospital, according to police.

“It is alleged that a group of people wanted to attack a shop owned by a foreign national. The landlord came out to rescue the shop owner. He warned and threatened the group of people that were outside his yard. A fight ensued. When he saw that he was overpowered he took out his licensed firearm and started shooting randomly,” said a police statement.

The suspect has been arrested, the police said.

Nonkululekho Moage, a relative of the arrested man, said: “This violence against foreigners is getting out of hand. Innocent people are being shot. Our brother fired the gun in self defence. He was trying to defend our home.”

Moage said that after the shooting they received warnings that their house would be burnt down.

Vans were witnessed dropping groups of men who had come to loot shops in the area. Residents say looters were not from their area; they had not seen them before.

‘Welcome to South Africa, a place where foreign nationals are tormented’

He had not yet called the police. Looters had not only taken his stock, but also his money.

“They said I must go back to my country because l am an illegal foreigner. I showed them my asylum permit but they laughed at me,” he said.

Ayelo said he had closed his shop earlier when people told him that looters were coming. However, he said they managed to break the security door of his rented room and forced him at gunpoint to open the shop.

“While some looted my shop others turned my sleeping quarters upside down. They took all my money.”

He had operated his shop for five years. It had never been looted before.

“Now reality has been knocked into my senses,” he said. “When I called my friends and told them that my shop had finally been looted, they said: ‘Welcome to South Africa, a place where foreign nationals are tormented’.”

A night of gunshots

In the early hours of the morning on Thursday gunshots were heard across the township. Looters tracked down and emptied foreign-owned shops. Residents we spoke to said they had hardly closed their eyes during the night as guns were fired.

“We could hear shooting and voices all night. Many shops around our section were broken into during the night,” said Gloria Mokoena, who resides in Kwathema’s Highland section.

Earlier on Wednesday evening GroundUp drove around Kwathema. A mob had gathered near the men’s hostel. They chanted while burning tyres. DM