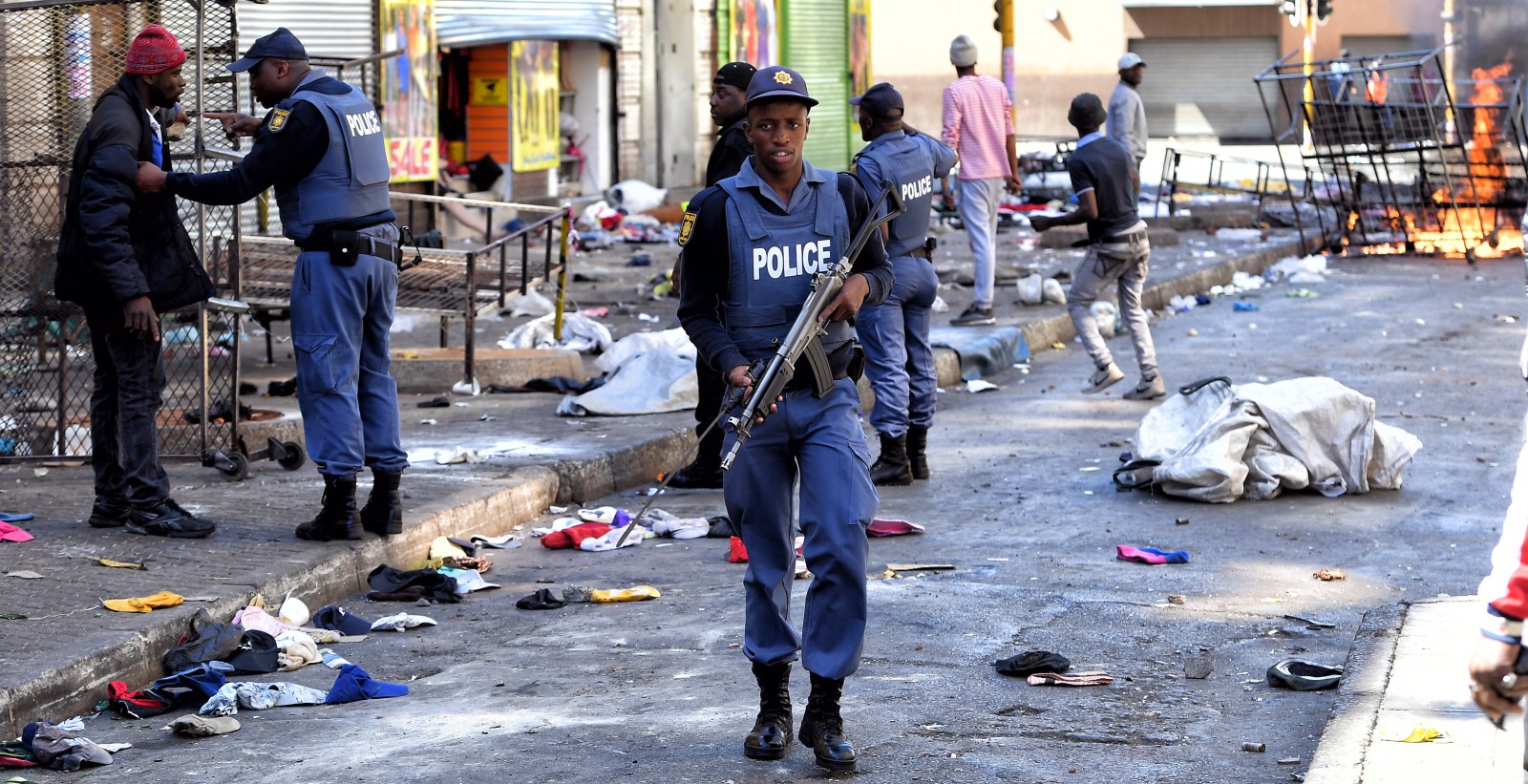 Looting of foreign owned shops took place in Malvern,Turfottein and johannesburg CBD,the situation in most areas remained tense with most shops being vandalised foto Felix Dlangamandla/Netwerk24

Mobilisations are misguided. By making migrants the centre of these discussions, middle-class activists are alienating the poor and drawing lines in the township soil.

Denial ain’t just a river in Egypt. Xenophobia is real. Xenophobic violence kills. No matter how much South Africa’s political leaders deny it, South Africa has all the hallmarks of a table-topper in the xenophobia league.

But while South Africans are quick to condemn US President Donald Trump and the Europeans for their racism against Africans, where is the mobilisation? Or, more precisely, why have past mobilisations failed to deliver on their promises of “never again”?

Ironically, the answer is that the mobilisations are misguided. By making migrants the centre of these discussions, middle-class activists are alienating the poor and drawing lines in the township soil.

When visible violence flares – most happens beyond the media gaze –migrant rights organisations stand up and demand that the government condemn the attacks and recognise the common humanity of our neighbours. The Constitution, after all, promises the country to “all who live in it”. A few others temporarily join the chorus before distractions draw their attention elsewhere.

To be fair, South Africans are generally distracted. Whether it’s the military occupation of the Cape Flats, violence against women, or perennial poverty, those in privileged positions tend to just get on with their lives and leave the activism to, well, professional activists. Some of this is understandable fatigue. Who in the past few days hasn’t longed for puppy and kitten videos to repopulation their newsfeeds? Here’s the one I was watching yesterday. There is only so much one can take.

Part of the explanation is that many South Africans see “xenophobia” as a legitimate hate. Others fail to see it as akin to the racism and exclusion so many South Africans continue to suffer. Ironically, many claiming to “decolonise” the country’s institutions often reinforce its colonial borders. Many accept the proposition Mangosuthu Buthelezi propounded all those years ago, that immigration spells the end to positive transformation. Rather than condemn the hatred, violence, and empirically unfounded vitriol about foreigners threatening South Africa’s economic and physical security, our political leadership has responded by implementing and proposing policies that legitimise such hate.

Part of the explanation is in civil society and how it is structured. As not-for-profits, civil society organisations are largely bankrolled by external actors both foreign and domestic. To get funding, they position themselves as voices for the marginalised and excluded. Or, more accurately, for particular segments of the poor and politically disenfranchised. They engage in the marketplace of ideas with their particular constituency’s interest front and centre. As they do so, they position and profile themselves by framing issues to privilege their expertise. I know how this works. I have done it myself.

Yet, all this works against what is needed to fight xenophobic violence while promoting social cohesion and the rule of law. What’s behind this gangsterism is not immigration, but township governance. Moreover, the discrimination we have seen over and over stems from linguistic, ethnic, and political differences among South Africa’s citizenry. About a third of those killed in “xenophobic” violence since the mid-2000s are citizens. By making this about immigrant rights, we ignore the citizenry who should be fighting in solidarity against discrimination.

Perhaps more importantly, framing xenophobic violence in terms of immigration is doing the work of the hate-mongers. Heavy-handed anti-xenophobia campaigns aimed at protecting the rights of foreign minorities risk drawing them out into the open, enhancing their visibility, and making their foreignness the issue where it might not have been. The campaigns naturalise the line between citizen and foreigner and reinforce the connection between immigration and competition. In doing so they draw attention away from the reality that the most violent and fraught displays of xenophobia are often rooted in local – municipal, township, or even neighbourhood – battles for land, jobs, or political office.

In this case, condemnation from the outside is rarely effective for local leaders who play on narratives of exclusion and marginalisation. A campaign led by relatively privileged international and domestic NGOs – or even migrants themselves – chastising xenophobic firebrands for their nationalistic sentiments may just be handing them a Molotov cocktail. After all, what serves their purposes more than being scolded by cosmopolitan elites or immigrants for trying to protect “national values” and cultures? Such an approach may only help harden cultural and political battle lines. If the condemnation and action against those inciting or leading violence are not domestically driven, we are likely to fan rather than douse the fires of hate.

Effective interventions and mobilisation must address the incentives for anti-outsider mobilisation. This is especially critical in places where international migrants suffer similar forms of deprivation to the citizens who live around them (many who are migrants themselves). If one wants a recipe for heightened hatred and resentment, campaigns that target foreigners for assistance and protection while ignoring other marginalised categories might just be it.

Working quietly with local authorities and leaders – elected, appointed, or self-appointed – to facilitate local, grassroots initiatives to create pressure and incentives for more inclusive societies may be one way to go. Beyond this, we need to look at the electoral laws and municipal budgeting systems in ways that reinforce local capacity and accountability. And the police? Shifting measures of success from arrests to crime-fighting could limit the incentives to round up people who have done little more than sell tomatoes without a permit.

We need to look to build solidarities, not silos. This does not mean abandoning our righteous indignation or commitment to tolerance and inclusion, but it does mean crafting a careful approach to ensure interventions and activism don’t do more harm than good. DM

Loren B Landau is the South African Research Chair for Mobility and the Politics of Difference with the African Centre for Migration & Society at Wits University. He previously served as board chair with the Consortium for Refugees and Migrants in South Africa.