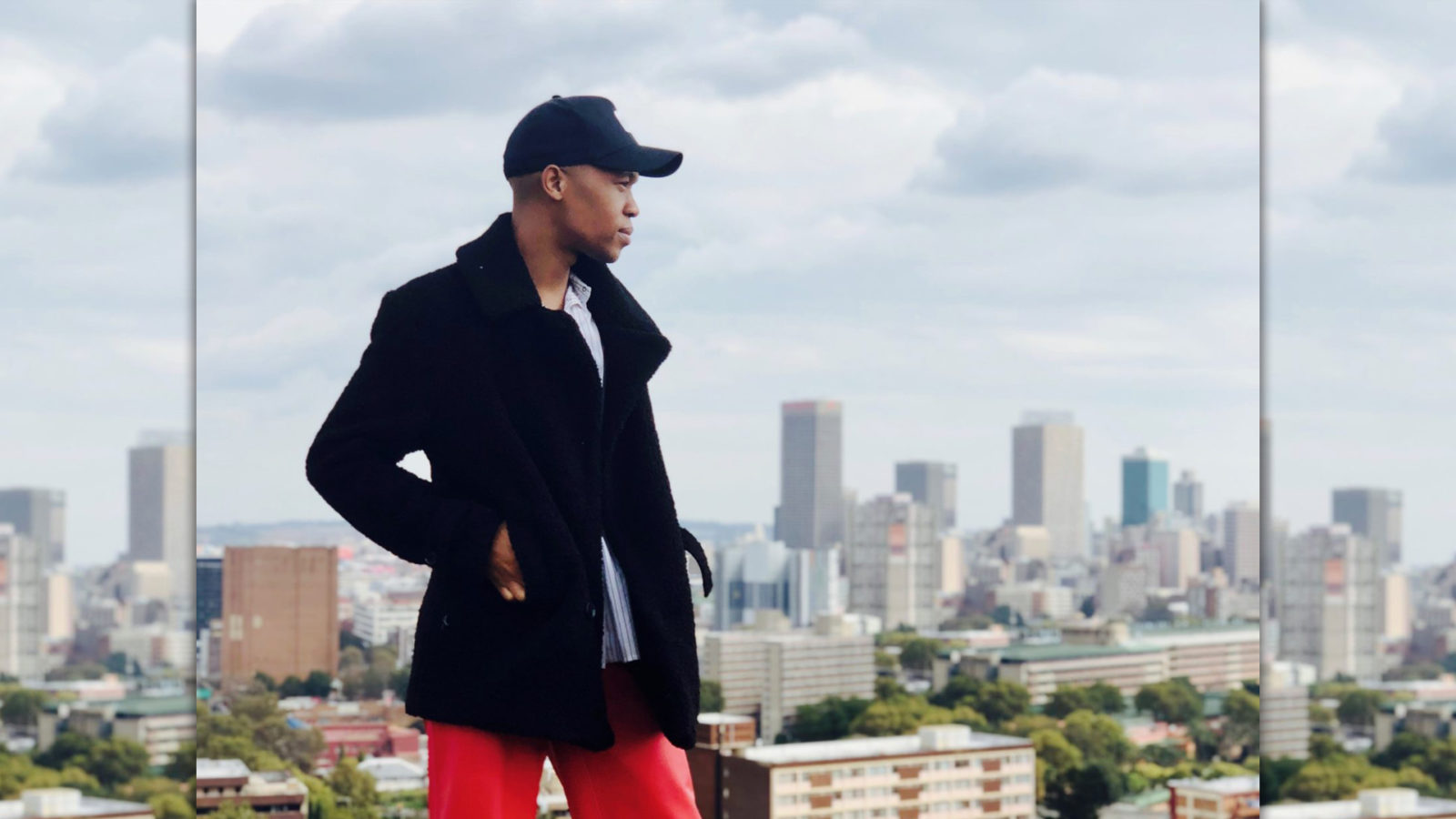 Launched in November 2013, the LVMH Prize was created by the French luxury conglomerate to celebrate young fashion designers from around the world and help them propel their career. This year, the prize was awarded to a young South African designer from Johannesburg.

Thebe Magugu had had a busy year: after he won the 2019 International Fashion Showcase, he was announced as one of the eight finalists for this year’s LVMH Prize. The designers selected – including Nigerian Kenneth Ize, British designer Bethany Williams and Hed Mayner from Israel – had to present a collection to more than 63 judges including Dior creative director Maria Grazia Chiuri, Louis Vuitton creative director Nicolas Ghesquière, US designer from the eponymous label Marc Jacobs, and the executive vice-president of Louis Vuitton, Delphine Arnault.

Back in June, Magugu explained that he already felt that the experience itself – including presenting to the judges and fashion gatekeepers – was exceptionally satisfying, as it had given him access to some of the most influential gatekeepers and players in the fashion industry.

Watch The Artistry, our interview with Thebe Magugu, back in April 2019.

On the day of the interview, Thebe Magugu arrives early at the hotel, dressed from head to toe in deep navy blue (an outfit he designed himself). He is focused and gentle, and when he sits and talks about his journey into fashion, especially over the last two years – Magugu’s eponymous line launched in 2017 – exhaustion is but a passing haze over his eyes.

Yet, the young designer doesn’t have much time to rest now: since the announcement of his selection in the LVMH (Moët Hennessy Louis Vuitton) Prize, he has had to give countless interviews while working on his selection and making sure he is ready for the next stage of the competition. He is also followed by a TV crew from Rai, the Italian national TV channel, demanding his unswerving attention; he juggles fittings with models, last changes on the collection – which include running around for new trimmings – and Skype calls with his mentors, appointed as part of his selection and win at the International Fashion Showcase (IFS), the biennial fashion exhibition held at Somerset House in London, in partnership with the British Council, British Fashion Council and the London College of Fashion.

In Johannesburg, where Magugu lives, he often gets stopped for impromptu conversations: friends, fans, acquaintances, former collaborators; with each, he pauses, listens and chats, any sense of urgency on hold. For a country where fashion is said to still be in its infancy, and where manufacturing challenges are overwhelming, Magugu carries with him the promise of a brilliant future, a feeling for things to come that will certainly pave the way for his career but also for the many who come after him; he is also a reminder of how things have changed in the last five years and how some African designers are slowly but surely making their marks not only here, but also on the international stage.

Born in 1993 in Kimberley, Magugu is incredibly determined: “My biggest fear is not to achieve all the things I have set for myself,” he says. Both his mother, Iris Magugu, and his aunt, Esther Nenungwi, praise his unconventional childhood (he was always inside, cutting and drawing) and his creativity. Driven by their and his late grandmother’s love, pride and support, he went on to study fashion design and photography at the Johannesburg Fashion Design School & Retail Education Institute – LISOF, exploring ways to share his culture, own aesthetics and creativity through fashion.

Back at school, he created a 100-page bookzine called Little Black Book, a collage of personal studies and reflections, and a thought-provoking window into the South African youth, featuring childhood friends, fellow designer Tsepo Tsotetsi, photographer Trevor Stuurman, and R&B artist Lucille Slade. After his graduation in 2014, he launched the first collection and in 2015, was part of the Africa Fashion International (AFI) Fastrack programme. Magugu also collaborated with Rich Mnisi on the designer’s range for Menswear Fashion Week. In an interview with ELLE, Mnisi explained: “For our Spring/ Summer 2016/17 collection, we collaborated with fashion designer Thebe Magugu on a project titled Family Photos. Even if it was the worst of times, one can’t help but smile when looking down at old photos. Our nostalgia sparked a conversation around recontextualisation and how basic staples could be re-imagined, fashioned and even considered modern.”

In 2017, Magugu launched his eponymous label and a collection dubbed Geology, an ode to the outdoors and escaping urban landscapes, including references to hiking and fishing.

“Fashion can be such a powerful vehicle for change and to talk about pressing issues, so with my own collection, I always try to have the aesthetic, yes, but also to have something a little bit more intelligent,” he says. Every collection Magugu creates is therefore named after a university subject that closely correlates to what he is feeling at that particular moment.

For Autumn/ Winter 2018, he introduced Home Economics, an exploration of the conditions in which women find themselves in today’s South Africa. For inspiration, he looked at thousands of references, imageries and old advertisements bearing clichés and stereotypical statements such like “women belong in the kitchen”; he used colours found “under the kitchen sink” to draw a striking collection in acid yellows, bright purples, pinks and blues.

With Art History (Autumn/ Winter 2019), Magugu explored how people turn to art to deal with their personal traumas and demons. Back when he was still a child, his mother used to tell him to record his nightmares into notebooks; years later, he found the journals again and had the thoughts printed on to duchess satin and pleated, creating modern and feminine garments, torn pieces of his story stitched to fine black mesh, beauty emerging from darker personal places.

Now, the collection that is presented at SA Fashion Week, called African Studies (Spring/ Summer 2019) “merges prints and motifs from my culture with tailored modern silhouettes”, says Magugu. It is this collection that got him into the LVMH Prize and one that is deeply rooted into his interest – and love – for our country. For his installation at Somerset House in London, Magugu had displayed his garments next to a painting-like image of three women – all sporting his designs – surrounding the Constitution, the document rolling out of the canvass and on to the floor, a powerful allegory of the High Court Judges Chambers. It is this incredible ability to combine South Africa’s complex past and rich heritage with a contemporary view on what it means to be a creative today and a global approach that makes him stand out.

“He understands history beyond kitsch and retro. He takes that and he gives it new elements of grandeur, and he gives it a new element of black beauty and black aesthetics without it being Ankara kind of print. For me, it’s an interesting take on where we are and where we need to be in terms of interpretation, what is African and what the world needs to absorb from us”, says stylist and creative consultant, Felipe Mazibuko.

Magugu recalls that while in London, he received the call about his selection in the LVMH Prize. “It was so incredible (…). I wasn’t going to enter because I suppose there were insecurities (…). I was in London at the time, when I was asked if I would be able to come to Paris at the end of the month.” The IFS programme was already a valuable springboard for Magugu’s career: “It was really getting the top people within their respective fields to give us insight into (the business of fashion) and teach us things around all that. We were assigned mentors who are also the best within their fields, to check up on us every few weeks which really helps because when you’re building a brand, you really do need people who have been there, who know what they are talking about to guide you especially those who have been doing (it already).”

But now, he had only a few days to organise his visa, create more looks (designers selected for the LVMH Prize had to present a collection to over 63 judges and fashion gatekeepers) and fly to Paris, France. Over 19,000 aspiring, emerging or established designers applied to the prize and Magugu is now one of the top eight finalists; the winner will be announced in September this year but he already feels the benefits of his participation. “It was (my) first time in Paris – I arrived there and the LVMH team was so incredible. I watched FTV (the fashion channel) religiously, I saw all the people in the front row, I knew all their names and Ugly Betty used to have them come as guests… And now to have been in the presence of some of them, and some of them I even speak to on WhatsApp now, I think that’s the most valuable thing.”

Shining a light on what it means to be an African designer, focusing on ready-to-wear and creating clothes that are deeply embedded into South Africa’s culture, Magugu is resolute about his future and what he wants to achieve. “In very basic terms, I really do want to make sure that I am happy in the life I’m living but I also want to make sure that if ever I do leave, God forbid, that I would have contributed something quite solid not only to the industry but the world in general. I just want to have made an impact and contributed to something bigger than myself.”

He has already started. ML