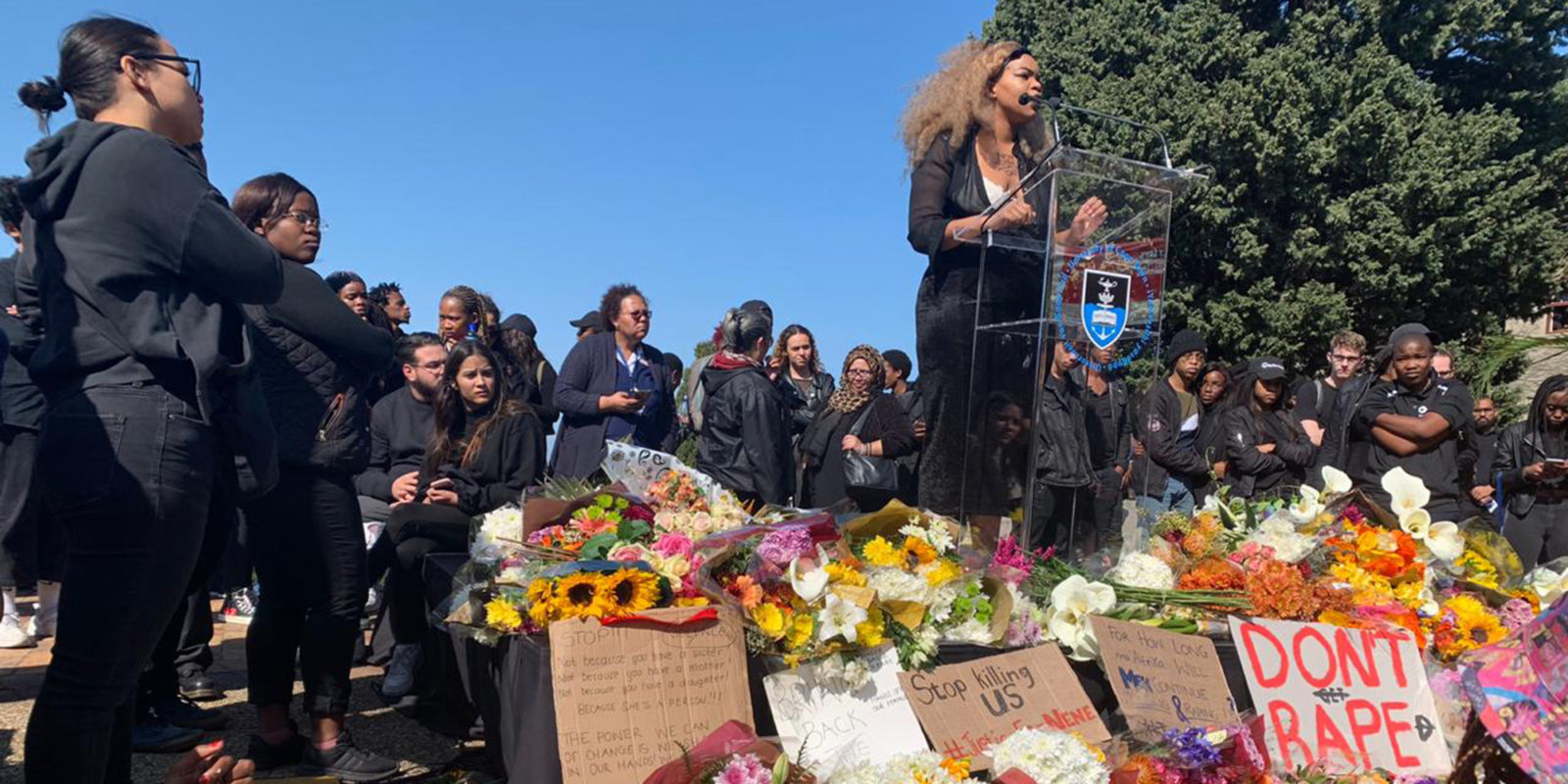 On Wednesday, 4 September 2019, University of Cape Town students held a protest outside Parliament and a memorial meeting on campus for a murdered student, Uyinene Mrwetyana.

Hundreds of people dressed in black joined UCT’s picket outside Parliament, days after a suspect appeared in court on Monday, 2 September, for the murder of first-year UCT student Uyinene Mrwetyana.

Students were joined by high school learners holding placards that read “Where can I be safe?”, “Men need to take a stand”, while singing “Yimbi lendawo, siyayisaba lendawo” (this place is awful, we’re scared of this place).

“[The mood on campus] has either been [one of] mourning or anger. It’s shifted a lot because everybody started off being shocked, being devastated and heartbroken and then we realised we actually should be angry,” said Jordon Ramlugan, a UCT engineering student.

When UCT vice-chancellor Mamokgethi Phakeng addressed the crowd, she said “it isn’t right that women have to think twice when they go into public spaces. In 1994 we thought we were going into freedom, but it seems we’re in bondage.”

In the middle of her speaking, students started yelling “we want action!”

When Asanda Lobelo, UCT SRC president, announced that Minister of Police, Bheki Cele, would address the crowd, those gathered started booing. Cele did not have the mic for long as the crowd moved between booing and chanting “we want action!”

Speaker of Parliament, Thandi Modise, came out to address the crowd.

“We want to take our lives back,” Modise said. “We will put pressure on every security sector to make sure you’re safe. Men, especially, the police, you need to be retrained so that you deal sensitively when women report,” said Modise.

At 12 noon, the students moved from Parliament to campus where the mood was sombre.

The stairs of Sarah Baartman Hall were filled with students and staff in black. A screen was put up bearing Mrwetyana’s face, and the stage was filled with flowers. Before the programme began people were singing hymns, while Mrwetyana’s family were in the front row seats.

“We’re gathered here to mourn and commemorate, because a beautiful young life was cut short. She was a student and a friend, her loss will be felt in the classroom, in her residence and her loss is felt in the country,” said deputy vice-chancellor Loretta Feris.

Mrwetyana’s friends described her as funny, beautiful and always willing to help her friends. A letter from her parents was read out and they expressed their “sincere gratitude for the outpouring of love from the university and the country”.

“The perpetrator took part of me, he took my child,” read the letter.

MPs like EFF spokesperson Mbuyiseni Dlozi, the chairperson of the portfolio committee on Women, Youth and People with Disabilities, Nonhlanhla Ncube-Ndaba and the deputy minister of Higher Education, Science and Technology, Buti Manamela were also present.

“She should be here with her friends, listening to lectures, spending long hours in the library and eventually clutching her gown as she leaves the halls to graduate,” said Manamela.

Outgoing chancellor of UCT Graça Machel took the stage and said she could sense there “was a lot of pain in the air”.

“Something is deeply wrong with our society. The problem isn’t the consequences, it’s the root, we need to ask ourselves how and why did we get here,” said Machel.

She urged the men present to respect women the same way they respect their mothers and sisters.

Machel reminded everyone that we all had the power to effect change in our communities and in the country.

“This is not the country we fought for. We have the power and the capacity to make a change. Remember that girl (Karabo) Mokoena? The nation was shaken like it’s shaking now – did it bring about any change?” asked Machel.

UCT has cancelled classes for the rest of the week, while the Minister of Women, Youth and People with Disabilities, Maite Nkoana-Mashabane, has announced 8 September 2019 as a national day of mourning “to reflect if this is the freedom we wanted.” DM