Can a centre-left populist alliance beat the far right in Italy? 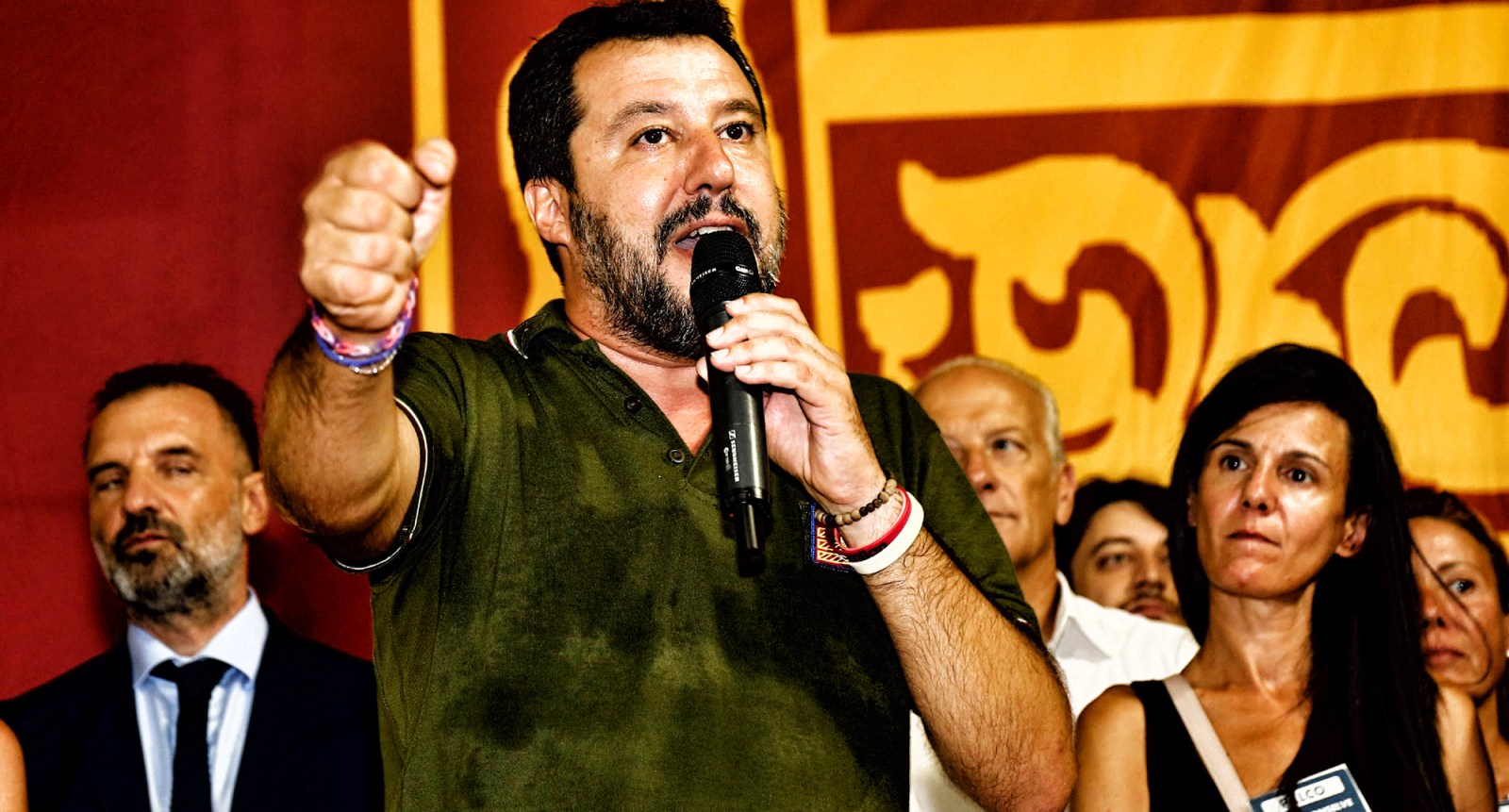 Former Italian Deputy Prime Minister, Interior Minister and Lega party's leader Matteo Salvini (2-L), speaks during the feast of his party in Conselve, Italy, 30 August 2019. Salvini and his party League pulled out from government and caused a political crisis a week ago. A new government is expected to be a coalition between the anti-establishment 5-Star Movement (M5S) and the centre-left Democratic Party (PD). EPA-EFE/NICOLA FOSSELLA

The Five Star Movement and the Democratic Party are putting up a challenge to Salvini’s League. But will it work?

Until a few weeks ago, Matteo Salvini, Italy’s interior minister and leader of the far-right League party, seemed invincible. With executive powers over immigration matters, and a massive social media following, he monopolised the national political debate for more than a year.

Since the coalition between the League and the “anti-establishment” Five Star Movement came to power in June 2018, Salvini’s focus has been almost exclusively on national security and a zero-tolerance approach to immigration, supported by a wholesale attack on NGO ships which rescue refugees in the Mediterranean.

Then the unthinkable happened. In early August, emboldened by the League’s gains in the European Parliament elections in May 2019 (it came out first in Italy with 34% of the votes), Salvini triggered a government crisis, pushing for a fresh general election, with the hope of winning a solid far-right majority and entering into a coalition with the smaller nationalist party Brothers of Italy.

This move, however, backfired. The “establishment” centre-left Democratic Party (PD) approached the Five Star Movement and started negotiations for a new government headed by current Prime Minister Giuseppe Conte. The small left formation Free and Equals also backed the initiative and other smaller parties might lend it parliamentary support.

The new coalition is not a done deal yet, as there is a chance that internal divisions in the Five Star Movement could derail the talks. But in the international arena, political leaders, media and markets have shown strong signs of approval, including an endorsement from US President Donald Trump on Twitter.

Building a front against the far-right

This emerging alliance is driven less by ideological compatibility than the need to avoid a new election. According to polls, a victory of a far-right coalition led by Salvini is a real possibility and the fear across the political spectrum is that a fully far-right government would threaten democratic institutions and human rights further.

The centre-left is also afraid that a Salvini-led cabinet could relegate them to opposition for many years to come, and further erode their relevance in national politics. For the Five Star Movement, such a development could threaten its very existence: it would be overshadowed by the League’s more militant populism and unable to deliver on its electoral promises.

To avoid this scenario the leadership of the “anti-establishment” political group has adopted a new strategy. In his recent blog posts, Beppe Grillo, the comedian who founded the movement, has recast Conte as the “new centrist” hope for Italy.

The prime minister, who was widely considered to be just a figurehead in the previous government de facto run by Salvini and Five Star Movement political head Luigi Di Maio, is now presented as a respectable moderate leader with international standing, who can steer Italy in these difficult times towards stability. His renewed political vision incorporates green policies, technological development and a redistributive agenda.

Can this strategy work and save Italy from a far-right government and prevent the collapse of the Five Star Movement?

Recent opinion polls show that Conte’s ratings have gone up, and so has Five Star’s vote share (after it slumped from 33% in the 2018 national elections to 17% in the recent European elections).

In a new alliance with the PD, the “anti-establishment” movement could consolidate itself as a governing party, perhaps with reduced electoral ambitions, as they are unlikely to regain the more militant protest votes they lost to the League.

However, it will have to address its internal contradictions and its incorporation of both far-right rhetoric and principles of humanitarianism, environmentalism and social justice. That process could see it lose even more votes to the ultra-nationalists.

The coalition itself could also face instability. The Five Star Movement takes political decisions via an online vote of its members. This is a very different model from the PD’s which still relies on traditional forms of internal representative democracy. There could be major conflicts between the two political formations, if the Five Star Movement decides to deploy e-voting and social media populist tactics to promote or undermine specific policies, rather than engage in conventional negotiations with the PD’s representative organs.

It does seem, however, that both parties have reached a consensus on extending some of Salvini’s closed borders policy. This is because by now it is clear that the vast majority of Italian voters are against migration.

This does not mean that the coalition will adopt Salvini’s hateful vitriol and extreme executive orders. It might allow a few NGO rescue ships to land in Italian ports and is likely to keep migrants’ and refugees’ arrivals down with less visible and aggressive methods and in coordination with the European Union.

Salvini’s decline and the return to consensus politics

The PD’s strategy to seek a government with the Five Star Movement mirrors centrist and leftist groups in the new European Parliament: curtailing the institutional power of populist and far-right parties by isolating some of them, and negotiating with others.

Identity and Democracy, Salvini and Le Pen’s European parliamentary group, has been cut off from the leadership of EU parliament committees, but at the cost of striking deals with the Five Star Movement, and the far-right Hungarian Prime Minister Viktor Orban and Poland’s ruling party Law and Justice, who all supported the election of new European Commission President Ursula von der Leyen.

Will this work in Italy? Getting Salvini out of the home affairs ministry would be a significant blow to his ambitions. Without executive power, his media visibility will be reduced, and that could lead to a loss of popular support.

Wielding less power, Salvini might also lose the support of some of the League’s regional leaders who run local governments in northern Italy, the country’s industrial hub. They need good relations with the EU, and northern businessmen, who constitute one of the League’s key constituencies, are heavily dependent on European markets.

Plans to change the current electoral system are also in the pipeline. The PD and the Five Star Movement are talking about the possibility of voting a new electoral law to bring back the full proportional representation (PR) system, abolished in 1993. With the current system (a mix of PR and first-past-the-post electoral systems), a winning coalition needs to break the 40% bar in the ballot box to gain a stable parliamentary majority. With full PR, Salvini would need a much bigger majority to form a government (above 50%), making it very difficult to exclude centrist forces.

Many dread this option as a return to the “corrupt” politics of the post-World War II era, when the same group of parties brokered short-term power deals that were largely independent of their ideological agendas. Yet, the far-right never entered a national government then, and Italy’s national and international outlook was far more progressive, even when more conservative leaders were at the helm.

These are different times, marked by rampant neoliberalism and national chauvinism. It is too early to say whether the ongoing coalition talks are the first signs of a post-populist consensus politics. But one thing is certain: populism or not, the current political consensus has shifted to the right. After all, a government-endorsed by Trump can’t really be a progressive one. DM

The views expressed in this article are the author’s own and do not necessarily reflect Al Jazeera’s editorial stance. Source: Al Jazeera