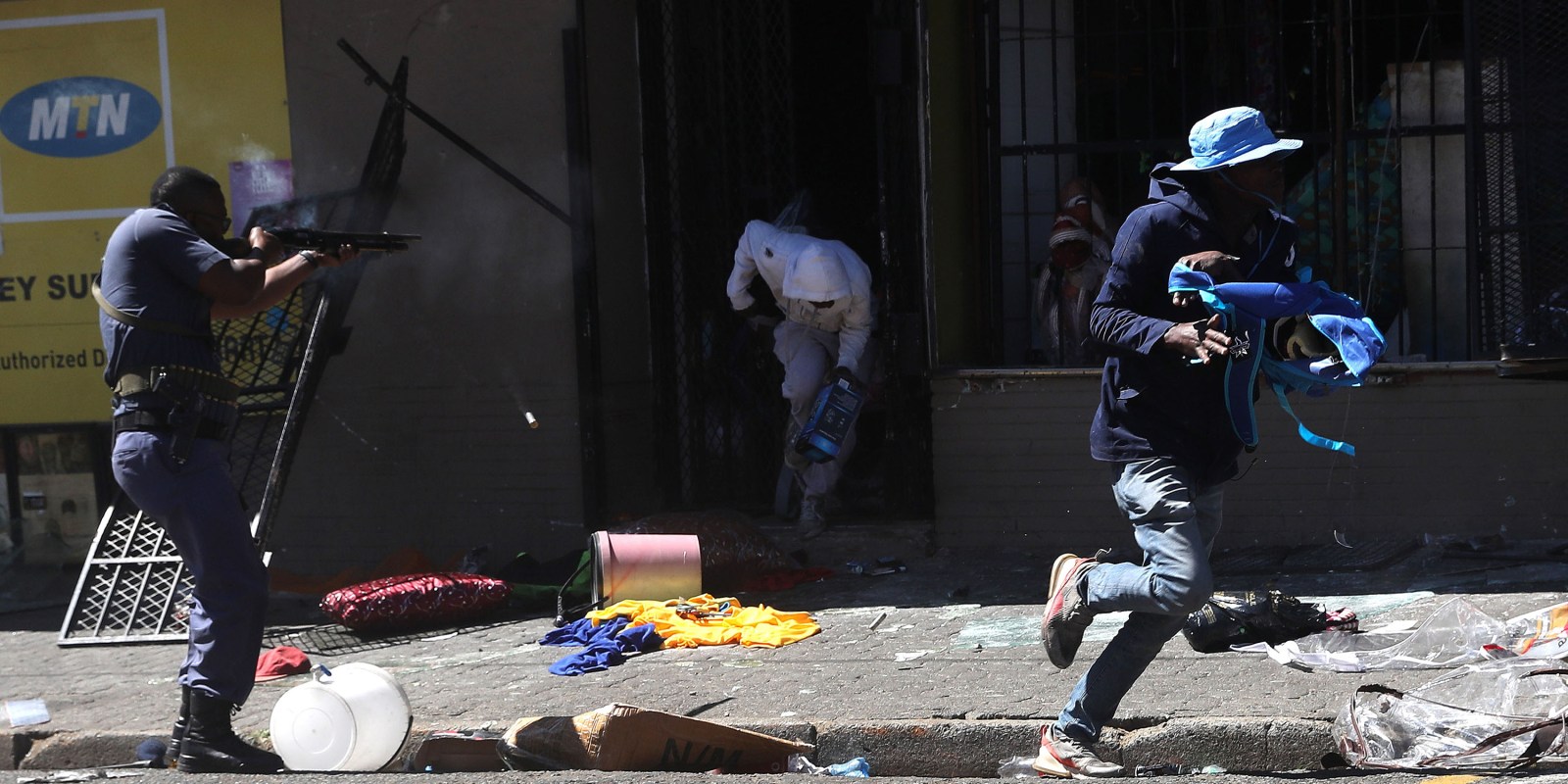 A police officer shoots at looters in Turffontein during violence directed at foreign nationals broke out in Johannesburg. Photo Thulani Mbele. 02/09/2019

There were 81 arrests in Johannesburg on Monday 2 September as reports were received of looting in eight parts of the city from east to west and also in Tembisa on the West Rand. The police minister blamed hostel residents from Denver and Cleveland.

Johannesburg was in lockdown and chaos on Monday 2 September as looting and arson expanded from the east of the city to the edge of the west as looters targeted areas rich in migrants.

Police Minister Bheki Cele attributed the attacks to “nothing but criminality” and said most of the looters came from the Denver and Cleveland hostels which are near the east of Johannesburg. But, this report by Daily Maverick shows that foreigners were targeted.

The violence began on Sunday night when arsonists and looters targeted Jeppestown on the eastern flanks of Johannesburg. Many migrants from Nigeria and the Democratic Republic of Congo (DRC) have set up businesses in the area, including car repair workshops, tailors and other stores.

Early on Monday, the looting had spread to Malvern where a 28-year-old car sales shop belonging to a South African family was gutted. A family member told Eyewitness News that her father, the owner, was stuck in the car showroom where the family lost millions of rand as their stock burned. Looters tried to steal the cars and then burned them when they couldn’t.

A witness described the scenes as a “war zone”. By midday, looting had erupted in Turffontein in the south of the city, an area with a large Nigerian community. From there, it spread south, where the Bree Street taxi rank became a no-go zone for police and first responders.

By early afternoon, looters had attempted to target a Somali-owned shopping centre and a Shoprite store in Mayfair, but were rebuffed by traders. Mayfair is the hub of the Somali community into the rest of South Africa and its leaders call this area in Johannesburg home.

They have their own security who helped repel the alleged would-be looters, who arrived by taxi. The taxis were stoned and the occupants sped off after an attempted attack. The area is home to more than 20 migrant groups from Somalia, Bangladesh, Pakistan, Malawi, Ethiopian and other countries, and is regarded as one of the most cosmopolitan in the country.

Streets were strewn with glass and bricks and all local businesses, including banks, fast food stores, and butchers shut up shop as news spread from the rest of the city that looters were advancing.

Tembisa in the East Rand also experienced looting and after dusk fell Hillbrow was a no-go zone as looting and violence intensified. Hillbrow is another hub of many different migrant communities.

Police  Minister Bheki Cele called the looting a national emergency. By the end of the day, 81 looters had been arrested in Jeppestown, Malvern and the CBD, said metropolitan police department spokesperson Wayne Minnaar.

“Right now, the city is calm and hundreds of additional police have been deployed into the hot spots,” he told Daily Maverick. DM