Women farmworkers demand an end to use of harmful pesticides 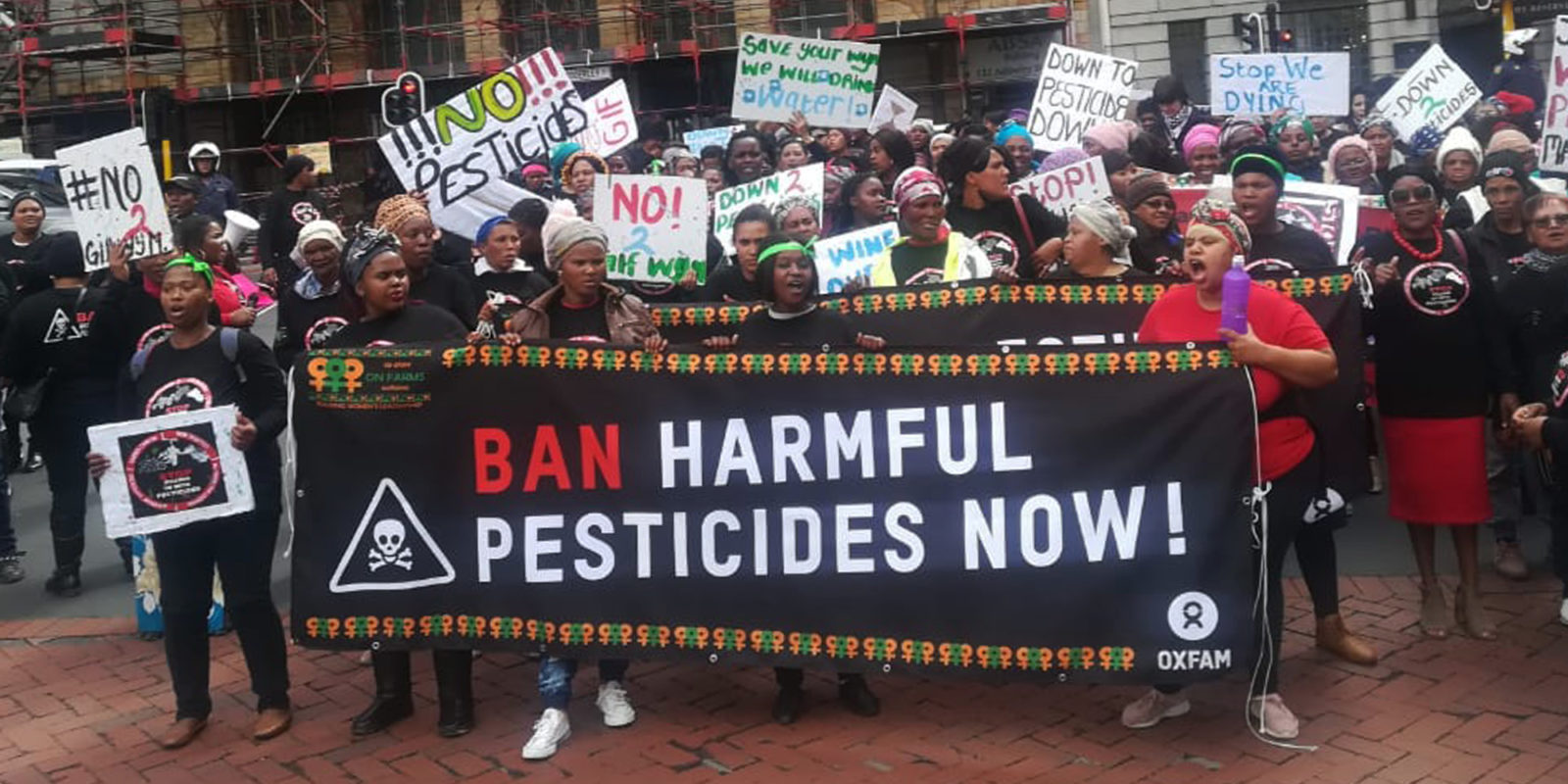 Around 200 farmworkers and dwellers marched to Parliament on 28 August 2019, calling for the banning of pesticides commonly used in the fruit and wine sector. (Photo: Noah Tobias)

Farmworkers claim breathing problems, infections and damage to their hands are all caused by pesticides. With fruit picking season approaching, Women on Farms Project led a march to Parliament calling on government to ban the use of harmful pesticides.

Farmworkers from across the Western Cape gathered in Cape Town on Wednesday 28 August calling for an end to the use of some pesticides which they say are damaging their health.

“I ask all women to wear protective clothing,” said Magrieta Prins, a farmworker from De Doorns. She was at Community House in Woodstock, where she and fellow farmworkers and dwellers gathered before marching to Parliament to ask the government to ban pesticides outlawed by the European Union (EU), but claimed to still be in use on farms across South Africa.

Prins was a domestic worker in Cape Town in the 1980s. When she married, she moved to De Doorns where she became a farmworker.

But over time she developed respiratory problems as she inhaled pesticides on the farm she worked on. “Later my hands were swollen, burst open… and the breathing…” she said. Eventually, she could no longer work because of her respiratory issues. Listening farmworkers applauded in agreement with her.

Roseline Engelbrecht, labour co-ordinator with the Women on Farms Project, a nonprofit organisation working with farming communities, told the crowd that on the farms the organisation monitored for pesticide use in 2017, 73% of farmworkers “go into the vineyard immediately after they [the farmers] spray pesticides”.

Engelbrecht said there were no warnings issued when pesticides were sprayed, putting workers and farm dwellers at risk of inhaling the harmful substances.

“The animals were drinking, and they died. If they had that effect on animals, what about humans?” she asked.

Farmworker Elsa Lambrecht, also from De Doorns, said on the farm where she worked, there were no toilet facilities so they had to use the vineyards to relieve themselves: “You sit down, meanwhile there’s pesticides and they start itching” she said.

Lambrecht went to a doctor after such an incident, where she was told her she had picked up an infection. When she went to her boss, he allegedly told her, “you drank on the weekend, you did what you wanted to do, now you want to ask me?” and made her return to work.

David Esau, Provincial Chief Inspector for the Department of Labour was in attendance on Wednesday morning, at a packed Community House, listened to the farmworkers and dwellers. When he finally took the stage, he agreed that some of the findings by Women on Farms were right.

“They (farmers) should not have gotten audit certificates because they exposed their workers to these pesticides. Clearly there’s a problem in the market when it comes to the implementation of these things,” he said.

Esau went on to state the areas his inspection teams would go in the first weeks of September — Bredasdorp and Hermanus. The crowd shouted that he should visit de Doorns instead. When Esau asked “so let me make it clear, there are no farmworkers in Bredasdorp?” which caused the women to shout even louder at him.

From Community House, the group was transported to the Cape Town CBD where they held a march to Parliament. Marching through the CBD, the women held up posters with slogans such as “your wine = my pain” and “your wine makes me sick”.

At Parliament, Louisa Warries, from a vegetable farm in Kraaifontein, said she works with manure. “Our hands and clothes smell like compost,” she said in front of ministry officials, farmworkers and dwellers. “When I get home, I still smell like manure. I have to pick up my one-year-old child.”

Warries continued: “And pesticides… when the farmer sprays, one metre away from me, he tells me to come back. Help us please, we have no protection,” she said.

Women on Farms Project invited Oxfam to the march after Oxfam Germany collected 29,302 signatures calling for the banning of 67 pesticides commonly used in agriculture. Women on Farms Project says 20 of these pesticides are specifically used in the fruit and wine sectors. The signatures were collected from Germans who bought wine and table grapes produced in South Africa.

In a memorandum handed over to both Minister of Employment and Labour Thulas Nxesi and Minister of Agriculture, Land Reform and Rural Development Thoko Didiza, Women on Farms Project said:

“In 2017, WFP commissioned research into the labour conditions of women farmworkers, during which 343 women farmworkers were interviewed in the Western Cape and Northern Cape. The research found that 73% of women seasonal workers interviewed did not receive protective clothes from the farmer, while 69% came into contact with pesticides within an hour of pesticides being sprayed.”

Women on Farms Project demanded some of the following from the department:

Women on Farms Project gave the department until 30 September to respond to their demands. Nxesi was not there to receive the memorandum, but Mawele Ntamo, Western Cape chief director of Employment and Labour accepted the memorandum instead.

“We want to ensure that before the sun sets today, the minister will have received it,” said Ntamo, who undertook to send the memorandum to the Minister of Agriculture as well. DM