Thuli Madonsela re-emerges as a catalytic converter for social justice 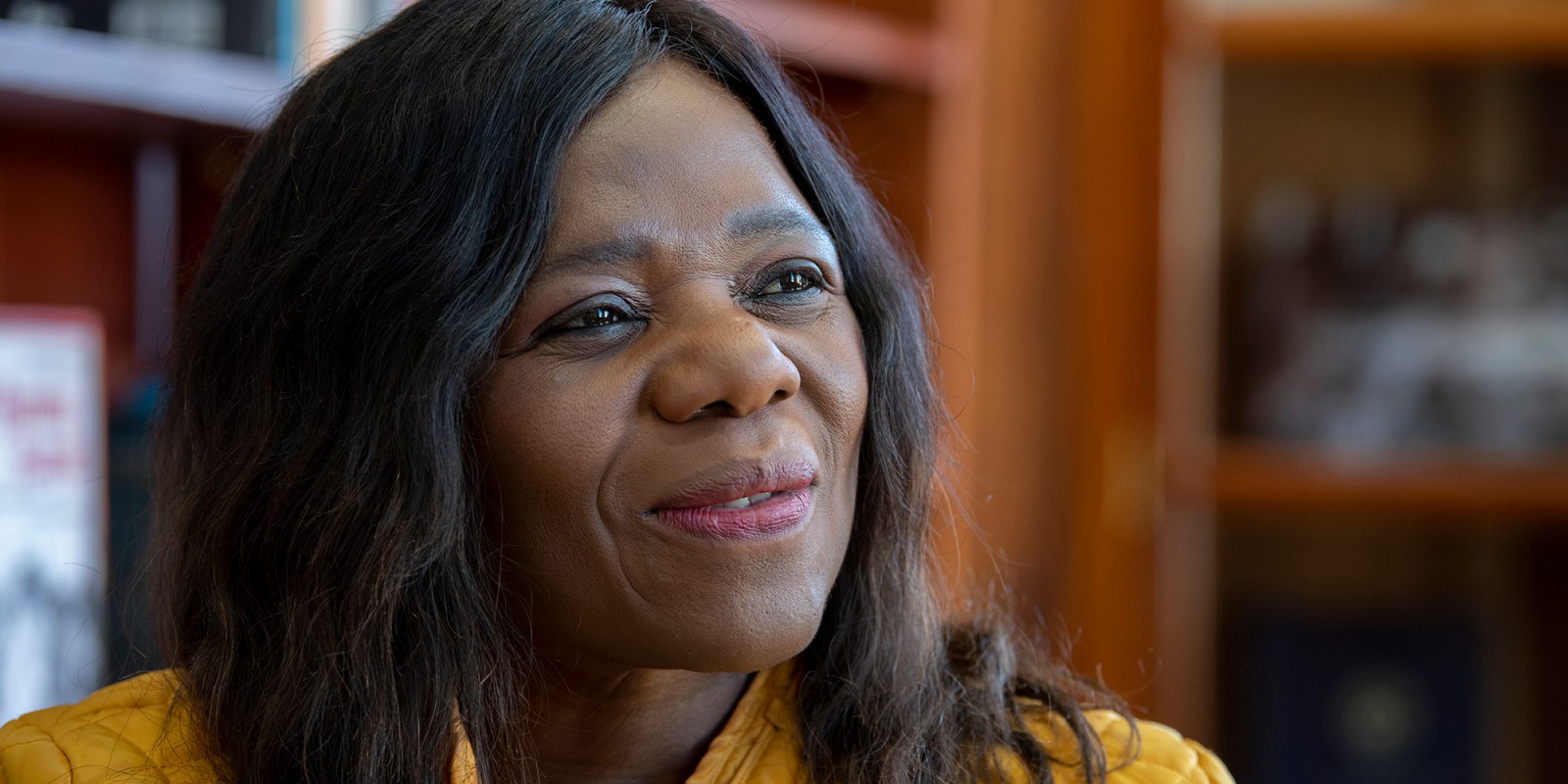 Former public protector advocate Thuli Madonsela during an interview outside the University of Stellenbosch’s old main building on June 20, 2019 in Stellenbosch, South Africa. Madonsela, who has been on the news about her public pronouncements on the work of her predecessor Busisiwe Mkhwebane, opened up about her role as head of social justice at the law faculty of Stellenbosch. University. (Photo by Gallo Images/Netwerk24/Jaco Marais)

Thuli Madonsela tells inaugural conference: “Every generation has its great challenge. Ours is climate change and social justice. The two must be addressed together. We must treat them both as an emergency.”

In October it will be two years since Thuli Madonsela retired as Public Protector. She is a unique person. But one rare quality is the manner in which she stepped quietly away from a high intensity and high profile position, not seeking to hold on to past glory, and immediately started reinventing herself.

Yesterday, the new Professor Madonsela, now the Law Trust Chair of Social Justice at the University of Stellenbosch, emerged from her chrysalis. Her purpose, to launch an ‘M-Plan for social justice’ at an inaugural Social Justice Summit and International Conference.

The conference took place on a wine farm outside Stellenbosch (more of that later) and Madonsela had obviously cashed in on a great deal of her social capital to attract many leaders from our society; from academia, business, the media, a former President, former politicians and senior public servants. The room was a veritable brains-trust and I wondered, if this group can’t fix South African society who can?

Madonsela’s M-plan is a multipronged strategy (“not a one-size-fits-all because people don’t come in one size,” she says) that aims to place social justice and equality at the centre of fixing SA’s multiple concurrent crises. It takes as its inspiration the Marshall Plan that served to reconstruct Europe after the Second World War. But this time, M is for (Palesa) Mosa, a woman who was arrested as a youth in 1976 and has lived through all our tumultuous times. In Madonsela’s words:

“I wanted to give (South Africa’s M-Plan) the face of someone who reminds us where we came from, where we are and where we still need to be.”

Madonsela’s M-Plan aims to mobilise evidence and data, boost civil society and mobilise resources behind a shared quest for social justice. She already has notched up a win by drawing academia into the social justice arena and persuading them of the need to mobilise research and evidence in the quest for ideas and alternatives. Wim De Villers, Vice-Chancellor of Stellenbosch University, opened the conference pledging the full support of the institution – one hopes that’s more than a promise. In addition, speakers included the likes of Adam Habib and Jonathan Jansen.

An academic conference on social justice is a South African first, if not a world first, and on days 2 and 3 delegates will hear research papers linked to social justice presented by academics.

President Ramaphosa’s away in Japan, so Minister in the Presidency Jackson Mthembu spoke on his behalf. Mthembu’s first words were to pledge to work together with all involved in the M-plan: “we are a government not afraid of new ideas.” Mthembu’s speech contained a lot of now predictable platitudes we have come to expect from government Ministers. But there was a slightly new edge and urgency to it too, particularly its criticism of people with privilege who obstruct social justice. As a case in point, he made passing reference to fight-back against the National Health Insurance Bill.

Interestingly though Mthembu also criticised social justice organisations for being “uni-directional in persistently pressing claims against the government.” He called “for a social compact on social justice” – one wonders what that might look like, but if the Presidency is serious it might be a good idea.

Unfortunately, Mthembu and his entourage didn’t stick around to listen to the sessions that followed because that was where something unusual – even hopeful – started to emerge.

The first thing that was unusual was a level of urgency, even desperation, about the precarious, explosive inequalities in our country; people are panicking about the deadly impasse in addressing social injustice. Anxiety was particularly evident in a plenary with the unusual mix of Pali Lehohla, Jonathan Jansen, FW de Klerk, Ben Turok, Busisiwe Mavuso and Nicky Newton-King.

That was when the frank-talk started. Lehohla, for example, vented about the exclusion of reference to poverty or inequality in the economic policy just sprung on us by Finance Minister Tito Mboweni (a plan that Helen Zille, by contrast, warmly approved).

Ever the statistics-czar, Lehohla pointed out that unemployment and poor education contribute to 66% of poverty. Following him, Jansen (as we would expect) lamented the state of education saying he thought it was wrong for government officials to send their children to private schools. “How do you sleep at night,” he asked?

All talked of a dangerous stalemate and agreed our country is teetering on the brink of an implosion. But what pricked my ears was to hear Newton-King question the capitalist system that she, as CEO of the Johannesburg Stock Exchange, sits at the pinnacle of. At one point, I thought I even heard her say that “we have to question whether capitalism is the right model to deliver social justice at the moment.” Newton-King wasn’t advocating for socialism but she did propose that business needed a “social license to operate”.

She was echoed by Mavuso, the CEO of Business Leadership South Africa (BLSA), who warned of imminent collapse, castigated the Public Protector Busisiwe Mkhwebane in even stronger language than South African Communist Party leader, Solly Mapaila, and called for policy certainty to get business to end its (de facto) investment strike. But Mavuso is also critical of business burning its own house. Which caused Ben Turok to sit-up and describe Mavuso as a “representative of business who’s turning me on”, an unfortunate slip of the tongue he admitted, before making the serious point that listening to the two business leaders made him think “it is possible to come to a strong consensus.”

And thus the talks rolled on through the day leading to the adoption of a Declaration in the evening.

Overall the Summit filled me with a sense of hope. If we can just escape our own inability to implement our game-changing ideas, then we are a country filled with ideas, bright people, skills and resources. But here’s the rub. Civil society is good at talking. Less so at changing, and in this regard let me offer a few frank but constructive criticisms. There are too many of these Summits.

In June last year, I saw many of the same social justice celebrities at a conference hosted by former President Kgalema Motlanthe in the Drakensberg. It’s a rule that they take place in inappropriately plush venues, away from the stink of the sans culottes. Their results don’t match the unjustifiably large carbon footprint of those who attend them; people who would, in the same breath, describe themselves as climate crisis activists.

We too exhibit behaviours that need to change. When will social justice conferences take place in the midst of the poverty and inequality we crow about? When will big-money conference budgets be seen as an opportunity to shift some income into the marginalised communities we claim to speak for?

My take-away from the Stellenbosch Summit was that people in South Africa are desperate for reason to hope; they have ideas and energy.

The M-Plan, which at this point is thin on detail, could be a very good idea, particularly if it feeds into a meaningful social compact on social justice mentioned by Mthembu.

South Africa defied the odds once before. Now it’s make-our-mind-up time again. It is entirely possible to pull back from the brink a second time. Madonsela is a rare asset with trust and respect that carries into diverse and antagonistic communities. Having spiked state capture, Madonsela can help us recapture trust and the hope of a just future. If she’s serious about the M-Plan she has another big responsibility on her hands. DM