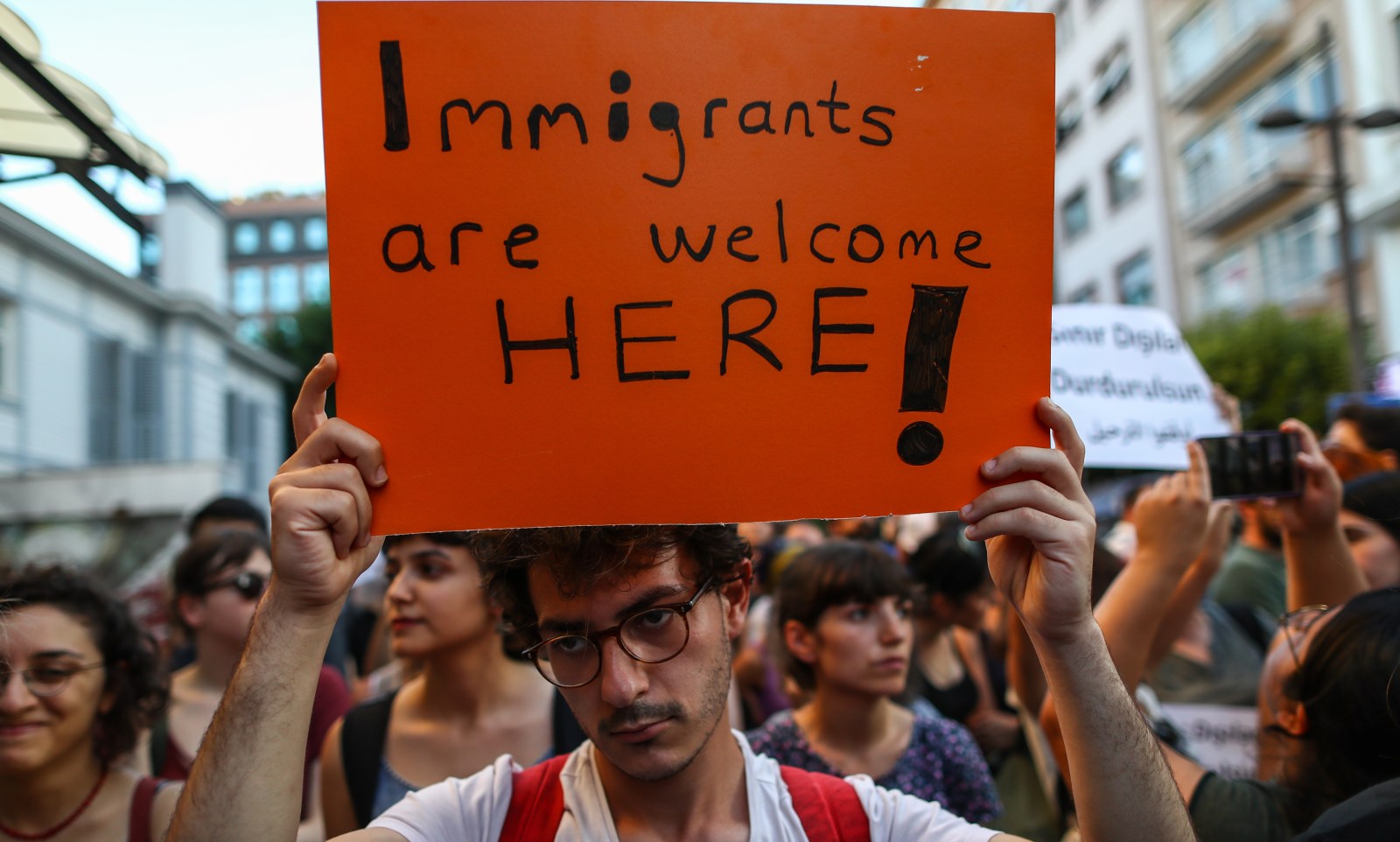 Members of some Turkish NGOs gather to protest against the Turkish government's recent refugee action, during a demonstration in Istanbul, Turkey, 02 August 2019. Reports state that Turkey's Interior Ministry has launched a crackdown on unregistered refugees in Istanbul, with more than 6,000 arrested over the past two weeks, according to reports. The United Nations Refugee Agency (UNHCR) says that there are over 3.5 million Syrian refugees in Turkey. EPA-EFE/SEDAT SUNA

Now is the time for real dialogue between the EU and the continent on security and migration.

Far fewer Europeans than before regard migration as among the most pressing priorities faced by the European Union (EU). This is despite Africa – and specifically countering migration from Africa to Europe – having become a key focus of the EU’s foreign policy over recent years.

The change in public attitudes creates an opportunity for the EU’s new leadership to review its approach towards migration, forge a more collaborative partnership with the African Union (AU) and member states, and ensure that the bloc’s approach to migration doesn’t undermine its morality and soft power.

The EU’s focus on migration stems mostly from its migrant influx over the past five years, when more than two million migrants and asylum seekers were apprehended by EU or member state border authorities. Most – 80% – arrived between 2014 and 2016 via Turkey. Migration moved from a peripheral policy concern to one which 58% of Europeans in a 2015 poll rated as the most important issue facing the region.

Despite recent declines in apprehensions of irregular migrants and asylum seekers, populist political parties throughout the EU continue to fan citizens’ concerns on migration and use them for political gain. Under pressure from these parties the EU adopted a series of policies meant to stem irregular migration. Arrivals from Turkey were largely curtailed through a controversial deal between the EU and Turkey in 2016.

Following this, the EU focused on addressing irregular migration from and through Africa. This included missions and aid to halt migrant embarkations on boats from North Africa, mainly Libya, stymie transit through the Sahara, and dissuade departures from migrants’ countries of origin. Several European countries also pursued a policy of returning apprehended migrants – voluntarily or not – home.

Some of these policies – notably efforts to halt embarkations from Libya – have achieved some of their goals. And the number of migrants apprehended in the central and western Mediterranean has dropped since 2016.

But the fundamental factor driving migration from African states to the EU is that there are better economic opportunities for African youth in Europe than at home. This could be exacerbated in the coming years by a range of factors, from the economic impact of climate change to the projected decline in working-age populations in many European states. So this drop in irregular migration from Africa to the EU could be a temporary trend. But it does give policymakers breathing space.

As arrival numbers have fallen, the issue has slowly ebbed in popular concern. Only 34% of Europeans in one recent poll ranked migration as among the EU’s most important policy issues, though it continues to outrank issues such as climate change and terrorism.

Changing public attitudes coupled with the arrival of a new EU leadership team should prompt new thinking about the bloc’s relationship with Africa and its approach to migration. This rethink must focus both on the EU’s foreign policy and on morality.

The partnership between the EU and the AU has centred on developing and implementing programmes designed to stymie the movement of irregular migrants to the EU. Development aid, such as the EU Trust Fund for Africa, is conditioned on countries’ willingness to cooperate on control efforts.

Talks on the issue have been ongoing for years. However these have rarely succeeded in advancing collaborative solutions, and have instead resulted in often prescriptive approaches reflecting European goals. Such approaches squander the opportunity to build a collaborative consensus between the two continents on the issue.

An open, collaborative, and consensus-focused dialogue between the EU and member states and the AU and its states is necessary to forge migration policies that work for both continents. Any new strategy should be equitable for the social and political needs and economic demands of states in both Europe and Africa.

A rethought and collaborative migration strategy should also focus on morality. It is here that the EU’s approach over the past five years has been most deficient. The EU’s strength is its soft power, rooted in its moral authority as a polity that doesn’t mirror the foreign policy approaches of other global powers such as the United States, Russia or China.

It is a strength rooted in the bloc’s claims that “Europe cannot stand by while lives are being lost” and “should continue to be a safe haven for those fleeing persecution”.

However its approach on irregular migration from Africa belies this. Programmes to counter migration through Libya have resulted in migrants being detained in overcrowded, unsafe detention centres, menaced with “torture, rape, malnutrition and the spread of diseases”. One recent airstrike on a detention facility killed 40 migrants.

In the Mediterranean, European NGOs have been actively discouraged from carrying out rescue missions or blocked from disembarking those they’ve rescued. Aimed at deterrence, these policies have magnified the danger faced by irregular migrants and undermined European claims to moral authority.

The newly elected and re-elected EU Parliament and leadership must decide on their approach for the next five years. The bloc should create opportunities for genuine policy collaboration with the AU and its member states, one rooted in consensus and reflecting the concerns of both sides.

A new strategy should also be rooted in morality, via short-term policies that limit the risk to migrants through sea rescues and better asylum practices, and long-term solutions including ending EU deterrence policies and enhancing opportunities for regular and routine legal migration and travel between the continents.

Reframing the EU’s migration strategy to be more moral is not just necessary from a soft-power perspective – it will also allow for a better and more durable relationship to be built with the AU and member states. DM