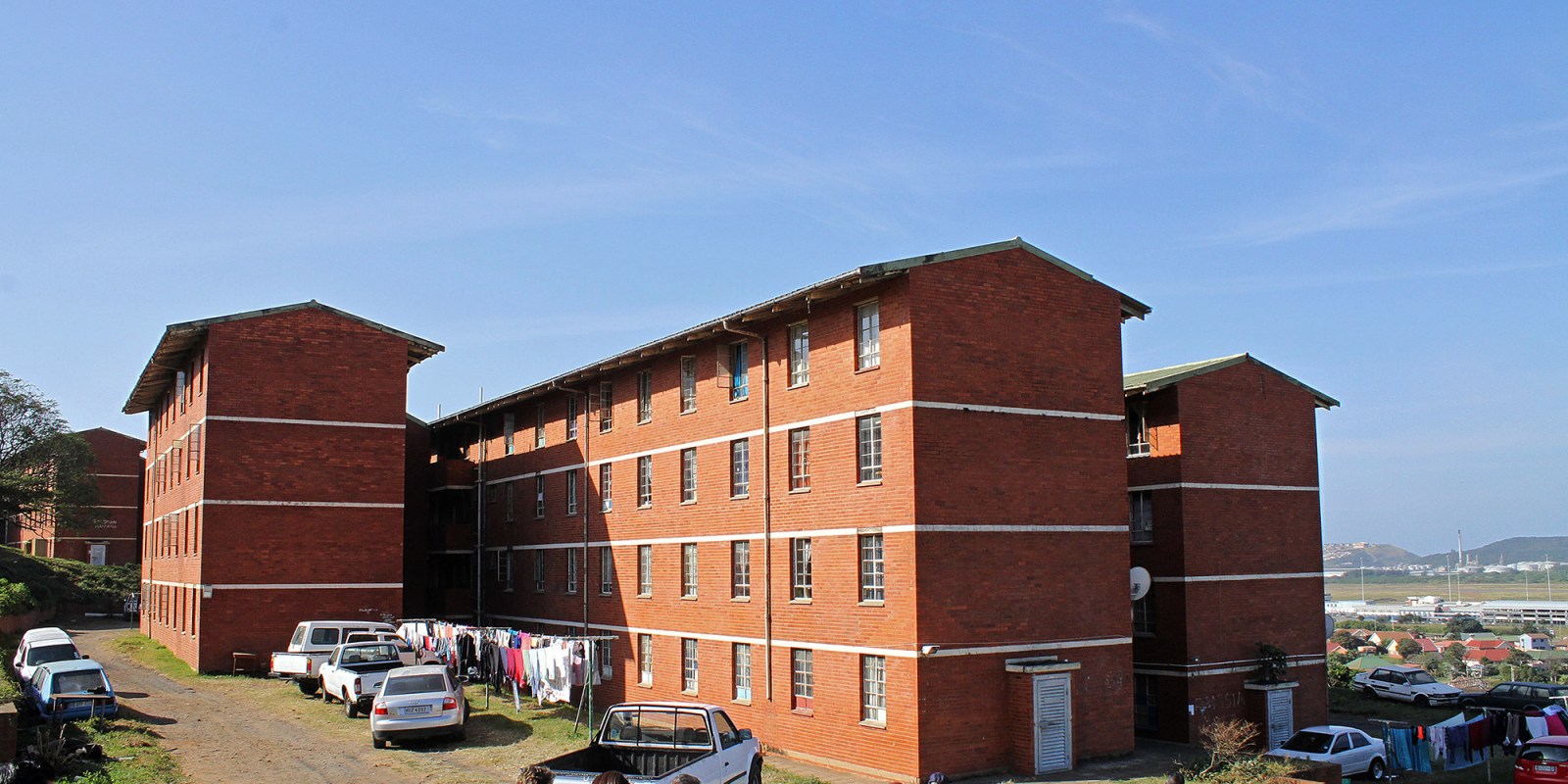 On Friday 23 August 2019 two residents of Glebelands Hostel Block 54 were shot. One died at the scene, the other was taken to hospital with gunshot wounds. According to community sources, both men had refused to contribute when money was recently extorted from residents of Block 54. (Photo: Gallo Images / City Press / Siyanda Mayeza)

On 19 August 2019 we alerted the provincial Organised Crime Unit to the latest ‘collections’ and requested increased security at the hostel and court in the run-up to and duration of the ‘Glebelands Eight’ trial. Nothing was done, and now a young man is dead and another critically wounded.

It has been proven time and again that whenever money is extorted from poor hostel dwellers, death will surely follow. The community knows this, the authorities know this, and anyone who has been following the Glebelands Hostel saga in Durban knows this.

But, time and again, the police have failed to act on warnings and information provided to them to prevent loss of life. Now a young man is dead and another critically injured only days after the hostel’s notorious collections commenced ahead of the “Glebelands Eight” trial, which begins on Monday 26 August.

Between 6pm and 7pm on Friday 23 August, two residents of Block 54 were shot on Wanda Cele Road just below the footpath that leads between blocks 55 and 56. One died at the scene, the other was taken to hospital with gunshot wounds. They had reportedly been returning to Glebelands after drawing money at Mega City Mall. It is unknown if they were robbed after being shot.

According to community sources, both men had refused to contribute when money was recently extorted from residents of Block 54.

On 19 August we alerted the provincial Organised Crime Unit to the latest collections and requested increased security at the hostel and court in the run-up to and duration of the “Glebelands Eight” trial (see letter below: “URGENT: Security threat at Glebelands”).

The ringleaders allegedly behind the latest extortion and intimidation of residents were identified to the police and their full names and addresses provided. It is not the first time these same individuals, who are understood to be closely linked to the accused, have orchestrated “collections” and violence at Glebelands.

One is believed to be out on bail for two murders that took place in the KZN Midlands earlier this year. The second is allegedly related to one of the accused in the Glebelands Eight matter. The third is understood to be the girlfriend of the Midlands murder accused and allegedly implicated in several other hostel murders herself.

Because we understand the difficulty in convincing witnesses to come forward, we requested the police at least warn the alleged suspects and increase hostel security. But it seems nothing was done, credible information was ignored and the community’s efforts to “work with the police” undermined.

According to some of the victims, a new modus operandi is being used to collect money to prevent the organisers from being directly implicated. A certain resident at the targetted blocks receives a letter pushed under their door instructing them to collect money (in this instance R80) from all residents by a specific date. They are told that once they have collected the money someone whom they do not know will fetch the funds from them.

It has been alleged that people from the surrounding informal settlements or even further afield are being used for this purpose. Failure to cough up, as seen with depressing regularity and yet again on Friday evening, proves fatal.

While this new modus operandi complicates things for the police, a simple sting operation would soon lead investigators back to the instigators, as would good intelligence work. But clearly, hostel dwellers’ lives remain low on the list of police priorities.

Residents have reported that no additional patrols have been deployed and no “stop and search” or other operations have been undertaken to recover illicit firearms or pre-empt the tragedy that has been brewing since the collections began on 15 August. Only the occasional Umlazi SAPS van has been seen performing standard patrol duties.

It is equally disturbing that the municipality has failed to repair street lights, leaving several roads in Glebelands dark at night for weeks. It is a no-brainer that darkness increases the danger to residents and allows criminal activity to proliferate.

Money collected in this way has been used to buy guns, hire hitmen, kill witnesses and bribe police and magistrates. Why do the police consistently fail to act immediately when collections are reported to them to prevent and pre-empt these acts of violence? Once again, a life has been lost while another man lies critically injured in hospital and the collections continue.

Once again, shame on the state. DM

Re: URGENT: Security threat at Glebelands

Kindly be advised of the following:

1. On 15 August we heard rumours that collections had begun at Glebelands old blocks. This was since confirmed and further collections were held on 17 August.

2. The blocks where money has already been collected are Blocks 45, 50, 53 and 55. An attempt was made to collect from residents at Block 57 but they refused and chased away the organisers.

3. The amount being demanded is R80 per person. This is too much for people who have nothing and WILL lead to conflict.

4. The organisers of the collections are reportedly:

5. These collections may be for transport to attend court for the “Glebelands Eight” trial which starts on Monday 26 August. Or towards lawyers’ fees. Or it may be for other reasons such as assassinating witnesses. What we do know as fact is that each time there are collections at Glebelands someone is killed. Especially those who refuse or simply cannot afford to give money. Or witnesses are killed.

6. A number of the witnesses are still living at Glebelands so their lives are in additional danger. Any event that could lead to the destabilisation of the hostel could have a negative impact on the case.

7. The organisers of the collections should be charged with extortion, but we understand the difficulty with witnesses.

8. There have been rumours that hitmen from Harding have been brought to Glebelands last week but this could not be confirmed. This is in addition to the wanted suspect known as ________ that I alerted you about recently.

9. As a matter of urgency please kindly ensure that:

9.1. Security is immediately increased at Glebelands, especially patrols and stop and searches at the old blocks where the collections are in progress, at blocks where witnesses are resident, and known hot spots such as the taverns, taxi ranks and entrances;

9.2. The rooms of the alleged organisers are searched and if they cannot be charged, at least ensure that they are given warnings about further disruptions;

9.3. Additional security is provided to all SAPS members, particularly police witnesses, the IOs and prosecutor involved in the case.

9.4. Extra security is provided at court, including the parking areas for the duration of the trial.

I would also like to thank all concerned for their hard work and efforts in bringing the Glebelands Eight case to trial as well as for bringing “normality” (such as it is) back to Glebelands. It is thanks to your team that violent incidents have been reduced at the hostel by almost 60% since the arrests of Mdweshu and many of his crew. Kindly pass on my thanks to the rest of the team whose email addresses I do not have.

Good luck to all for the trial!

Vanessa Burger is an independent community activist for human rights and social justice.