These Are the Things that Sit with Us: Voices from Bonteheuwel, Langa and Worcester 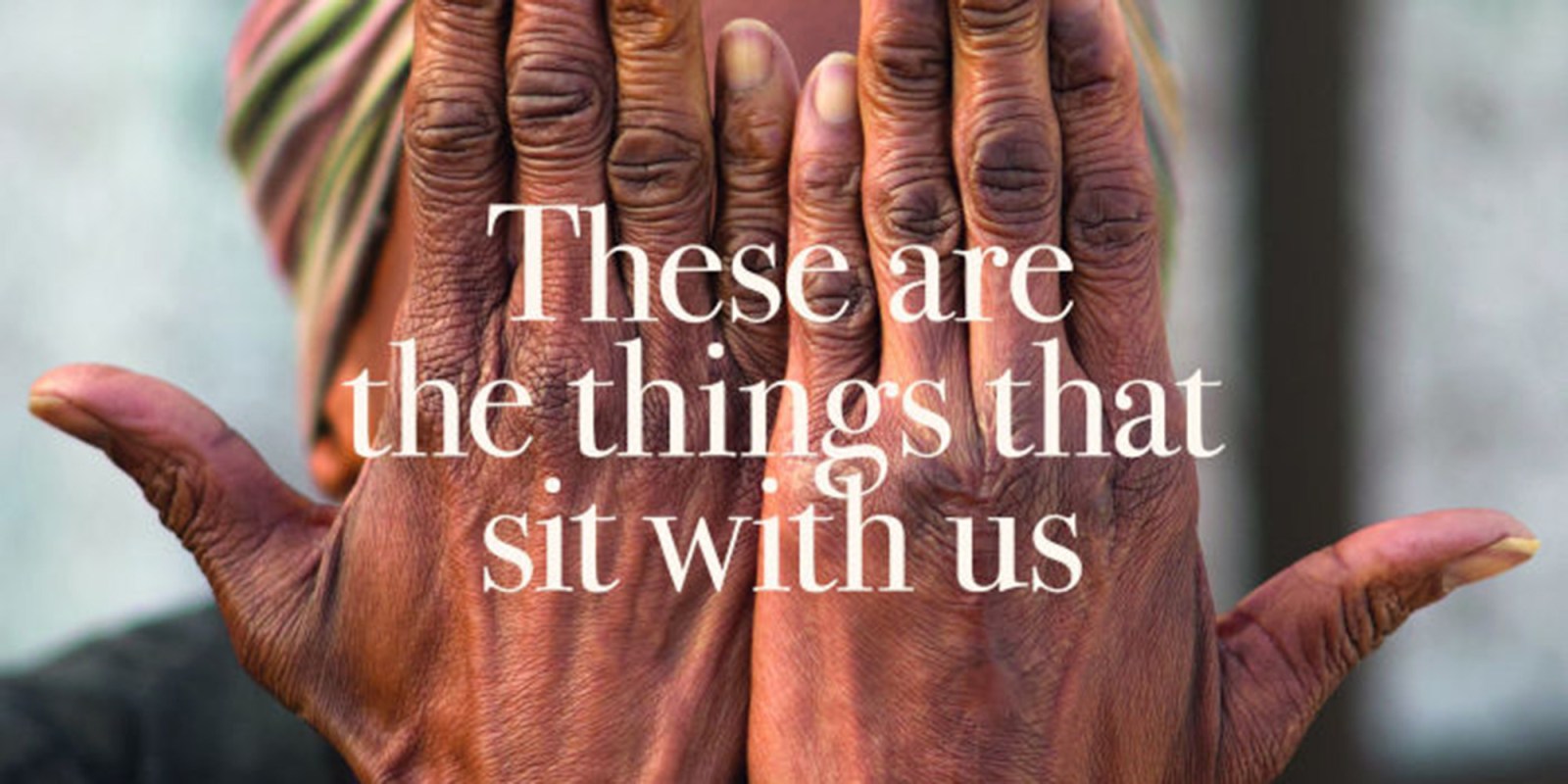 ‘These Are the Things that Sit with Us’ records more than 60 stories that were documented in Bonteheuwel, Langa and Worcester as part of the ‘Trauma, Memory, and Representations of the Past’ research project that examined, through interviews, the immediate and intergenerational repercussions of historical trauma and traumatic memory in the context of post-apartheid South Africa.

As editors, Pumla Gobodo-Madikizela (Stellenbosch University), Friederike Bubenzer (Institute for Justice and Reconciliation) and Marietjie Oelofsen (Stellenbosch University) write in the introduction, “Twenty years after the TRC, this book is testament to the fact that justice and reconciliation is not merely an event or a legal process but an on-going journey that requires people to talk publicly about the effects of colonialism and apartheid, and the need to listen to one another’s stories.

“It gives publicity to undocumented, everyday experiences that shaped the lives of ordinary South Africans during this country’s brutal and painful past. It is a record of ‘the things that sit with us’. As such, this book is an effort to map a picture of the wider, and difficult, conversation about the meaning of transformation. We hope that by sharing their memories in this book, the storytellers will contribute towards a deeper understanding of the suffering that underpins this country and shapes our contemporary dispensation.”

These are three of those stories:

That ball should not have rolled there
By Abeda Stofberg

I was born in Brian Street, in Cape Town, in District Six in 1946. In 1957 my mother and father received a letter that said we had to move out. Either we move our own stuff or they will remove it for us with the big council trucks. We moved to Bonteheuwel when I was 11.

I remember one day, when we were already staying in Bonteheuwel, my father took us to the beach. We had to take the train from Langa and then to town. My two sisters and I wore shorts, sweaters and sun hats. My mum and dad were also carrying things. I had a beach ball in my hand that was blown up already. The train was divided into Non-Whites, and Whites Only sections. As I got up to get out of the train, the ball fell out of my hand and rolled under the seat of a chair in the Whites Only carriage. The police were watching us. My daddy could see that one of them was getting his baton ready. I wanted to run and fetch the ball but my daddy stopped me. He knew they would hit me.

You know how they beat up my daddy? That ball should not have rolled there. That’s a coloured ball; what was it doing there? He beat up my father so badly. We cried. My father was taken to Caledon Square police station at the Parade. He was full of blood. And while he was being beaten up he had to see us crying too. My mother was crying. My sisters were crying. And I was crying because I felt I was at fault. I should not have let the ball go. But I didn’t know the ball would hop and roll underneath that bench.

I felt strange that I hadn’t gotten the hiding. I thought they beat up the wrong person. My mother almost fainted. We didn’t bother to go to the beach as planned. We turned around and we went home.

In that moment I hated South Africa
By Fatima Dike

My name is Fatima Dike and I am a playwright. My career started at the Space Theatre [1] in Long Street, Cape Town. I was the first black person in that theatre. My parents came from Somerset East in the Eastern Cape. They lived in District Six at first. My mum got a job as a domestic worker for Mr Rogers who was the superintendent of Langa. Mr Rogers found them a two-roomed house in Church Street. My father also got employed as a “wardsman”. All the white families that ran the township of Langa for the City of Cape Town lived in nice houses on the main road in Langa, then called Washington Street.

In 1979 I was invited to the University of Iowa to participate in their international writing programme. America sells itself internationally as a country of freedom for all, where everyone can achieve their dreams. As Africans we always dreamed of going to America. I believed that all my dreams would come true because America was rich – living there was a dream come true. I was a foreigner looking for a piece of the American pie. Then in my third year of living there, reality hit me. I saw people living on the streets, women using their children to beg for money on the subways.

One day in New York, I decided to go and eat at a restaurant by myself. Friends had recommended a restaurant on Fifth Street. I was standing on the opposite pavement looking at the place when a thought came to me out of the blue: “What will you do if when you go inside, someone tells you that they do not serve blacks?” I was shocked. I had not had this thought in three years. I said, “If someone tells me they do not serve blacks I will kill them!” I walked into the restaurant, sat down and waited for the insult to come, but it never came. Instead, a young white man, my son’s age, came over to my table, greeted me with respect, gave me a menu and a glass of water and told me to take my time. I sat there completely dumbfounded. Where did that thought come from? I had imported apartheid in my head to America. This fear, this self-degradation was the monkey on my shoulder. On that day I hated South Africa so much that I swore I would never go back to an apartheid country.

A father that drinks, is something else
By Maria Julius

I came here to Bonteheuwel when I was seven years old. My father was a soldier. He was a prisoner of war in Germany after the Second World War. We weren’t very rich. We were 11 children but some of them died and there are only seven of us left. I am 56 now.

We used coal stoves then. All the houses in Bonteheuwel had coal stoves – those with the coal chimneys, those types of houses. We had to gather wood because we didn’t have money to buy wood and such things because the old man didn’t earn much. He received an army pension. And my mother suffered from a bad heart. My father was a strange man because he came from the war and wasn’t a very normal father. We weren’t allowed to talk loudly, and we had to go to bed early and that type of thing. And we couldn’t play music at home. I had to go to my friends to listen to music. His one leg was amputated. And he always told us stories about his prisoner of war days. Sometimes he would stop because it was too traumatising for him. He said that in Tobruk [2] they shot people and hung the children from the windows and so on. He couldn’t get over that, so then he drank. And a father that drinks is something else.

My mother had a bad heart and she was very soft. She allowed him to treat us like that because she couldn’t stop him. You couldn’t open your mouth, we were scared of him, to tell you the truth. We did love him, but I was fearful of him. At Christmas, when it was time for carols, then we marched around the table singing, all of us.

And then I met my husband when I was 22 and I reckoned I had to get out of the house. DM

[1] The Space Theatre was a fringe theatre in Cape Town that was founded in 1972. The theatre was established as a defiantly non-racial venue in a racially divided country. In order for the theatre to perform to mixed-race audiences, which was prohibited at the time, it used the guise of being a ‘club’ where people could sign up and become members, thereby making it legal. It closed in 1979 due to financial pressures.

[2] On 20 June 1942, German forces attacked Tobruk – an Allied stronghold in Libya where the 2nd South African Infantry Division was based. More than 10,000 of the 33,000 Allied soldiers that were captured, and held as prisoners of war in harsh conditions, were South African soldiers.