Former finance minister Trevor Manuel has spoken out against aspects of the enforcement of the lockdown regulations. (Photo: Gallo Images / Netwerk24 / Felix Dlangamandla)

For the first time, Old Mutual board chair Trevor Manuel has spoken publicly about the dust-up between the insurer and axed CEO Peter Moyo, who was sacked again on 21 August.

Old Mutual chairman Trevor Manuel has broken his silence about the insurer’s protracted impasse with axed CEO Peter Moyo, saying the insurer’s 14-member board remains united about how it has handled the boardroom stand-off.

In another twist to Moyo’s public fight to be reinstated as Old Mutual CEO, the insurer issued him with a further notice terminating his employment contract. In other words, Moyo has been fired for the second time from South Africa’s second-largest insurer.

Moyo was initially suspended on 23 May due to a “material breakdown in the relationship of trust and confidence”. He was fired on 18 June for allegedly pocketing dividend payments worth R30-million linked to an investment holding firm he co-founded called NMT Capital – in which Old Mutual has a 20% stake.

However, Moyo believes Manuel was “gunning for him” for accusing the former finance minister of being deeply conflicted when he oversaw the managed separation of Old Mutual’s South African business from its UK operations.

Moyo said Manuel had a “triple conflict of interest” as he was chair of Old Mutual Group SA, Old Mutual plc and Rothschild (a corporate advisory firm) when the insurer was in the throes of its separation from 2015 to 2018.

Manuel said the board has taken the view that it should dispel the notion of “two bulls in a kraal”, which he believes is “essentially the Moyo narrative”.

“The way to do it is to demonstrate board unity at every point,” he said in a text message. Manuel said he would engage fully on the matter at a later stage.

Old Mutual has fired Moyo again at a time when both parties await a decision by the Johannesburg High Court – due next week – about whether he can resume his duties as CEO.

Old Mutual has appealed against a high court judgment delivered by Judge Brian Mashile, which reinstated Moyo as CEO and blocked the insurer from appointing his successor. The insurer wants a declaratory order from Mashile about whether its appeal against his judgment at the Supreme Court of Appeal means Moyo cannot get his job back until the appeal process is concluded.

Business Maverick is in possession of Old Mutual’s letter to Moyo informing him about the termination of his employment contract. In the letter, dated 21 August and written by Old Mutual company secretary Elsabe Kirsten, the insurer said irrespective of what might happen in pending court proceedings, the employment relationship between both parties is “wholly untenable”. 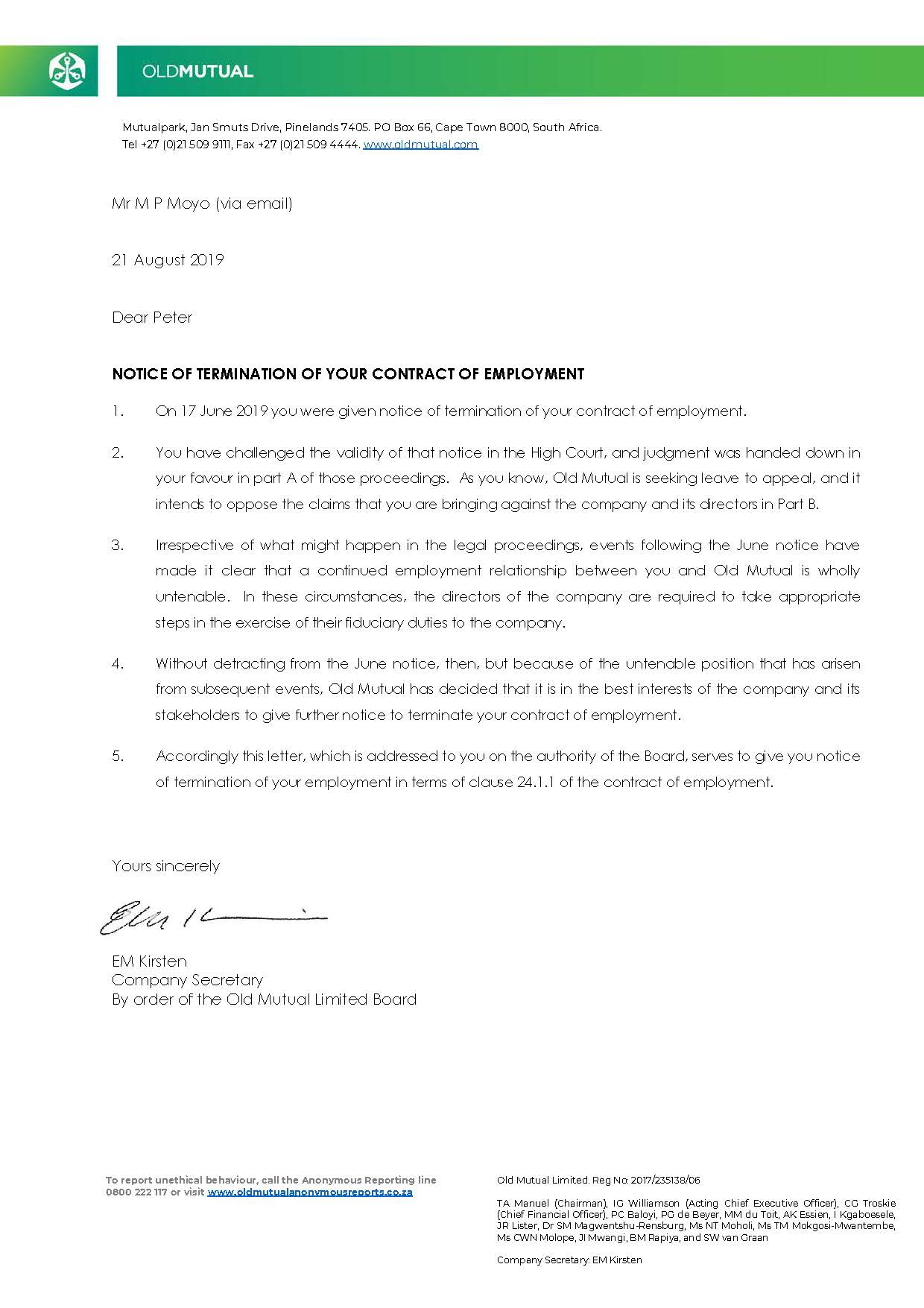 “In these circumstances, the directors of the company are required to take appropriate steps in the exercise of their fiduciary duties to the company,” the letter reads.

It continues: “…Because of the untenable position that has arisen from subsequent events (court applications launched by Moyo), Old Mutual has decided that it is in the best interests of the company and its stakeholders to give further notice to terminate your contract of employment.”

Old Mutual fired Moyo in terms of clause 24.1.1 of his employment contract – the same clause that Mashile said Old Mutual breached when it fired him on 18 June without affording him a disciplinary hearing over the alleged conflict of interest.

Old Mutual’s decision to fire Moyo comes days after the insurer’s second-largest institutional shareholder, Allan Gray, met with the board to raise its concerns about the impasse. Read more here. Shareholder value has been eroded as Old Mutual’s share price has fallen about 15% to R18.30 a share (close on 22 August) since Moyo was suspended on 23 May – wiping off R16.4-billion.

Whatever the outcome of the court processes, FNB Wealth and Investments’ Wayne McCurrie said Old Mutual’s reputation has taken a hit due to the fight with Moyo.

“This whole episode reflects poorly on Old Mutual. But this is not the end of the world. I doubt whether this will dramatically affect the valuation of Old Mutual in the short or long term.” BM