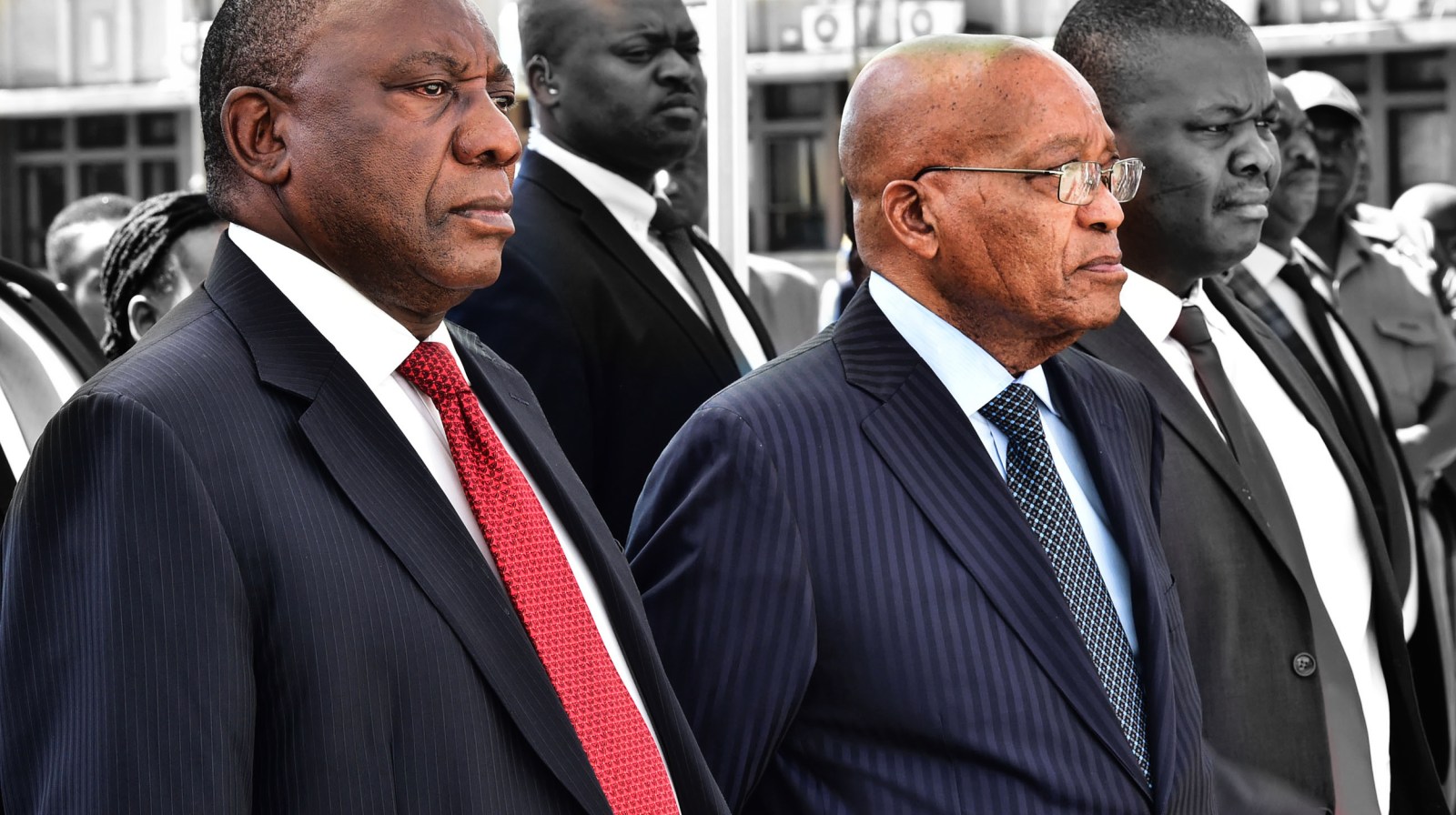 President Jacob Zuma and Deputy President Cyril Ramaphosa at the signing of the pledge at the Constitution Square during the commemoration of the 20th Unniverasy of the constitution of the Republic of South Africa in Sharpville, Gauteng. 10/12/2016 Kopano Tlape GCIS

The Ramaphosa era is still in its infancy and it is typically stuttering and sometimes quite badly. So far, the silver-tongued Cyril Ramaphosa behaves as though the public does not deserve to know how he came to power. In a one-party dominant system like ours, the ANC's internal elections are as important as the real thing.

Jacob Zuma did not comprehend the concept of accountability and when he reached the Union Buildings, he quickly became contemptuous of the public. Error after error, he simply did not understand why people raised questions about his deeds. And his party was very forgiving in his first few years in power. He could do wrong, but nobody could touch him. He could spray his seed around, and if anyone dared ask, his battery of state aides, and throngs of supporters simply yelled “counter revolutionary” and all would sink back into their shells.

If that did not protect him, Number One himself would simply gird up his loins and ask: ukhuluma nami? (are you talking to me), as he asked Floyd Shivambu at an ANC youth league conference in 2011. That’s how he silenced critics, and the myth of an invincible man grew.

Before people could realise, he had become the Teflon Don who could get even the most sensible people to sing from the Nkandla national anthem as is they are somewhat hypnotised. How do you explain how Ramaphosa walked into the Number 2 Position in 2012, and went on to praise Zuma as a great leader who would leave a great legacy? Alongside, Ramaphosa, then finance minister Pravin Gordhan was one of those who were brought into the ANC NEC to lend it credibility, and help mitigate the impression that Zuma was an incorrigible mad man.

The Ramaphosa era is still in its infancy and it is typically stuttering and sometimes quite badly.

It is a product of the ANC’s dysfunctional election system, where people pretend that only their opponents are the bad ones. This presidency has allowed itself to be distracted by the “CR17 leaks”, without much effort to counter the public narrative, because, I guess, the President does not owe the public an explanation about this huge amount behind the money.

Because Zuma the phenomenon has been built up as the single biggest threat to our collective future, many are prepared to gloss over the funding issue, because, it is argued, the whole thing is part of the “fight back campaign”.

On Thursday Ramaphosa did his typical best with his quicksilver tongue in Parliament, pushing questions on this matter back rather effortlessly. He will get away with this because the intellectual class long decided that Zuma is the bad guy, and all else must be relegated to the back files in the warehouse.

Ramaphosa asked, rather rhetorically, if Parliament needed to involve itself in a debate about the funding of intra-party contests. Of course no self-interested politician will support that. Turkey, Christmas? And the aftermath of the debate has been dominated by the PR machinery driving the narrative that private funding of the CR17 campaign is just that. Here is the thing: they are right, for now.

However, there will come a time when the real owners of the Ramaphosa Presidency stand up. The kind of donors revealed so far have a very little stake in the matter and the man himself. However, an impression is being created that his is a “Bidvest Presidency” or Ramaphosa is beholden to his funders. That itself is a narrative with lots of legs or currency if you are into conspiracies.

But the simple fact that R1-billion could not buy the ANC from Zuma’s grip tells you a lot. It took the opportunism of one David Mabuza, with the help of Paul Mashatile, one of the masterminds of the Nasrec moment, to push Ramaphosa over the line. Right now the two are watching the “CR17 funding scandal” with smug faces as it suits them for now. It weakens Ramaphosa considerably, and therefore draws him closer and away from the rich and the famous at Bidvest and Investec. If he is able to read the tea leaves properly, Ramaphosa will now have to create some distance between himself and the business class, and spend more time with the factions that brought him to power. Failing which, the impression stays that he is a pawn of the super rich members of white society. And considering that he is not the kind of man who can gird his loins, and ask ukhuluma nami baba? (are you talking to me, man?), his sense of vulnerability will grow. And business may not always be loyal to him.

With our ubiquitous economic problems, it may soon dawn on the rich 1% that their R1-billion won’t yield much return. Sinking with a dithering President was surely not the reason behind spending R1-billion – the equivalent of a spanking new soccer stadium – or yet another white elephant. The man dubbed “The Buffalo” has a lot of goodwill behind him still. If he did not use this opportunity to reform the ANC electoral system, what stops our “good Samaritans” from spending a “Mabuza22” campaign?

So far, Ramaphosa behaves as though the public does not deserve to know how he came to power. In a one-party dominant system like ours, the ANC’s elections are as important as the real thing. If it matters how parties are funded in competitive elections, it absolutely matters too in an uncompetitive environment how “nasrec-like” events are financed. Pushing the matter to Parliament, where good ideas and people go to die, does not help South Africa or Ramaphosa.

This is yet another opportunity for him to make a defining contribution to the evolution of our politics. He may not do this, as his power is derived from Mabuza and Mashatile. Big business was merely the blesser in this environment. By not following the money, we are complicit in creating a deeper problem in the not-so-distant future. It is like removing the incentive or stimulus for Ramaphosa to drive the political reform agenda. DM