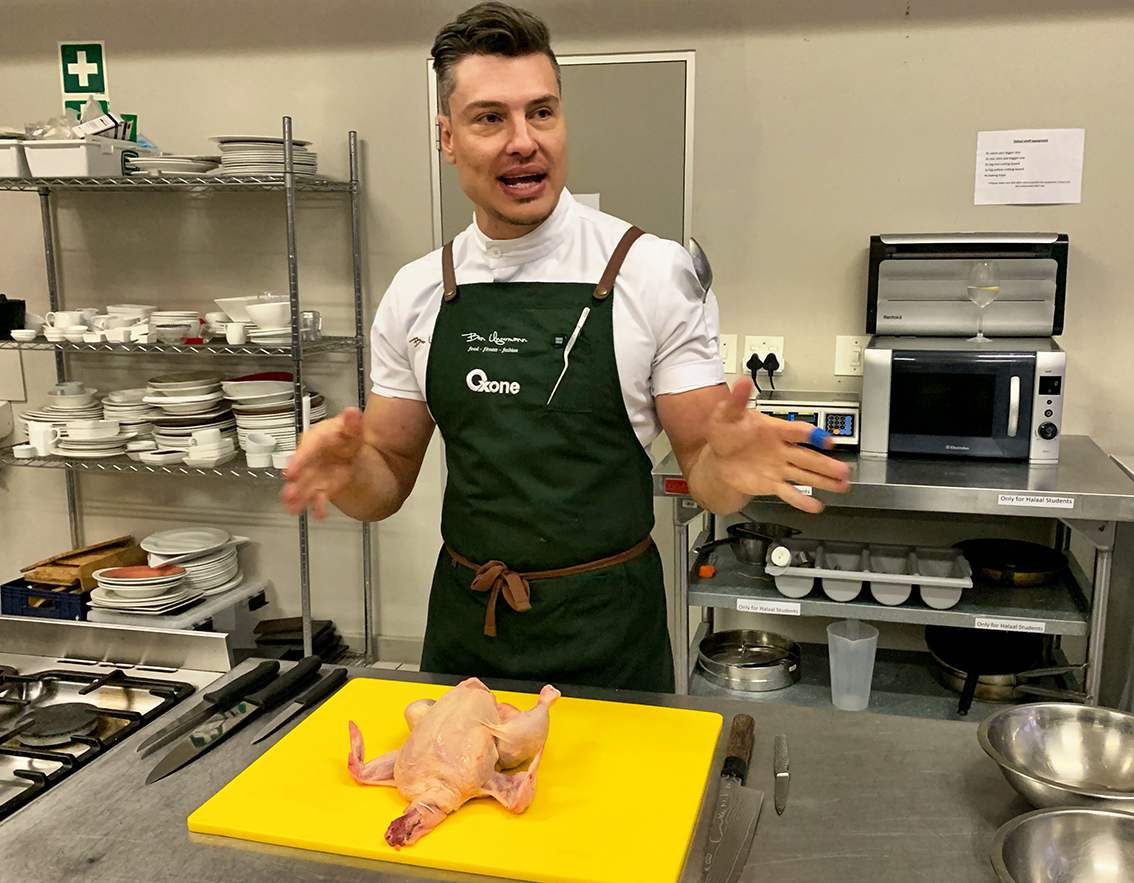 Dutch-Indonesian in heritage, Australian by nationality, the ever-smiling dude who nearly won MasterChef Australia’s ninth season is planning to move to the Mother City in 2020. Not least, he says, our produce is way better than Australia’s. Who knew?

South Africans emigrating to Australia are commonplace but it’s not every day you meet an Australian who is planning to make SA – specifically Cape Town – his permanent home in 2020. The man who is doing this is Ben Ungermann, runner-up in season nine of MasterChef Australia.

Ben has visited South Africa several times; the first time he didn’t make it to Cape Town and probably still hasn’t heard the end of that oversight, even though it has since been rectified.

“Cape Town is a gem. I can’t stop speaking volumes about Cape Town,” he enthuses.

“The first time I came to SA I didn’t visit Cape Town and everyone was carrying on about it. Then I came and I literally fell in love straight away, flying in over the mountains, then the beaches. The first time was ‘wow!’ and it’s still wow.”

Although he’s intent on relocating to Cape Town – he hopes Sea Point – Ben says his favourite SA city is Durban.

“I love Durban. It has such a vibe for me because it’s so much like home in Brisbane – very chilled and a bit slower, not like Johannesburg.”

Naturally, Ben has sampled the Durban delight that is the bunny chow.

“I can do hot food. I lived in Indonesia,” he says. His heritage is Dutch-Indonesian. Given this immigrant/emigrant anomaly, we have to know why.

“Honestly, it is the people,” answers Ben. “That is the thing that stands out the most. I’m two and a half years out of my season now, almost three, and people still recognise me when I walk around South Africa. I love it. They are my most dedicated fans. They invite me to their houses – ‘please, I want to cook for you’, ‘can you try these different dishes?’. The South African people, for me, are the most enthusiastic and kind; I absolutely love them.”

Apart from that, says Ben, our produce is “unreal, better than Australia”.

Seriously? We’ve all watched MasterChef and seen those glorious pantries with shelves filled with enticing fresh ingredients. Is that reality TV show not a true reflection of every Aussie supermarket experience?

“What you find is that on set… they can make anything look good. Every apple has been polished,” reveals Ben. Whaaaat…

On the subject of produce, I tell him about waterblommetjies, which he’s never heard of. I send him a recipe for bredie, and he follows me back on Instagram (bit of a thrill, I cannot lie). It’s through Instagram that Ben is most active online. He promises to respond to messages (it might take a while but it will happen), and it’s there in his bio that you’ll find the links to his appearances on this current tour.

A natural and easy teacher, approachable and chilled (his word), on this visit Ben is hosting masterclasses on deboning chicken, and another focusing on desserts. He claims to be quite shy, but he feels like he’s in his element when he’s teaching.

“I find it’s a comfortable space for me. I don’t say much, I’m more of a listener. But when the floor is mine and I have something I want to give to other people, and I know what I’m talking about, I sort of lighten up a bit and shine a bit more,” he says.

Ben genuinely cares about passing on information he has learnt.

“I think chefs these days have it pretty tough,” he comments. “Yes, they are rock stars and it’s a very cool thing to do, but at the same time, with things like social media and the internet, they are so open to criticism.

“You can not have a clue about food and still say your piece so I think it’s a double-edged sword. It can be quite detrimental to aspiring chefs. So that’s why I want to make sure people get the right information.

“We all need to eat, so why not enjoy the process, why not make it an experience rather than just sustenance?”

This is why Ben will, wherever possible, choose to do his classes at a cooking or culinary academy. It was at Capsicum Culinary Studio where I met him, and attended his chicken class, during which he showed us how to debone a leg/thigh, the breast, and turn a wing into a lollipop. His most fervent messages included “don’t waste anything, and never season your protein before cooking as it will draw out all the moisture”.

Following the class, we all sat down to a four-course dinner prepared by the students according to Ben’s recipes, which he keeps pretty close to his chest… for now. Apparently everything necessary for a book is waiting in the wings.

First course was silky-smooth chicken liver parfait with apple compote and bread. Next up was a deconstructed Caesar salad using the lollipops. The chicken breasts, which Ben had told us how to cook for maximum tenderness, were served with black garlic purée and asparagus.

The dessert, however, was the highlight. More savoury than sweet, the recipe is a tribute to his Ouma, and the dish Ben cooked in the MasterChef final. It’s a pumpkin patty with Dutch spices, cream cheese mousse, and vanilla bay leaf ice cream which Ben served as quenelles at the table for each guest.

Ice cream, of course, is what Ben is famous for; since MasterChef, he has opened an ice cream shop in Ipswich (the one in Queensland, Australia). He says he’s never had a flavour that didn’t work. Lots of trial and error to achieve perfection, yes, but ultimately no failures, and nothing is off limits. And it’s always 100% natural, something Ben insists upon.

“In terms of out-of-the-box flavours, last time I was here I made a salted caramel biltong ice cream and it was bloody amazing,” he says. Of course! The good old salty-and-sweet mouth explosion combo. What about pineapple on pizza? “Oh yes. It’s not for everyone but it’s a thing in Oz,” he says. There you have it.

While Ben is in South Africa now, he hinted that he is taking some production meetings. “I will definitely be involved in the entertainment industry in South Africa in 2020…that’s all I can say,” he smiles. DM