In 2015, a multibillion-rand contract from the Passenger Rail Agency of South Africa for much-needed new rolling stock was derailed amid the infamous tall trains scandal. Scorpio can now reveal that the Jacob Zuma Foundation is among a slew of third parties that benefited from the almost R800-million in alleged loot emanating from the ill-fated contract.

The first signs of possible large-scale corruption emerged soon after the deal was closed, when businesspeople with links to then-president Jacob Zuma were identified as recipients of some of the deal’s proceeds.

The payment to the Jacob G. Zuma Foundation from front company Swifambo Rail Leasing during the rollout of the Passenger Rail Agency of South Africa’s (Prasa) R3.5-billion locomotives contract adds fresh impetus to allegations that the deal was accompanied by large-scale corruption involving South Africa’s most senior government leaders.

Swifambo effected the transaction only a week after it secured a R182-million payment from Prasa, its penultimate payday in a series of payments from the state-owned rail operator.

The now-liquidated company and its sister entity, Swifambo Holdings, received R2.6-billion from Prasa between April 2013 and July 2015.

The deal fell apart amid revelations that the Afro4000 locomotives Swifambo had ordered from European manufacturer Vossloh España were too tall for segments of South Africa’s rail network. Swifambo, therefore, did not receive the full contract value of R3.5-billion.

However, an analysis of financial records pertaining to the deal reveals that Swifambo’s former director, Auswell Mashaba, nevertheless had access to a mountain of cash after he had paid Vossloh España about R1.8-billion. He seemingly shared the bounty with a host of apparent partners, dealmakers and shady third parties.

Excluding the payments to the European locomotive manufacturer, Mashaba drained almost R780-million from the two Swifambo entities’ accounts during that period.

The Jacob G. Zuma Foundation is among the myriad recipients of money directly linked to the failed Prasa deal.

Although the R150,000 in question represents only a tiny fraction of the monies Mashaba flushed from the companies’ accounts, it remains significant. 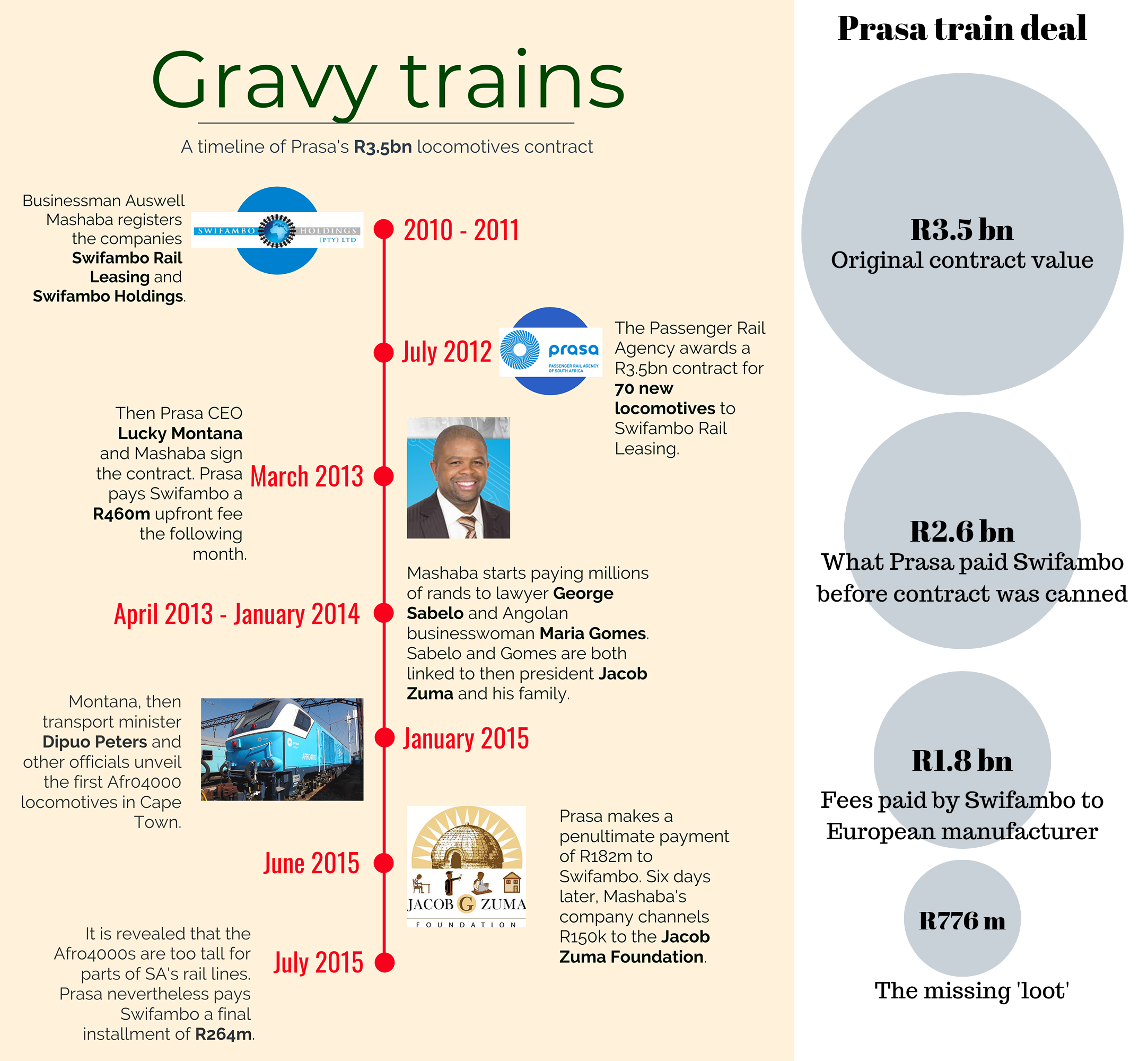 The payment to Zuma’s foundation is yet another indication that the former president may have been directly involved in one of South Africa’s most egregious procurement scandals.

Rapport newspaper previously revealed that Mashaba funnelled some R80-million to lawyer George Sabelo and Angolan businesswoman Maria Gomes. Sabelo is a former business partner of Zuma’s son, Edward, and was implicated in a corruption scandal at PetroSA in 2013.

Gomes has previously admitted that she is a “close friend” of former president Zuma. Some of her neighbours confirmed that Zuma regularly visited her at her upmarket home in Sandton during the time in which the Swifambo deal was unfolding.

Gomes and Sabelo have both denied any wrongdoing in relation to the Prasa contract.

Scorpio attempted in vain to obtain answers from the affected parties in regard to Swifambo’s payment to the Jacob Zuma Foundation.

“I have absolutely no idea what you are talking about. I don’t have any record of those things (Swifambo’s financial affairs). I have closed that chapter in my life and I’ve moved on,” said Mashaba.

Zuma’s spokesperson, Vukile Mathabela, vowed to attend to queries sent via email, but he had not done so by the time this story was finalised.

Scorpio also sent questions to the Jacob G. Zuma Foundation and to former SAA board chairperson Dudu Myeni, who chaired the foundation at the time of the Prasa contract. There were no responses. Myeni also failed to respond to text messages sent to her cellphone. When we tried to phone Myeni, a man answered. He said Myeni would call back, but she failed to do so.

Advocate Terry Motau’s hard-hitting report on the theft of nearly R2-billion from VBS Mutual Bank contains allegations that the former president’s foundation tried to extract a R1-million fee in exchange for securing a massive R1-billion deposit by Prasa into the now-defunct bank.

The attempt to land the “investment” from Prasa occurred in late 2017, but it did not come to fruition.

Meanwhile, criminal investigations by the Hawks and the National Prosecuting Authority (NPA) into the Swifambo affair and other Prasa matters are apparently progressing, albeit at a “snail’s pace”, according to Khanyisile Kweyama, the rail entity’s interim board chairperson.

According to the interim chairperson, the Special Investigating Unit will also probe some of Prasa’s most prominent contracts as soon as President Cyril Ramaphosa signs off on a proclamation for it to do so.

“This entity (Prasa) has been thoroughly destroyed by what has happened here in the past,” Kweyama said in reference to the long list of scandals that have plagued Prasa in recent years. DM