Marching in step: The shared challenges of Colombia and South Africa 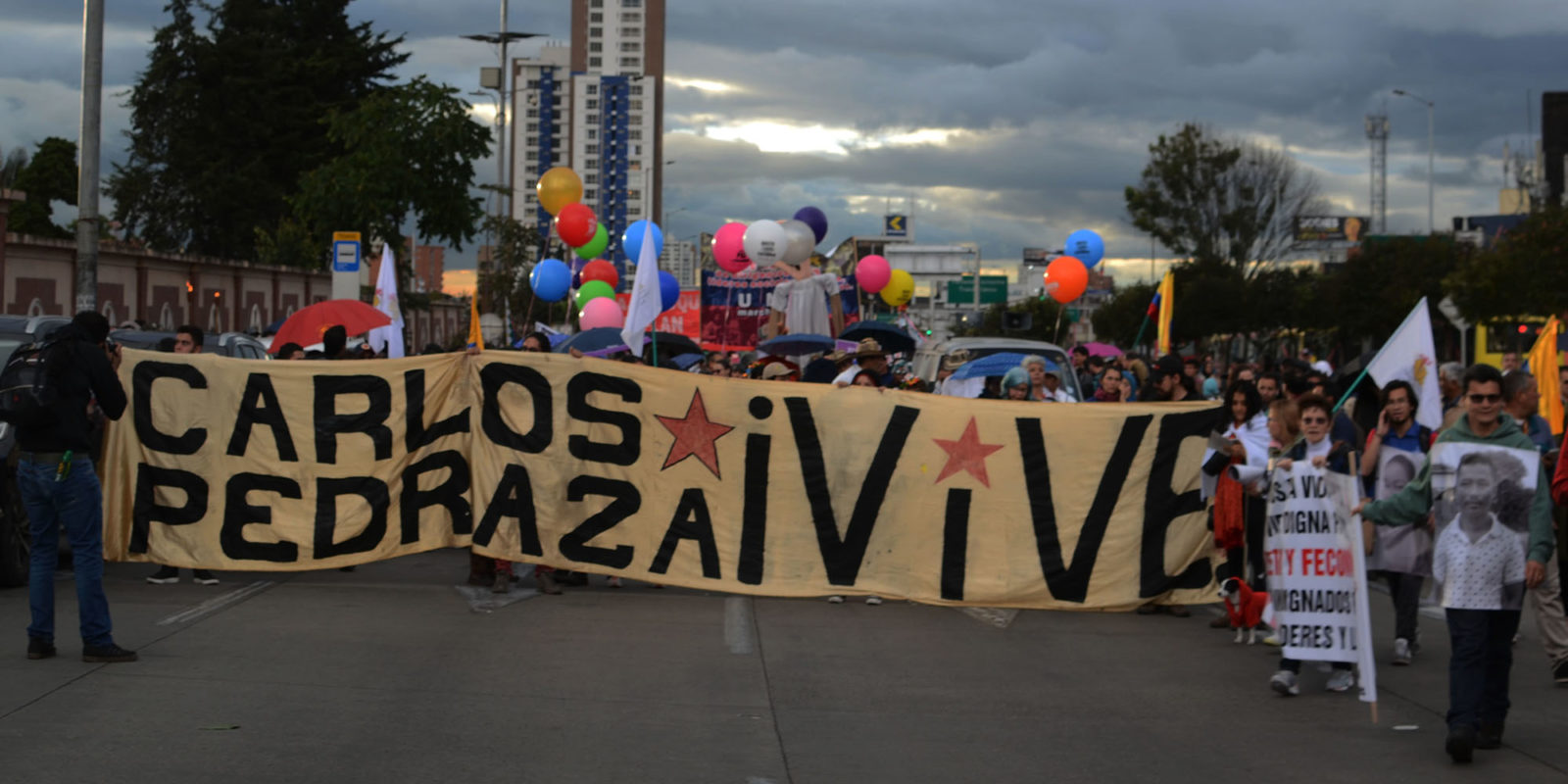 Tens of thousands of Colombians from more than 50 cities across their country came together on 26 Judly 2019 for the March for Life, to demand an end to violence against human rights defenders and community activists. (Photo: supplied)

Colombia and South Africa are on different sides of the world yet share many similarities and have many opportunities to learn from each other’s developmental challenges, especially in how to address deep structural issues such as land ownership and how to better protect their human rights defenders and community activists.

In the early hours of New Year’s Day, Gilberto Valencia said goodbye to his family and friends at a party and left for his home in the sleepy town of Suarez, Colombia. A young man approached him and after exchanging a few words shot Valencia dead in the street.

Valencia was the president of his area’s Junta de Acción Comunal, a community-based residents’ organisation and the leader of Los Herederos (The Inheritors), an award-winning music group that travelled the country using rap, hip hop and breakdancing to teach young people about Colombia’s peace process.

In the last few weeks, Colombia celebrated 200 years of independence from Spanish colonial rule as well as a Wimbledon win and its first Tour de France victory. But set against this joyous backdrop, on 26 July 2019, tens of thousands of Colombians from more than 50 cities across their country came together for the March for Life, a mobilisation to demand an end to violence against human rights defenders and community activists, known in Colombia as social leaders.

Although South Africa and Colombia are two very different countries, they both share colonial legacies, have similarly sized populations, geographies and incredible diversity – in people, culture and ecology. Both countries are home to Nobel Peace Prize laureates, have relatively new, progressive constitutions, and are recognised as being two of the most unequal and violent societies in the world, with profound inequalities in land ownership being an underlying theme in both countries. In Colombia, less than 1% of the population owns more than 50% of productive land, and in South Africa, the government’s recent Land Audit confirmed hugely unequal patterns of land ownership skewed along race lines.

The Marxist rebel group Fuerzas Armadas Revolucionarias de Colombia (FARC) had land and better living conditions for rural populations as key issues when it started fighting the Colombian government in the 1960s. More than 50 years later, with about 260,000 people dead and five million people internally displaced (the second-highest number in the world after Syria), a peace agreement was signed in November 2016. The peace agreement had rural land reform as a dominant theme and allowed for land to be returned to people who had to vacate it during the conflict – those hardest hit being indigenous, Afro-Colombian and other rural communities. As members of these groups now return to their land, they are getting in the way of armed groups and represent the highest number of people murdered.

The Colombian peace agreement brought more stability to the country but it also created a power vacuum, with new criminal groups, FARC dissidents and former paramilitaries vying for control of the lucrative economies that FARC previously controlled. InSight Crime, an independent research organisation, estimated that in 2015 FARC earned between $300-million and $580-million. Taxing the regions that grew coca, the principal raw ingredient for cocaine, brought in $169.5-million a year, extortion more than $75-million a year and about $200-million a year from illegal mining.

When the peace agreement was first put to a national referendum in October 2016, Colombians were divided on the issue, with 50.2% of the population voting against and 49.8% voting for. The Colombian government did not conduct a second referendum but rather revised the agreement with FARC and sent it to Congress, where both houses ratified it in November 2016. The president at the time, Juan Manuel Santos, received a Nobel Peace Prize for having closed a peace negotiation process that started with FARC in the early 1980s.

Gilberto Valencia was murdered on 1 January, the first social leader murdered in 2019. The Colombian monitoring and advocacy NGO Somos Defensores (We Are the Defenders) uses a tool that receives input from a network of more than 500 civil society partners, to track the number of social leaders harassed and murdered in Colombia and is believed to have some of the most accurate figures compared to other monitoring bodies, including the Colombian national government and the United Nations. From when the landmark peace agreement was signed with FARC to the date of the march, Somos Defensores estimates that more than 360 social leaders have been murdered in Colombia and over 1,400 have been threatened.

Many community leaders and human rights defenders were also murdered for raising their voices against illegal mining, the drug trade and environmental issues, and also for being part of a government programme to substitute coca for other crops. The department of Cauca, where Gilberto lived, has one of the highest activist murder rates, accounting for roughly 20% of the national total.

The largest March for Life took place in Bogota, the country’s capital. With colourful banners, street performances, musicians, bands and colourful balloons, it could be tempting from a distance to think it was a massive carnival. Looking closer, people were holding up portraits and names of slain activists. The messaging was clear: “No more leaders assassinated”. “Without social leaders, there is no democracy”. “Not one more”.

Solidarity marches were organised as far as away as London, Madrid, and Montreal. In Bogota, it is estimated that more than 100,000 people took part in the march, embodying all sectors of Colombian society, from politicians, trade unionists, student groups, to those most affected by the murders; campesinos (peasant farmers) and members of indigenous and Afro-Colombian communities. In a country that has a history marked by polarised politics, away from sports, this represents an incredible, albeit painful, moment of Colombians coming together across political lines to support a single issue.

President Ivan Duque, and members of his executive joined a march in the Caribbean port city of Cartagena, where he said: “This is a day for the leaders, for all Colombians…where we reject all kinds of violence against social leaders, but also interfamilial violence, violence against boys and girls, against police, against women.”

In November 2018, the Colombian government released its “Opportune Action Plan” (PAO) which was an interdepartmental strategy to identify and prevent risk situations and protect defenders of human rights, social leaders and journalists. The government identified certain high-risk territories, including Gilberto’s, in which to focus the strategy.

According to Duque’s government, the numbers of social leaders murdered has dropped by 32% since he came to power and 50% since the implementation of the PAO. These statistics came from the Presidential Council for Human Rights and the Ombudsman’s Office, which represent smaller numbers than those presented by an independent monitoring and advocacy NGOs such as Indepaz and Somos Defensores.

Duque’s conservative Centro Democratico party came to power in May 2018, based on another nationally polarising vote, beating the left-wing candidate Gustavo Petro, 54% to 42%. Duque has been seen by many as having been groomed by conservative former president Alvaro Uribe and representing the interests of big business and Colombia’s elite. Duque’s party came to power promising to bulldoze the peace agreement, echoing a dissatisfaction, especially among Colombia’s elite, that the guerrillas got off too easily. Having a government that was opposed to the peace process from the start is a concern for Somos Defensores and other human rights groups, which also note that the peace agreement already included measures for the protection of social leaders.

While the PAO calms national and international pressure by showing that the Colombian government has a plan, there are additional concerns that the highly militarised approach of the PAO doesn’t deal with the structural issues that feed the cycles of violence in Colombia and will not be enough to stop the murders of social leaders.

Other concerning indicators are that there is an existing lack of interdepartmental synchronicity in government; very low conviction rates for murders of social leaders (since the peace agreement they have not surpassed 9.8%); corruption and collusion with the police and armed forces who have had a history of turning a blind eye to attacks against those considered to be “left-wing” sympathisers; and complicity with the private sector who often benefit from the removal of people from their land, which has seen a concentration of land ownership in fewer hands and the expansion of industries such as palm oil and cattle ranching in contested territories.

In South Africa, human rights defenders in communities pursuing their socio-economic rights, especially in mining-affected communities, also face intimidation, threats and violence, although much of this occurs in the shadows. A 2018 report by the Centre for Applied Legal Studies (CALS), based at the University of the Witwatersrand, noted: “There is a considerable body of literature on the attacks of activists around the world, including in Africa. However, there is a dearth of sustained research into what is happening in South Africa.”

Following up on this, more research was done by Human Rights Watch, with a 2019 report that showed community activists in mining-affected communities in KwaZulu-Natal, Limpopo, Northwest, and Eastern Cape had experienced threats, violence and intimidation. The report also noted the use of malicious legal campaigns against them and the disproportionate use of force by police, politicians and non-state actors.

South Africa and Colombia already share some important lessons in terms of transitionary justice and moving on from extremely painful recent histories. Another part of the peace agreement was for the establishment of a Special Jurisdiction for Peace (JEP) to mostly investigate crimes committed by guerrillas and soldiers during the conflict, and to provide leaner sentences to those that voluntarily came to testify. The JEP drew many of its fundamental principles from South Africa’s Truth and Reconciliation Commission (TRC).

In January 2019, ambassador Jerry Matjila, South Africa’s permanent representative to the United Nations, reiterated South Africa’s commitment to assist Colombia in the peace process, saying: “…the killing of social leaders and human rights defenders…. is [a] major concern and presents an ongoing challenge”.

Colombia and South Africa are on different sides of the world yet share many similarities and have many opportunities to learn from one another’s developmental challenges, especially in how to address deep structural issues such as land ownership and how to better protect their human rights defenders and community activists. While in Colombia this is currently a central talking point, in South Africa the conversation is just beginning. DM

Dimitri Selibas is a South African freelance writer and independent consultant who explores ways in which Africa and Latin America, but especially South Africa and Colombia, can meaningfully share lessons and learn from each other. Currently based in Bogota, Colombia.