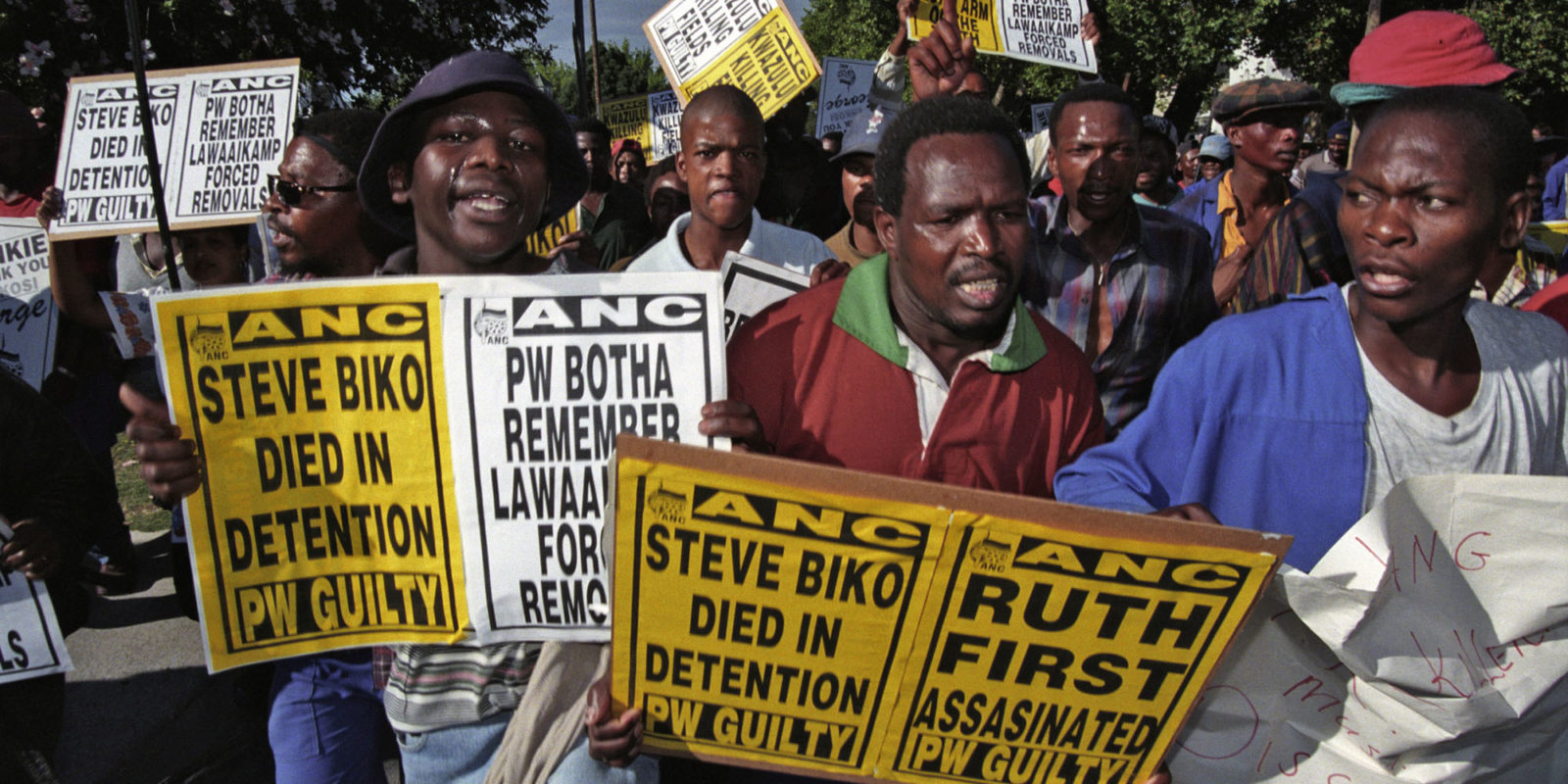 SOUTH AFRICA - 1998: Remembering those that died fighting the system of apartheid, a gathering outside Truth and Reconciliation Commission hearings. (Photo by Gallo Images/Oryx Media Archive)

The National Prosecuting Authority continues to make excuses about why inquests into apartheid deaths have not moved forward. But the families of the dead are getting things done. By Tymon Smith.

With the National Prosecuting Authority (NPA) announcing plans to reopen inquests into the deaths in detention of Neil Aggett and Hoosen Haffejee, it may seem as if it is honouring its recently renewed commitment to helping families of those who died during apartheid finally to get the justice they seek.

Recent revelations about these cases show that the NPA, now led by Shamila Batohi, is not overtly interfering in the prosecution of Truth and Reconciliation Commission (TRC) cases, as occurred during previous administrations. Nevertheless, it is still families and not the NPA who are forced to move matters forward.

Last week it was reported that in both the Aggett and Haffejee cases it was only after threats of legal action against the NPA from the families’ representatives that Batohi said she had asked the judge presidents of Gauteng and KwaZulu-Natal to appoint judges to hear the reopened inquests.

Former justice minister Michael Masutha announced in September 2018 that the inquest into Haffejee’s death would be reopened, but for 10 months – and in spite of numerous appeals by the family – the NPA gave no indication of when this might happen.

Earlier this August, on the eve of the 42nd anniversary of Haffejee’s death at the Brighton Beach police station on the Bluff in Durban, the NPA informed his family that the inquest would not be reopened. This was because the prosecuting authority wanted to wait until it had conducted another investigation.

Bhayampini Mzizi, a traditional healer from Richmond, was found dead, also in the Brighton Beach police station, 10 days after Haffejee died in August 1977. Following a threat of legal action against the NPA by the Haffejee family’s lawyer Anwar Jessop, Batohi announced that she had approached the judge president to appoint a judge to the new inquest. No date has yet been set.

In the Aggett case, there has similarly been little action or correspondence from the NPA as to when the inquest might be heard. It seems the NPA intended to put the inquest on hold to incorporate into their case an investigation into the death of Ernest Dipale, who died at John Vorster Square in August 1982, four months after Aggett’s death there. It was only after the Aggett family’s lawyers put Batohi on notice that she announced she had made a similar request for a judge to be appointed. As yet, there is also no date set for the reopening of the inquest.

The NPA has said that it aims to investigate all 69 cases of deaths in detention during apartheid but in both these cases, they have been forced by families and their lawyers to stop dragging their feet and set the wheels of justice in motion.

In the Haffejee case, both of the KwaZulu-Natal dentist’s parents are dead and his brother Yusuf, who went before the TRC to appeal for an investigation into the death, has also died. Haffejee’s sister is still alive, as are some of the security police implicated in his death, but who were exonerated by a 1978 inquest and did not apply for TRC amnesty.

Likewise Stephan Whitehead, who died in the week it was announced the Aggett inquest would be reopened. The longest surviving of Aggett’s interrogators was found not culpable for Aggett’s apparent suicide by a 1983 inquest and did not apply for amnesty to the TRC.

While Batohi and Minister of Justice Ronald Lamola have both briefly mentioned the Ramaphosa administration’s commitment to taking action in prosecuting TRC cases, it seems recent events in the Aggett and Haffejee inquests paint a different picture. Although the NPA is, according to recent news reports, drastically underresourced, it would still seem it is making excuses for its lack of action on these cases. While it may seem logical simultaneously to investigate deaths occurring at the same location in a short time span, the Inquest Act does not provide for the hearing of cases together. Instead, each needs to be investigated and heard on its own merits, unlike TRC hearings, which often grouped together incidents in an effort to save time.

Hoosen Haffejee was born on 6 November 1950 and grew up in Pietermaritzburg. In 1966 he went to India to study science and dentistry before returning to South Africa in 1976, taking up an internship at King George V Hospital in Durban. According to his late brother Yusuf, Haffejee was politically active in his youth although it has always been unclear whether at the time of his arrest he was affiliated with any political organisation.

However, it seems that he was a person of interest for the Security Branch, which picked him up on the morning of 3 August 1977 and took him to Brighton Beach for interrogation. He was found dead in his cell, hanging from his jeans tied to the cell bars, 20 hours later. The two security policemen who had made the arrest, Captains James Taylor and PL Du Toit, denied they had tortured Haffejee during his interrogation and claimed he had committed suicide as a result of his guilt at breaking under questioning.

During the forensic inquest into his death, it was found that Haffejee’s body was riddled with over 60 wounds on his back, knees, arms and head. The magistrate, Trevor Blunden, concluded they were not connected to his death and ruled his death a suicide. He claimed that “submissions that other injuries found on the dentist’s body were due to third-degree methods, were pure speculation unsupported by evidence”. This was another death in detention swept away by the finding that no one was to blame except, of course, Haffejee himself.

At the TRC in 1996, Mohun Deva Gopal, a former Brighton Beach Security Branch policeman, testified that he had been present at Haffejee’s interrogation and had watched Taylor and Du Toit strip the young dentist naked and administer increasingly severe beatings during his interrogation. When Taylor was subpoenaed to appear before the commission, however, he denied all allegations against him and refused to apply for amnesty.

For over 40 years the Haffejee family fought to find out what had happened to Hoosen and only now have their pleas been answered, but what the reopened inquest will find remains to be seen. For Sarah Lall, 74, Haffejee’s sister, the process has been “frustrating. All we need is closure and to prove that my brother did not commit suicide. He was tortured,” she told the Sunday Tribune.

The threats of legal action that prompted Batohi’s decisions are only the latest in a long line of cases where families have had to resort to such measures to get definite answers from the government. The first two cases in the post-apartheid era to receive adequate responses from the state – the prosecution of former Security Branch members involved in the disappearance and alleged murder of Nokuthula Simelane and the reopened inquest into the death of Ahmed Timol – went to court only because of similar threats of legal action against the prosecuting authority.

The Simelane matter has still to return to court after lengthy bureaucratic backs-and-forths about lawyers’ costs, dockets and other sideshows that have already seen one of the accused die before he could answer questions about his involvement. The Timol matter is also now in legal limbo because of a fight between the state and former Security Branch clerk Joao Rodrigues who is appealing against his prosecution for his involvement in the teacher’s death at John Vorster Square in 1972.

Meanwhile, two letters written by former TRC commissioners and others to President Cyril Ramaphosa calling for an inquiry into allegations of political interference in the prosecution of post-apartheid cases have been received but not yet responded to. A similar appeal by Lukhanyo Calata, the son of Cradock Four victim Fort Calata, to the Zondo Commission of Inquiry has likewise yet to receive any proper response.

Writing in the London Review of Books in May 2019, British academic Jacqueline Rose commented on the pursuance of justice in South Africa for those who lost loved ones during the Struggle and the way that failure to provide answers causes continued and deep-set trauma that cleaves through post-apartheid society. She said: “Something unprecedented still has to happen. There will be no political emancipation for anyone till we all recognise the corpse lying on the road, the continuing injustice, the work that remains to be done.”

If the NPA is now planning to finally be the institution mandated by the Constitution in the search for justice for apartheid victims, it needs to do more than talk about action. It is to be hoped that soon there will be some answers for the Aggett and Haffejee families.

If the prosecuting authority wishes to abandon its lip service and show true commitment to victims and their families, the next case to be investigated should be accompanied with an announcement of a judge, a trial date and an accused who is still alive and due for a reckoning with his or her past actions. Otherwise, there will be no possibility of closure for so many families. DM