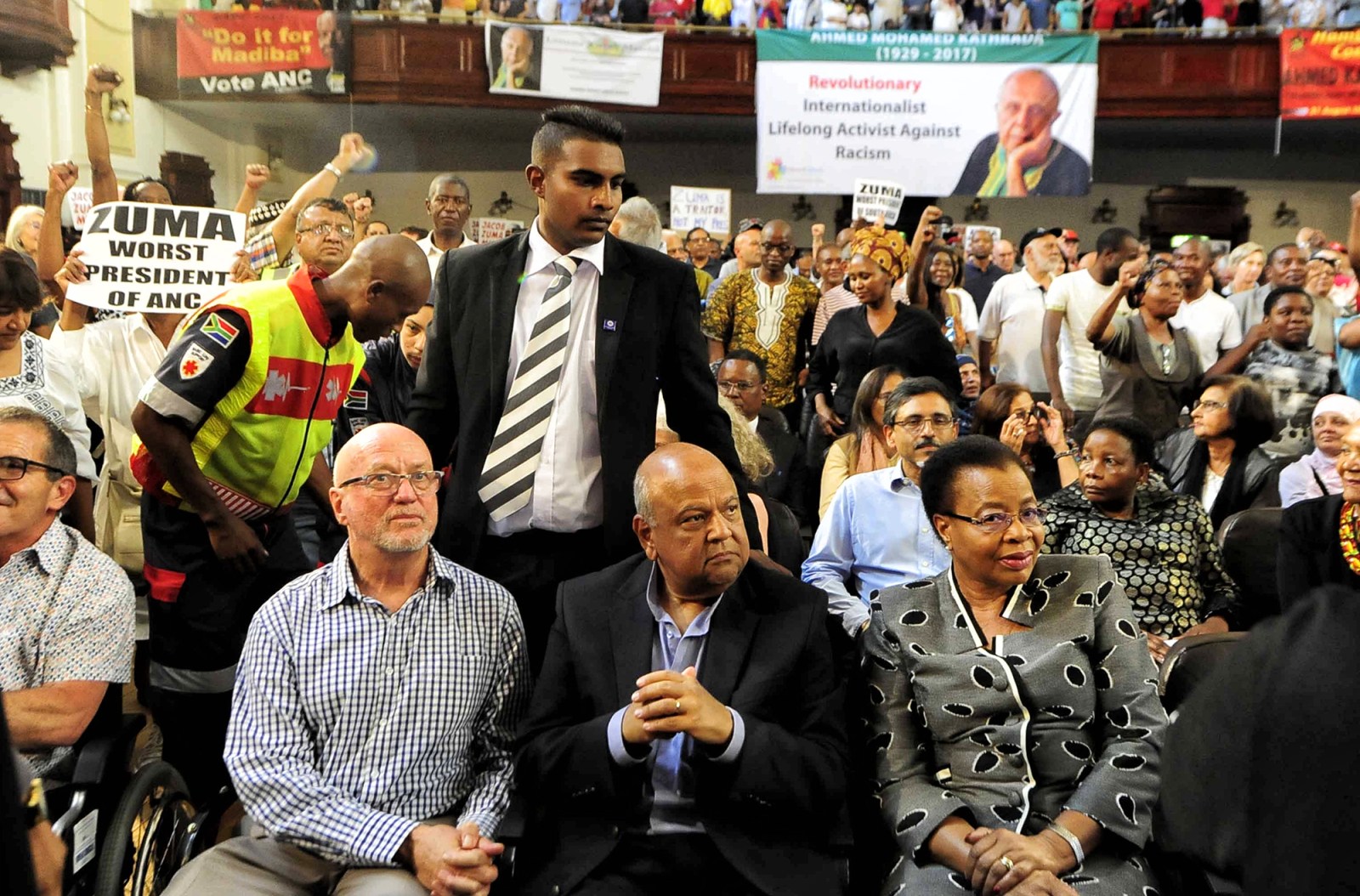 Pravin Gordhan, Derek Hanekom and Graca Machel during the official memorial service of struggle icon Ahmed Kathrada on April 01, 2017 in Johannesburg, South Africa. Chants of "Zuma must fall" erupted as Ahmed Kathrada’s widow, Barbara Hogan, declared at his memorial service on Saturday that President Jacob Zuma worshipped at an altar of corruption and must step down. (Photo by Gallo Images / Sowetan / Thulani Mbele)

Any Struggle veteran or ANC member would rather live with a virulent flesh-eating bacteria than face an accusation of being an ‘agent or spy’. For Derek Hanekom it is a claim by Zuma that stung deeply.

Out of the liminal Twitter woodwork they came, Jacob Zuma and Julius Malema, like a twin-headed twar machine, and in one virtual pincer movement over two days in July 2019, targeted former Cabinet minister, ANC member of the NEC and liberation movement stalwart Derek Hanekom.

On 25 July, Jacob Zuma, using the platform of his Twitter account with its 300,000-odd disciples, tapped out:

“I’m not surprised by @Julius_S_Malema’s revelations regarding @Derek_Hanekom. It is part of the plan I mentioned in the Zondo Commission. @Derek_Hanekom is a known enemy agent.”

Two days before, the EFF leader had taken the time to tweet to his 2.5 million virtual followers:

“Hanekom gave us the list of ANC MPs who were going to vote with us in the vote of no confidence against Jacob Zuma.”

“Today he calls us fascists, but Derek Hanekom plotted with the EFF to bring down President Zuma. The same goes with Solly Mapaila [deputy general secretary to the SACP] too.”

In an affidavit filed by Hanekom to the KwaZulu-Natal High Court where he is claiming R500,000 in damages for defamation from Zuma, Hanekom wrote:

“Mr Zuma accordingly used Mr Malema’s statement as a springboard to say that I am an enemy agent in the context of the evidence he gave at the Judicial Commission of Inquiry into Allegations of State Capture, Corruption and Fraud in the Public Sector Including Organs of State, chaired by the Honourable Deputy Chief Justice Raymond Zondo. The nub of that evidence was that ‘the plan’ against him [Zuma] was the work of among others, apartheid spies who had infiltrated the ANC.”

Hanekom’s legal representatives, Webber Wentzel, filed the notice with the court on 5 August seeking to have the matter heard on 21 August.

Serving the papers on the country’s No 1 Artful Dodger and Master of the Stalingrad Strategy, Jacob Zuma, proved an epic quest for Webber Wentzel candidate attorney Samantha Owen.

Owen, in an affidavit filed alongside Hanekom’s, detailed her frustration at finding Jacob Zuma and how the firm and its proxies were sent from Gauteng suburbs to rural KZN to try to physically hand over the notice to either No 1 himself or a least his last known legal representative, Lugisani Mantsha, who proved equally tricky to pin down.

Daily Maverick has reliably learnt that Mantsha has subsequently gone on record (after claiming at first he was not authorised to receive the service) confirming that No 1 will indeed be filing a responding affidavit through his firm.

The depth of the insult and sting of Zuma’s accusation is palpable in Hanekom’s affidavit setting out why the unsubstantiated claim had tarnished his “good name and reputation”.

“My purpose in bringing this application is to vindicate my dignity and hard-earned reputation. To this end, I see various orders aimed at vindicating my good name, putting an end to the ongoing and anticipated unlawful publication of the allegations in the statement, and compensating me for the harm I have suffered,” said Hanekom.

Zuma’s statement, said Hanekom, “casts aspersions on my character and integrity, particularly in light of my history as someone who fought vehemently against the apartheid government and together, with the people of our country, for the freedom of our nation”.

The former president of the Republic of South Africa had made the statements, said his former Cabinet minister, “without any basis in fact. They are entirely false.

“I am and have never been a spy for the apartheid government or any other authority for that matter. Mr Zuma has no evidence to support his allegations. And yet, he refused to remove the statement from his Twitter account.”

Under the title “Factual Background” Hanekom set out his struggle history and said his is a “reputation as a leader with integrity”.

For his entire career in politics, he added, “I have enjoyed a reputation of being a loyal and disciplined member of the ANC and a patriot, and of upholding the values of freedom, transparency and accountability.”

In light of this, Hanekom said, and in the context of “the sacrifices which I have made during my lifetime as an anti-apartheid activist the statement is particularly malicious, hurtful and damaging to my reputation”.

Zuma’s claim, he told the court, should be seen in the context of his testimony to the Zondo Commission of Inquiry between 15 and 19 July 2019.

“During his introductory remarks on the first day of his testimony, Mr Zuma described a ‘plan’ which he alleged was implemented by foreign organisations working with the apartheid government to plant spies within the ANC and to assassinate both him and his character.”

Hanekom says Zuma intended his Twitter comment to mean — and it was understood as such — that he [Hanekom], like former ministers General Siphiwe Nyanda and Ngoako Ramatlhodi, “was a spy who had infiltrated the ANC on the orders of the apartheid government and its foreign sympathisers”.

“It is accordingly necessary to discuss aspects of his testimony in order to provide this honourable court with the proper context within which Mr Zuma’s statement was made. I pause to note that, as I was not mentioned during testimony before the Zondo Commission, cross-examination of Mr Zuma in order to test the veracity of his statement about me was not an option available to me. In that light, I have no other option but to turn to this honourable court in order to protect my rights.”

The reach of Zuma’s statement had been widespread, said Hanekom.

Zuma had 323,000 followers on Twitter and his statement about Hanekom had received 1,817 comments and had been retweeted 2,902 times from Zuma’s account.

The Twitter statement had also been picked up by the media and had been widely published across platforms.

Since Malema and Zuma had polluted the twittersphere, said Hanekom, “I have been treated with severe aversion, suspicion, distrust and hostility by many people, including other members of the ANC, as a result of the statement.” He said he had also been called an Askari (a “turned” ANC cadre) and an “impimpi” (a snitch).

Hanekom added that not only was Zuma’s statement false (in other words a lie) but it was “inconceivable that Mr Zuma could have genuinely believed it to be true”.

“Mr Zuma is fully aware of my history as an anti-apartheid activist and loyal member of the ANC. When I first met Mr Zuma in 1988, shortly after my exile to Zimbabwe as a result of my political activism, Mr Zuma thanked me for my contribution to the liberation struggle,” said Hanekom.

That was then, this is now.

In fact, when Zuma himself became president, he had chosen to appoint Hanekom as his Minister of Science and Technology from October 2012 to May 2014 and thereafter Minister of Tourism from 2014 to 2017.

“If he honestly regarded me as an ‘enemy agent’ he would not have done so,” said Hanekom.

Zuma, should Hanekom emerge victorious in this matter, might have to sell more than just his socks to cough up the amount sought as well as pay for Hanekom’s legal costs. DM