Monday’s collapse in the value of the Argentinian peso and crash of that country’s stock market should alert SA investors to the dangers of keeping all your eggs in one basket.

The Argentine peso fell by 30% and its stock market by 37% on Monday 12 August, the worst market collapse for the country in decades. In dollar terms the second-largest single-day drop in any global stock market since 1950, according to Bloomberg. (The worst was Sri Lanka.)

The peso fell further on Tuesday before stabilising on Wednesday at 18 US cents to one peso.

Some of Argentina’s largest companies, including oil giant Pampa Energy and banking heavyweights Financiero Galicia and Banco Macro, saw their shares fall by as much as 47% as investors panicked, selling stocks and bonds and pushing the nation once again to the brink of a financial crisis. The country has defaulted on its debt eight times since independence from Spain in 1816.

The panic was triggered by unexpected primary election results which suggest that Alberto Fernández and former president Cristina Fernández de Kirchner will beat President Mauricio Macri by a wide margin come the elections in October. If that happens, investors fear an economic collapse and wide-ranging debt defaults.

For Argentinian investors, this was an expensive lesson in what is dubbed home-country bias, a behavioural finance concept where investors tend to prefer local investments because they feel more familiar with these opportunities.

“Home-country bias has taught Argentinians a tough lesson as their net worth has halved in one trading session,” says Bright Khumalo, an analyst with investment firm Vestact.

“Most South Africans have 75% of their wealth on the JSE, yet we have seen how bad this can be. Diversify your geographies!”

Many people grapple with the idea that it is perhaps unpatriotic to move investments away from the JSE to markets offshore, says Andre Basson, a financial planner with Brenthurst Wealth Management. But investing should not be a patriotic duty, he says. Investing is an allocation of capital at a location where you have the potential for gaining a good return for the risk you take on.

While emerging markets such as South Africa, China and India have the potential to offer great returns, the risk that the return might not materialise, as Argentinians have learnt, is also real.

The JSE is a relatively small exchange globally, with a market capitalisation of about $950-billion. In comparison, the New York Stock Exchange has an approximate market capitalisation of $23-trillion. However, because the South African rand is heavily traded globally, foreign investors can invest in the JSE with relative ease, compared to many other emerging markets.

“We seldom see the JSE move in an opposite direction to international markets,” says Basson. When markets are down globally, the chances are that the JSE will also be down. The influence of global investors has much to do with this movement. International sentiment plays a large role in investment in the JSE and the view of global investors does impact the outlook of the JSE.”

While it is true that the JSE All Share Index tends to move in the same direction as the MSCI World Index (a global equities index that roughly equates to the market performance of 23 developed countries), it does not mirror this growth.

If you were to make a comparison to the S&P 500 (an index of the top 500 listed companies in the US by market capitalisation), the JSE All Share is falling even further behind, he says.

The graph below from Bloomberg shows this long-term divergence in growth. Since 2014, the JSE All Share Index has lost more than 60 points to the MSCI World Index, and a staggering 100 points to the S&P 500.

Market movements in the past 10 years 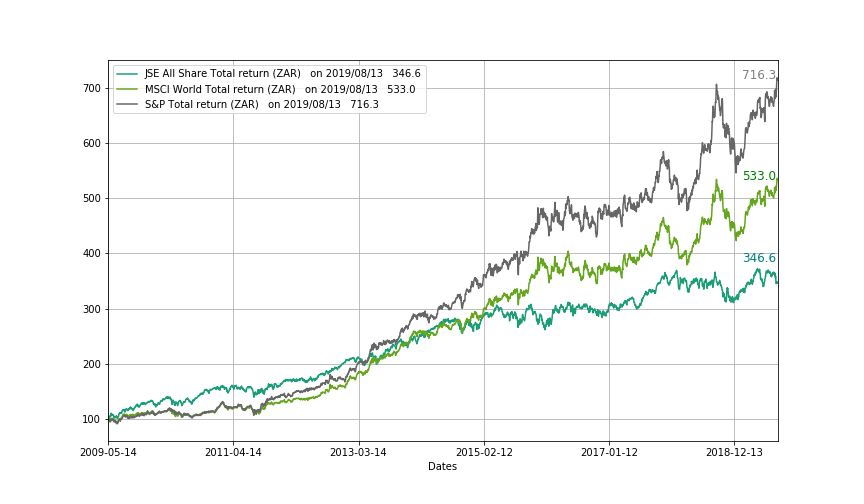 “The point here is that if we do not fix the deep structural problems within South Africa, this long-term divergence trend will only continue,” he says.

Fortunately, the issues in Argentina have not made a huge impact on other emerging market (EM) bond or currency markets…yet. Most of the market focus has been on the effect of US/China trade issues on US and world growth prospects and the subsequent direction of US interest rates.

In SA, the Moody’s downgrade potential and increasing domestic bond issuance to fund Eskom have had a negative effect on bond yields and the rand (the weakest of the EM currencies besides the Argentinian peso).

“That said, we haven’t seen the dramatic moves in the rand or EM currencies generally that Argentina experienced in the last few days,” says Ray Wallace, chief investment officer at Taquanta Asset Managers. “The rand has actually strengthened back to 15.20 today from R15.50 a few days back and bonds yields have steadied for now.”

However, the fallout from Argentina, although “ringfenced” for now, reflects the potential longer-term danger of a move towards “populist” politics and the subsequent effect on sentiment, he says.

Despite all its obvious economic policy shortcomings, SA has a well-functioning financial infrastructure, banking system and a liquid currency and bond market, which, together with enticing bond yields, are attractive to speculative foreigners and the carry trade, for now.

“But if sentiment changes negatively as a result of returning to a populist style of government (and possibly combined with a downgrade) like Argentina, then we are in for a roller-coaster ride.”

The moral of the story? Diversify your investments. BM