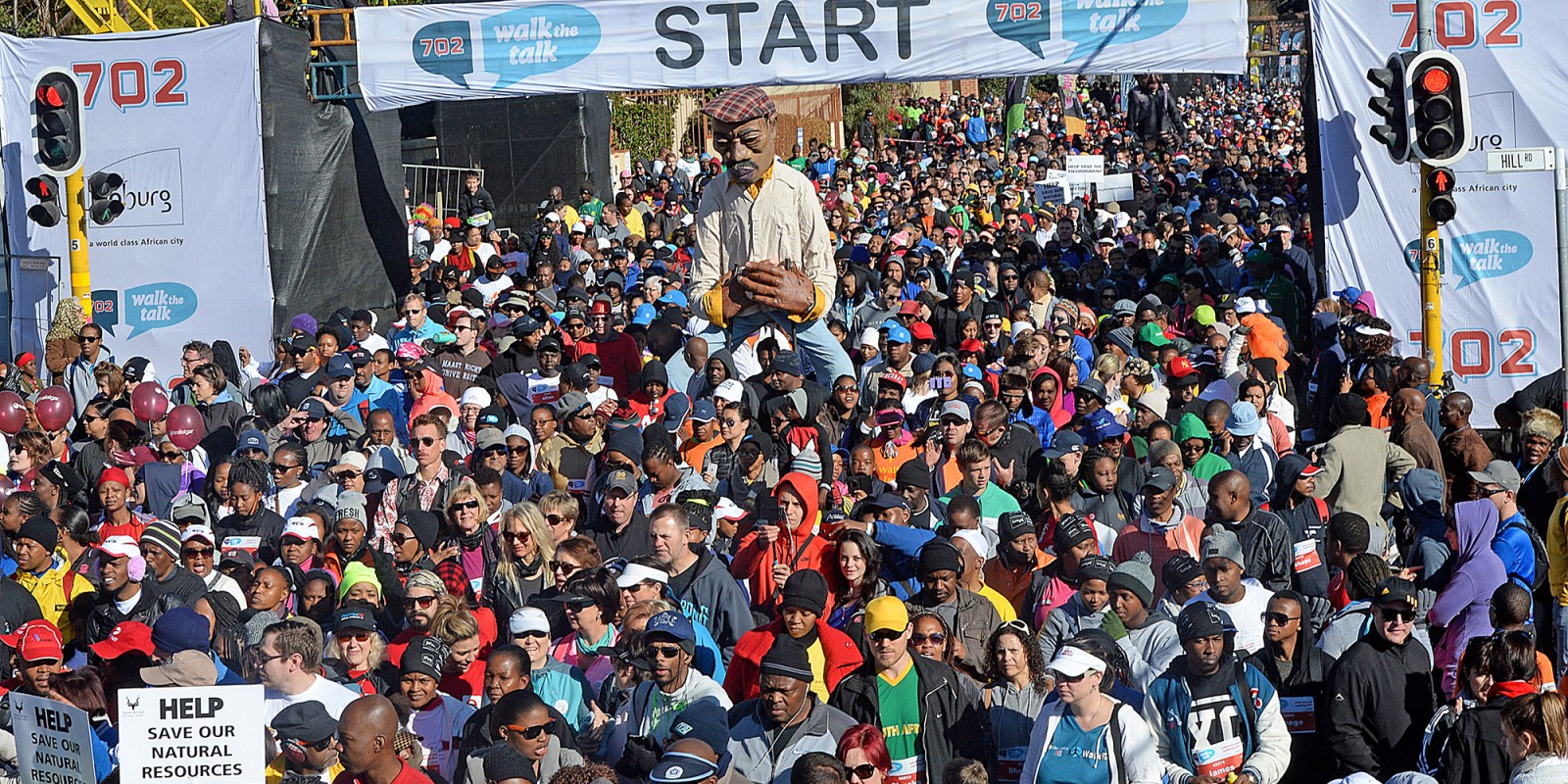 JOHANNESBURG, SOUTH AFRICA – JULY 26: Participants during the ‘702 Walk the Talk’ event in Johannesburg, South Africa. Thousands of people braved the cold to take part in this year’s walk themed ‘Walk for a Cause’. (Photo by Gallo Images / Beeld / Denzil Maregele)

Is the beverage industry getting away with unfair and unethical advertising aimed at underage children by sponsoring beverages at family walk events? By Thabo Molelekwa for Heath-e News.

Every year, the MTN Walk the Talk with 702 brings families together to promote healthy living by walking. Roads are barricaded, walking and running shoes donned and people from all walks of life test their endurance and bonds through this event. This, and other similar fun walks and runs have become ubiquitous on Sundays across the country and while some kind of cause is at the core of it, the idea of collective and easy-going exercise and healthy living is ever-present.

But under this healthy veneer, beverage manufacturers such as Coca-Cola South Africa often supply drinks at the water points along the route, as Health-e observed at the MTN Walk the Talk.

Activists argue the company has used the opportunity to advertise and market sugary drinks to children — particularly because these events are often promoted as family events.

Currently, South Africa has no legislation that prohibits advertising to children except in the case of breast milk substitutes and complementary foods for children under three years.

Additionally, the country’s advertising industry is self-regulated through the independent Advertising Regulatory Board and its code of conduct. The code states that advertising shouldn’t exploit children’s lack of experience and gullibility and that their loyalty should not be strained.

Over the past two years HEALA, an advocacy group aimed at improving health by creating a healthier food environment, has held pickets at the MTN Walk the Talk.

“The industry is getting away with unfair and unethical advertising practice to underage children. It will never self-regulate except for cheap talk and pledges that they have never owned up to,” says Mbalati.

“Advertising and sponsorship by Coca-Cola at an event aimed at promoting healthy living is both hypocrisy and (shows) double standards,” he said.

Coca-Cola has pledged twice previously, in 2009 and 2012, to stop advertising to children under the age of 12. A study conducted by Wits Public Health research unit PRICELESS found that that 50% of schools in Soweto had Coca-Cola signs on their grounds five years after the beverage giant had pledged to no longer market to children. In statement, Coca-Cola said all signboards had since been removed from primary schools across South Africa.

The soft drink company says the distribution of drinks at the individual water points was at the sole discretion of the organisers.

“The only point where Coca-Cola Beverages South Africa directly distributed drinks was at the finish point where they handed out units of Smartwater, our no kilojoule water brand, to each participant of the event,” says Asyia Sheik-Ojwang, head of public affairs, communications and sustainability at the Coca-Cola South African franchise.

Coca-Cola says each water station was managed and run by the organisers of Walk the Talk, who had requested that water sachets, Powerade or Coca-Cola products be available. This was served in 175ml paper cups.

Meanwhile, the organisers of the walk didn’t provide an answer when Health-e asked whether or not Coca Cola sponsored the drinks for free. However, 702 says “it is presumed that parents would prescribe what their children consume along the route”.

The radio station’s marketing department further explains: “702 moved away from a cup of Powerade which was the only hydration offered in the past years at the finish line… Walkers are offered a 150ml cup of liquid per water point and can choose from the offerings as mentioned above. As 702 we understand that walkers require hydration commensurate with their energy output on route.”

Coca-Cola Beverages South Africa says it recognises that too much sugar is not good for anyone and supports the recommendation by several leading health authorities, including the World Health Organisation, that people should limit their intake of added sugar to no more than 10% of their total energy per kilojoule consumption.

“Coca Cola respects and supports the role of parents and caregivers at the event and acknowledges that they’re best placed to make the right choices for their children,” Sheik-Ojwang says.

Coca Cola’s no sugar products were also promoted at the event, she said.

“We have a global responsible marketing policy that covers all our beverages, in which we commit to not market any products directly to children under 12.”

She says that in line with policy, the company doesn’t place any of its brands’ marketing in any media which directly targets children under 12, including shows, print media, websites, social media, movies and SMS/email marketing.

Thembi Mashego, a participant at the walk, says living a healthy lifestyle is not only physical — diet is also important.

“One of the best things is to stop is sugar – your body doesn’t need sugar,” says Mashego, explaining that people can get sugar from fruit and other natural foods.

“Sugary drinks are poison. I don’t take a drop of them and my grandchildren know that when I find a (soft drink) in my house, I destroy it.”

HEALA continues to advocate for a 20% tax on sugary drinks.

“This, combined with other effective interventions, will significantly contribute to reduction in consumption of sugary drinks and non-communicable diseases,” Mbalati says.

The organisation also calls on the government to introduce policies to end advertising of junk food and sugary drinks to children. But until then, the food and beverage industries have the responsibility of self-regulating. DM