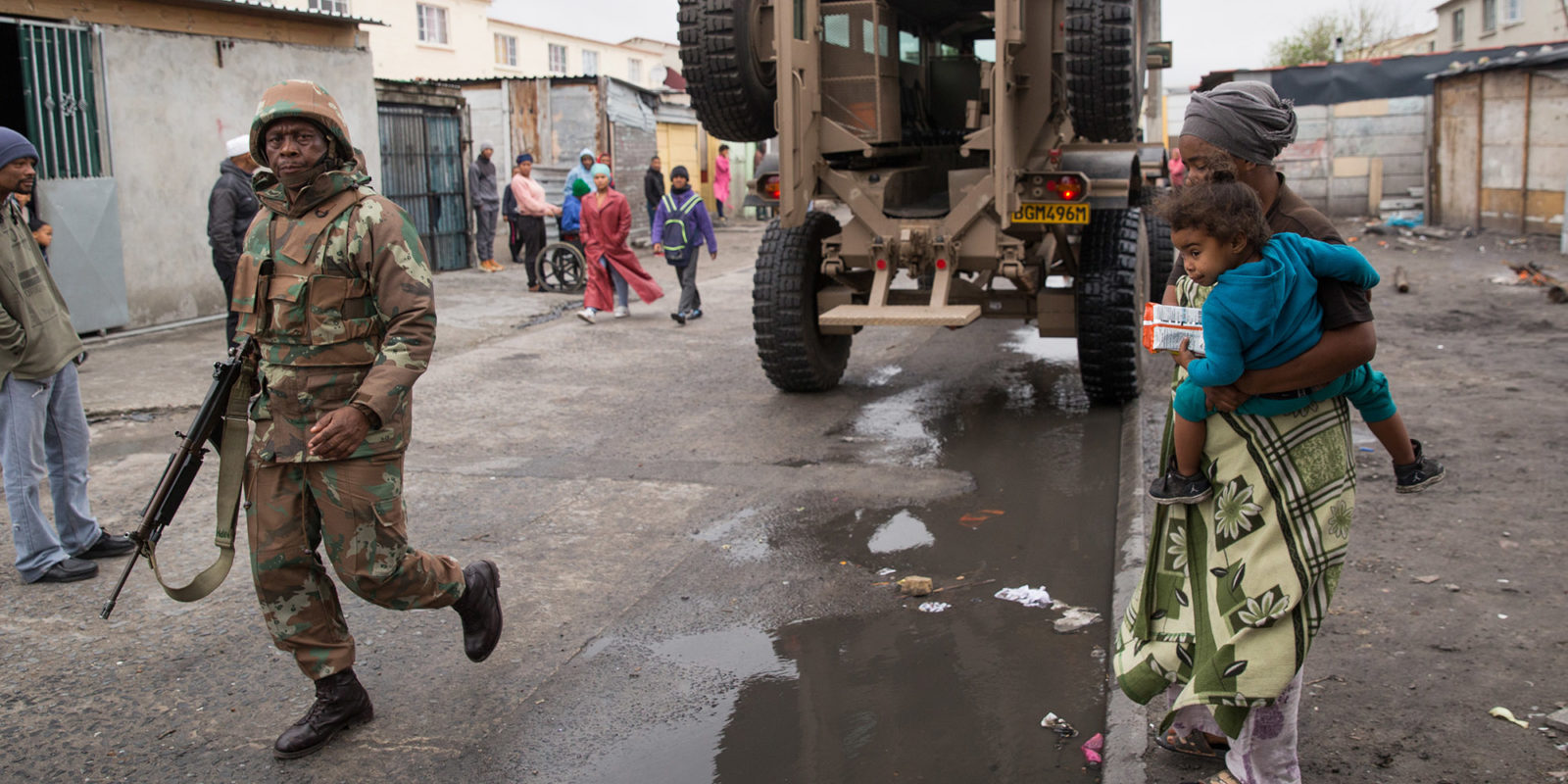 The war metaphor is a powerful rhetorical tool that shapes perception and policy around gang prevention in Cape Town.

Violence in the Mother City is frequently described in the context of “gang war”. Conflict is newsworthy, so war metaphors can be evoked to convey an urgent emotional tone that captures public attention and motivates action. Speaking of “gang conflict”, “gang battles”, and “civil war” also points to important intersections between the risk factors and scale of armed violence and armed conflict. Advocates also draw on internationally recognised classifications like “child soldiers” and agitate for legal protections and support for young people who are exposed to insecurity and trapped in violence. I too have resorted to fighting words when writing about gangs in Cape Town – thinking of them as an expedient rhetorical device.

But the most recent addition of the South African National Defence Force (SANDF) to anti-gang efforts across the city has made me reflect more critically on the conditions that make such foolhardy policies possible – and how I may have contributed to them as a researcher and journalist. Specifically, I have come to re-think how the widespread use of combat metaphors taps into what is perhaps the most cynical rule of news-making: “if it bleeds, it leads”. As the SANDF rolled out, I realised that the bloody language that I used to study and write about gangs is neither purely academic nor simply objective reporting. It shapes public perceptions of an issue and discussions around it – turning a social problem into a military one.

Defining the debate this way implies that solutions to “gang wars” can be found in retaliation against, or destruction of, supposed enemies. Western Cape Premier Alan Winde, for example, advocates for a “multi-pronged peacekeeping approach” to win the Mother City’s “war on crime”. President Cyril Ramaphosa echoed these combative pronouncements with claims that the government is “winning the war” against gangsterism in the Western Cape. Media and academics describe a “war on gangs”, trumpeting inevitable calls for “peace” and “peace-building”; for my part, I have written of “turf wars” and “fierce battles… between rival gangs”.

However, as noted gang researcher Sonja Wolf, labelling gang rivalry as armed conflict “made the gangs appear much more goal-oriented and threatening than they were. Worse, it portrayed gang violence as the problem while diverting attention from the structural context that gives rise to gangs. Thanks to this kind of media coverage, gang members became the new public enemy, who could be targeted with malicious force and extreme violence”.

Studies of gangs in Cape Town likewise indicate that presenting them as a threat to the state and economy permits extreme responses to protect against a predatory menace attacking an otherwise “good society”. But, of course, gangs are not at war with Capetonian society; they are that society. Criminologists have long accepted that gang formation is a normal social response to abnormal conditions of social disorganisation, joblessness, exclusion, racism, etc. A policy of war metaphor shifts attention away from the social strategies that could actually improve how society is structured and how its benefits are grown and expanded while relying on imagery is often negative and destructive. Seen like this, war is not simply politics by other means. It is an indication of how politicians and their policies have failed.

The deployment of the army in Cape Town is meant to end after three months when the government suggests the gang problem will be “normalised”. There has already been a considerable commentary on why this strategy is unlikely to succeed, a view that is supported by prevailing international gang writings. Thus, a return to a supposed state of normality likely means ongoing gang violence, and more suffering wrought by its devastating effects on life, livelihood, and community. So too will journalists and researchers continue to grapple with gangs in Cape Town. Our words cannot ease physical or psychological trauma; nor can they themselves create community development, or increased security. But we can be more accountable for what we write. To keep parroting the conflict narrative is to tacitly support the idea that there are armies to mobilise and enemies to defeat. The end result of which will undoubtedly be more reactive militarised solutions. After all, what opportunity is there for meaningful policy discussion when a city is on a war footing?

So, let us remain conscious of the way that language underwrites discussions on gangs and violence. This means avoiding the propagation of incendiary descriptions used by politicians and focusing on reporting away from combat stories. Instead, more emphasis must be placed on the lives of those affected by gangs and violence, and their heroic struggles to cope with and overcome it; they are not simply street soldiers and victims of gang wars, but rather they are: men, women, and children living in communities badly in search of solutions to the social problems affecting them. Tell their stories through texts that rely less on metaphor and myth can be useful for demystifying issues and revealing appropriate solutions. Otherwise, it should also be part of the personal and professional remit of every person writing about gang issues in Cape Town to recognise the limitations of hostile symbols and imagery.

Let us self-critically encourage constructive intellectual creativity that extends beyond the fog of war. Military metaphors themselves can be replaced with others that are non-violent, constructive, and socially-oriented. More positive and deliberative narratives will tell a story that evokes both humanity and struggle, but while also speaking about real people, real problems, and real policies and programmes – rather than further contributing to false starts towards “securing the peace”. DM

Dariusz Dziewanski is a researcher working on gang issues in Cape Town and is currently writing a book entitled Beyond the Street: Gang Exit in Cape Town. He has more than a decade of research experience in international development and humanitarian settings around the world. Dziewanski holds a doctorate in development studies from the University of London’s School of Oriental and African Studies. You can follow him at: @ddziewan.