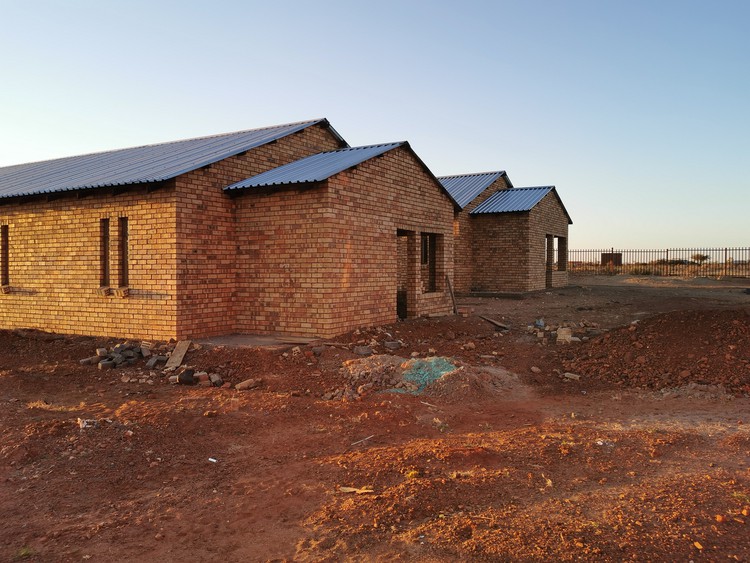 #DodgyLottery part four: R17m has been spent on the Kuruman facility

The Sanctuary Drug Rehabilitation Centre, like the multimillion-rand Lottery-funded old age home in Kuruman, is still incomplete despite receiving R17-million in pro-active funding from the National Lotteries Commission (NLC) almost two years ago.

The rehab will be run under the auspices of Sanctuary Ministries, a Kimberley based non-profit organisation.

Although the rehab is still under construction, Tsietsi Maselwa, the NLC’s head of legal, said in an email on 19 September 2018 that the facility was “80% complete”.

But almost a year later when we visited Kuruman in mid-July, the facility was unfinished and still a building site with rubble scattered around it. Most of the buildings do not yet have doors or windows and there are foundations where it appears buildings are still to be built. Comparing photographs from mid-July to ones taken at the site late last year reveals little progress.

The chairperson of Sanctuary Ministries is Bishop Mohau Shuping. He died earlier this year, but he is still listed as a director of Abrina.

A company search using Shuping’s identity number shows that he is still listed as a director of multiple companies, most of them involved in mining. Shuping described himself variously as a “pastor”, “lawyer” and “businessman” in different company listings.

The original plan was for the rehab centre to be built in a township in Kimberley.

In 2017 Sanctuary Ministries, represented by Shuping, was one of seven companies and organisations that applied to buy land from Kimberley’s Sol Plaatjies Museum to build a drug rehabilitation facility in Galeshewe township.

Two different sources allege that the NLC paid the first tranche of R7.5-million before it had confirmation of a site where the rehab would be built.

After long delays and protracted legal battles the Provincial Government Kimberley facility was officially opened in April this year.

But after the process to acquire land in Kimberley was delayed, a decision was taken to move the facility to Kuruman, according to the NLC.

Ignoring a question as to whether the NLC was aware of the plans for a provincial government-funded drug rehabilitation centre in Kimberley at the time that they approved an NLC-funded rehab in the city, NLC spokesperson Ndivhuho Mafela said: “The NLC is aware that there were delays due to the issue of land which prompted the organisation to relocate the project to another area in the province where it will serve the same purpose.”

Sanctuary appointed Rembu Construction – a construction company with offices in Polokwane, Gauteng and Bloemfontein – to build the rehab. This upset some Kuruman locals who questioned why a local company had not been chosen.

And, despite a lack of progress in the construction of the rehab, the NLC nevertheless paid the second R7.5-million and R2-million tranches.

In November 2017, Sanctuary Ministries posted pictures of the “launch” of the rehab project on Facebook, inviting people to attend a celebratory event.

The jubilant post read: “FAITHFUL Jesus!!!! Let’s come and celebrate what God has done in our midst … It’s the launch of our Drug Rehabilitation Centre…”

At a press conference in March 2018, Shuping said that the rehab centre would open the next month.

He said: “We acquired lottery sponsorship to the tune of R17-million which we channelled towards the centre’s construction of a 20 in-bed facility with recreational amenities and an administration block. We [are] happy that [Northern Cape MEC for Social Development, Gift] van Staden will conduct an inspection visit ahead of its opening in April.”

Sources with knowledge of the project told GroundUp that agreements with government departments or other suitably qualified service providers to staff and run the facility after completion are yet to be concluded.

“As this is a pro-actively funded project the NLC is at this point embarking on assistance for licensing of the facilities, capacitating the caregivers in collaboration with DSD (Department of Social Development) and to ensure a proper handover of the facility for sustainable care by the DSD,” the NLC’s Mafela said. DM

Part one: Conflicts of interest and incomplete projects