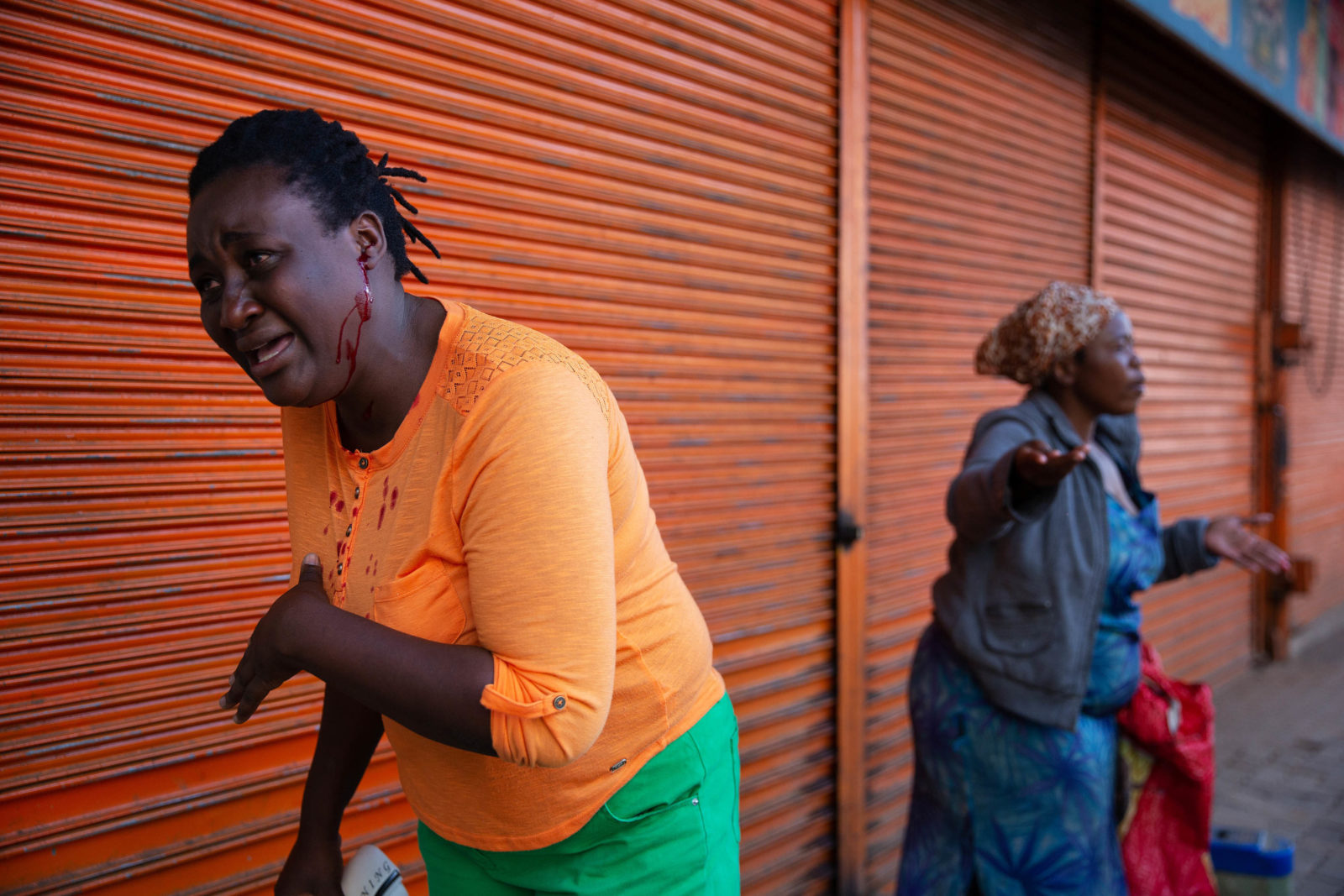 7 August 2019: Primrose Mupfeki, from Zimbabwe, was shot on the ear by a police rubber bullet. South African Police Services carried out a large operation in the Johannesburg city centre to "reassert the authority of the State" after conflict with migrant traders. Many migrants were arrested and their goods confiscated. The operation was followed by looting and attacks by South African mobs, singing anti-migrant songs in the CBD. Picture: James Oatway

A group of men armed with crude weapons made their way through the inner city, breaking and looting, in the wake of police raids in which refugees and other migrants were rounded up and their goods confiscated at gunpoint.

Sizobabamba ngezandla uhulumeni usiphoxelani (We’ll get our hands on them. Why has the government failed/disappointed us),” sang a group of men in isiZulu as they marched down Margaret Mcingana Street in Jeppestown, Johannesburg, on the afternoon of Wednesday 7 August.

Armed with knives, hammers, scissors, knobkerries and pieces of wood picked up along the way, the mob had gone to the Wolhuter Men’s Hostel to mobilise more support. Their message was clear: “We are going to go deal with these foreigners.”

One of the men in the group, carrying a stick, said: “The foreigners, they kill our police. They must go.” Another man, encouraged by his comments, added: “We are going to go remove the Nigerians and take their stuff.”

The mob had formed earlier near the Noord Taxi Rank and Fashion District in the central business district of Joburg and made its way towards Jeppestown. Along the way, they smashed the windows of shops and cars believed to belong to migrants and robbed street traders of their goods and food.

As the procession gathered momentum, individuals became more brazen. Some started chasing after anyone they perceived to be a migrant. The rest of the group stood and watched, jeering and banging their crude weapons against shut roller security doors and cars parked on the side of the road.

Marching towards the hostel in Jeppestown, the group of men stormed a supermarket and a small liquor store on Commissioner Street, smashing windows and stealing food, meat and alcohol.

The police were aware of the group, but provincial police spokesperson Brigadier Mathapelo Peters said she was hesitant to link the mob attack and looting to the police operations taking place in the Fashion District. The looters had formed near the cordoned-off area of the police operation.

Peters confirmed that the South African Police Service, the Johannesburg Metropolitan Police Department and other law enforcement agencies were conducting raids earlier in the day in the same area where they were forced to retreat the week before following clashes with shopkeepers and street traders in the inner city.

About the police operation, Peters added: “We will also reassert the authority of the state.”

Peters’ comment followed widespread condemnation from politicians and the police after the violent clashes between law enforcement and mostly migrant shopkeepers and street traders.

At the time, provincial police commissioner Lieutenant-General Elias Mawela condemned the actions and warned “these foreign nationals” that “such lawlessness cannot be allowed to go unpunished”.

Gauteng member of the executive council for community safety Faith Mazibuko also made disparaging and xenophobic comments, warning migrants in the area that the police would carry out further operations.

“We condemn all criminal elements hellbent on undermining the rule of the law in this country and making this country ungovernable. We can’t co-govern with criminals, especially foreign nationals who want to turn our country into a lawless banana republic,” Mazibuko said at the time.

On 7 August, police followed up on their threats. A large police contingent with officers from as far as Lyttleton and Pretoria West in Tshwane and KwaThema on the East Rand, as well as plainclothes officers armed with rifles, descended on the Fashion District.

She claimed that “over 600 undocumented foreign nationals” had been detained and taken in for verification of their immigration status and to determine if they were linked to any crimes.

The police were arresting migrants in large numbers, with one police officer commenting: “Between me and you, the more of these guys we arrest and remove, the better it will be for the country.”

Another officer said: “They are all illegals. They don’t have paperwork. We’ll take them to the police station and it will be sorted out there.”

Columbus Gwatiringa, a migrant from Zimbabwe, was one of those detained and forced into the back of a police van with other detained people. Gwatiringa’s passport and residence permit were locked up in a shop that closed when the raids began. The owner fled and Gwatiringa was unable to get hold of him to retrieve his passport.

The police officers arresting Gwatiringa refused to listen to his pleas as he tried to explain that his documents were locked up in a shop metres from where they were standing. Gwatiringa was not alone in being arrested, despite having a permit.

A number of Bangladeshi asylum seekers were already in the van. Rakibul Islam, an asylum seeker from Bangladesh, pleaded with the police officers who had detained them.

“What have I done?” he asked, his valid asylum permit in hand. More than six hours after his arrest on Wednesday, he was still being detained and communicating by WhatsApp from the Johannesburg Central Police Station.

Islam said he didn’t understand why he had been arrested and insisted that “we respect police officers”.

One officer at the scene where Islam and other men were detained earlier in the day said they didn’t have the training or the capacity to determine if permits were legitimate or not. He said they were rounding up everyone and taking them to the Johannesburg Central Police Station, where immigration officers were waiting to process the “arrested illegal immigrants”.

Another police officer boasted how they had already filled four vans with people.

‘Not in accordance with the law’

The police claimed that the goods that they confiscated were counterfeit and firearms unlicensed. But Tadesse Yemane, a trader speaking on behalf of Ethiopian street traders in the area, said the police were not acting in accordance with the law.

“This operation is not an operation about counterfeit goods. What we can see is that it is business destruction. They are taking and breaking almost all the shops there. I don’t know the extent of the damage there,” he said.

Yemane said migrants who had been confronted by the police last week and again on 7 August were already living in fear after a group of South Africans had attacked them a day earlier.

“There are also these people who are grouping themselves, going around and breaking legitimate businesses. The police are doing nothing about it,” he said.

“Even now, after the police have left, we are going to be more vulnerable to them. They are going to mobilise and loot and vandalise our shops.”

CCTV footage from the afternoon of Tuesday 6 August shows a group of men with weapons including sticks and pangas attacking shopkeepers in the same area.

“We feel uncertain, we feel unsafe. We feel like there is no hope for us. It just reminds us of the double standards and that we are not truly emancipated. We are very afraid. We feel very uncertain,” said Yemane.

“Up to now they have been detained and no charge. This is absurd,” he said.

“The operation in Jeppe [Street] and Delvers [Street] today was just an unnecessary show of power to create a scene,” Sibanda said.

“It was an assault on the rights of migrants and we are to assess what exactly happened. If the shops were broken into and people with documents also rounded up, this will be beyond comprehension because the government cannot act in such a manner and expect citizens to be non-xenophobic.”

Sibanda described political leaders as “dangerously xenophobic” and blamed them for the impunity with which law enforcement conducted the raids, as well as the formation of a mob that had attacked people elsewhere in the CBD.

As this mob moved back towards the Fashion District, where the raids were being conducted, they sang: “Elethu ilizwe, owani umbango (The nation is ours, what’s the strife?)”

Gauteng police spokesperson Captain Mavela Masondo estimated that the mob had grown to around 200 people at this point as they started attacking people on the side of the streets and smashing windows.

The mob looted goods where they could, including from cars that had been packed with merchandise. While this was taking place, two law enforcement officials leaned against their vehicle and watched as the crowd destroyed property, stole goods and chased after people.

It was only minutes later that a group of police officers who had been around the block came running at the group, shooting rubber bullets and throwing stun grenades to disperse the crowd.

“I am informed that over 30 suspects/illegal foreigner national were arrested,” he wrote on Facebook. “Well done to all involved, we will restore law and order in Johannesburg.”

A joint statement from the offices of Police Minister Bheki Cele, the Gauteng police commissioner and Gauteng Premier David Makhura confirmed that seven police officers were also arrested, including two members of the Tactical Response Team accused of leaking information about the planned operation.

A warrant officer and four constables were arrested at the Johannesburg Central Police Station after they were caught attempting to sell confiscated goods back to the street traders. Peters said all seven officers had been charged with corruption and defeating the ends of justice.

Makhura said: “As South Africans, we must work collectively to build our economy and create much-needed jobs. We need to make a significant dent in the illegal trade of counterfeit goods as they pose an economic risk against our efforts as a country.”

Cele praised the SAPS for its work and warned that “we will continue to stamp the authority of the state.

“We cannot have parallel governance with criminals, therefore we will continue to squeeze the space for criminals to zero regardless of race, gender or nationality.” DM