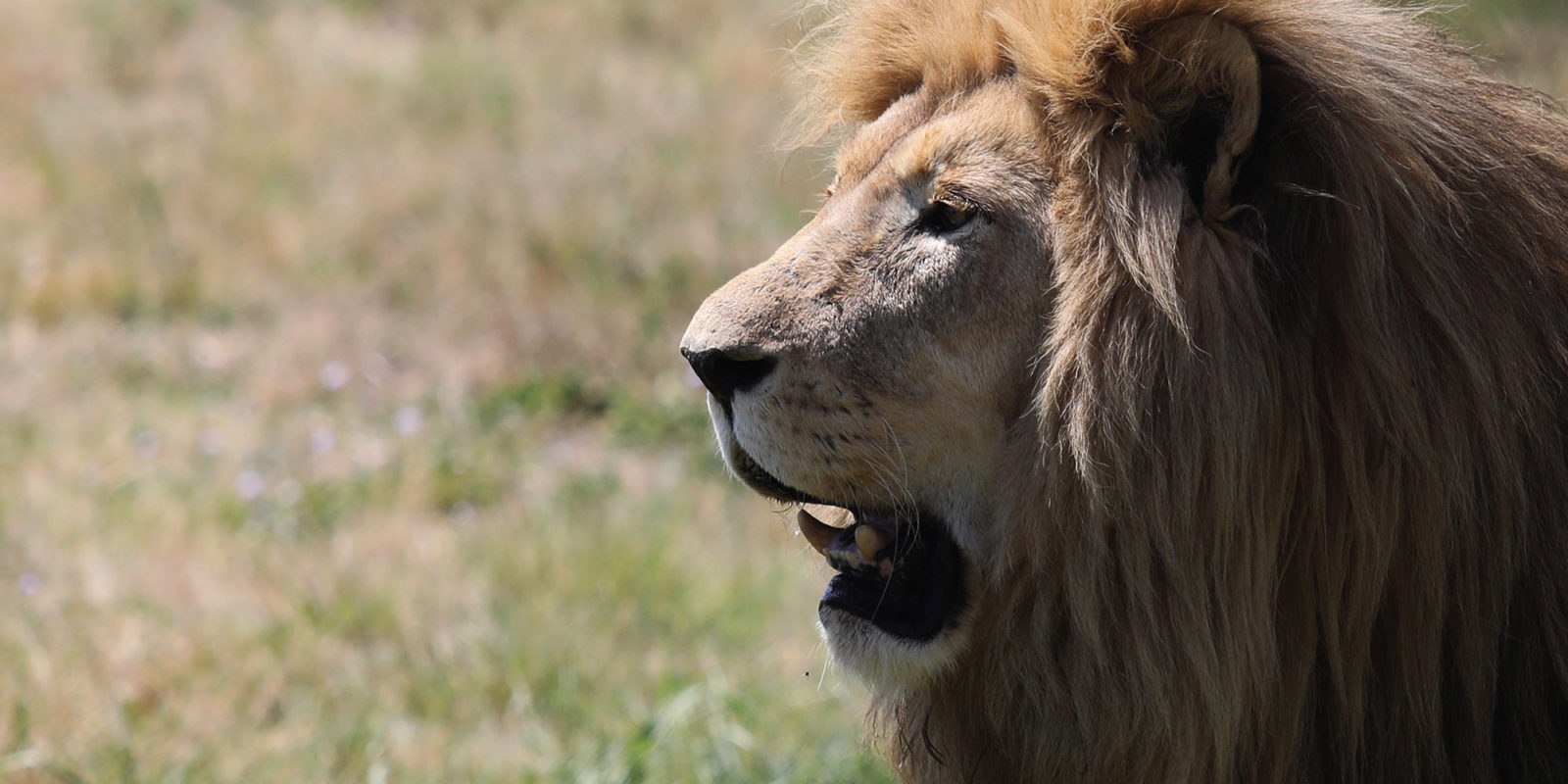 Welfare problems have always characterised the captive lion industry, but have proliferated over the past few years due to a shift in the market as lion breeders actively promote lion bone exports.

The government is now legally obliged to consider animal welfare in all its wildlife conservation decisions. This is the message from the judgment handed down on 6 August by the Gauteng High Court which determined that South Africa’s 2017 and 2018 lion export skeleton quotas were unlawful and constitutionally invalid, although the exports under those quotas have already been made. The judgment strongly rejects the view that “adaptive management” of wild animals can arbitrarily be divorced from ethics.

The National Council of Societies for the Prevention of Cruelty to Animals (NSPCA) was the applicant, and the respondents were the Minister of Environmental Affairs and the South African Predators Association (SAPA). The NSPCA objected to the way in which the quota had initially been determined as it ignored welfare considerations.

In November 2018, a report adopted by the National Assembly called for the termination of the country’s predator breeding industry, requiring a review of current legislation with a view to ending the industry. The then minister of environmental affairs strangely sidestepped this resolution, calling instead for the formation of a high-level panel to “review policies, legislation and practices on matters of lion… management, breeding, hunting, trade and handling”.

Judge Jody Kollapen noted that the way in which the 2017 and 2018 quotas were set had ongoing implications for how conservation decisions were taken.

He ruled that the treatment of lions in captivity was an environmental issue and its relationship with the commercial activities that arise from its operations (lion bone exports) was “inextricably linked to the constitutional issue of what may constitute the elements of the right to an environment and the right to have it protected for the benefit of this and future generations that Section 24 of the Constitution articulates”.

Kollapen referenced the 2016 judgment in the NSPCA case against the Minister of Justice and Constitutional Development, which stated that “the rationale behind protecting animal welfare has shifted from merely safeguarding the moral status of humans to placing intrinsic value on animals as individuals”.

In this respect, the canned hunting of lions was unanimously seen as “abhorrent and repulsive” due to the animals’ suffering. Given the integrative nature of welfare and conservation, Judge Kollapen ruled that while the minister may technically be right that the welfare mandate for lions in captivity resides substantially with the Department of Agriculture, this was different to the obligation to consider welfare issues in conservation decisions. The latter resides in the minister of the environment, especially as lions in captivity constitute part of the country’s biodiversity challenge.

The judge further noted that it was “inconceivable that the State Respondents could have ignored welfare considerations of lions in captivity in setting the annual export quota”. It was “illogical, irrational and against the spirit of Section 24 and how our courts have included animal welfare concerns in the interpretation of Section 24” to signal that South Africa endorses a legal lion bone trade, but ignores the conditions under which lions are kept. He, therefore, declared that the decision to enact a quota in 2017 and 2018 was “unlawful and unconstitutional”.

This clearly has implications for whether the environment minister can set a new quota until a process for addressing welfare considerations is established. Sarah Kvalsig of Cullinan and Associates, an environmental law firm, notes that the Department of Environment, Forestry and Fisheries “must now consider welfare as part of the basis for its decisions rather than treating it as incidental to those decisions”.

Pivotal as the judgment is, it does not stop the captive breeding of lions nor the setting of future export quotas but places the onus on the department to take the animals’ welfare into consideration when making decisions concerning them.

Welfare problems have always characterised the industry, but have proliferated over the past few years due to a shift in the market as lion breeders actively promote lion bone exports. Typically, predator breeders would rent or sell cubs to interaction tourism facilities. To increase production, cubs are ripped from their mothers a few hours after birth to force lionesses into early oestrus. At interaction facilities, either members of the gullible public or volunteer tourists pay to pet, feed and cuddle the cubs.

Research conducted in 2018 reveals that at least 80 of these facilities operate for public entertainment. Once cubs have outlived their petting usefulness, they become “walking” lions. Thereafter, they are either sold into the canned hunting industry, where hunters pay upwards of $5,000 to shoot a lion in a fenced enclosure, or directly into the Asian bone trade, where lion parts now masquerade as tiger parts.

Since the US imposed an import ban on captive-origin trophies in 2016, many breeders have switched to bypassing interaction and hunting altogether, as the bone trade is growing steadily more lucrative. In the past, breeders had a superficial incentive to pay attention to welfare as hunters wanted prime trophies.

The supply-side economics argument justifying an annual export skeleton quota is as follows: Captive predator breeding in South Africa maintains a steady supply to the Asian bone market. Any price shock through terminating the industry or applying an overly restrictive quota will result in increased poaching of wild lions. Bans tend to drive markets further underground, risking the emergence of a parallel illegal market impossible to control.

These are the “scientific” grounds on which the late minister Edna Molewa justified the establishment of an annual quota in 2017. The minister also ignored the fact that captive lion numbers had grown to feed a demand that had not previously existed, abetted by the Department of Environmental Affairs.

Despite a motion by the International Union for the Conservation of Nature (IUCN) that called for the termination of the captive predator breeding industry, a meeting of the Convention on International Trade in Endangered Species (CITES) in 2016 allowed South Africa to establish a quota. The decision to do so immediately thereafter was couched in terms of “adaptive management” that sought to neither throttle nor expand supply so as to avoid disruption to the status quo. No strong evidence at the time suggested that captive breeding was detrimental to wild lion survival in South Africa.

Judge Kollapen wrote that while this conclusion appears to be unassailable, “there appears to be some controversy as to whether the means used to achieve such an outcome – the targeting of captive lions – is beyond reproach.”

A truly scientific approach by the government would have weighed all the evidence and assessed what kind of impact a legal quota might have on the survival probability of lions in the wild, not only in South Africa. Conducting research that only took into consideration the interests of those involved in the captive predator breeding industry was likely to be biased towards establishing policy positions that protected vested interests at the potential expense of wild lion conservation.

The pro-trade argument also assumes that a legal trade in lion bones will fetch exactly the right price to incentivise sufficient breeding, but somehow simultaneously disincentivise poaching. This ignores the science that shows that it will always be less expensive to poach a wild animal than to breed it responsibly. The idea that a legal and regulated market will crowd out illegal supply is therefore fanciful. The government’s view also assumes, despite significant evidence to the contrary, that no illegality in the lion bone trade currently exists.

Furthermore, legal lion bone supply undermines efforts in Asia to ban the purchase of tiger products. Laws have an impact on norms that determine consumer preferences, creating a stigma effect that complements demand-reduction efforts. South Africa’s continuation of a legal trade in lion bones erodes the efficacy of the stigma effect and sends confusing signals to the market. Arguments defending the industry also typically ignore the opportunity costs and negative externalities associated with it, such as the reputational brand damage to South African tourism. The Department of Environment, Forestry and Fisheries also appears to have forgotten a statement made to the Parliamentary Committee on Environmental Affairs that only lion breeding facilities which could show conservation benefits would be approved.

Wild lions are under severe threat, having disappeared from 94% of their historic range. There are only half as many as there were 25 years ago, with fewer than 25,000 estimated. Poaching is one of the primary threats and is increasing to satisfy the growing demand for skin, teeth, paws, claws and bones.

The existence of a captive predator-breeding industry may have a detrimental effect on wild lion survival, especially if it shifts demand for derivative parts well beyond the legal market’s ability to supply. The contention that there is no proof that poaching is increasing because of captive breeding reflects a fallacy that absence of evidence equates to evidence of absence. That South African wild lions have not seen a significant uptick in poaching does not mean that there has not been increased poaching in other range states. Conservation decisions cannot be taken in a vacuum, as if trading in captive-origin bones from South Africa has no impact on wild lion poaching in places such as Mozambique.

The NSPCA’s Karen Trendler rightly noted in her organisation’s victory that this “precedent-setting judgment” declares that “one cannot simply use, abuse and trade wildlife without considering their welfare and well-being”.

Judge Kollapen has gifted South Africa with legal clarity regarding the unlawfulness of the establishment of the 2017 and 2018 quotas. He has also reminded us that the captive lion industry is abhorrent and repulsive, so it remains to be seen how the Department of Environment, Forestry and Fisheries will take this into account in determining future quotas. DM