Malema: Journalists must not be ‘crybabies’ 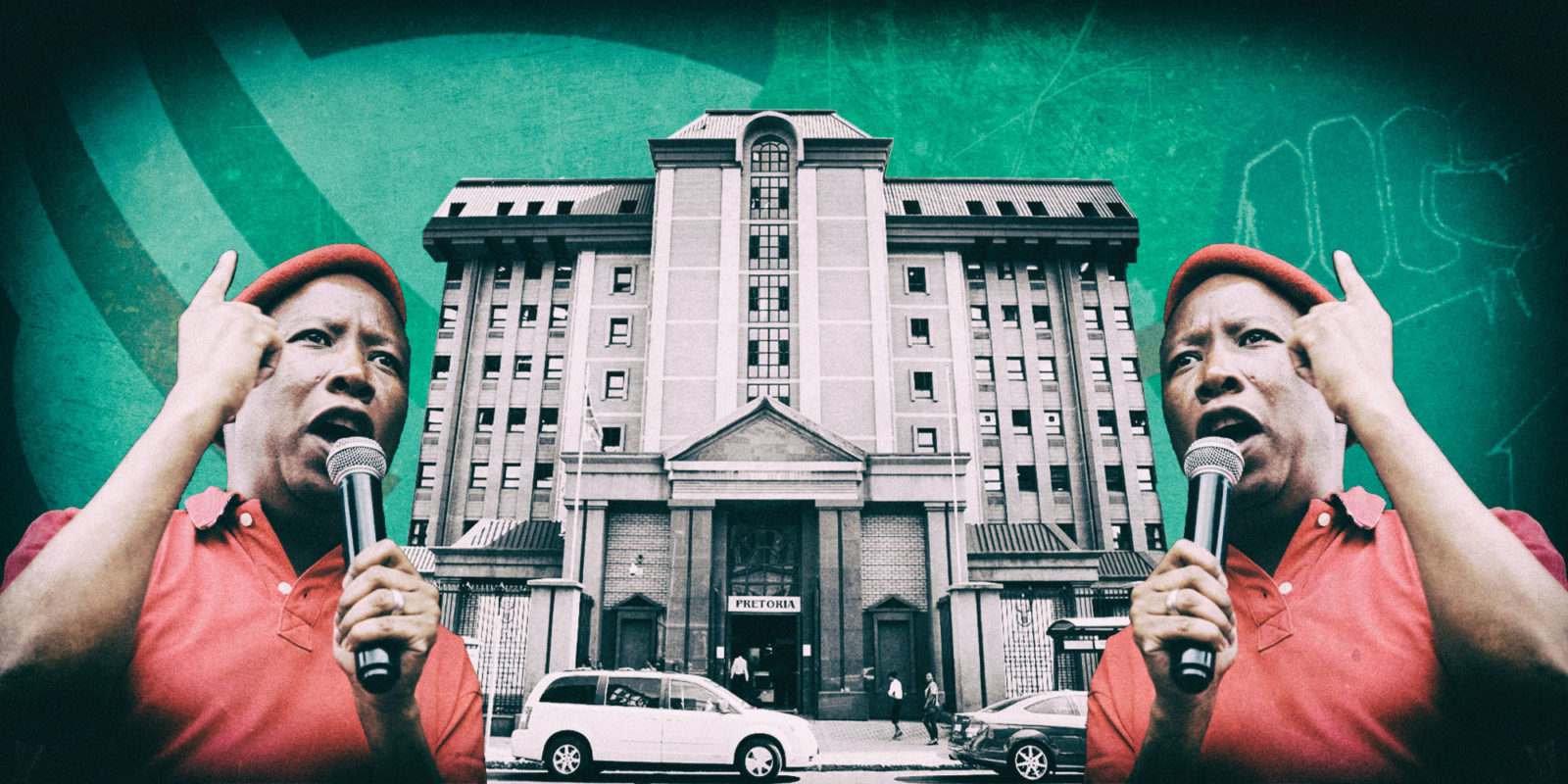 Judgment was reserved on Tuesday in the case between the SA National Editors Forum and the EFF. While the forum and journalists continued to call for the party to be held accountable for intimidating the media, EFF leader Julius Malema showed no signs of backing down.

EFF leader Julius Malema continued to defend his criticism of the media on Tuesday 6 August, claiming that the SA National Editors Forum (Sanef) was trying to limit political speech and journalists must not be “crybabies” when attacked on social media.

Malema was speaking after two days of hearings in the Pretoria Equality Court where Sanef and five journalists were seeking to interdict the EFF from intimidating the press and endorsing those who attack journalists in the party’s name.

“Where we see clear hate particularly from recognisable members of the EFF and leaders we condemn it and we call them to order,” said Malema, who also accused the media of trying to bring the EFF down due to foreign financial interests in the sector.

Sanef and the five journalists – Adriaan Basson from News24, Barry Bateman from Eyewitness News, Max du Preez from Vrye Weekblad, Pauli van Wyk from Daily Maverick, and Ranjeni Munusamy from Tiso Blackstar – have accused the EFF of targeting them with hate speech and harassment.

Advocate Tebogo Manchu, representing Sanef and the journalists, on Tuesday said Malema’s November 2018 call to “cut the head” of enemies in the media must be considered hate speech as there was an intention to harm or propagate hatred and Malema did not explain what the supposed metaphor was intended to otherwise mean.

That comment, delivered to supporters outside the State Capture Commission of Inquiry, set off an ongoing stream of violent and threatening comments directed at the journalists on social media. The journalists told the court about the consequences the comment had on their personal safety and well-being, with one journalist reporting being harassed and intimidated in a supermarket.

Advocate Tembeka Ngcukaitobi for the EFF said Malema may have insulted and offended the journalists but had not committed hate speech or harassment.

Malema later chipped in: “How can you say ‘cut the head off’ is intimidation or hate speech or anything of that sort when government speaks every day and says we declare war against poverty? Have you ever seen ministers carrying AK-47s since war is declared against poverty?”

The EFF defended other comments from leaders, such as a tweet from Malema to Van Wyk telling her: “You’re sick. Go to hell satan”, as political commentary rather than hate speech or harassment.

The journalists have attested how they are threatened and insulted online by perceived EFF supporters, in a manner similar to what Ferial Haffajee has described in Daily Maverick. The case may depend on whether EFF leaders are seen to be liable for promoting or endorsing supporters’ attacks.

“What is wrong is the scapegoating of the EFF. What did the EFF actually do?” asked Ngcukaitobi, claiming the party could not be held accountable for what faceless third parties do online.

“We are equally appalled by the conduct of the trolls,” claimed Ngcukaitobi, “but those trolls are clearly abusing the EFF.”

Manchu said Sanef was not trying to vicariously hold the EFF liable for the invective, but had taken the party to court because it caused the abuse.

Malema had retweeted a comment calling for a “list of Stratcom journalists’ home addresses” but in his statement to the court he said “a retweet is not an endorsement”.

“The mere fact that the EFF refuses to condemn someone who is acting crazy does not mean the EFF is committing hate speech,” said the advocate.

The EFF argued that journalists should not be considered a group under the Equality Act that hate speech can be committed against. Sanef called for the court to protect the media from attacks aimed at intimidating journalists from reporting critically.

In its court papers, Media Monitoring Africa, which was admitted to the case, called on the court to take steps to protect the safety and independence of journalists.

“Once the intimidation, harassment and victimisation of the journalists occurs, the social harm follows – that a responsible and effective member of society is no longer able to depend on the media to carry out their constitutional mandate in imparting information and ideas in an ethical and critical manner,” submitted the organisation, which aims to promote ethical and fair journalism.