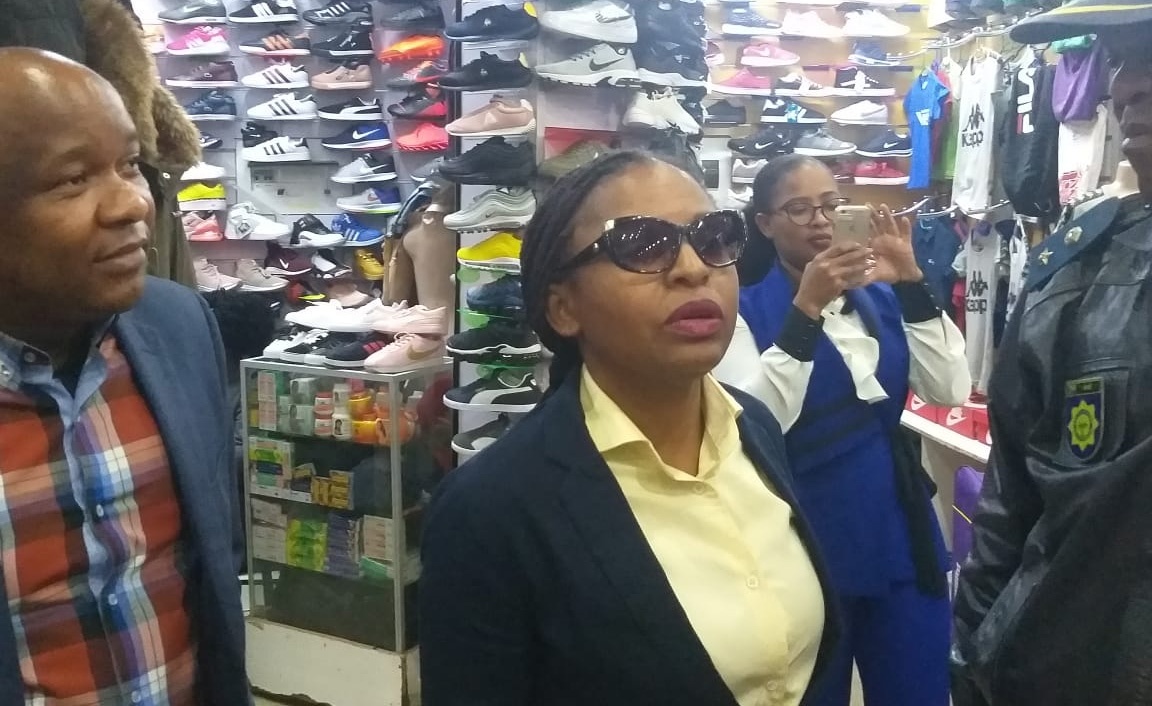 Careful not to ruffle any feathers around the hot issue of xenophobia, Minister of Small Business Development Khumbudzo Ntshavheni has warned that the confrontation with police by informal traders in the Johannesburg Central Business District last week should not be used to ignite xenophobic tensions.

“We don’t have evidence of who was involved and we should not speculate about people’s nationalities. Let’s not go into that debate.”

Nsthavheni said counterfeit goods were smuggled across borders, and tackling this required co-operation with other countries. She said there were also manufacturers in Johannesburg, and that Johannesburg police intelligence had identified the manufacturers.

“They just need to go and act,” said Ntshavheni.

She warned against politicising the matter, calling on Johannesburg mayor Herman Mashaba to focus on doing his job. She said government was working on an intervention plan to address porous borders:

“The discussion about porous borders can happen after we have taken accountability for what is happening now.”

Ntshavheni said Mashaba has a responsibility to enforce city by-laws.

Minister Ntshavheni was accompanied by her Acting Director-General Lindokuhle Mkhumane, spokesperson Priscilla Monama and Johannesburg Central Police Station commander Irvin Perumal and said the government was looking at regulating informal trading. She said her visit was about finding out what had happened last week:

“We have to make sure all activities are legal.”

According to the minister, the country has lost R350-million because of counterfeit goods in the last eight months in Johannesburg alone.

She also called for stricter regulation of formal trading in the city, adding that part of the reason for her visit was to assess what could be done to address the turmoil in the Johannesburg CBD.

“We want to establish what are the things that we can attempt to do,” she said.

Ntshavheni said police had not yet made any arrests. She said she was aware of the foreign nationals who were in the media to speak about the violence. She said people trading in the Johannesburg CBD have to be eligible to do so.

Eligibility entails that they must legally be in the country and also that they must qualify to be granted operation licences. She said the police were not on a mission to chase away foreign nationals:

“They were there to confiscate counterfeit goods, let us remove the nationality of the individuals.”

She suggested that South Africa consider the examples of countries like Zimbabwe and Nigeria where there are restrictions regarding the kind of jobs foreign nationals can do.

“In Zimbabwe, for example, no foreign nationals are allowed to open salons and barber shops. These are reserved for locals,” said Ntshavheni.

“We need to quantify their contribution and act accordingly,” she said.

Addressing claims that some police officers were involved in corruption during the confiscation of goods, Ntshaveni responded:

“We do not want people to make wild allegations about our police officers. They must produce proof.”

Lack of transparency has always been a concern for informal traders. Asked what happened to the confiscated goods, Johannesburg Central Station Commander Irvin Perumal said the goods are kept as exhibits.

Perumal said detailed records are kept at the police station:

“An investigation is done, and if the owner of the goods is exonerated, the goods are returned.”

Minister Ntshavheni said those who feel they have a case against the police should approach the Independent Police Investigative Directorate (IPID) and open cases against those officers.

“We will not allow our police image to be dented by unfounded claims,” said Ntshavheni.

She added that they would have a discussion about what laws should be enforced and work with the South African Local Government Association (SALGA) to find ways to prevent the goods entering the country.

Visibly terrified informal traders watched the minister move from shop to shop. Most of the shops the minister visited were owned by Ethiopian nationals.

Some started to close their shops, thinking the police were back to confiscate goods.

The attacks on the police by the informal traders drew harsh criticism from various provincial departments, including the office of Premier David Makhura who labelled the incident a crime against the state.

The South African Human Rights Commission condemned the attacks. It is not yet clear what came out of Police Minister Bheki Cele and Premier Makhura’s meeting during which they assessed the situation in the CBD.

“Every country has laws, South Africa is no different. We cannot allow people to do as they please. We want what is in the best interests of the public,” said Ntshavheni. DM