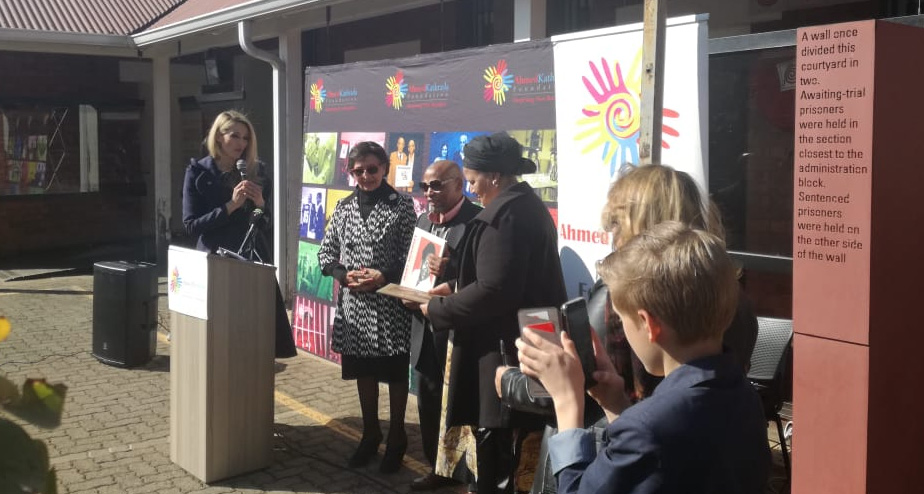 Sophie Williams-De Bruyn, Lionel Jacob Moodley, and Elinor Sisulu pose with the two publications that detail the political journeys of Albertina Sisulu and Mary Moodley at the 'Remembering Women of Fortitude' event held at the Women's Prison in Constitution Hill on Sunday, 4 August. Photo: Lelethu Tonisi

The Ahmed Kathrada Foundation kicked off Women’s Month on Sunday at Constitution Hill by honouring the lives of activists and Struggle heroines Albertina Sisulu and Mary Moodley.

Executive Director of the Ahmed Kathrada Foundation Neeshan Balton launched Women’s Month on Sunday. “It’s a day in which we pay homage, we pay our respects, we remember their contributions and… find ways of committing to taking forward their own values and visions into contemporary South Africa and the struggles which link to our past,” he said.

The “Remembering Women of Fortitude” event told their stories and followed the journeys of several other woman icons of the anti-apartheid struggle.

Ma Sisulu played a pivotal role in the Struggle which continues to inspire young activists today in continuing the work of ensuring women’s voices and purpose are realised. Under the apartheid regime, she was responsible for organising women through the Federation of South African Women (Fedsaw) and the ANC Youth League. Ma Sisulu also worked with and helped mould a new generation of anti-apartheid activists.

Speaking on behalf of her mother-in-law, writer and activist Elinor Sisulu affirmed the need to preserve South African history, saying that it was slowly being lost and that in some cases, facts were distorted. She blamed sections of the ANC for fuelling this distortion and that “it is a very dangerous moment and we need a political response”.

“We must present young people with history and have an intergenerational transfer of knowledge. Our young people could also be employed through research that is more grounded in content, that brings more substance and not just the images of the 20,000 women (who marched on the Union Buildings on 9 August 1956), but actually telling the stories of those 20,000 women,” she said.

Mama Mary Moodley, also known as Aunty Mary, was a caregiver and churchgoer who provided sanctuary for the homeless, both black and white, in her two-bedroom shack that she shared with the rest of her family. A member of the ANC and a trade union organiser on the East Rand, she was served with a five-year banning order which was extended, and was detained under the apartheid 90-Days Act. She was one of the pioneering organisers of Federation of South African Women and an organiser with the South African Congress of Trade Unions (SACTU).

“She was a constant menace to the apartheid regime; her whole family were involved,” she said.

She said that she learnt from Aunty Mary who “was gentle, sensitive, kind, and put the needs of others before hers. She showed her passion when she spoke and put tears in our eyes,” she said.

Former minister of finance Trevor Manuel said people needed to understand not just the events of 9 August 1956, but more importantly the fact that they were part of a process – a great mobilisation.

“You’ve got to understand it in the context of the Defiance Campaign of 1952 which itself is the reflection of the changes in the Youth League in 1949, the campaign for the Congress of the People and the Women’s March and how segments of society came together and mobilised. They did so in circumstances where this was all based in sacrifice and a vision — our generation are the beneficiaries of that vision.

“While we have some of those who were directly involved in these processes alive to tell the stories, that is what must shape the general consciousness,” Manuel said. DM