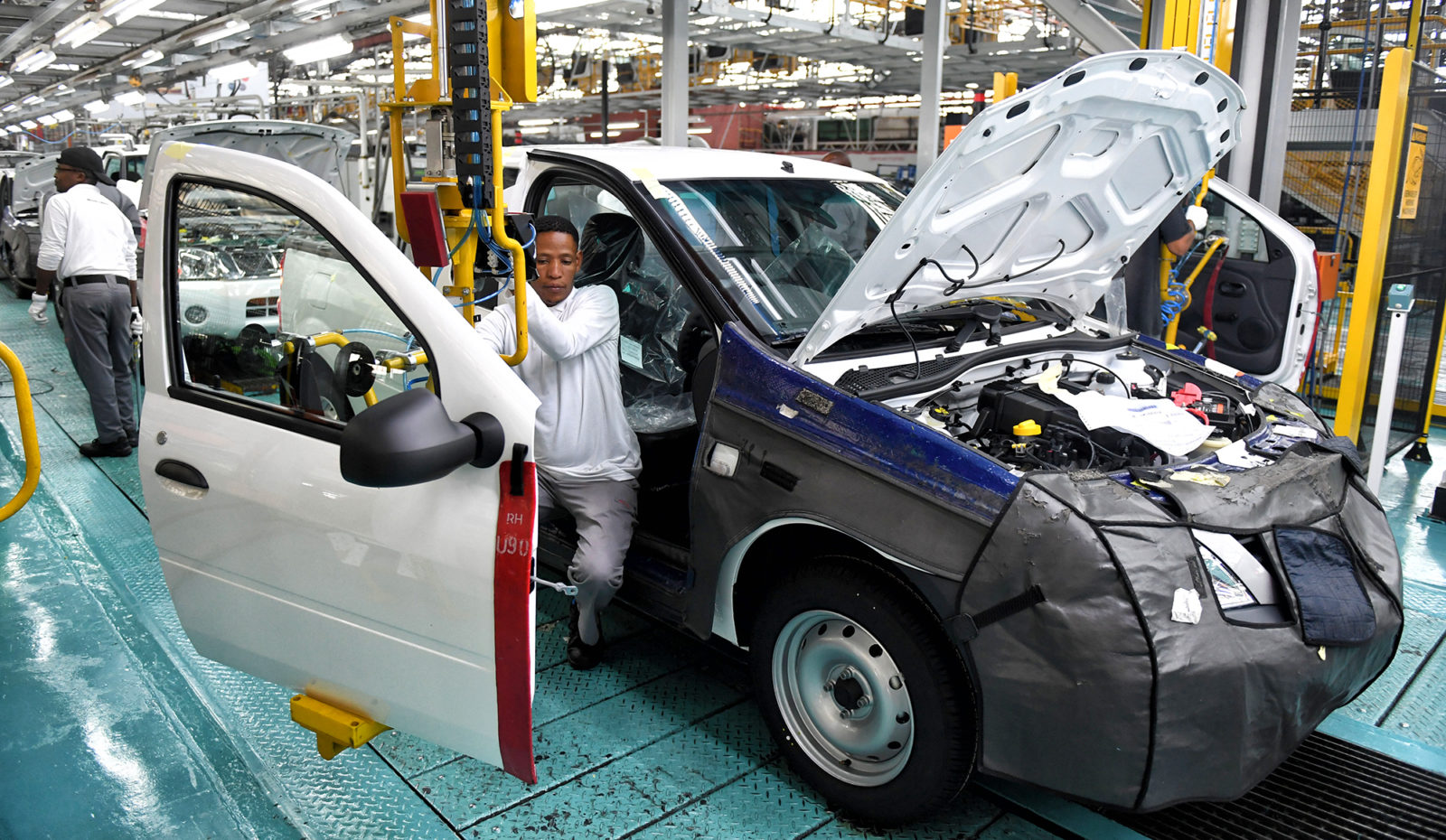 Workers in the Nissan factory in Rosslyn assemble cars during a visit by President Cyril Ramaphosa. (Photo: Deaan Vivier / Netwerk24)

The next century will be very different from the last, and any manufacturer looking to stay ahead must innovate in order to keep the wheels turning. There are lessons in this for South Africa, too, given its big bet on car manufacturing. Will we adapt or break down?

Technology is shaping the future of mobility, from electric vehicles to autonomous cars and e-hailing services, which eliminate the need for a car completely. A visit to leading car and motorcycle manufacturers in China and Japan reveals a century of crisis, learning, adaptation and reinvention.

The entrance to the Toyota Commemorative Museum of Industry and Technology in Nagoya, Japan, has a large circular loom in the entrance. The mammoth machine was invented by Sakichi Toyoda, whose fortune seeded the Toyota empire. His Type G loom was sold to Platt Bros & Co Ltd Oldham in 1929 for £100,000. Not only did the Type G permit non-stop shuttle changing, but its system automatically shut down the loom if a warp thread snapped.

An illustration of Japanese focus on incremental but continuous improvement, or Kaizen, Toyoda’s design increased productivity, as workers were freed from monitoring looms, being able to operate up to 30 machines per worker. Once the world’s largest textile manufacturer, with more than 15,000 workers in 1913, Platt went out of business in 1982 faced with the closure of Lancashire cotton mills and tough competition in foreign markets.

Not forgetting their roots, however, half the Toyota museum is dedicated to the evolution of Japan’s cotton industry, and Toyoda’s role in it. Still, today, Toyota industries produces hi-tech looms. The difference is that it is less than 1% of its business for a company which produced 8.8 million vehicles in 2018.

Mazda has its headquarters in Hiroshima’s Aki District. Started in 1920 as the Toyo Cork Kogyo Company manufacturing machine tools, it branched out into three-wheel auto-rickshaws in 1931, before diverting into rifle production during the World War II. Its founder, Jujiro Matsuda, celebrated his 70th birthday on 6 August 1945, the day the atomic bomb was dropped on the city. Despite losing many workers in the devastation, Mazda was able to restart production just four months later.

Mazda is now the 15th-largest car maker globally, producing 1.6 million vehicles in 2019. Like other Japanese car manufacturers, it has leant heavily on foreign innovations, famously attracted to the German Wankel rotary engine, first using it in 1967 in its Cosmo sports car.

Unusually, however, Mazda has accommodated foreign partners not only in technology sharing but also management based on its long-term tie-up with Ford. It wasn’t afraid to abandon the rotary engine in 2012 when it could not get the emissions and economy standards to contemporary expectations. Yet today it is pushing, once more, the technological envelope with its production techniques and its Skyactiv engine systems. Operating at the peak, the Hiroshima plant assembles a car every 30 seconds.

It’s a business not without its twists and turns.

The coastal city of Hamamatsu, 260km west of Tokyo, is the motorcycling equivalent of Silicon Valley, the birthplace of Yamaha, Suzuki and Honda.

From very humble beginnings Suzuki has grown to be the world’s 10th-largest car and sixth-largest motorcycle manufacturer. One in every two cars sold in India in 2018 was a Suzuki.

Michio Suzuki founded the Suzuki Loom Works in Hamamatsu in 1909. His business took off with the invention and export of a new automated weaver 20 years later. Intent on diversifying, Suzuki started a small car project in 1937, the same time as Honda set up his piston ring manufacturing operation in a small garage. Suzuki’s motoring plans were halted by the war, after which the company returned to producing looms. Faced with the collapse of the cotton market in the early 1950s, Suzuki restarted his transport project, building, like Honda did at its start, a “clip-on” small engine to power bicycles in 1954 in meeting a dearth of post-war motorised transport.

It grew quickly. In 1955, Suzuki produced 9,000 motorcycles, changing its name to the Suzuki Motor Co. Ltd. By 1960, however, it was churning out 155,000, nearly the annual output of the entire British motorcycle industry.

For the first half of the 20th century, Britannia had ruled the motorcycle world. BSA, the biggest industry name of all, had been founded in 1891 as a consortium of Birmingham-based arms manufacturers. In its pomp, it claimed “one in four” motorcycles worldwide was a BSA. When British motorcycle production peaked in 1954 at 187,000 units, the industry was the country’s third-largest source of foreign exchange after cars and whisky.

But it lost its way because it failed to move with the times.

By 1974, British motorcycle brands held only 1% of the US market and just 3% of their domestic market. BSA was no more. The consortium of Norton Villiers Triumph was officially dissolved in 1978.

While Japan ascended, led by the likes of Honda, Yamaha (today the world’s second-largest motorcycle producer), Kawasaki and Suzuki, the British motorcycle industry went into terminal decline. A 1975 UK parliamentary study found that Japanese workers weren’t paid less than their British counterparts, but rather that the manufacturing techniques simply were more capital intensive, resulting in increased productivity and better quality.

The story of British decline is thus not one of poor worker skill or inflexibility, but rather one of rigid thinking and unwillingness to adapt like Suzuki, Honda and other Japanese manufacturers.

And the third reason is down to the company’s continued willingness to introduce new technology, just as Michio Suzuki did with his looms. Today Suzuki spends $1.5-billion annually – or nearly 3% of turnover – on research and development, a large share of which is earmarked for electric vehicle technology.

Over the East China Sea in Shanghai, Volkswagen is hoping to position itself as the leader of next-generation mobility, starting with an investment of €15-billion, or one-third of total expenditure, into e-mobility.

“I’ve seen more rapid change in the automotive sector in the last two years, than in the preceding 20 years,” says David Powels, a South African who is now running SVW in Shanghai. The next generation wants mobility, not necessarily a car. And when they buy a car, they buy it for the software as much as for the hardware, is Powels’ take.

The days of the internal combustion engine are numbered, with countries from France to India looking to phase out or completely ban petrol- and diesel-guzzling cars between 2030 and 2040. So far, declining numbers of car sales in America, the UK and Europe, South Africa’s main export markets, have been offset only by sales in China and India. But this won’t continue forever. The relatively slow adoption of electric vehicles so far is no indication of the future either, and many predict a “tech break” or tipping point soon, as with PCs and mobile phones.

Another driver of change is the sharing economy. With traditional cars only being used for 4% of their “life”, the combination of autonomous vehicles and ridesharing technology brings large gains in terms of efficiency and costs.

Failure to acknowledge the disruptive power of technology can be catastrophic. It has ended once blue-chip companies such as Kodak, Nokia and Yahoo. The automotive industry could be next.

Where might this leave South Africa, which has bet on subsidising large car manufacturing operations with billions of rands every year?

It is time for the South African auto industry to shift gear and position itself as a manufacturing industry for the future, not for a dying past. The change must be gradual, starting with incentive packages that reward innovation and adaptation, not just the importing of foreign tech. This is the lesson from Volkswagen in China.

While the Chinese operation was a technology “taker”, assimilating European-sourced R&D until the 1990s, from the 2000s it has increasingly become a tech provider with more than 2,000 staff focused on developing specific local solutions. China is also to become a major centre of VW’s e-mobility project, which will commit more than €44-billion to exploring solutions to digitisation, autonomous vehicles and new power systems by 2023.

To stay ahead, South Africa’s carmakers will also have to increase efficiency and productivity. Unless we can position ours as a mobility sector for the future, we might as well acknowledge its coming end now, and get out. Continuous innovation and change, as Mazda, Toyota and Suzuki in Japan and SVW in China show, provide some guarantees of success. DM

Greg Mills and Emily van der Merwe have been researching a forthcoming book Can Africa be the Next Asia? for the Brenthurst Foundation.