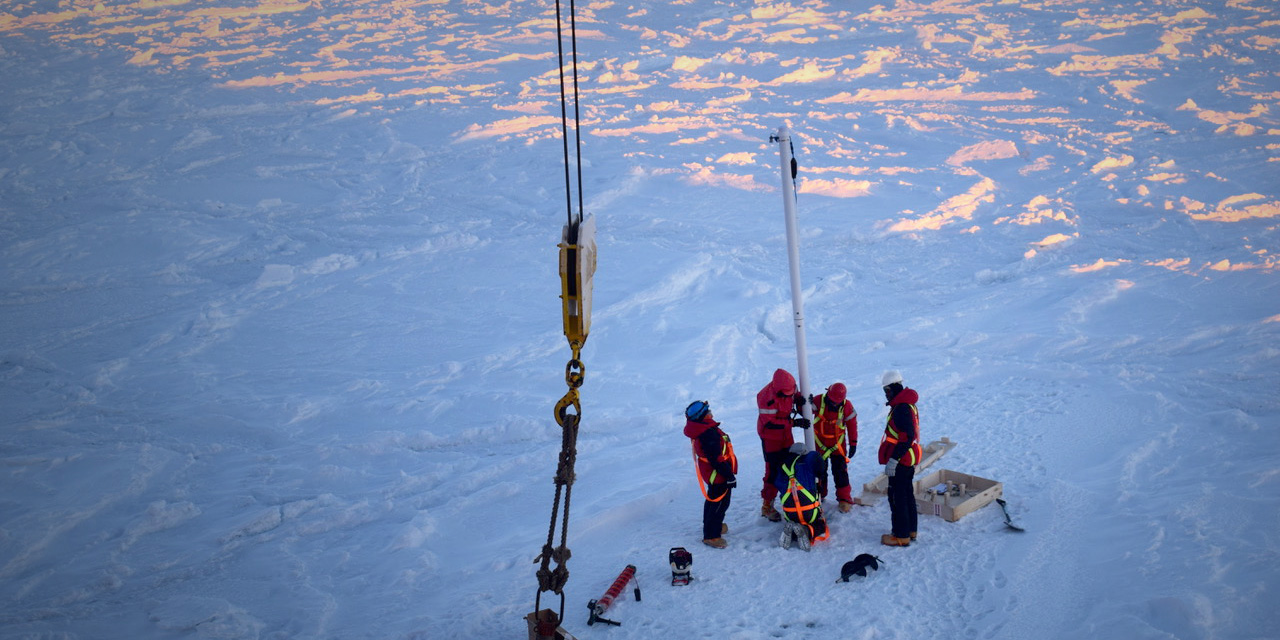 Researchers probe the secrets of sea ice in the Souhern Ocean. (Photo: supplied)

There is a sense of irony when our scientists have to travel to one of the coldest corners of the Earth to get a better handle on why the planet is getting hotter.

Deep down near Antarctica, a 92-strong team of South African scientists aboard the SA Agulhas II has been wrapped up very warmly since leaving Cape Town last month.

Last week, for example, the air temperature was -19 °C, (or nearly -45 °C when combined with the wind chill factor) while travelling through the Roaring Forties and Furious Fifties.

The Agulhas – South Africa’s R1.3-billion state of the art ice-breaking polar research vessel – is on a 21-day, 6,600km long “winter cruise” deep in the Southern Ocean as part of a major international climate change research project known as SCALE.

During the research cruise, the scientists have been gathering and carving up “ice pancakes”, deploying a fleet of undersea robotic gliders and collecting a host of data from the sea and air to help solve some of the complex riddles of the global heating crisis.

Dr Sandy Thomalla, principal scientist of the CSIR’s Southern Ocean Carbon and Climate Observatory (Socco), says this massive ocean has been described as the “climate fly-wheel” of the planet because of its critical role in absorbing both solar heat and growing carbon dioxide emissions

Thomalla, a veteran of more than a dozen Southern Ocean expeditions, says that – despite this ocean’s critical importance in shaping weather and climate patterns – there are still some major “blind spots” in scientific observations because of its remote location and hostile winter weather conditions.

Fortunately, because of our geographical location at the southern tip of Africa and ownership of the SANAE IV research base in Antarctica, South Africa is in a unique position to contribute to global research on climate change.

Thomalla says the global concentration of carbon dioxide (CO2) in the atmosphere has increased by more than 40% over the past century, mainly from burning fossil fuels and large-scale clearing of land through farming and deforestation.

“Current CO2 levels are now higher than at any time in the past 650,000 years… Of the approximately three billion tonnes of CO2 pumped into the atmosphere every year by human activities, about half stays there, warming the planet through the greenhouse effect,” she said.

“The rest is soaked up by natural processes, more-or-less evenly divided between land and oceans. Of the ocean half, by far the biggest portion (50%) is taken up by the Southern Ocean. The Southern Ocean is thus disproportionately more important when it comes to buffering the impacts of climate change through increasing atmospheric CO2 concentrations.”

The current SCALE expedition – which left Cape Town on July 18 and comes to an end on August 12 – is the largest South African research cruise to date.

Apart from more than 90 SA scientists, there is also a large international contingent from 11 nations. Split into 16 specialist teams, their expertise ranges from physics, sea-ice, waves and robotics through to chemistry, phytoplankton and air-sea gas fluxes, meteorology, plastics and birds.

Each team has packed up their land-based laboratories and set them up aboard the floating Agulhas research vessel.

Some of the research involves deploying robotic gliders to monitor underwater carbon dioxide levels, ocean eddies, currents and sea storms – measurements that were almost impossible before glider technology was developed.

Some of the new gliders, controlled via satellite communication, can dive to a maximum depth of 1km below the ocean surface to provide a more complete picture of underwater sea changes.

The team will also be monitoring food webs, phytoplankton, fish, seabirds and the underground movement of heat and carbon. DM