Nicky Newton-King, the woman who rattled cages from atop the capitalist Christmas tree 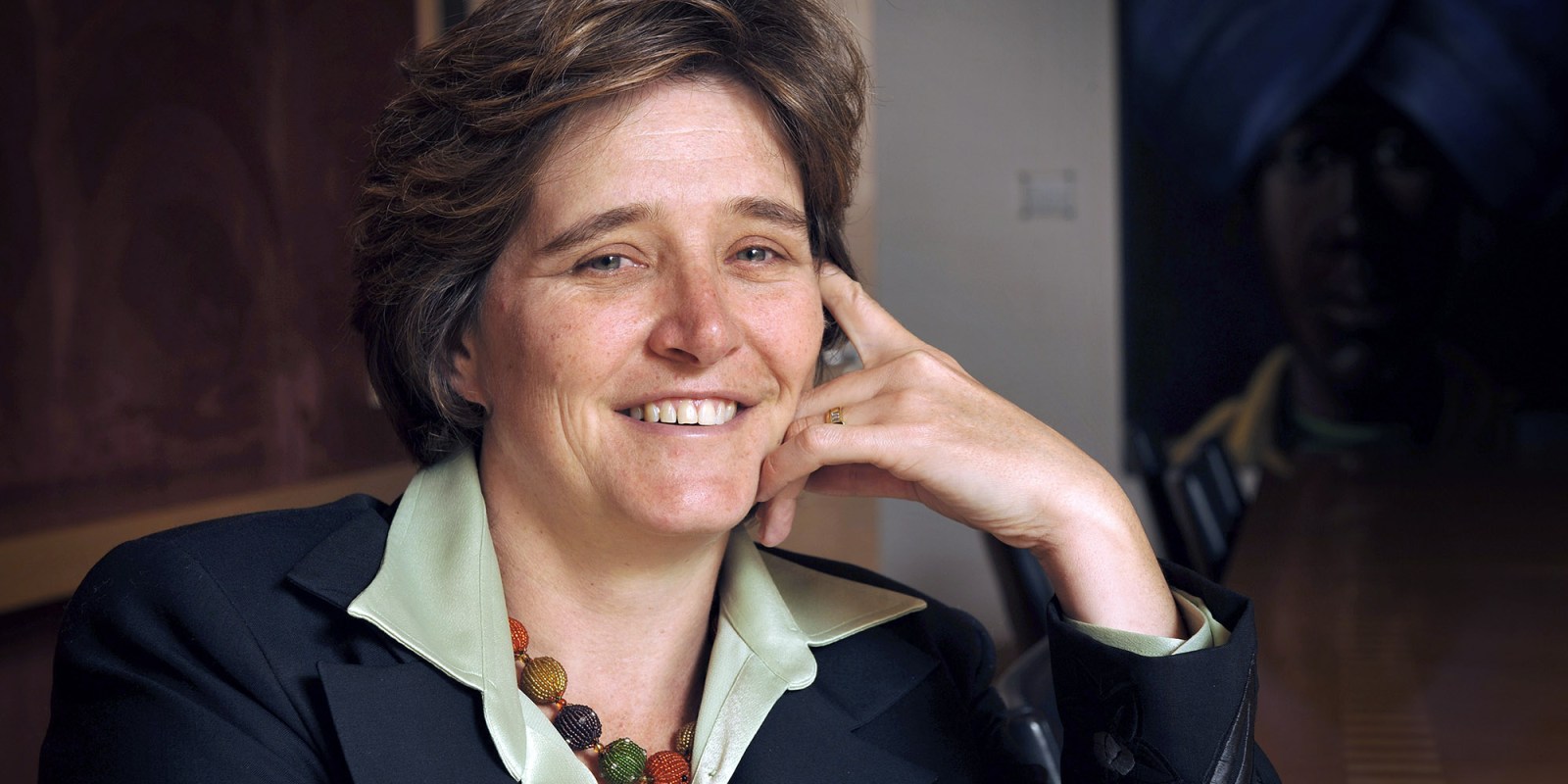 Nicky Newton-King has stepped down as CEO of the JSE. She led Africa’s biggest stock exchange during a tumultuous time in SA’s history. However, while she accepted that she was the public face of capitalism, one senses that promoting the capitalist agenda and running a business for profit is not, and has never been, her primary agenda.

Nicky Newton-King’s tenure as CEO of the JSE overlapped that of Jacob Zuma’s as president of the ANC and of South Africa. Rebuilding relations between business and government, which had been neglected during the Thabo Mbeki era, had become a priority during Zuma’s scandal-ridden era. Newton-King did not advance the charge for capitalism swinging a sword, astride a magnificent steed. But she did display leadership with a quiet strength and steely resolve that was not often seen during that time.

In October 2015, Newton-King received a memorandum from EFF leader Julius Malema outside the Johannesburg Stock Exchange in front of thousands of EFF marchers. Ahead of the handover, Malema said of her and the JSE: “You are so racist, you do not even belong to South Africa.”

Accepting the memorandum in front of the EFF supporters was a courtesy that government officials seldom afford those who disagree with them violently.

She does not regret the move:

“It is an event that is seared into my memory.”

South Africa’s political environment was becoming toxic: the scandals in Zuma’s presidency just kept coming; the #FeesMustFall protests had broken out and the Bell Pottinger project was under way. This promoted the claim that the white establishment — apparently funded by the Oppenheimers and the Ruperts — had hatched a plan to keep the nation’s finances under their control.

“The JSE is in a unique position and we needed to demonstrate that business could and should listen to the economically marginalised. It is not only in South Africa – Occupy Wall Street and boatloads of desperate refugees are an indication that people are feeling marginalised around the world. When you sit at the top of the capitalist Christmas tree it is important to rattle a few cages from time to time.”

Since then, business has found its voice, but, she says, there is a long way to go before the parties pull together in support of one single economic priority – job creation and economic growth.

Rattling cages is something that Newton-King has never been afraid of. After her appointment as CEO of the JSE in 2012 (she was the deputy to Russell Loubser for eight years), she took the decision to halt a six-year project to replace the JSE’s back-office system. It meant a R400-million write-off.

“It was too complex and was consuming too much corporate energy. Sometimes as a leader you have to create the space for people to think differently.”

Since then Newton-King has embraced technology, with the JSE investing R3-billion in upgrading its technology and trading platforms. While the exchange has never been ahead of global trends, it has kept pace, with IT projects delivered on time and on budget.

What the JSE’s technology investment has not done is drive innovation up and costs down. Its cost to income ratio is one of the highest globally. High costs were easier for investors to accept in the days when emerging market trade inflows were strong and competition was scarce because profits were healthy.

Since then the spectre of competition has loomed and the JSE has cut its pricing consistently over the past five years. Couple this with slow volume growth – compound annual growth in volume traded on the exchange has been 2.3% per year since 2012 – and it is not surprising that profits have waned.

In the six months to June, headline earnings fell 29% from the same period in 2018. Management mostly attributed the decline to net foreign sales of R30-billion during the period, relative to net foreign purchases of R17-billion in the comparative period, but investors were not overly impressed.

The chart below shows the JSE’s total returns (which include dividends) over the last eight years in comparison with other listed stock exchanges. 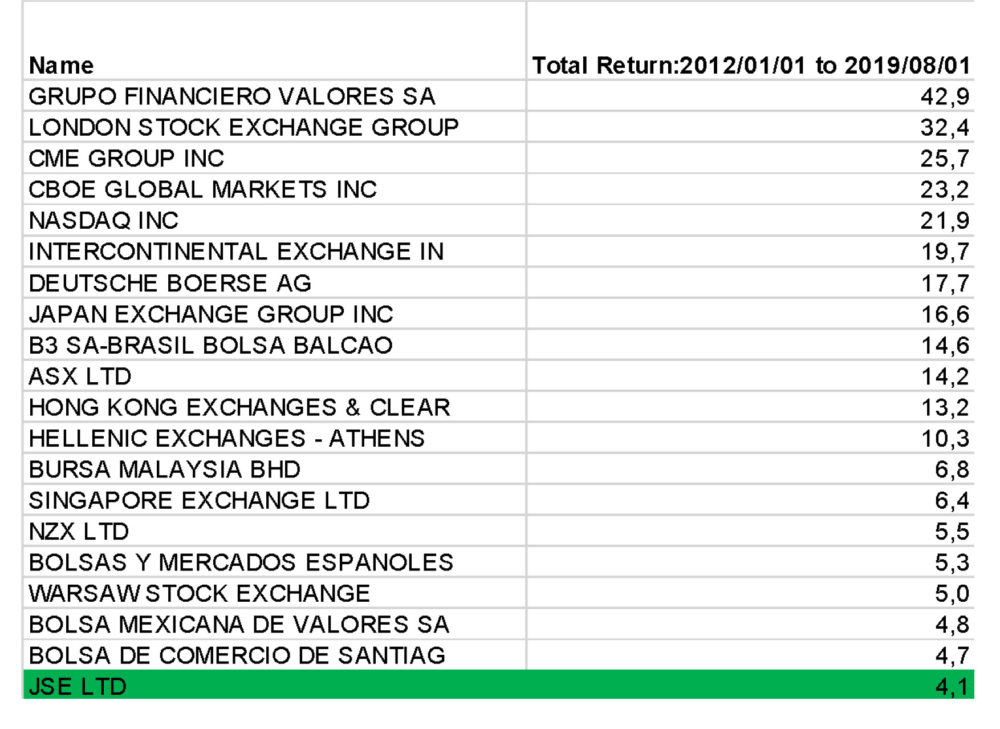 Newton-King is unapologetic about the fact that the JSE has not delivered returns commensurate with other listed stock exchanges.

“We have returned over R3-billion of dividends in eight years. We have declared special dividends when we can, and we have maintained a progressive dividend policy. Not once has it gone in the wrong direction. Shareholders have done well.”

It is worth noting that the JSE’s stated business philosophy is to make healthy profits, but not super profits. Newton-King is specific about this. It is also something shareholders cannot argue with because no shareholder can hold more than 15% of the JSE without regulatory approval.

In her role as CEO, Newton-King became an eloquent ambassador for South Africa, accompanying government officials on investment conferences abroad. Of course, this was driven by enlightened self-interest – slow economic and investment growth will impede the growth of the JSE. But her actions are also driven by her deep-seated belief in the future of South Africa. She is an unashamed optimist.

As such she has championed BEE transformation – both internally, within the JSE, and externally, through its role as a regulator of its listed companies.

The gender profile at the JSE is skewed towards women, while the race profile reflects a 70% weighting in favour of skilled black employees.

This is an achievement that Newton-King can justifiably feel proud of.

Where she is not universally applauded is the tricky subject of regulation. A raft of new financial regulations has come into effect recently, adding to the regulatory and compliance burden of listed companies.

Much of this is driven by the Financial Sector Regulation Act and amendments to the Financial Markets Act. However, the JSE has added to the regulatory burden by proposing changes to its own listing requirements.

“There is a fixation with corporate governance and compliance and the JSE is driving this,” said Piet Mouton, CEO of PSG at the company’s AGM recently.

“You spend hours at board meetings dealing with policy when you should be talking about how to grow the company. It creates an impression of good corporate governance. But good governance is a culture and no amount of box-ticking will change this.”

The collapse of Steinhoff in December 2017 is a case in point. As was the case with Enron and other scandal-ridden corporations over the years, Steinhoff appeared to comply with all legal and listing requirements in its various jurisdictions, which created a false sense of security for investors and other stakeholders. It ticked most (but not all) of the governance boxes as this analysis by several academics from the University of Stellenbosch Business School reveals.

The ensuing fallout is also seared in Newton-King’s memory. She believes the criticism of the JSE for not “seeing this coming”, was unfair. “As a regulator, we cannot place a commercial view on the validity of a business model. What we can do is set listings requirements at the right level.”

What this level is, is open to much debate. Regulation, compliance and governance are matters that Newton-King is happy to grapple with – she is a good lawyer after all. But questions remain about the integrity of the system. Is tightening corporate governance rules the best way to defend investors against rogue management teams?

There is an argument that the JSE has been too soft on transgressors, and too slow to react when issues are pointed out. When last was a director publicly censured for trading in his or her company’s shares days before the results come out? And when are we likely to see a successful insider trading prosecution?

The substantive allegations of insider trading at Oakbay Resources came to nothing (technically the JSE is only the investigator, while the Financial Sector Conduct Authority is responsible for prosecution). And it was only after a storm of protest that the listing of the patently unlistable Sagarmatha Technologies was cancelled on a technicality.

It is hard to fault Newton-King’s passion for the JSE. Arguably this was simultaneously her strength and fault. She became inwardly focused, involving herself in detailed work best left to others, while not paying attention to driving the organisation harder and faster in order to achieve the strategic goals that had been set.

The JSE aims to be the best emerging market stock exchange by 2022 and it has the technology, people, and arguably the regulation to get there.

But to achieve its goals, it was time for Newton-King to step down. It takes courage to recognise that leaders, even good strong ones, have a season. And when the season is done, someone else with different qualities and skills is required to navigate the next season. BM