AN OPEN LETTER TO UCT

The hidden history of Arab slavery in Africa, and why UCT should not ignore it 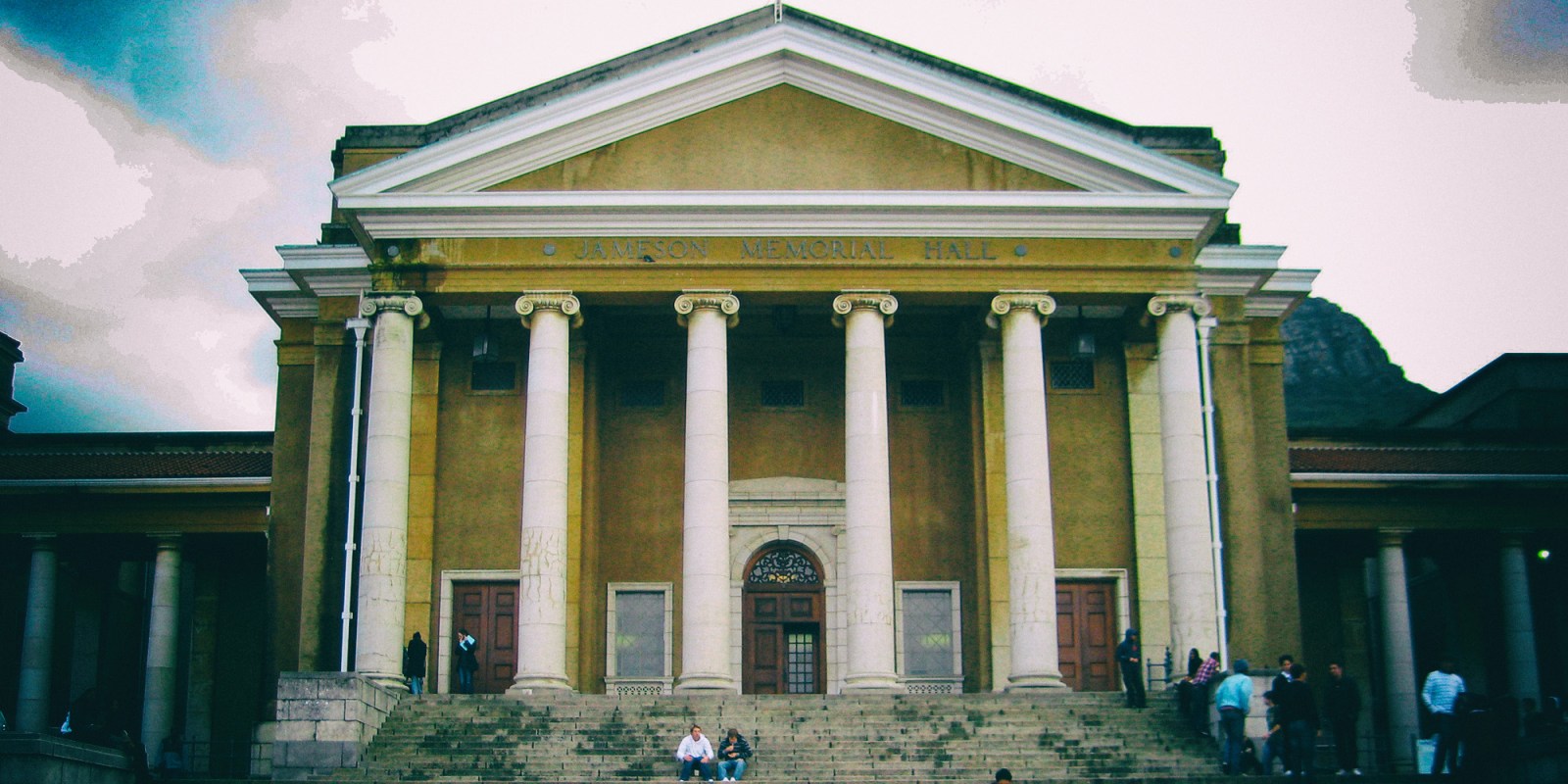 The University of Cape Town has invited a speaker to deliver the TB Davie Memorial Lecture on Academic Freedom in terms of the ‘conditions of humanity “in the midst of brutal inequality”.’ Salaita has written about ‘anti-Arab racism’ but has not significantly addressed the ‘brutal inequality’ of a millennium and more of the Arab slave trade, says the writer. (Photo: Toni QED / Flickr)

The most important historical relation between Arab society and the black people of east and southern Africa was the Arab slave trade, which continued for well over 1,300 years and developed into the Islamic slave trade.

I find inconsistency and hypocrisy in the University of Cape Town’s invitation to the US academic Dr Steven Salaita to deliver the TB Davie Memorial Lecture on Academic Freedom on Wednesday 7 August 2019 under the banner: “The inhumanity of academic freedom”.

The University has stated that during Salaita’s address, “He will explore academic freedom in relation to the conditions of humanity ‘in the midst of brutal inequality’. He will argue that academic freedom is a myth, prioritised over the political movements it is meant to protect.”

I see online that Salaita’s published works include Anti-Arab Racism in the USA: Where it Comes From and What it Means for Politics (2006), Arab American Literary Fictions, Cultures and Politics (2007) and Modern Arab American Fiction: A Reader’s Guide (2011).

Yet the most important historical relation between Arab society and the black people of east and southern Africa was the Arab slave trade, which continued for well over 1,300 years and developed into the Islamic slave trade, with the enslavement of pantheistic non-believers (kuffar) endorsed by the Qur’an. This began nine centuries before the Atlantic slave trade of black people from the west coast of Africa by white, Christian Europe, and it continued after the Atlantic slave trade had been ended by the white, Christian societies.

According to Alastair Hazell, in his study, The Last Slave Market: The Incredible Story of John Kirk: The Man who Ended the East African Slave Trade (Constable, London, 2011), “The tentacles of the East African slave trade penetrated deep into the Asian continent, reaching Muscat and the Gulf ports of Ras al Kymah, Dubai, Bandar Abbas, Bushire and Basra. The slaves were bought and then sold down long chains of brokers, dealers and merchants, into the heart of Persia and present-day Iraq… The trading dhows went up into the Red Sea at Jidda, from where slaves were taken overland to the holy cities of Mecca and Medina, and even farther into northern Arabia. Slavery was ancient, and throughout the nineteenth century it continued to be widely practised across the whole landmass covering Arabia, Turkey and Persia – and wherever there were slaves, significant numbers often came from Zanzibar and the Swahili coast.”(pp.135-36)

Either this account is accurate or it is not accurate. If it is accurate, surely it should be taught at the University of Cape Town. If there are inaccuracies, these should be set out in scholarly research. Not to do so implies that, according to UCT, there were two radically different slave trades in black African people: the Atlantic slave trade (bad), the Indian Ocean slave trade (good – or it never existed).

For UCT, the matter is even worse than that.

One of the most eminent authors, journalists and editors among the alumni of UCT was Ronald Segal (1932-2008), who graduated in 1951 and was later banned by the apartheid regime. I’ve posted Ronald Segal’s Wikipedia entry below, including a list of his published books. Among the authors whom Segal published in London as founder and director of the Penguin African Library series were writers banned in South Africa, including the Rivonia trialist Govan Mbeki (The Peasants’ Revolt, 1964, about the Intaba uprising among the amaMpondo), Ruth First (murdered by the apartheid regime, South West Africa, 1963, and 117 Days, 1965, about her very long detention and interrogation), and the study by one of the university’s most illustrious teachers, Professor Jack Simons and his trade unionist wife, Ray Alexander, Class and Colour in South Africa 1850-1950 (published by Segal in 1969).

A number of other studies relating to South Africa were also published by Segal in the widely accessible Penguin series, several of them banned by the apartheid regime.

Its subject matter extends southwards to northern Mozambique. The name “Mozambique” itself derives from the name of the Arab sultan of the Island of Mozambique (Ilha de Moçambique), Ali Musa Mbiki (Musa Bin Bique), a slave-owner who was ruler of the island when Vasco da Gama, the first European navigator to reach the east coast of Africa, landed there in 1498. There is now a Universidade Mussa Bin Bique (Mussa Bin Bique University) in northern Nampula province, founded in 2010.

According to Segal’s research concerning the coastal strip of Kenya, “When slavery was abolished there in October 1907, courts [in the then British colony] were instructed to inform slaves that they might leave their owners, who needed to prove any corresponding loss if they were to qualify for compensation. In the event, many slaves simply abandoned their owners or remained only after negotiating new conditions of labour.” (p.192)

Following the merging of the former Tanganyika with the island of Zanzibar, the name of modern Tanzania itself incorporates the history of Arab slavery from the word “Zanj”, derived from the name for black people enslaved from that region and taken to Arab countries and Iran.

As Segal writes, “There is enticing evidence that black slaves from the coastlands of modern Kenya and Tanzania, the so-called Zanj, were imported in the early centuries of Islam for labour in the sugar plantations in Khuzistan [in the south-west of Iran, near Basra in Iraq]. And the success of the late-ninth-century Zanj rebellion in spreading from Iraq to Persia, where it captured the province of Ahwaz, was due to a large number of labourers who were disaffected by work and living conditions on the sugar plantations there.” (p.121)

The University of Cape Town has invited a speaker to deliver the TB Davie Memorial Lecture on Academic Freedom in terms of the “conditions of humanity ‘in the midst of brutal inequality’.” Salaita has written about “anti-Arab racism” but has not significantly addressed the “brutal inequality” of a millennium and more of the Arab slave trade.

How is there academic integrity in that? DM

According to Wikipedia, Ronald Michael Segal (14 July 1932-23 February 2008) was a South African activist, writer and editor, founder of the anti-apartheid magazine Africa South and the Penguin African Library.

Segal was born on 14 July 1932, into a rich South African Jewish family. He was educated at Sea Point Boys’ High School. After failing to gain entry to Oxford University, he studied at UCT and then Trinity College, Cambridge. Returning to South Africa in 1956, he founded the anti-apartheid magazine Africa South. After the 1960 Sharpeville Massacre, he went into exile with Oliver Tambo, and settled in England, continuing his anti-apartheid political activity and pursuing his activity as a writer. Segal’s best-known work is The State of the World Atlas (1981), which he co-founded with Michael Kidron, who shared most of his political views.

After Segal was unbanned from South Africa, he visited the country several times, receiving a hero’s welcome on stage alongside Mandela, Tambo and Slovo in 1992. He died on 23 February 2008.

Born in Johannesburg in 1941, Paul Trewhela worked in underground journalism with Ruth First and edited the underground journal of MK, Freedom Fighter, during the Rivonia Trial. He was a political prisoner in Pretoria and the Johannesburg Fort as a member of the Communist Party in 1964–1967, separating from the SACP while in prison. In exile in Britain, he was co-editor with the late Baruch Hirson of Searchlight South Africa, banned in South Africa. He is the author of Inside Quatro (Jacana).