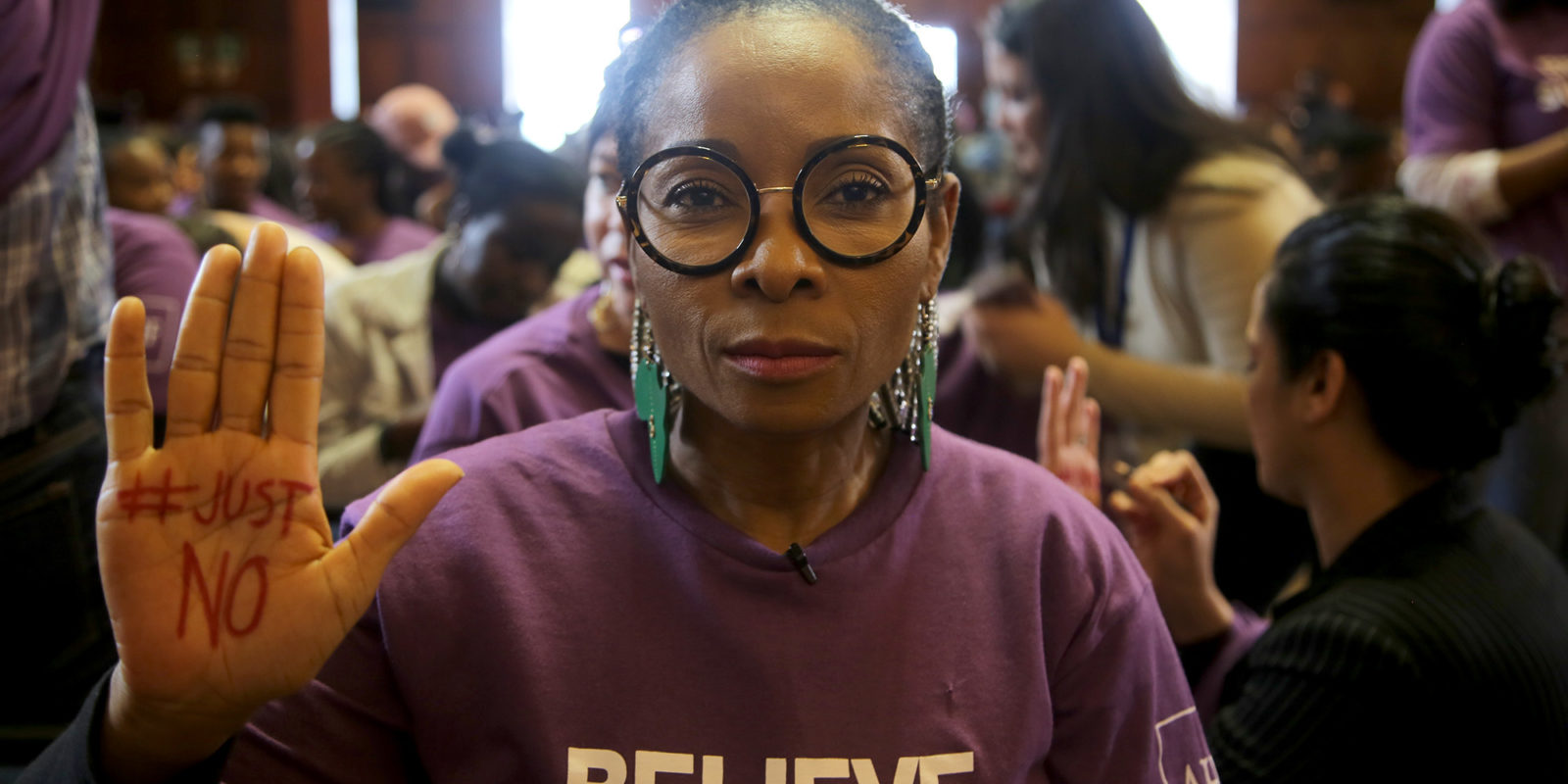 Hundreds of UCT students, staff and others banded together to stage a silent protest against gender-based violence (GBV), an epidemic that has caused the deaths of women, children, gender non-conforming persons and members of the queer community in South Africa. They say that enough is enough.

“The first time I experienced gender-based violence was when I was 18, and I was raped by my best friend,” said a University of Cape Town (UCT) student whose identity has been concealed.

This was during an open-mic session at the university’s Sarah Baartman Hall (formerly Jameson Hall) which concluded a silent protest against gender-based violence at UCT’s upper campus on Friday 2 August.

“The second time I experienced it, my mom and I were hijacked and raped,” she continued.

“The third time,” she said, “was when I was at Wits in my second year and I was raped on campus and I fell pregnant with my son, whom I kept.”

But her encounters with gender-based violence did not end there. The fourth time she underwent a series of assaults was during an abusive relationship, where her partner threatened to “burn her alive” while she slept.

“…and I believed that he would because I had seen how violent he was.”

She was one of the few who didn’t cry or become emotional as she shared her tale of personal trauma.

The sea of purple shirts at the gathering, which included a majority of female students and staff and some men, marched in silence around the campus as a siren rang intermittently. Some held placards that read “we believe you”, others said, “What part of ‘no’ don’t you understand?” Each person’s mouth was taped shut to symbolise the silencing effect of GBV.

“Silencing has a real effect. It takes people’s lives,” said Larissa Klazinga, the AIDS Healthcare Foundation’s (AHF) regional policy and advocacy manager, during a briefing session before the march began.

The AHF is a global non-profit HIV healthcare provider, which organised the protest alongside UCT’s Office of the Vice-Chancellor, the Office for Inclusivity and Change (OIC), Student Wellness Services and the Sexual Assault Response Team (SART).

“The purpose of this (protest) is also talking about HIV and the parallel epidemic of HIV and gender-based violence. People keep talking about South Africa as the rape capital of the world. It’s also the country that has the highest number of people living with HIV in the world,” said Klazinga.

According to crime statistics for the 2017/2018 financial year, police recorded 40,035 rapes — an average of 110 rapes daily. However, gender-based violence is not limited to rape, it branches out to various forms of physical, sexual, emotional, financial and structural violence which are attached to society’s normative ideas of gender roles.

South Africa has about 7.52 million people living with HIV, according to Statistics SA’s 2018 population estimate. For adults aged 15-49 years, an estimated 19% of the population is HIV-positive.

Klazinga says consent is at the core of the parallel epidemic of HIV and gender-based violence in South Africa.

“If you can’t negotiate condoms, if you’re not consenting to sex, you’re more likely to be exposed to the virus,” she said.

“Gender-based violence is a terrible reality on our campus as it is in our society. It is an enormous challenge and affects the lives of our students and staff profoundly,” said Phakeng.

She urged students to seek help if they have experienced gender-based violence and to contribute to ending rape culture on the campus.

“I want to challenge you to make a change happen. We have a long way to go (as a university), but some of the changes we’ve made are important. They include developing an accessible reporting system that will cope with the needs of survivors. We work hand in hand with external reference groups such as the Rape Crisis Centre, the Victoria Hospital Forensic Unit and SAPS, who form the Sexual Assault Response Team.”

Students are able to call the OIC on their 24-hour line or report cases on their online portal.

After the march, participants staged a “die-in” during which they lay on the ground to symbolise the statistics on gender-based violence.

“We forget that those numbers are real people,” said Klazinga.