Don’t be fooled: Know your rights when staging a protest 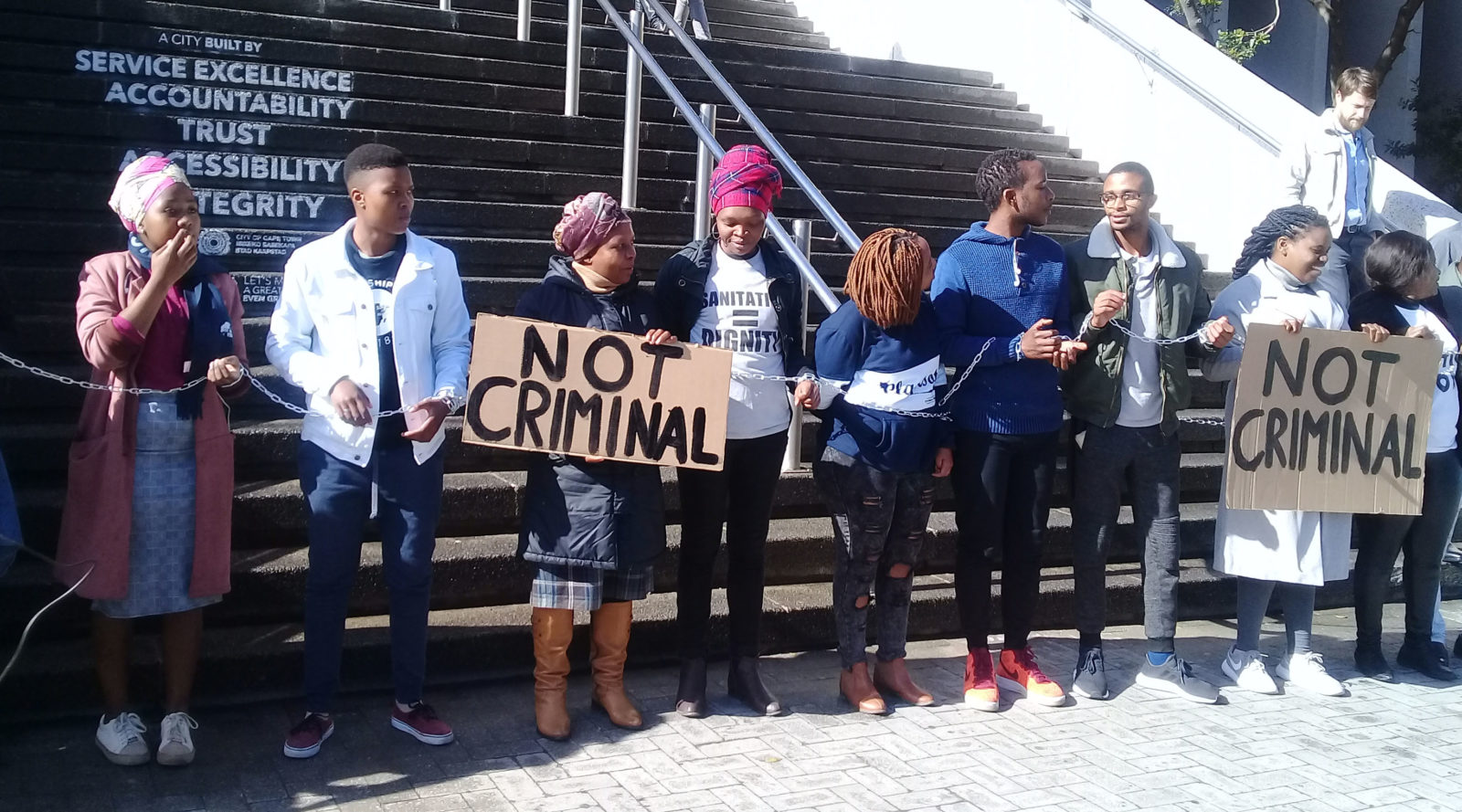 On 17 August 2018 at the Civic Centre, Cape Town. the Social Justice Coalition, Right2Know and Equal Education re-enact the arrest of the SJC10 in 2013. (Photo: Hlumela Dyantyi)

A recent court ruling on staging protests has been misinterpreted by protesters and some municipalities.

Since the Social Justice Coalition won a hard-fought court battle in November 2018 with a ruling that it was no longer a criminal offence to fail to notify authorities of a protest, there has not been enough clarity on what the correct and legal procedure is.

The ruling does not mean that protest organisers are exempt from notifying the authorities, only that failing to do so is no longer a criminal offence.

But some municipalities have continued to misapply the Regulation of Gatherings Act (RGA), interpreting the current state of play as they see fit, often placing insurmountable hurdles in the way of communities wishing to protest within the law.

What the courts said

On 11 September 2013, Social Justice Coalition (SJC) members and supporters staged a peaceful and organised act of civil disobedience outside the offices of then Cape Town mayor Patricia de Lille, chaining themselves to the railings of the Civic Centre. This followed more than two years of attempted engagement with the mayor that had, according to the SJC, increasingly been met with broken promises, hostility, and refusals.

Twenty-one activists were arrested and charged with contravening the RGA. In February 2015, the 10 elected leaders (SJC10) who were identified as the convenors of the protest were convicted; the other 11 were acquitted. When the trial began the SJC10 admitted the facts and did not deny that the gathering took place, but argued that the RGA itself was unconstitutional and a remnant of apartheid.

Leave to appeal their conviction was granted in July 2015 in the Cape Town Magistrate’s Court. SJC argued that Section 12(1))(a) of the RGA limits the right to freedom of assembly as guaranteed by the Constitution. It criminalises a gathering of more than 15 people just because no notice was given and this is unconstitutional.

The case was heard in the Western Cape High Court in 2017.

On Wednesday 24 January 2018, in the Western Cape High Court, Judge TC Ndita delivered a landmark judgment in the SJC10 case that has major repercussions on the right to protest in South Africa.

Judge Ndita overturned the convictions of SJC10 activists. The historic judgment ruled that section 12 (1) (a) of the Gatherings Act is unconstitutional because it limits and criminalises peaceful protest.

The judgment stated: “The criminalisation of a gathering of more than 15 on the basis that no notice was given violates s 17 of the Constitution as it deters people from exercising their fundamental right to assemble peacefully unarmed…the limitation is not reasonable and justifiable in an open and democratic society, based on the values of freedom, dignity and equality…Section 12 (1) (a) of the RGA is hereby declared unconstitutional”.

The minister of police appealed the judgment to the Constitutional Court.

The Constitutional Court heard the SJC10 case on 21 August 2018. On Monday 19 November 2018 the court made a historic ruling that declared section 12(1)(a) of the Regulation of Gatherings Act (RGA) unconstitutional.

The unanimous judgment reads, “People who lack political and economic power have only protests as a tool to communicate their legitimate concerns. To take away that tool would undermine the promise in the Constitution’s preamble that South Africa belongs to all who live in it, and not only a powerful elite. It would also frustrate a stanchion of our democracy: public participation. This is all the more pertinent given the increasing rates of protest in constitutional South Africa lately”.

Section 12(1)(a) criminalised the failure to give notice for a protest of more than 15 people. This served as a major deterrent to protests, whereby people are less likely to protest due to the possibility of a criminal record – the harshest possible limitation on a right. This is a disproportionate punishment that is in conflict with Section 17 of the Constitution, the right to freedom of assembly.

The court found that there is no need to amend or replace section 12(1)(a), as it does not leave a legislative vacuum and the remainder of the RGA provides incentives for notice of gatherings. The court left it up to Parliament to decide on any revisions to the act, as it is the place of the legislature to do so.

As noted by the Constitutional Court, “South Africa’s pre-constitutional era was replete with draconian legislation that, in an attempt to preserve the apartheid political order, punished people for assembling when it did not suit the state.”

The SJC10 judgement was a big step forward, but some people have misunderstood the judgement to mean: “You no longer need to give notice for a gathering.” The law still says you must give notice, but failing to do so will no longer mean jail-time. In the wake of the judgment, the state will need to find a “softer” way of making sure people obey the requirement of giving notice (for example, a fine).

So, the next battles against protest violations must now move to municipalities where research has revealed that local officials are making up their own rules to declare protests illegal, such as demanding application fees, letters of permission and so on.

Former Right2Know organiser Murray Hunter believes that in the aftermath of SJC10, the state needs to make it much easier for protesters to get legal protection for protests, by removing all the bogus rules that municipal officials have put in place which make it harder for people to get petty officials to “recognise” their right to protest.

Hunter also believes that while many protesters may welcome the fact that this one act of civil disobedience no longer carries the threat of criminal prosecution, for people in more vulnerable situations, especially away from urban centres, the legal/practical framework around protest remains a fraught space.

“Simply having this part of the law on your side will, as always, offer only symbolic protection when police and government officials are a law unto themselves,” says Hunter. DM

For legal advice on organising a protest, call the Right2Protest Project’s toll-free hotline: 0800 212 111.