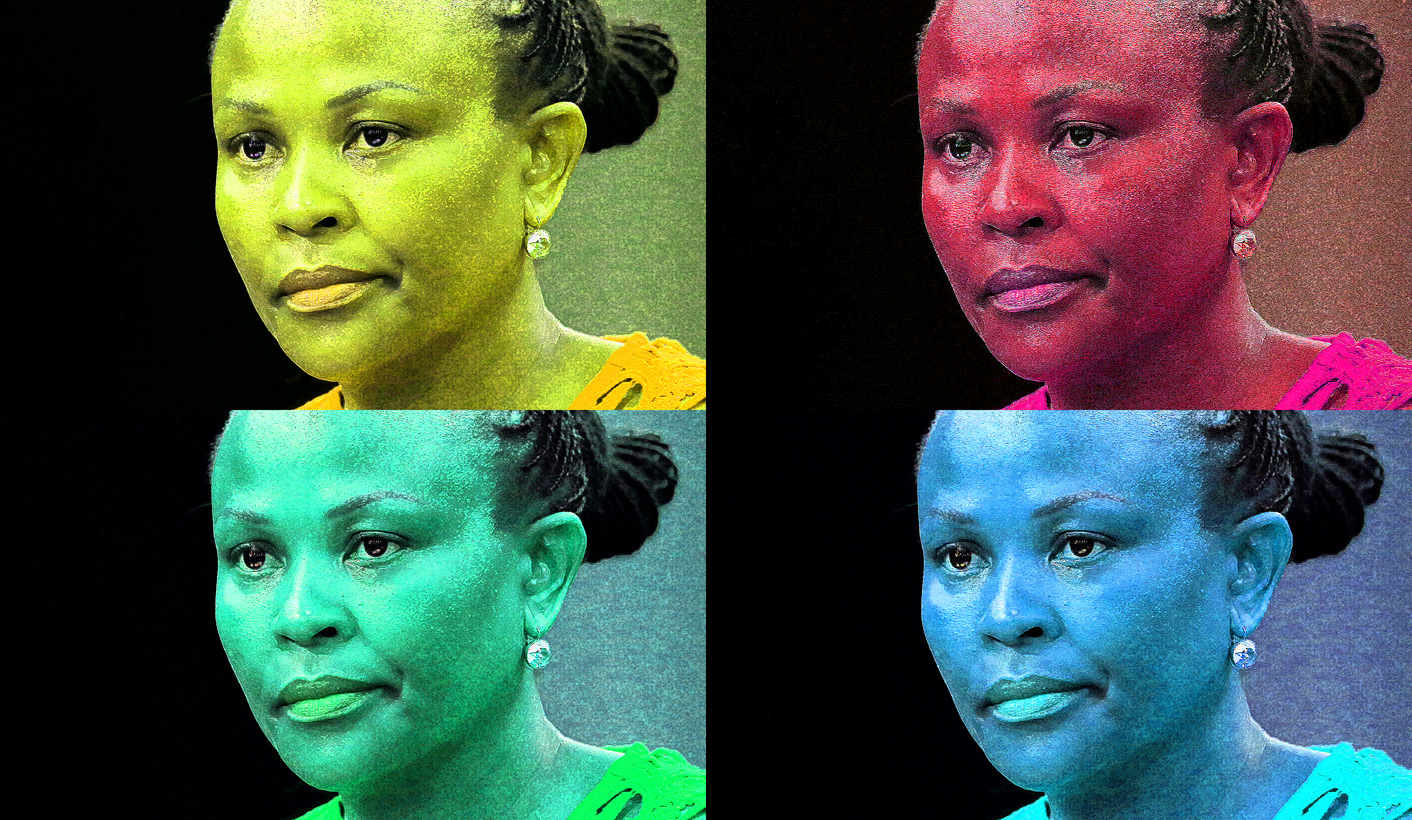 In the light of the recent judgments on the public protector reports, perhaps the fault lies with the type of training offered to SA law students — in terms of depth and quality, says the writer. Photo: Public Protector Busisiwe Mkhwebane listens during a briefing at Parliament in Cape Town

The truth is that there is nothing new with legal judgments and those who penned them experiencing a barrage of criticism. But the magnitude of the pointed flaws must be a matter of concern if we are honest in our reflection of the performance of judicial officers and similar functionaries.

The public protector’s decisions, as we all know, and I do not wish to belabour the point, have been found to be: vague and nonsensical; making no sense; a misdirection on the facts and conflation of the legal principles; amounting to bad faith or grossly negligent conduct; product of dishonest engagements and flawed investigation; suspect and contradictory intextuality; unintelligible (– that is, incoherent, inarticulate, incomprehensible); thrown together, with no discernible order.

And mostly these harsh critical pronouncements were made by the Constitutional Court in Public Protector v South African Reserve Bank [2019] ZACC29, and some reiterated in some shape or form by the North Gauteng Pretoria High Court.

The legitimacy of her decision-making processes has also been scorned from within by her own deputy public protector. The latter cried foul at not being consulted in the Public Protector v South African Reserve Bank [2019] ZACC29 case.

In brief, one can summarise the whole saga by stating that the public protector’s remedial actions and decisions, in general, have been attacked as lacking in thoughtfulness and neutrality, thus not giving “society as a whole reason to trust in the integrity of the system”.

“Much of the orders [of the Public Protector] are vague, contradictory and/or nonsensical.”

With 2,617 reactions by 3:39pm on 30 July 2019, surely this remains a topical issue? Lay persons, learned legal and political commentators have been gifted a voice and something to say across many public fora and media. Some of the questions on the lips of many of these commentators and scholars are whether the public protectors — in my view the entire office including the deputy public protectors and the investigators used — possess the necessary competence and experience to “take up their judicial duties immediately upon ascending” the Office of the Public Protector (OPP)? And whether the incumbent public protector and her deputy are fit and proper for the OPP responsibilities?

The truth is that there is nothing new with legal judgments, and those who penned them, experiencing a barrage of criticisms. But the magnitude of the pointed flaws must be a matter of concern if we are honest in our reflection of the performance of judicial officers and similar functionaries.

What came to my mind is the famous Da Vinci Code case by Mr Justice Peter Smith {Baigent & Anor v The Random House Group Ltd (The Da Vinci Code) [2006] EWHC 719 (Ch) (07 April 2006)}, which though upheld on appeal, received from Lord Justice Lloyd among others that “[t]he judgment is not easy to read or to understand. It might have been preferable for him to have allowed himself more time for the preparation, checking and revision of the judgment.”

That is, it was almost nonsensical to the reader. I would like to look at this differently and holistically, and invite reflection and debates on the recent negative judgments against the public protector beyond just commentaries on who won and who lost. And also to so reflect without getting into issues of law, precedent or other matters of general legal significance. Let us for once look at it from the point of the quality and the nature of our judicial training at both law faculties and the profession, and how these influence the outcomes of decision-making by our legal practitioners and judges.

Do our judicial officers, in general, have the required ability to always write coherent, logical, easy-to-read and reasoned judgments? Perhaps also let us throw into the mix of our debate the question: is critical legal thinking and legal reasoning addressed adequately by all our law faculties?

I found it befitting to refer to the below excerpt from an academic article entitled Writing Reasoned Decisions and Opinions: A Guide for Novice, Experienced, and Foreign Judges [pp93-94], which was published in the 2015 Journal of Dispute Resolution:

“Producing well-written reasoned judgments (a term that is used herein to denote both trial court decisions and appellate opinions) is the goal of all members of the bench. Badly written rulings can have significant legal consequences for both the parties, who may incur costs as a result of a need to appeal a poorly-worded decision or opinion, and society as a whole, since a poorly-drafted precedent may drive the law in an unanticipated and unfortunate direction or lead to increased litigation as individuals attempt to define the parameters of an ambiguous new ruling.

“As a result, helping judges write decisions and opinions that are coherent and clear would appear fundamentally important to the proper administration of justice. Good judicial writing is vital in common law countries like [South Africa], where the principle of stare decisis gives legal opinions the force of law.”

Much of this article by IS Stone was written while serving as a US Supreme Court Fellow. A number of issues addressed in this article by Stone resonate with the whipping of the Public Protector Busisiwe Mkhwebane by the Constitutional Court and the North Gauteng High Court regarding the quality of the contents of the reports issued, and the legal nature of the remedial actions directed by the public protector.

If I was the incumbent in the OPP (who by the way is to be regarded as having some form of standing similar to that of other judicial officers such as judges), I would surely ask a question: What is a reasoned and not nonsensical report and remedial action? There is no hard and fast rule or guideline for the correct answer, but in my opinion, the following attestation makes sense and speaks to what the judgments against the Public Protector expressly and impliedly regarded as missing in her reports in question:

First and perhaps most importantly, use of reasoned judgments improve the decision-making process, thereby improving the quality of the decision itself. As Judge Richard Posner has noted, “[r]easoning that seemed sound when ‘in the head’ may seem half-baked when written down, especially since the written form of an argument encourages some degree of critical detachment in the writer, who in reading what he [or she] has written will be wondering how an audience would react.”

By encouraging judges to articulate their reasons for following a particular course of action, reasoned judgments help “rationalise the… process,” “safeguard against arbitrary decisions,” “prevent consideration of improper and irrelevant factors,” “minimise the risk of reliance upon inaccurate information,” and “attain… institutional objective[s] of dispensing equal and impartial justice” while simultaneously “demonstrat[ing] to society that these goals are being met.” (Stone 2015:104)

From the legal academy point of view, my perspective and input would go back to what the Council on Higher Education once said about our legal education and the positive and/or negative role all law faculties in South Africa have played in producing competent graduates with the necessary clinical expertise — be it through practical and/or simulated means.

Perhaps the faultiness lies with the type of training we offer to our law students — in terms of depth and quality. And I must quickly counter-say any reaction that will begin to engage in this reflection with a tired temptation of battering previously disadvantaged universities and praising international rating as a panacea for the problems law faculties and other training institutions are facing.

Have we ever thought of an LLB degree with 24 core modules or 30 modules inclusive of electives/specialisations instead of 40-plus modules in order to allow utilisation of more time for sharpening the skills of our students? DM

Professor Omphemetse S Sibanda Snr is a full Professor of Law in the Department of Public and Environmental Law at the School of Law Faculty of Management and Law, University of Limpopo.