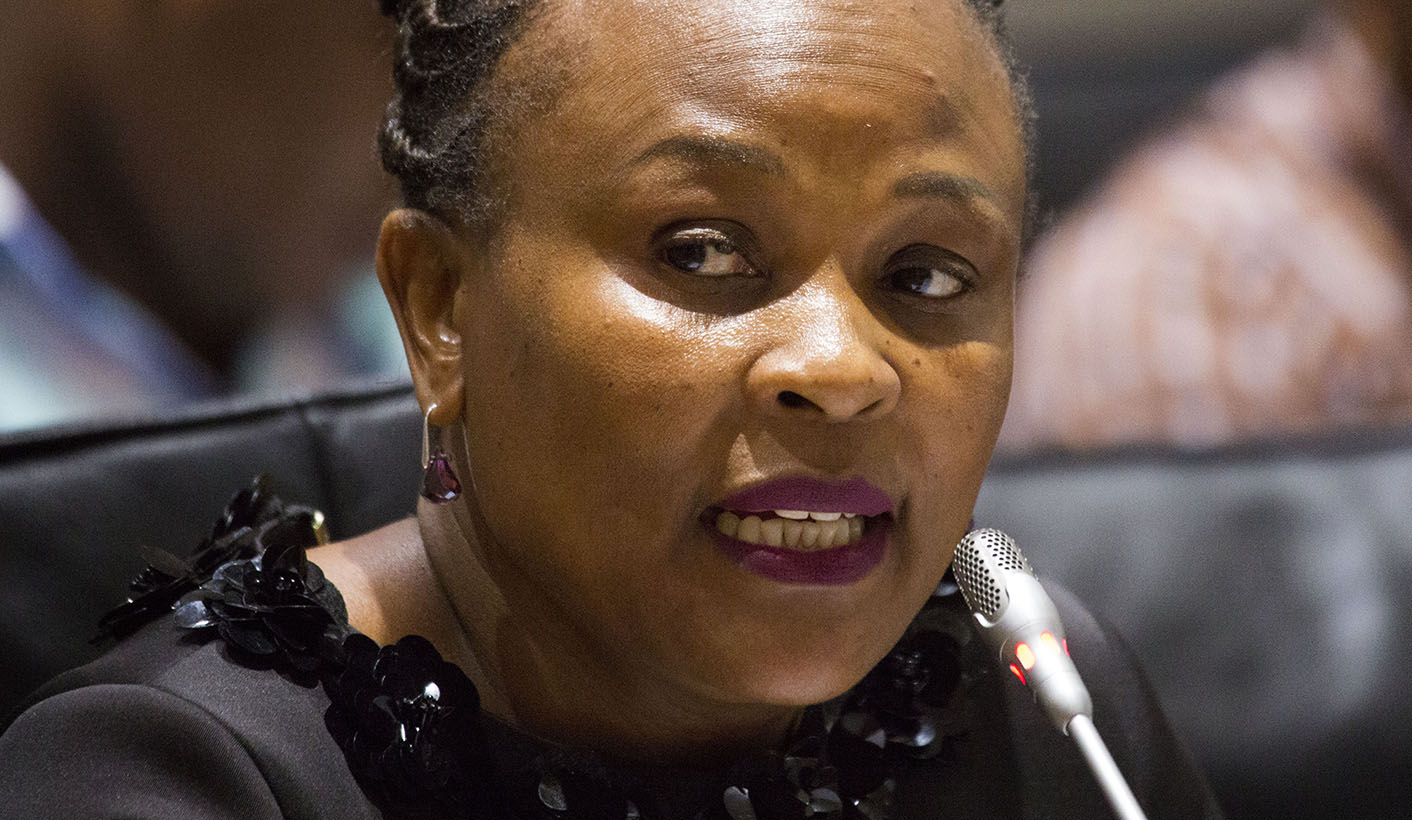 As if she doesn’t already have a mountain of challenges to climb, Public Protector Busisiwe Mkhwebane has had another finding challenged on legal grounds. And this time it doesn’t seem to have anything to do with Pravin Gordhan or Cyril Ramaphosa.

JSE-listed horse racing and betting operator Phumelela Gaming and Leisure has launched an urgent application in the Pretoria High Court to interdict Busisiwe Mkhwebane from forcing the company to implement sweeping remedial action contained in a report released by the Public Protector in May 2019. The report is under review.

In its heads of argument, Phumelela sets out that the Public Protector has overstepped her legal mandate and has violated the notion of the separation of powers by ordering the enactment of legislation which is the exclusive domain of Parliament and the National Council of Provinces.

In her final report titled “Allegations of Maladministration and Improper conduct in connection with a Memorandum of Understanding entered into between the Gauteng Provincial Government and the Gauteng Horse racing Industry in 1997 which subsequently led to the Corporatisation of the Horse racing Industry”, Mkhwebane ordered, says Phumelela, “far-reaching and patently unlawful remedial action”.

This included requiring the president to establish a statutory body to regulate horse racing in South Africa, which would require the passing of legislation and the allocation of a budget for the new body.

Over and above this, the Public Protector ordered the Minister of Trade and Industry to lead the process of the establishment of the body and to consult with industry stakeholders and players. Her remedial action also requires premiers of every province to “capacitate” the new statutory body as well as withdraw the bookmakers’ levy currently being paid to Phumelela.

This would require amendments to existing provincial legislation. The Public Protector also required the Gauteng Gaming Board to recover money from Phumelela.

The Office of the Public Protector’s investigation into the horse racing industry began in 2012 when the then Public Protector, Thuli Madonsela, received a complaint from the Africa Race Group (Pty) Limited, claiming maladministration and improper conduct as a consequence of a 1997 Memorandum of Understanding (MOU) between the horse racing industry in Gauteng and the Gauteng Provincial Government.

The MOU set out an agreement between the industry and government that resulted in the reorganisation and restructuring of the industry. Back in 1995, then Gauteng MEC for finance Jabu Moleketi had announced the intention to privatise and corporatise the horse racing industry.

Phumelela, in June 2002, was subsequently incorporated as a public company listed on the JSE and serving as the company to which all assets and liabilities of the Gauteng clubs, the Tote Agency Board, the Highveld Racing Authority as well as the grant obligations and part of the cash holdings of the Horse Racing Development Fund were transferred and held.

A second complaint was lodged with the Public Protector, also in 2012, by the South African Grooms Association alleging ill-treatment and the misappropriation of public funds earmarked for grooms’ quarters.

In 2013 a member of the Gauteng Gambling Board’s horse racing committee lodged a third complaint, alleging that there had been no transformation in the horse racing industry, a condition that was a violation of the 1997 MOU.

In March 2018, Mkhwebane alerted Phumelela’s legal representatives that her office intended to investigate the matter by holding public hearings. In August 2018 the Public Protector released a media statement via her official Twitter account that evidence from the complainants would be recorded at these public hearings.

In March 2019 Mkhwebane informed Phumelela that her office was issuing a provisional report. Phumelela’s legal team, in turn, responded that it was entitled to records or documents that had been used in support of any preliminary findings she had made.

On 6 May Mkhwebane issued her final report, whereupon Phumelela informed the Public Protector that it was taking the remedial action on review.

In light of this, said Phumelela, it would be inappropriate to act on the Public Protector’s remedial action until the final determination of the review. The review application by Phumelela was filed on 21 June 2019.

On 16 July Mkhwebane wrote to Phumelela stating that the remedial action was to be implemented and that a failure to do so would be “actionable”.

The company then requested the Public Protector to suspend the remedial action pending the outcome of the review in order to avoid “the institution of urgent proceedings”.

She further directed that all remedial action had to be finalised by 6 November 2019.

Phumelela argues that the enactment of national legislation is within the exclusive domain of Parliament and the establishment of the statutory body envisaged by the Public Protector in her final report would require the introduction and passing of a Bill to achieve this.

“Accordingly, the authority bestowed upon Parliament cannot be limited in any way except by the Constitution.”

The National Assembly and the National Council of Provinces were vested in terms of sections 55(1) and 68 of the Constitution, with the exclusive responsibility to consider, pass, amend or reject legislation and to initiate or prepare legislation.

“It is therefore only the National Assembly and National Council of provinces who may pass legislation,” argued Phumelela.

The Public Protector’s remedial action, argues Phumelela, removed from Members of Parliament “their right and obligation to exercise an independent discretion in relation to voting on proposed legislation”.

It also potentially compelled members of Parliament “to vote against their conscience where they disagree with the Public Protector’s views and thus compels members of Parliament to breach their oath of office”. It also forced the legislature “to adopt legislation by circumventing the procedures stipulated in the Constitution for the passing of legislation”.

With regard to the “unlawful interference” with Provincial Legislative Authority, Phumelela said that the remedial action requiring the creation of a statutory body also violated the constitutionally prescribed division of legislative authority between the national legislature and the provinces.

“This is because ‘racing’ is a matter designated in Part A of Schedule 4 to the Constitution as being a functional area of concurrent national and provincial legislative competence.”

It pointed out that in terms of section 104(1)(b) of the Constitution, the legislative authority of a province is vested with the power to pass legislation for its province with regard to any matter within a functional area listed in Schedule 4.

“The remedial action prescribed by the Public Protector in relation to the establishment of a statutory body to serve as a ‘Regulator for Thoroughbred Horse-racing in the Republic’ strips each of the nine provinces of their legislative competence to pass legislation in relation to horse racing.”

Phumelela submitted that this was “patently unlawful and unconstitutional. In fact, the remedial action relegates all of the provinces to a subordinate role. They must ensure that the statutory body is ‘capacitated to enable it to perform its functions independently and without fear, favour or prejudice’ ”.

This meant that the provinces were required “simply to accept the statutory body imposed on them”.

“Their role is relegated to ensuring that it is ‘capacitated’. Their right to pass provincial legislation on ‘racing’ and matters reasonably necessary or incidental thereto is simply removed by the Public Protector’s remedial action.”

The Public Protector, in her final report, directed the premier of the Gauteng Provincial Government and all other provincial premiers to ensure that the 50% levy paid to Phumelela Gaming and Leisure (Pty) Ltd be withdrawn and transferred to the new suggested entity.

“Thoroughbred horse racing is licensed by and is conducted in six of the nine provinces in South Africa (Gauteng, Free State, Western Cape, Northern Cape, Eastern Cape and KwaZulu-Natal). Each of these six provinces is governed by its own provincial gambling legislation and the regulations thereto,” said Phumelela.

“In terms of each of these Provincial Acts, the responsible Member of the Executive Committee has the sole power, which is in some instances subject to various conditions contained in each of the Provinces’ legislation, to pass regulations prescribing the manner in which the bookmakers levy is divided.”

“In particular, the Public Protector cannot dictate amendments to legislation which require policy considerations relating to matters of taxation to be taken into account as well as a wide range of fact.”

“Again, this is not the first time that the Public Protector trod unconstitutionally and irrationally on Parliament’s exclusive authority and has required amendments to legislation,” said Phumelela.

Chief Justice Mogoeng Mogoeng, in his dissenting judgment, had in fact stated that Mkhwebane had “got the law completely wrong” and that her remedial action directing an amendment to the Constitution in the SARB matter “may rightly be criticised and dismissed as bereft of seriousness given the nature of intricacies of law making or constitutional amendment and Parliament’s functional independence”.

Phumelela said that the Public Protector “has plainly disregarded the two decisions handed down in the Absa litigation”.

“Remarkably, in a tweet, she attributed her defeat in the Absa litigation to ‘technicalities’. She makes precisely the same fundamental errors that our courts have held to be unlawful in these proceedings,” said Phumelela.

Over and above the grounds set out in the application for review, Phumelela also claimed that the Public Protector had violated its right to procedural fairness in failing to provide requested information or in affording the company an opportunity to question witnesses.

“The Public Protector relied on various material errors of fact in the conclusions that she reached and the remedial action that she prescribed. In particular, the Public Protector erred when she found that the grant allocated from the Horse Racing Development Fund has been misused by Phumelela; she records and relies upon untested and erroneous statements of third parties regarding the acquisition of assets by Phumelela and further, makes various erroneous statements herself in the report. These erroneous statements all relate to the false allegation that Phumelela acquired various assets during the corporatisation process at no cost or ‘for a song’.”

“The issue which the Public Protector found to be substantiated was lodged on 16 April 2012. The Public Protector has not provided sufficient reasoning or a single fact in support of any special circumstances which necessitated her exercising her discretion to deviate from the jurisdictional requirement contained in Section 6(9).”

Phumelela stated that it had “a reasonable apprehension that the Public Protector has not brought an impartial mind to bear on the adjudication of this case and has forfeited her independence”. DM