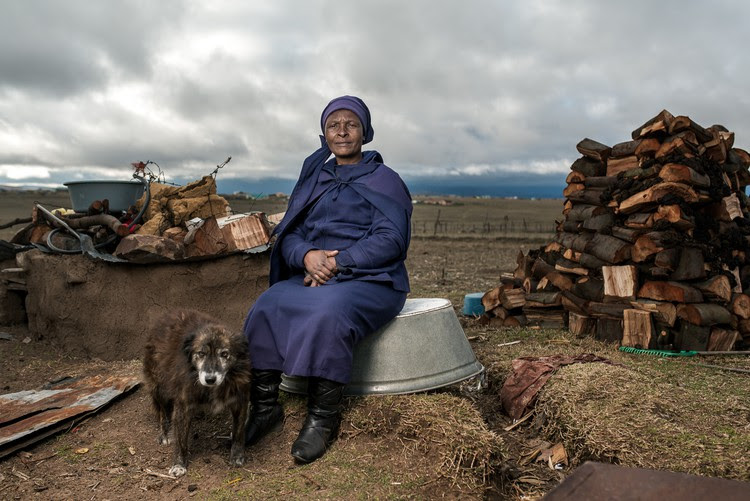 Primary image caption: Zwelakhe Dala died on 30 March 2015. He was 55 years old and suffering from silicosis. He worked on the gold mines for 28 years and received no compensation when he got sick. “It is too painful. If my husband was not working on the mines, he would still be alive.” says his wife, Nosipho (pictured). Photo: Thom Pierce

“This agreement can never make full redress for the loss and harm suffered by gold mine workers and their families and communities over the last 100 years,” says judge. By Tania Broughton

There was a lot of “give and take” from both sides, but the settlement agreement, which has resulted in a R5 billion compensation fund for gold miners afflicted with Silicosis and TB, was as near to perfect as possible.

“In the end, some people may get less than what they could, and others more. But when you are negotiating on behalf of anything between 100,000 and 500,000 claimants, we believe we came to the best conclusion,” the Legal Resource Centre’s constitutional law expert and settlement negotiator Carina du Toit told GroundUp.

The class action was given a judicial nod in May 2016.

While all 14 mining companies applied to the Supreme Court of Appeal for leave to appeal this ruling, the big six — African Rainbow Minerals, Anglo American SA, AngloGold Ashanti, Gold Fields, Harmony and Sibanye-Stillwater — decided to sit around the negotiating table with the lawyers for the claimants.

“There was some urgency,” du Toit said,

“Our clients are sick. Some have died already. I think they were starting to believe that they would never get compensation.

“But when we explained the details of the proposed settlement, they were happy.”

That settlement has now been made an order of court.

The agreement provides for the establishment of the Tshiamiso trust which will manage payments of between R70,000 and R500,000 depending on which of the four categories claimants fall into.

The Trust has been funded by the six settling companies. Their liability is unlimited but is presently guaranteed at R5 billion.

The Trust is obliged to identify and locate all eligible mineworkers and their dependents, some of whom live in other African countries.

Claims can be submitted over the next 12 years.

In the judgment handed down on Friday in the Gauteng High Court, Judge Leoni Windell, with Deputy Judge President Phineas Mojapelo concurring, said she was satisfied that the procedure followed had given class members ample opportunity to consider their stance and raise any objections.

Judge Windell noted that the definition of “settlement classes” had been amended to include not only underground mineworkers, but those who worked on the surface of the mine, such as in laundries, where they may have been exposed to excessive dust levels.

“This agreement can never make full redress for the loss and harm suffered by gold mine workers and their families and communities over the last 100 years as a result of the epidemic of lung disease that afflicted them, and the system of migrant labour and racial discrimination that sustained this epidemic,” the Judge said.

“It is therefore important to recognise that, as with all negotiated settlements, it represents a compromise between the parties and their competing interests.”

She said a key consideration during the negotiations were the issues of time and delay. Litigation could have taken between five and ten years.

“Many of the class members are elderly and unwell. During the last six years, 18 of the 56 class representatives have died.

“While we accept that litigating individual claims to conclusion is undoubtedly the best way to determine the exact value of each claim, there are many drawbacks to this approach.

“There is always the uncertainty of litigation.

“Another issue was a need to mitigate the risks associated with changes in the structure and fortunes of mining companies and the gold mining industry in general. Many mines have closed, often at huge cost to the workers.”

The negotiation process was described in an affidavit by mediator John Brand as “the most complex he had ever been involved in” with different companies, with different priorities and financial capacities on the one side, and five firms of lawyers representing tens of thousands of claimants, on the other.

Judge Windell said: “Mr Brand opines the settlement is innovative and is rated by many, both here and abroad, as one of the most complex mutli-party class action settlements in the world.

“I believe the negotiations wielded the best possible results.”

The non-settling companies are expected to still appeal the class action certification in the Supreme Court of Appeal.

Du Toit said if the class action was deemed lawful the matter would go into “full trial mode” firstly on issues of commonality and then to determine individual damages.

“I think those companies [the one’s appealing] are hoping we will run out of motivation … but we will persist,” she said. DM