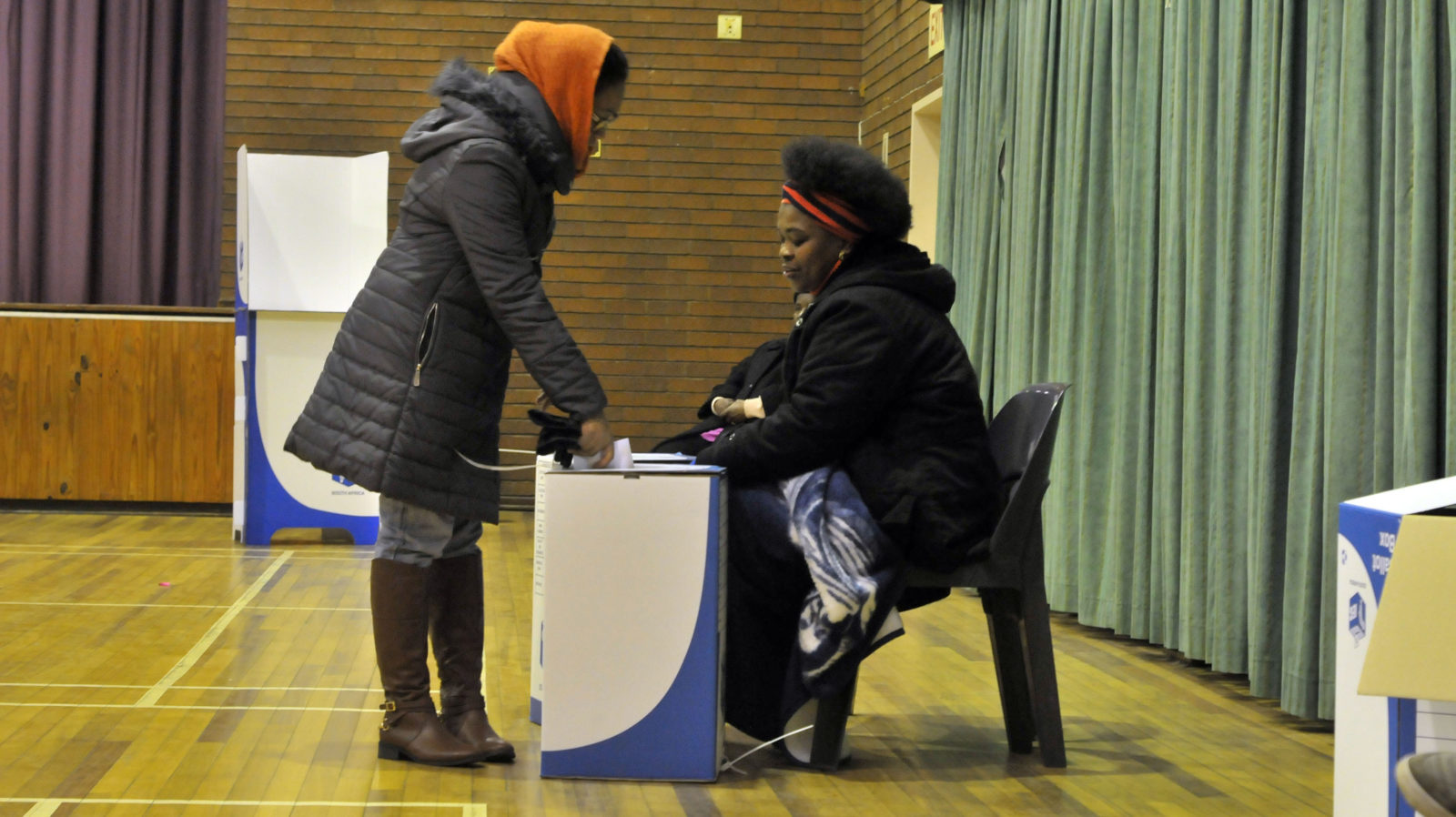 Archive Photo: A voter casts her ballot at a station in Blairgowrie Recreation Centre during the Local Government Elections on August 03, 2016 in Johannesburg, South Africa. (Gallo Images / Photo by Dino Lloyd)

The African National Congress picked up one of the two Democratic Alliance-held Johannesburg seats they targeted on Wednesday, but came short in the by-election in Midrand. Meanwhile in the town of Barrydale, in the Swellendam municipality in the Western Cape, the DA took a seat off the ANC.

The Democratic Alliance (DA) had to defend four seats in Johannesburg in the latest round of by-elections. Ward 59 is in the south of the city and its main areas are Mondeor and Ridgeway. Ward 83 is centred around Helderkruin in Roodepoort in the west of the city. Ward 109 is sandwiched between Sandton and Alexandra, and Ward 112 is in the far north of the city, encompassing Noordwyk and Halfway Gardens in Midrand.

Ward 109 includes the well-heeled suburbs of Morningside and Wendywood in Sandton, the informal settlement of S’swetla in Alexandra, Marlboro Gardens, Marlboro and Kelvin.

The African National Congress (ANC) had a convincing win over the DA in Ward 109. The ANC were able to win the seat from the DA by improving on their showing in the 2019 provincial elections in an area like Marlboro Gardens, where they effectively shut the DA out – an area which broke for the DA in 2016.

The ANC won 82% of the vote in Marlboro Gardens, with the DA getting 10%, giving the ANC a 667-vote advantage in the ward. The DA were unable to make up this difference. It is a staggering turnaround for the ANC in this voting district. In 2016, the DA won the voting district by 160 votes when they picked 45% of the vote, compared to the 36% of the ANC. If one paid close attention to the 2019 provincial results in the ward, it was clear that a shift had happened in Marlboro Gardens, with the ANC getting 650 more votes than the DA here. What makes this performance on Wednesday night even more astounding is that the ANC beat the DA here by more votes, when turnout was well down from the 2019 provincial election turnout.

The Nokothula Centre is the other Marlboro voting district in the ward. This is a district where the Economic Freedom Fighters (EFF) hurt the ANC in 2016, winning 22% of the vote; the EFF mirrored that showing in the 2019 provincial elections, but slipped to third place behind the DA in this by-election, only getting 11% of the vote.

The DA improved on their showings in strongholds like Wendywood and Morningside, getting between 89%-92% of the vote, but the subdued turnout in these districts was not enough to threaten the ANC’s gains.

The ANC will also be happy with their returns in the portion of the ward which includes the informal settlement of S’swetla in Alexandra. Turnout here was higher than the turnout in Wendywood and Morningside, and the ANC was able to take the voting district off the EFF. In 2016, the ANC got 46% of the vote here; on Wednesday night they got more than two thirds of the vote in the district, receiving 67% of the vote. The EFF fell from 47% to 27% in the district. The ANC had a 749 vote advantage over the DA in this district in the by-election, in 2016 they only got 610 more votes than the DA here, even though turnout in 2016 was more than double what it was in the ward during the by-election.

The by-election win for the ANC will spur them on as they hope to reclaim the city from the DA-led coalition government in Johannesburg in 2021.

Turnout was 26% (54%). That is a relatively low turnout for a closely contested by-election, but it is on par for by-elections in Metros.

Ward 112 is in the far north of the city in Midrand. It is an area of large-scale development which includes many townhouses and new building projects. It includes Noordwyk, Halfway Gardens, Carlswald and Country View.

If one had to use the 2019 provincial elections as a barometer for this by-election, you would have put good money on the ANC taking the ward off the DA. The ANC got 1,500 more votes than the DA in this ward in May. It turns out that the 2016 results were a better indicator for this ward than what transpired 10 weeks ago. The DA had a crucial, morale-boosting hold in Midrand.

This is best personified by the returns at the Brookfield Academy voting district in Noordwyk. In May the DA came third here, getting 23% of the vote while the ANC got 40% and the EFF 32%. In the by-election the DA got 41%, beating the ANC who received 39% of the vote, while the EFF ended up on 20%.

The ANC stronghold in the ward is in Country View. They got 47% of the vote here in May, up from the 37% they received in 2016, but could only match the 47% in the by-election. This is in contrast with the DA. The DA came third here in May, getting 22% of the vote; they received 37% in Country View on Wednesday night, matching their 2016 returns in the district. Incidentally, Country View had the highest turnout in the ward for the by-election, with 22% of registered voters showing up.

The DA again carried the voting districts in Halfway Gardens and Carlswald. The DA and the ANC shared the other two voting districts in Noordwyk, with the ANC taking the Noordwyk Secondary School district off the DA, getting 47% of the vote, up from the 29% they received in 2016. The DA fell here from 45% to 33% on Wednesday night.

Turnout was exceptionally low in this by-election, even by metro standards. It would be simplistic to conclude that because of the very low turnout, the DA prevailed here again. Turnout was highest in the two voting districts carried by the ANC. Turnout was lowest in the relative DA stronghold of Halfway Gardens.

This ward sits on the edge of the city in Roodepoort, next to Mogale City. Its principal suburb is Helderkruin, but also includes Roodekrans and Wilro Park.

In the lead-up to the 2019 elections, the Freedom Front Plus (FF+) gave the DA a major fright in two Krugersdorp by-elections in Mogale City, getting between 28% and 29% in the two by-elections. Those two wards are only a few kilometres from this ward.

The FF+ tends to do better when voters in a ward know that by voting for the FF+ instead of the DA, they will not hand the ward to the ANC. This again ran true on Wednesday night.

The DA got between 66% and 75% of the vote throughout the ward. They did best in Wilro Park, where they got three out of four votes in the district. This result will spur on the FF+ in Johannesburg and also give them much motivation for upcoming by-elections in Ekurhuleni, and Rustenburg.

Ward 59 is split by the N12 highway, with Ormonde and Ridgeway lying on the one side, and Mondeor and Winchester Hills on the other side. It is in the south of Johannesburg.

The DA had a comfortable hold in the by-election, getting between 74%-79% of the vote in Winchester Hills, Mondeor and Ridgeway. They also just won the Ormonde voting district, beating the ANC here by 3 votes. In May, the ANC beat the DA here by 459 votes on the provincial ballot. The DA will be very satisfied by this result.

The ANC pipped the DA here by 48 votes in 2016. The 2019 provincial results saw the DA win all three voting district in this ward. The DA swept all three voting districts in the by-election as they took this ward off the ANC. Over 70% of the voters in the ward are concentrated at the Fortshaven Hall voting district in Barrydale. The DA needed to win at Fortshaven to take the ward off the ANC. They got 191 more votes than the ANC here, getting 55% of the vote, compared to the ANC’s 45%. Turnout was very encouraging at Fortshaven Hall; 74% of registered voters showed up.

The DA will be delighted by this win, especially after their narrow victory over GOOD in George last week.

The next round of by-elections will be on 7 August when there will be 28 by-elections taking place. The DA will defend three marginal seats, two seats in Gauteng-Ekurhuleni, Rand West City and in Hantam in the Northern Cape. The ANC will defend a marginal seat in Jozini in KwaZulu-Natal. DM